BMW has celebrated half a century of its M division with numerous regional limited-run editions throughout this year. While Europe got a special M4 Coupe, North America received an M3 capped at just 500 units offered with retro liveries. Seen here is the super sedan painted in Cinnebar Red as a nod to the iconic M3 E30, but customers can also opt for Techno Violet, Interlagos Blue, Fire Orange, or Limerock Grey.

Available in the United States and Canada, the M3 Edition 50 Jahre BMW M rides on M forged wheels with an Orbit Grey matt finish. YouTuber Downshift Studios had the opportunity to sample the special version, which comes as standard in the Competition guise with xDrive. It also gets an assortment of M Performance Parts, but these largely consist of carbon fiber add-ons for a sportier look. 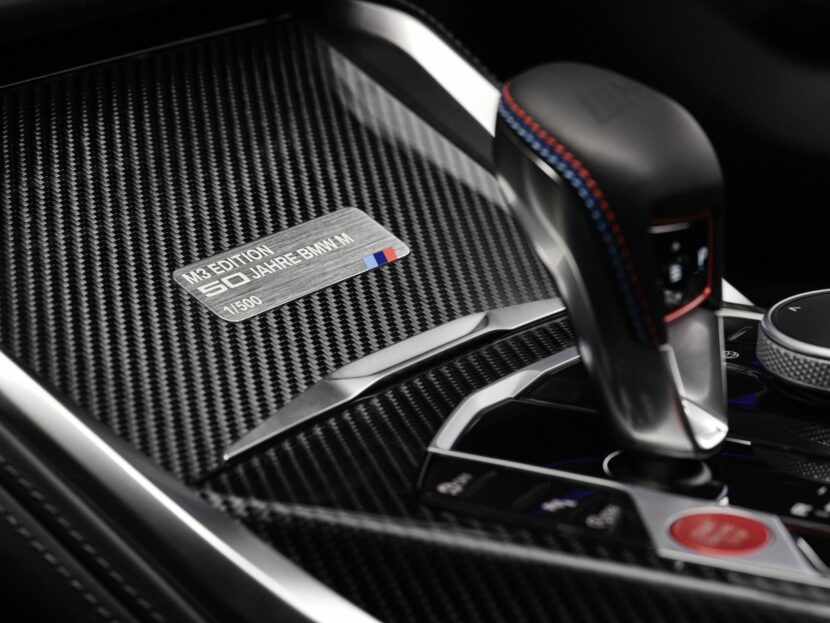 Being a 2023 model year, the anniversary M3 has BMW’s new iDrive 8 with the 12.3-inch digital instrument cluster sitting next to the 14.9-inch touchscreen housed within a single piece of curved glass. To set it apart from the regular M3, there’s “Edition 50 Jahre BMW M” lettering on the door sill trims. It’s repeated on the aluminum plaque positioned below the dashboard where it also says “1/500” to denote it’s a limited production car.

Although this particular example doesn’t have them, M Carbon Ceramic brakes are available at an additional cost and come with gold calipers. This M3 Edition 50 Jahre is also missing the only other extra-cost option available, the M Carbon bucket seats. Rounding off the tweaks on the inside are the generous use of carbon fiber and M colors throughout the cabin.

Those who would rather wait for a hotter M3 with mechanical upgrades should know the CS is coming next year but don’t expect rear bucket seats as seen in the M5 CS. We’ve been told the inline-six engine will pack 540 hp routed exclusively to both axles via an automatic transmission. Compared to the Competition xDrive model, the M3 CS is believed to shave off 20-30 kilograms (44-66 pounds).

Seeing as how the M3 Edition 50 Jahre is priced from $95,700 without the two options, don’t be too surprised if the M3 CS will end up costing six figures.