BMW’s lineup has grown tremendously in the last couple of decades, but for many people, the 3 Series will always be considered the company’s core model. Introduced earlier this year, the Life Cycle Impulse for the sports sedan came with an evolution on the outside and a revolution inside. More and more dealers are starting to receive the 3er LCI, thus giving us the opportunity to get acquainted with the updated G20.

Seen here is a 2023 320i configured with the optional M Sport Package and the Sapphire Black Metallic paint that also costs extra. It rides on the standard 18-inch wheels you get with the M Sport version, featuring a subtle M logo next to the center cap. Speaking of which, this car has the anniversary Motorsport emblem that BMW is offering throughout 2022 on all M Sport, M Performance, and M cars.

The classy sedan ticks all the right boxes as it has the optional adaptive LED headlights (with blue accents) and an electrically operated trunk lid. Unlike many walkaround videos we’ve seen portraying the facelifted 3 Series, this one shows a car configured without the blacked-out kidney grille. With the LCI, BMW refrained from giving the lesser 3 Series models the oversized front grille, which remains an M3-only affair. 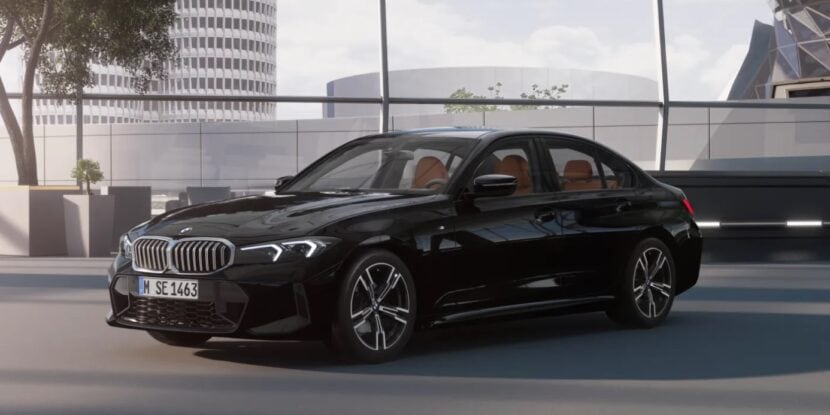 There’s nothing fancy about the interior as whoever configured the car decided to go with a Sensatec upholstery. The synthetic leather has the Cognac finish to spruce up what would’ve otherwise been a dull black cabin. The overhauled dashboard accommodates the Operating System 8, with two screens that stick out. They’re part of a single glass, slightly curved housing, with the 12.3-inch digital instrument cluster on the left and the 14.9-inch touchscreen for the infotainment on the right.

Looking lower on the center console, you won’t see the large lever of the automatic transmission. Instead, BMW has designed a small gear selector you’ll also find on the bigger and more expensive models. That being said, the 2023 M3 Sedan and M3 Touring are stuck with the old chunky setup despite also switching to the newest iDrive.

The car featured here has the Aluminum Rhombicle trim on the dashboard and center console. It has an anthracite finish and is far less prone to fingerprints than the typical glossy black finish luxury automakers tend to put inside their cars. It blends nicely with the three spokes of the M-branded steering wheel as well as with the door handles and the metallic finish of the brake and accelerator pedals.

Overall, this 320i might not have a lavish spec and is not as desirable as an M340i or an M3, but it’s an elegant 3 Series LCI with a small dose of sportiness.