It won’t be tomorrow or the day after that, but there will come a time when fossil fuels will be outlawed, meaning it’ll be impossible to drive your combustion-engined car anymore. Unless synthetic fuels gain traction in the coming years, electrification is inevitable. While that saddens traditionalists, there is a ray of hope for people who aren’t willing to let go of their classic and vintage cars.

As evidenced by the MINI Recharged project, cars that were originally powered by ICEs can continue to roam the streets following an electric conversion. Such is the case here with a 1975 BMW 1602 that used to have a gas engine. Electric Classic Cars in Wales not only fully restored the old Bimmer, but also gave it a new lease on life by yanking out the oily bits to make room for an electric motor and a battery pack.

At the heart of the 1602 is now an air-cooled HyPer 9 electric motor sending 120 horsepower and 173 pound-feet (235 Newton-meters) of torque to the rear wheels. The e-motor is bolted to the bell housing of the original four-speed manual gearbox, which means the driver can still row through the gears like he used to. While the amount of power isn’t impressive by today’s standards, the car only weighs 1,064 kilograms (2,346 pounds) split 58% front and 42% rear. As with every other EV, the torque kicks in virtually instantly. 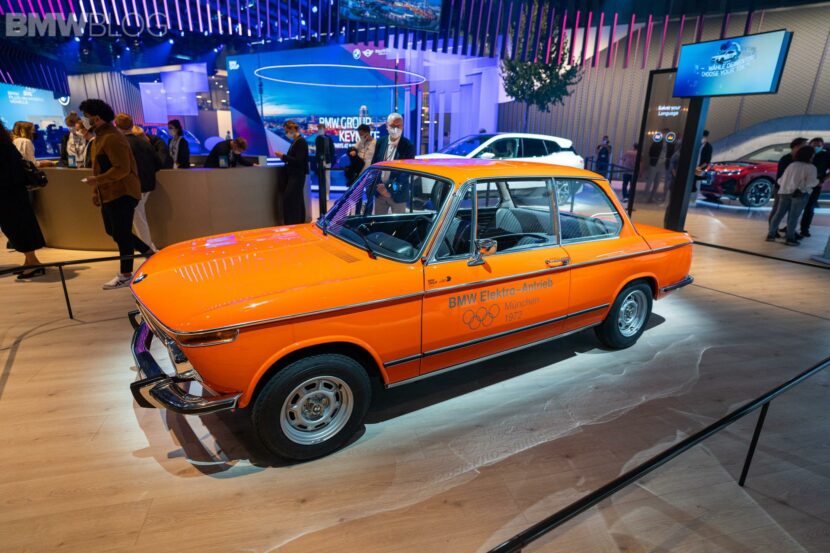 It needs seven and a half seconds to complete the 0 to 62 mph (100 km/h) sprint and tops out at 100 mph (161 km/h). With the 16 LG Chem lithium-ion cells (40 kWh) fully charged, it covers as much as 150 miles (241 kilometers).  The zero-emissions BMW wears a Porsche-inspired Oak Green paint you also might remember from the VW Golf GTI Mk2. It rides on 15-inch BBS replica wheels and boasts Brembo front brakes, while the ride height has been lowered by 30 millimeters (nearly 1.2 inches) courtesy of Eibach springs.

How much did it cost? Factoring in the donor car, restoration, and the EV conversion, it was £80,000 or about $97,500 at current exchange rates.

BMW itself is no stranger to turning the 3 Series’ precursor into an EV, having done the exact same to the 1602 for the 1972 Olympic Games in Munich. Coincidentally, the company set up a light show at its headquarters the other day to mark 50 years since the unveiling of the 1602 Elektro-Antrieb (Electric-Drive).