This Ultra-Low-Mileage E46 M3 Could Sell for Crazy Money

As we’ve seen, over the past year or so, values for classic sports cars of all kinds have skyrocketed. You can’t get a low-mileage ’90s Civic Si without spending brand-new Porsche Cayman money anymore. It’s getting out of hand. Then there’s the Bring-A-Trailer tax, as all cars sold on BAT fetch price tags that are easily 20-30 percent higher than they would be anywhere else. Combine all of that with the fact that this E46 M3, currently up for sale on BAT, only has 6,800 miles and it might sell for eye-watering money.

This 2004 E46 M3, with a six-speed manual, is absolutely lovely. Wearing Titanium Silver paint over red leather interior, it might be the perfect color combo for the E46 M3. What really sets this car apart from others, though, is its mileage. With only 6,800 miles, this car is essentially brand-new and it looks it. Judging by the paint, the interior, and even the seat leather, this car looks like it could have rolled off the showroom floor five minutes ago. There’s admittedly a single stone chip but if anyone cares about it they need their head checked. 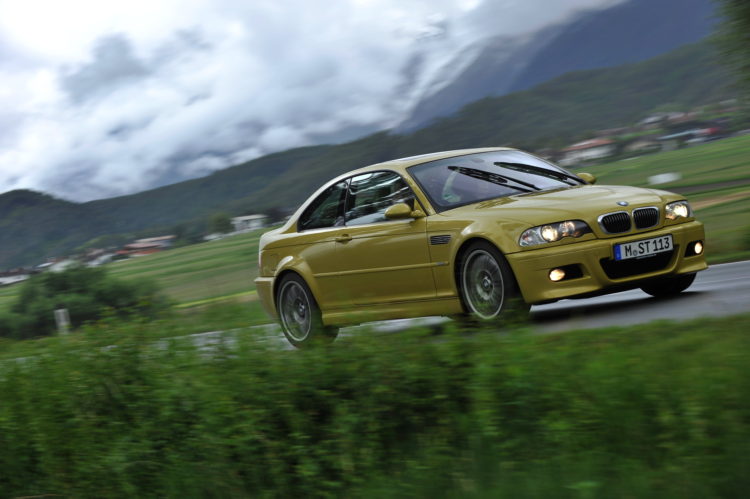 The only sort of modifications are a fresh set of Continental tires and a set of MGP caliper covers. Aside from that, it’s as it was when it new back in 2004, which makes it great for potential collectors.

E46 M3s such as this one typically fetch obnoxious money. Currently, at the time of writing this, there are two days left on the auction and the bid is at $53,000. That’s honestly a great price for such a car but it’s likely to go up dramatically over the next two days. I honestly hope it doesn’t, so maybe we can begin to curb these insane prices a bit, but there’s a good chance that this crests six figures. It will be interesting to watch this auction over the next two days.