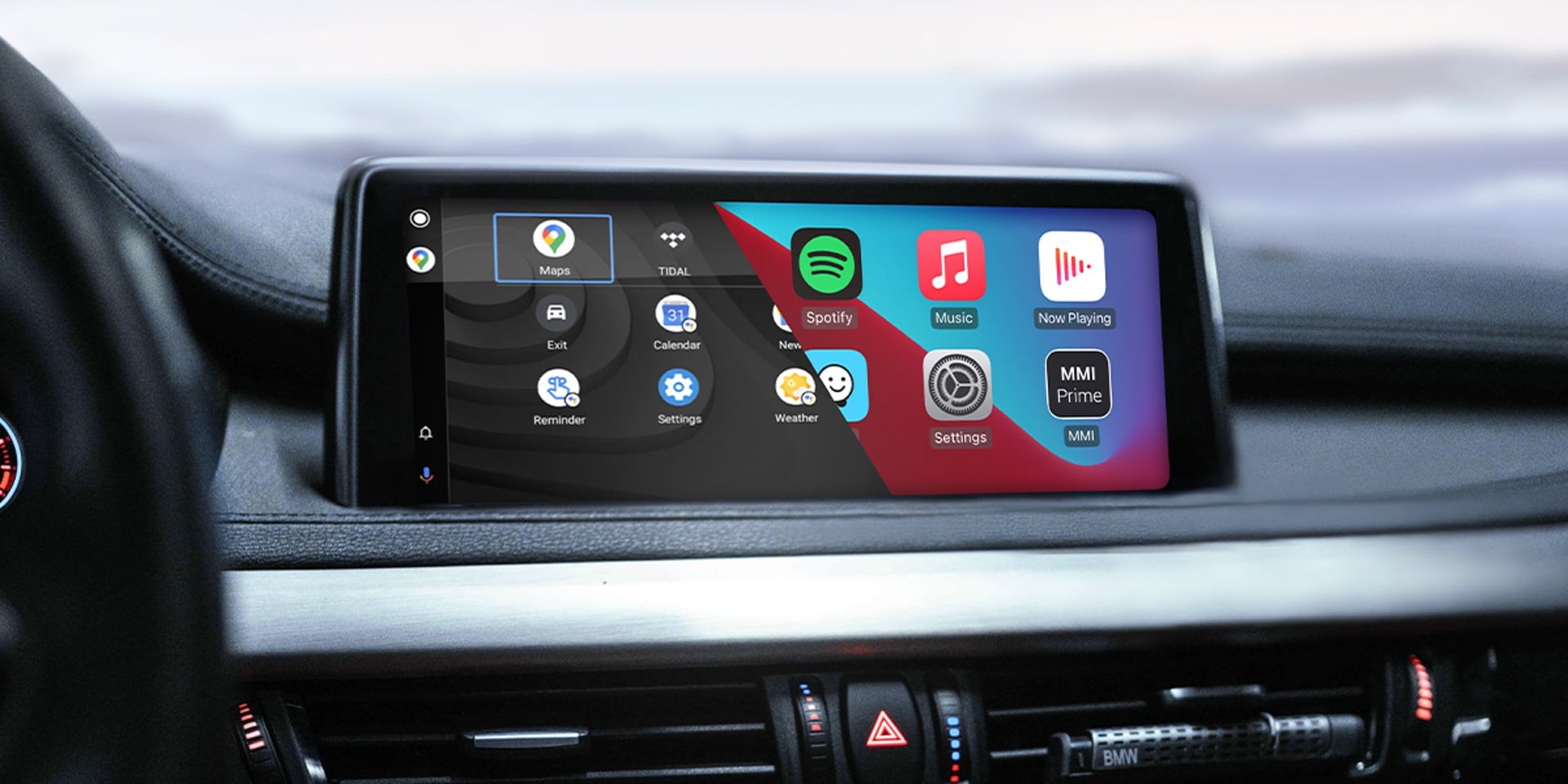 “The latest and greatest.” That’s definitely a thing people say, and it’s not for nothing – who doesn’t love something new every once in a while? But when it comes to cars, the water starts getting a little muddy. The latest and greatest features for safety and convenience? Sure, sounds good to me. What about the car itself, though? There are a lot of older rides out there with plenty of love left to give, and just as many enthusiasts who don’t want those vehicles consigned to the scrapheap just yet.

So what are you supposed to do about that? How can you keep your trusty old BMW on the road, without passing up on the features that make the newest vehicles so comfortable to drive?

Fortunately, with the right BMW Apple CarPlay upgrade or Android Auto retrofit, you can get the latest and greatest infotainment in your not-quite-the-latest-but-still-pretty-darn-great car. The best of both worlds! But how is it done?

Firstly, you’ve got to pick the best BMW CarPlay retrofit route for you. In a lot of vehicles produced since 2016, the iDrive system is fully equipped to support CarPlay, even if it hasn’t been activated. If that’s the case for you, one way how to activate Apple CarPlay in your BMW is to get an expert to unlock the native BMW Apple CarPlay option.

If that’s not on the cards – either because your BMW is a little older, or because it doesn’t have a suitable iDrive system – there are BMW CarPlay aftermarket solutions that can get you up and running.

The most popular is the BimmerTech CarPlay MMI Prime Retrofit, which doubles up as a BMW Android Auto retrofit thanks to its support for Android users.

That’s one key difference between the native BMW Apple CarPlay option and aftermarket BMW CarPlay retrofits. Older vehicles with BMW CarPlay support don’t offer Android Auto, so if you use a Samsung phone or other Android device, you’re out of luck.

Aftermarket options can also offer more flexibility. In older vehicles, the factory CarPlay interface is limited to only part of the screen, whereas CarPlay MMI Prime includes full-screen mode for all BMW models. With the OEM option, you’ll also have to rely on a wireless connection with your phone, unlike BimmerTech’s retrofit which offers both wireless connection and connection via a USB cable, which can be more reliable and less of a battery drain.

Unlike many alternatives on the market, BimmerTech’s BMW CarPlay upgrade uses your car’s existing dashboard display, and can be navigated easily using the iDrive controller. That said, for anybody who regularly switches back and forth between using CarPlay and other iDrive features, the native BMW iDrive CarPlay option may be more convenient to use.

What apps can you use on Apple CarPlay?

Either way you decide how to install Apple CarPlay, you’ll be able to use plenty of popular apps on your BMW’s iDrive screen. Just keep in mind that not every iOS app is available on Apple CarPlay.

The full list of Apple CarPlay apps is changing all the time, but they mainly fall into a few “car-friendly” categories, things that are going to be handy and safe to use while driving:

On top of being suitable for in-car use, the app developer also needs to have made a CarPlay-specific version. For the major apps, that’s been done, but if you use a particularly niche service, it might not be available on CarPlay.

How to screen mirror on CarPlay?

So how do you get all your other apps working on your BMW’s dashboard screen?

The Screen Mirroring option on your iPhone is one approach. If you haven’t used it before, it’s as simple as tapping “Screen Mirroring” on your phone and selecting another device to cast to. With that done, you’ll be able to see whatever’s on your phone’s screen on whatever device you decided to cast to – usually a TV, but there’s no reason it couldn’t be your BMW’s dashboard display.

Well, no reason except the fact neither BMW nor CarPlay supports it. Some vehicles allow mirroring Android devices, but for iPhone users, it’s no can do. And unlike Apple TV – which supports mirroring – CarPlay does not include any Screen Mirroring feature.

Some BMW CarPlay aftermarket kits bundle Screen Mirroring / AirPlay support, such as BimmerTech’s CarPlay MMI Prime. Then, you wouldn’t be limited to using only the apps available on CarPlay, and can instead mirror your phone to the iDrive screen, to access additional content in your car.

Just keep in mind that not all apps support casting via AirPlay. Some streaming apps, like Netflix, may use DRM technology to restrict mirroring, in which case you still have no way to get it on the BMW iDrive display.

When did Apple CarPlay come out?

So you’ve decided BMW Apple CarPlay could be good for you. Well, the first thing to keep in mind is that it was released in 2014. If your vehicle is older than that, you can be sure it didn’t come with CarPlay from the factory, and there almost certainly won’t be any way how to install Apple CarPlay without adding additional, more up-to-date hardware.

Still, you can add Apple CarPlay to an older car with a third party retrofit, even with an older iDrive system like the BMW CIC; CarPlay MMI Prime from BimmerTech is compatible with vehicles produced well before CarPlay was even released.

In the world of BMWs, CarPlay was first available as an option from the dealer in 2016, so they’re the oldest vehicles that are going to have the native BMW CarPlay setup active.

How do I know if my BMW has Apple CarPlay?

It isn’t quite that simple to say what year BMW has Apple CarPlay, though. Not every BMW produced since CarPlay’s release has it active, and even in some newer vehicles, there isn’t a way how to activate Apple CarPlay.

For a while, it was an optional extra. Then came that weird period when BMW wanted to charge people an annual subscription fee. Since then, CarPlay has been released to the masses, but it can still depend on your vehicle’s configuration and market.

In general, you’re interested in one of three vehicle configuration options that suggest you might have CarPlay, or at least the possibility to activate it:

But instead of trying to wrap your head around hard and fast rules, the easiest way is just to look for it – if CarPlay is active in your vehicle, you’ll see it in the iDrive menu.

How to add Apple CarPlay to BMW?

If you don’t find it, it’s possible your BMW is nevertheless kitted out with all the required hardware. Your best bet is to reach out to the specialists at BimmerTech, who will be able to check if your  vehicle specification meets the requirements to switch on CarPlay in a software activation, or whether you’re going to need a hardware retrofit.

The software activation is arguably the simpler and cheaper choice. It’s missing the little extras (a BMW Android Auto retrofit, support for Screen Mirroring), but it’s quick and easy BMW coding to do at home. At your own risk, of course. Depending on your vehicle’s software version, you’ll either have CarPlay split screen mode (with part of the screen dedicated to the iDrive interface, and the rest to CarPlay) or fullscreen CarPlay; BMW made the latter option available in more recent vehicles.

How to activate Apple CarPlay?

With BimmerTech, after a CarPlay compatibility checker has confirmed it’s possible to unlock CarPlay in your BMW, you’ll be able to do it remotely. Depending on your vehicle, you’ll either need a remote coding session with a skilled technician, or just to plug a prepared USB stick into your BMW’s USB socket. Both of them are to be done at your own risk as it’s the case with any software coding.

For older vehicles, you can get Apple CarPlay installed in the form of BimmerTech’s CarPlay MMI Prime. It supports the full range of CarPlay features, along with Android Auto and Screen Mirroring.

How to install Apple CarPlay?

The kit contains a custom module that interfaces with your BMW’s stock hardware. That means you won’t need to replace your iDrive screen or add extra controls for your new BMW Apple CarPlay upgrade – everything is controlled with your vehicle’s existing buttons.

As a hardware retrofit, you’ll need to disassemble your BMW’s dashboard to gain access to the iDrive system. That’s something a confident DIYer will be able to do themselves, or BimmerTech’s network of professional installers will be able to help you out.

Is Apple CarPlay worth it?

Whether you end up with a software activation or hardware retrofit, Apple CarPlay is going to make a big difference to your in-car experience. iDrive supports many of the same things promised by CarPlay – messaging, navigation, music – but there’s no comparing BMW’s native solutions to specialized, widely used apps.

Take a simple example: navigation. Depending on your region, the BMW navigation maps may only be updated once a year (or even less often for older vehicles), and even then often lag behind. Waze, on the other hand, is constantly updated, and has a huge user base to help you identify traffic hotspots and suggest alternative routes.

The difference is just as obvious with communication apps. BMW offers its Office options, but the convenience of WhatsApp or Messages, paired with Siri voice control, can’t be beat.

For help finding the best BMW CarPlay upgrade for you, feel free to reach out to the BMW experts at BimmerTech, who will point you in the right direction.

Full Disclosure: This is a sponsored post by BimmerTech. This post only contains tips and recommendations that could be helpful when carrying out car repairs or replacing parts. BMWBLOG is not liable for any harm, injury or property damage incurred while carrying out repairs or replacements, that are a result of incorrect use or misinterpretation of the provided information.