The iX M60 is BMW’s big debut this year at CES in Las Vegas, but your favorite brand has some other novelties on display in Sin City. One of them is the Theatre Screen serving as a window into the future of rear-seat entertainment systems. Rather than slapping on two small displays on the back of the front seats and calling it a day, the new setup aims to be much more sophisticated.

It boasts a massive 31-inch display in a 32:9 format (16:9 and 21:9 also available) with support for crisp 8K resolution. The Theatre Screen has features you’d normally come to expect from a smart TV and benefits from built-in Amazon Fire TV services. It means passengers sitting in the back will get to enjoy their favorite music and movies via streaming while on the go.

The big display is not fixed in place since it can be lowered and tilted through the configurable My Mode Theatre for optimal viewing. To create a cozy atmosphere, it will allow users to control the sunblinds and lighting to mimic a cinema experience. There’s even 5G connectivity onboard for ultra-fast transfers, which will be necessary for watching an 8K movie… 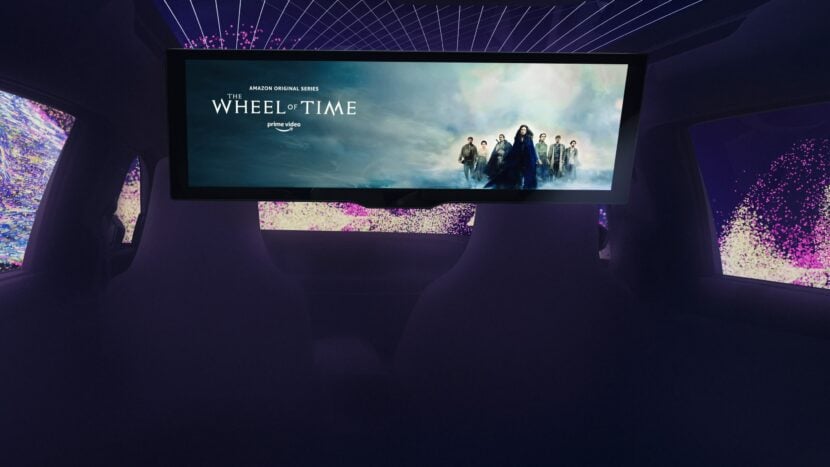 How do you control it? Either by touching the screen or using the touchpads embedded into the door cards. With a maximum resolution of 8000 × 2000 pixels and a fancy Bowers & Wilkins Diamond Surround Sound System, your BMW will become a rolling cinema. For cars fitted with this technology that will be sold in China, BMW says it’s working on a regional streaming service.

The large screen sticks out from the headliner and is installed on two articulated rails at the sides. As shown here, it’s even available if the vehicle is fitted with a panoramic sunroof. As to whether this is an actual future model or a generic vehicle, we don’t know. All we can do is speculate the next-generation 7 Series Sedan (G70) will get it, but nothing is official at this point.

The greenhouse does seem to belong to a sedan and we’ve heard rumors about a new rear-seat entertainment system for BMW’s flagship model, but let’s wait for a confirmation. An answer should arrive in the following months since the new 7er will debut later this year. As a matter of fact, it has already been teased in the fully electric i7 guise.