You can immediately tell this isn’t an ordinary BMW M3 (G80) as the Competition-spec performance sedan has been modified both visually and mechanically. The original color is now hiding under a Midnight Purple full-body wrap borrowed from the Nissan Skyline by literally copying its shade. The speedy saloon sits on 20-inch Envy forged wheels shaving off around 12 kilograms (26 pounds) over the original set.

The M3 Competition is running on a set of proper tires courtesy of Michelin Pilot Sport 4 S rubber measuring 295/30 ZR20. It wouldn’t be a full aftermarket package without a few carbon fiber goodies, namely the front splitter, side skirts, mirror caps, and rear diffuser. In addition, the Scorpion quad exhaust has the finishers clad in carbon fiber as well.

Even though the engine bay looks fairly stock, looks can be deceiving since the already potent BMW G80 has been heavily modified by British tuning shop NV Motorsport based in the West Midlands. It’s been upgraded with a stage 2 kit and is now pushing out somewhere in the region of 700 horsepower. As a refresher, the latest M3 Competition leaves the factory with 503 hp. 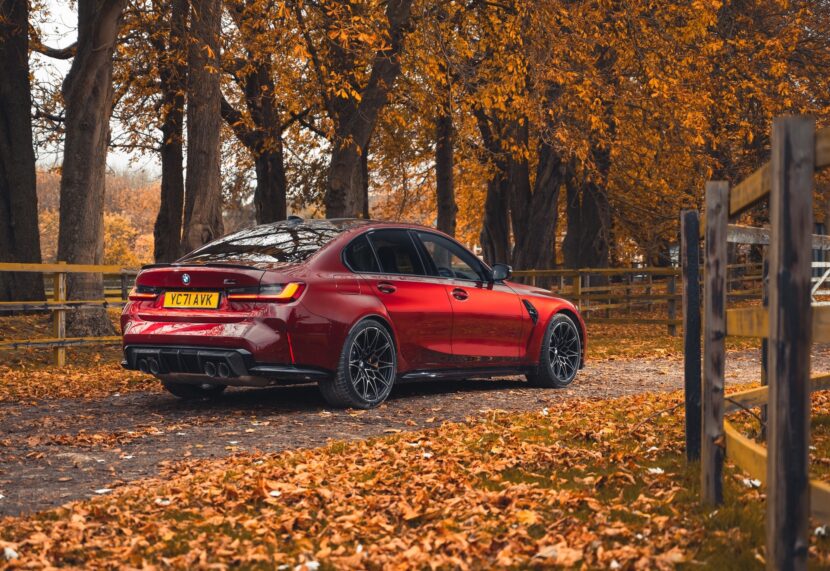 NV Motorsport is believed to be the first to crack to have cracked the S58’s ECU in a bid to extract more oomph from the inline-six engine. The 3.0-liter’s turbo boost pressure was initially dialed to 1.7 bar (24.6 psi) to increase output to 640 hp before being raised again to obtain an additional 20 hp. NV Motorsport has since increased the turbo boost pressure a third time, and while it hasn’t been on a dyno yet, it should have around 700 hp.

Horsepower number aside, the M3 now does 62 to 124 mph (100 to 200 km/h) in 5.2 to 5.5 seconds with premium fuel. There’s more to the engine upgrades than increased boost pressure for the pair of turbochargers considering the tuner has also worked on new intake ducts. You can see the 3D-printed orange ducts peeking through the big grille, but the finished product will be in carbon fiber.

There’s more to come since the beefy sedan will also get methanol and port injection. Traction becomes an issue with this much power only going to the rear axle, so BMW’s first-ever M3 xDrive should prove to be the ideal version to crank up the S58 unit as much as possible.