The sun is about to set on the F87-generation BMW M2 as we’re patiently waiting for the new performance coupe to break cover in 2022. In the meantime, tuners are still discovering ways to spice up the outgoing model, with some doing it better than others. We’ll leave it to you to decide in which category this Competition build fits as we’re fairly certain the car now has a rather polarizing appearance.

Finished in Hockenheim Silver and without too many optional features from the factory, this M2 was subsequently fitted with lots of carbon fiber upgrades from the M Performance catalog. Starting at the front, the speedy coupe has a one-piece splitter lending the front fascia a meaner look and the side profile shows more carbon fiber around the M2 logo on both front fenders.

The owner went to town with the M Performance bits and fitted the car with winglets mounted just about the rear wheels, and of course, the trunk lid spoiler and rear diffuser round off the list of upgrades. While the quad exhaust system might seem OEM from afar, it’s actually a titanium custom kit from Akrapovic with carbon fiber finishers to complement the diffuser. 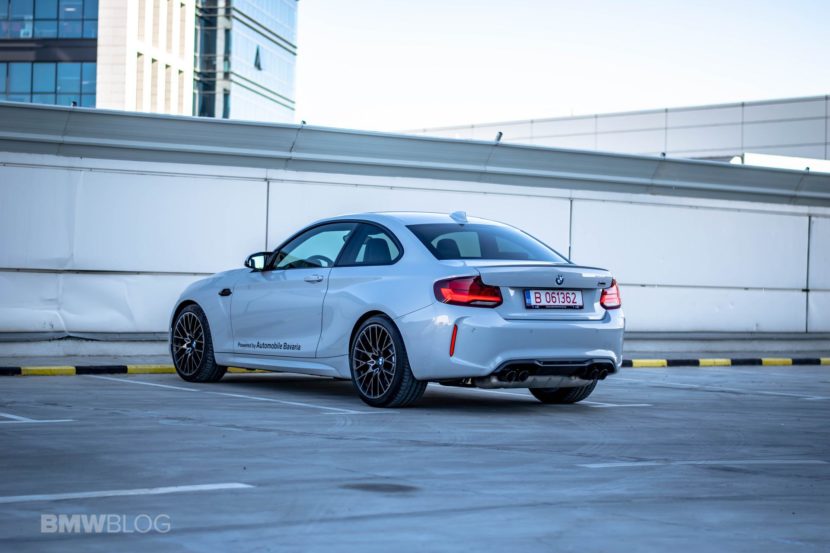 What makes the DCT-equipped M2 really stand out is the low-slung appearance provided by the Air Lift suspension bringing the little Bimmer dramatically closer to the road. The air suspension gives the coupe a slammed look that some might find a bit too much, especially since we’re dealing with a thoroughbred sports car.

Aside from changing the suspension, the original Competition wheels have also been swapped out to make room for a 20-inch set of alloys from Rotiform wrapped in Nankang tires measuring 275/30 at the rear and 245/30 for the front axle. Of the 12,000 miles (19,312 kilometers) the car has covered, some 11,000 miles (17,702 km) were done with the air suspension fitted.

The hunkered-down appearance is certainly not for everyone and while we do like the Rotiform wheels, Akrapovic exhaust, and the M Performance carbon fiber bits, we’d likely keep the OEM suspension of the M2 Competition.