The adjacent rendering only exists in the virtual realm for now, but it would be such a waste not to see it materialize in an actual product BMW M4 owners could buy aftermarket. Developed by hycade, the G82-gen sports coupe slims down the love/hate grille since it no longer extends all the way down. Instead, the redesigned front bumper has a massive splitter as part of a comprehensive aero package.

Sitting much lower to the road, the meaner M4 features a full widebody kit and custom headlights with a futuristic look that suit the hypothetical build quite nicely. The chunkier hips and hood bulge accentuate the hardcore nature of the high-performance coupe, and we could say the same thing about the trunk lid spoiler similar to the M Performance original carbon fiber part.

Speaking of OEM upgrades for the M4, hycade envisioned the angry-looking coupe with the stacked tips of the M Performance exhaust system tailored to the latest model. Rather than mounting them in the center like BMW does, these have been relocated to the corners of the rear bumper to mimic the look of Lexus’ F models. These are also noticeably bigger and flank a massive diffuser with two pairs of dual vertical fins. 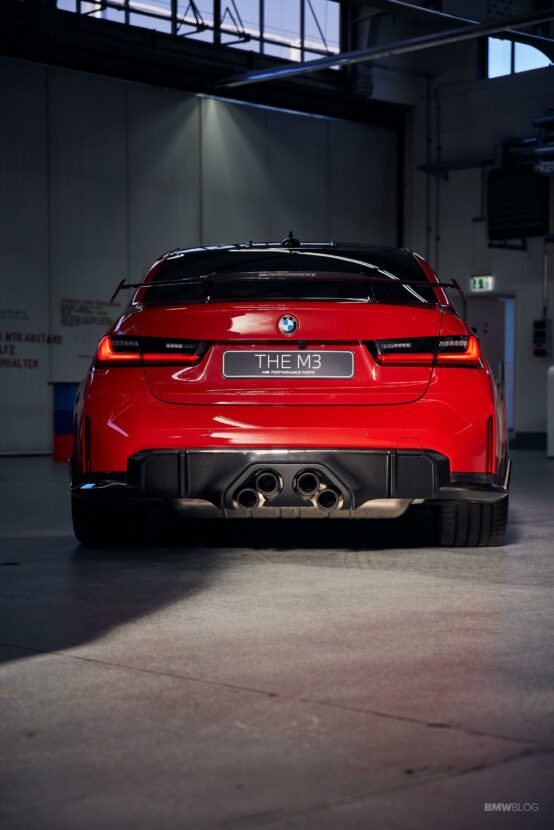 Sure, the makeover is a bit over the top, but we are fairly certain some people seeking more attention would appreciate the wild appearance package digitally imagined by the artist. The black one featured in the first part of the video is the most sinister of the three, although the subsequent red and blue schemes are also rather fetching.

For a more track-focused M4, BMW is putting the finishing touches on the CSL’s rebirth. Confirmed to lose over 100 kilograms (220 pounds), the speedy coupe will be out in 2022 with a more aggressive design and extra power. The former M boss Markus Flasch suggested it could be a two-seat affair to achieve the impressive diet, and logic tells us upgrades to the brakes, suspension, and chassis are also being prepared.

The M4 CSL certainly won’t look as outlandish as this virtual build from hycade, but who knows, maybe a tuner will be inspired by this video to create a real product catering to the G82 crowd looking for more visual drama.