Everyone knows weight is the enemy of performance, but thanks to the advancements in engine tech, today’s high-performance SUVs are just as quick off the line as supercars from the 2000s. Who would’ve thought that something as porky as the BMW X5 could drop below the four-second mark in the sprint to 60 mph? That’s despite the fact it weighs about as much as the moon and is a large vehicle with enough room for the whole family.

With that in mind, Sam CarLegion pitted the hotter Competition version of Bavaria’s high-performance SUV against two other speedy luxobarges – America’s Grand Cherokee Trackhawk and Britain’s Range Rover Sport SVR. The Jeep had the power advantage courtesy of its supercharged 6.2-liter V8 pushing out a massive 707 hp, followed by the X5 M at 617 hp and the SVR with “only” 575 hp from a supercharged 5.0-liter V8.

Not only that, but the Trackhawk also had the most torque out of the three, delivering a mountain-moving 645 lb-ft whereas the X5 M Competition had to make do with 553 lb-ft and the Range Rover Sport with 516 lb-ft. Their weights are comparable, with the BMW being the lightest, though that might not be the right term to use when talking about a vehicle that tips the scales at 5,038 lbs. The SVR is next with 5,093 lbs, and the Jeep is the chunkiest of them all, at 5,258 lbs. 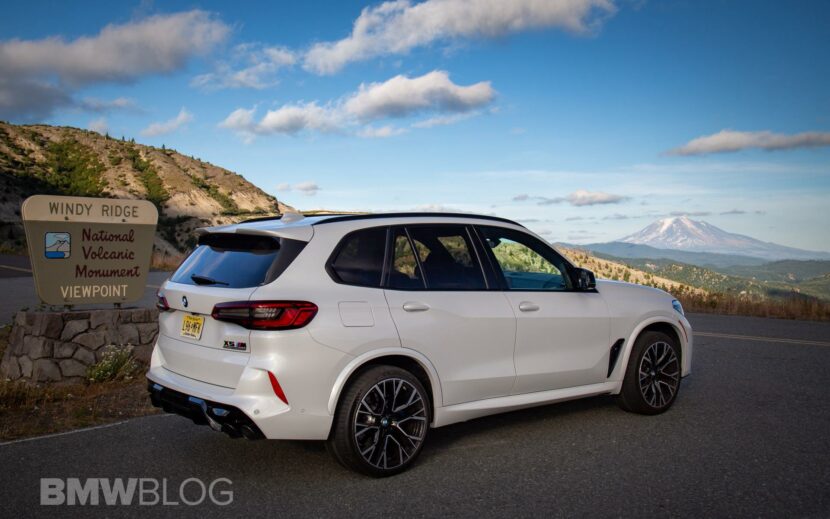 Now that we’ve looked at the technical specifications, we’ll point out the obvious and say the Range Rover Sport SVR didn’t stand a chance against its two contenders. With less horsepower and torque while carrying more weight, it’s no surprise the Land Rover was not able to keep up with the other two SUVs in a drag race.

The Trackhawk was quicker off the line in the first drag race, and while the X5 M Competition started to catch up, it wasn’t enough to recuperate the lost ground before crossing the finish line. However, that’s only because the Bimmer wasn’t all the way in sport mode in the first duel. With everything dialed to the maximum for the second duel, the X5 proved its worth by managing to beat the Jeep.

Moral of the story? It’s not all about horsepower, torque, and weight as nowadays choosing the right settings is just as important to squeeze every last drop of performance for a drag race.