We recently saw a render of what an all-electric 3 Series could look like, if BMW were to make such a car right now. To be honest, we don’t think there’s going to be an electric 3 Series for the global market until the next-generation (there’s going to be an electric long-wheelbased G20 3er for the Chinese market). However, it’s interesting to see what BMW might do for an electric G20 3 Series, especially because we know BMW can make one.

In this new render from Magnus.Concepts, we see what a G20 BMW 3 Series Electric might look like and it looks… well, it looks like a 3 Series. To be honest, if you were to see this exact render on the road, you wouldn’t be able to tell it wasn’t a BMW 330i M Sport without taking a closer look at its grille.

Being an electric car, it wouldn’t need a functional grille, so this render replaces the standard G20 grille with a fake one of the same shape. That would be expected if such a car were actually made and it actually looks good. Aside from that, though, it just looks like a 330i M Sport. It even has the same wheels. 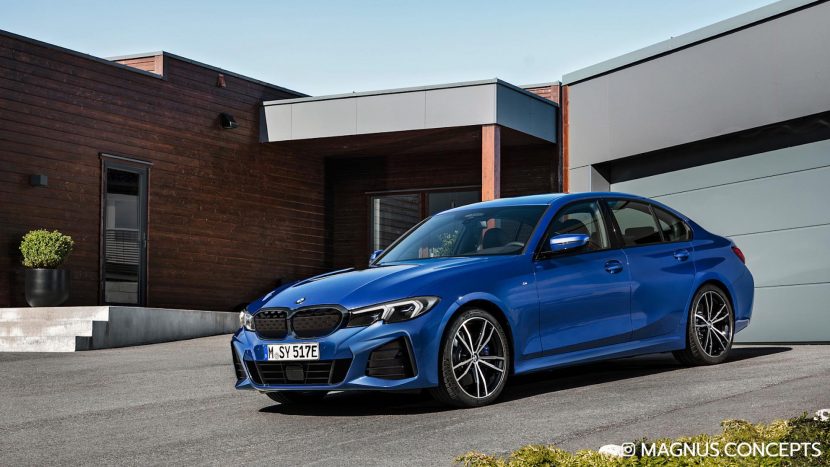 That said, it proves such a car would be a good looking one. The BMW i4 is a radical looking thing, with mahoosive fake kidney grilles, a Gran Coupe design, and a electric-specific bits. However, this render shows off a 3 Series that looks like a 3 Series. So if there are BMW customers that want something electric but don’t want something too radical looking, it’d be perfect for them.

BMW can also do this. The BMW i4 is built on the same chassis as the 4 Series Gran Coupe, which is essentially just a G20 3 Series chassis anyway. So BMW could absolutely make an electric version of the current 3 Series. Whether that’s actually a profitable endeavor is another story entirely.

We likely won’t see a purely electric 3 Series until the next generation and we hope that whatever it ends up looking like, it’s as normal looking as this car. A 3 Series Electric that looks and feels like a 3 Series is something I think all enthusiasts can get behind.