BMW F 900 R vs. New Ducati Monster: By the Numbers 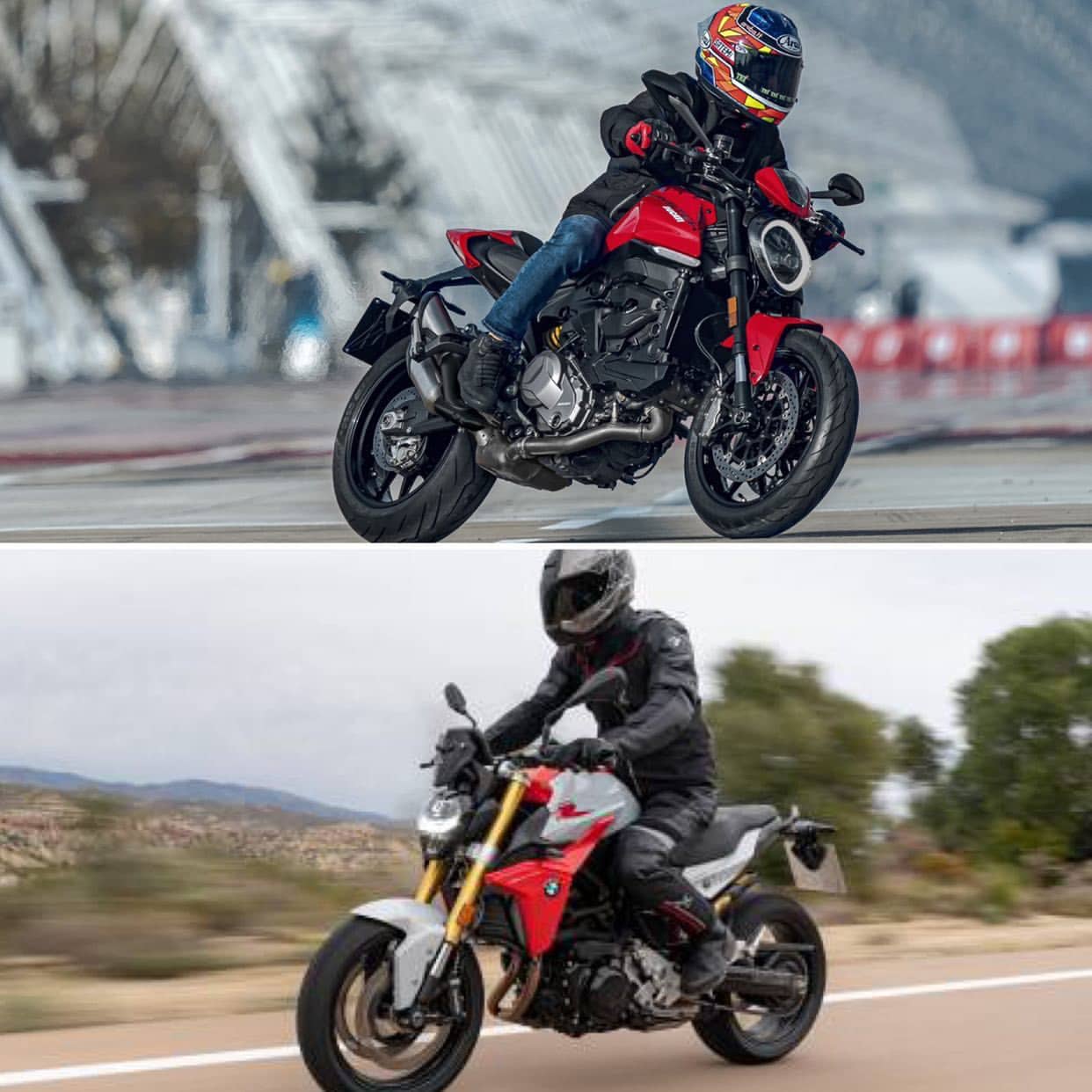 The rivalry between the two Bavarian automobile brands, BMW and Audi, is long-standing. It takes place in many segments across the premium market, even transcending the four wheeled realm. BMW’s motorcycle production predates its first car, and not only one but three of the five brands that would later become Audi were also manufacturers of motorcycles.

Currently, the two firms continue to battle on the motorcycle front, though not directly as Audi AG doesn’t sell Audi branded motorcycles. BMW, of course, has their Motorrad division, whereas Audi competes with a subsidiary of another one of its wholly owned subsidiaries, Ducati.

Today, we will be comparing two of their motorcycle offerings in the premium middleweight naked segment, as well as taking a glimpse into the state of this enduring face-off.

Ducati has recently released the newest version of their most successful motorcycle, the Monster. More than 350,000 Monsters have found homes since the model debuted in ‘93. The newest Monster represents a refined and controversially distinct interpretation of what the Monster moniker has come to be synonymous with. Most notably, the absence of the Monster’s most iconic trait, a trellis frame.

BMW’s closest competitor to the new Monster is their F 900 R, which debuted in November of 2019, as the replacement for the F 800 R. Unlike the Monster, the F 900 R isn’t generally thought of as being one of BMW’s most iconic or quintessential models, nor is it among BMW’s best sellers.

BMW is well known for their use of boxer engines, like those that power many of their most distinguished models. Instead, the F 900 R has a parallel twin engine configuration, which bikes like the venerable Yamaha FZ/MT-07 have shown can be very compelling.

Speaking of power plants, the Ducati’s motivation is derived from its 937cc Testastretta 11°, V2. It is, in fact, the same engine which is in the Supersport and Hypermotard. The BMW’s in-line twin has a capacity of 895cc. Concomitant with the disparity in capacity, the Ducati’s engine makes both more horsepower and more torque, though not significantly more. The Monster has 111hp, whereas the BMW has 99hp. However, their toque figures are even more comparable. The BMW creates 67 lb-ft of torque and the Monster makes 69 lb-ft of torque, both at 6,500 rpm.

As enticing as power is, slowing and stopping a motorcycle is of paramount importance. Again, the Ducati and the BMW are quite similar, at least on paper. They both have 320mm, dual rotors paired to four piston brake calipers. The F 900 R has a slightly larger rear brake disc, at 265mm compared to the Ducati’s 245mm disc, but the BMW has only a single piston rear caliper, whilst the Monster has a two piston rear caliper. Additionally, the Monster’s brakes are Brembo, front and back.

ABS is standard on both machines, but the Monster also has standard cornering ABS. You can get BMW’s, “banking capable ABS Pro,” by purchasing the optional Riding Modes Pro package. Along with ABS Pro, it gives you access to a suite of other safety programs and customizations, such as Dynamic Brake Control and Dynamic Traction Control, which elevates the BMW’s safety systems to a level which is comparable to that of the Monster.

You’d access the customization and disengagement of the aforementioned systems on both bikes through their color TFT screens. BMW was adamant that they placed, “great importance [on] optimum readability for the instrument cluster,” and it shows. The F 900 R has a standard 6.5 inch screen. That is more than 2 inches larger than the Ducati’s 4.3 inch unit.

Where the Monster has the most significant upper hand, in my opinion, is its weight. The new Monster has lost a lot of weight. Forty pounds compared to the Monster 821, its predecessor! The F 900 R was much more comparable in weight to the M821 than it is to the new Monster, and even then it was still the heavier of the two. BMW claims that the F 900 R weighs 465 pounds wet. The Ducati, it weighs merely 414 pounds wet. That’s a massive difference. A significant contributor to its weight loss was ditching that beloved trellis frame.

Best Bang For The Buck

Now, let’s discuss the BMW’s strongest advantage. It’s price. Whilst the Ducati does offer some alluring features as standard equipment, like an up and down quick shifter, it also costs significantly more than its German competitor. The new Monster starts a $11,895 USD, $100 less than the outgoing M821. You could buy yourself a Ducati shirt and hat with that $100, I suppose. However, with the disparity in starting prices between the BMW and the Ducati, you could buy yourself a fine, Swiss wristwatch. The F 900 R starts at just $8,995 USD.

Of course, that disparity would decrease if you opted for some of the BMW’s optional equipment, like the Riding Modes Pro package I mentioned earlier. Still, a wide gulf in cost would remain.

Why then does the Ducati cost so much more? Aside from the Brembo brakes and other standard features, you’re also paying for the Ducati brand name. Undoubtedly, BMW has a brand that is both very recognizable and highly associated with premium offerings. With that being said, Ducati’s brand straddles the line between premium and exotic.

However, Ducati USA’s CEO said that Ducati, “isn’t necessarily a luxury brand,” and that he doesn’t feel like Ducati is, “an exclusive brand.” That makes you wonder why you’d consider paying that premium for the Italian brand’s prestige if it is potentially in the midst of a decline. In just 2015, Claudio Domenicali, Ducati Motor Holding S.p.A.’s CEO, was adamant about preserving the brand’s exclusive aura. A notion I now suspect his superiors were not very supportive of, especially in the wake of the Diesel scandal.

Still, BMW Motorrad sells many more bikes in totality per year than Ducati does, with a much lower brand entry price. Both brands are broadly viewed as being aspirational, but Ducatis are relatively and conclusively more exclusive, a point of consideration for those seeking to ride something a bit more unique. Yet, because the Monster is such a popular seller for Ducati and the F 900 R isn’t for BMW, the two may be more directly comparable also in this intangible regard than one might initially assume.

Thus, if you’re in the market for a uniquely styled, distinctive and even customizable middleweight naked bike from a premium manufacturer, you should take a serious look at the BMW F 900 R. That doesn’t mean that you shouldn’t take a look at the new Monster too, you should. You may find that in person one better suits your personal preferences, or is a better fit for you ergonomically, etc. However, what is clear from this comparison is that to completely overlook the F 900 R would be a disservice to yourself.