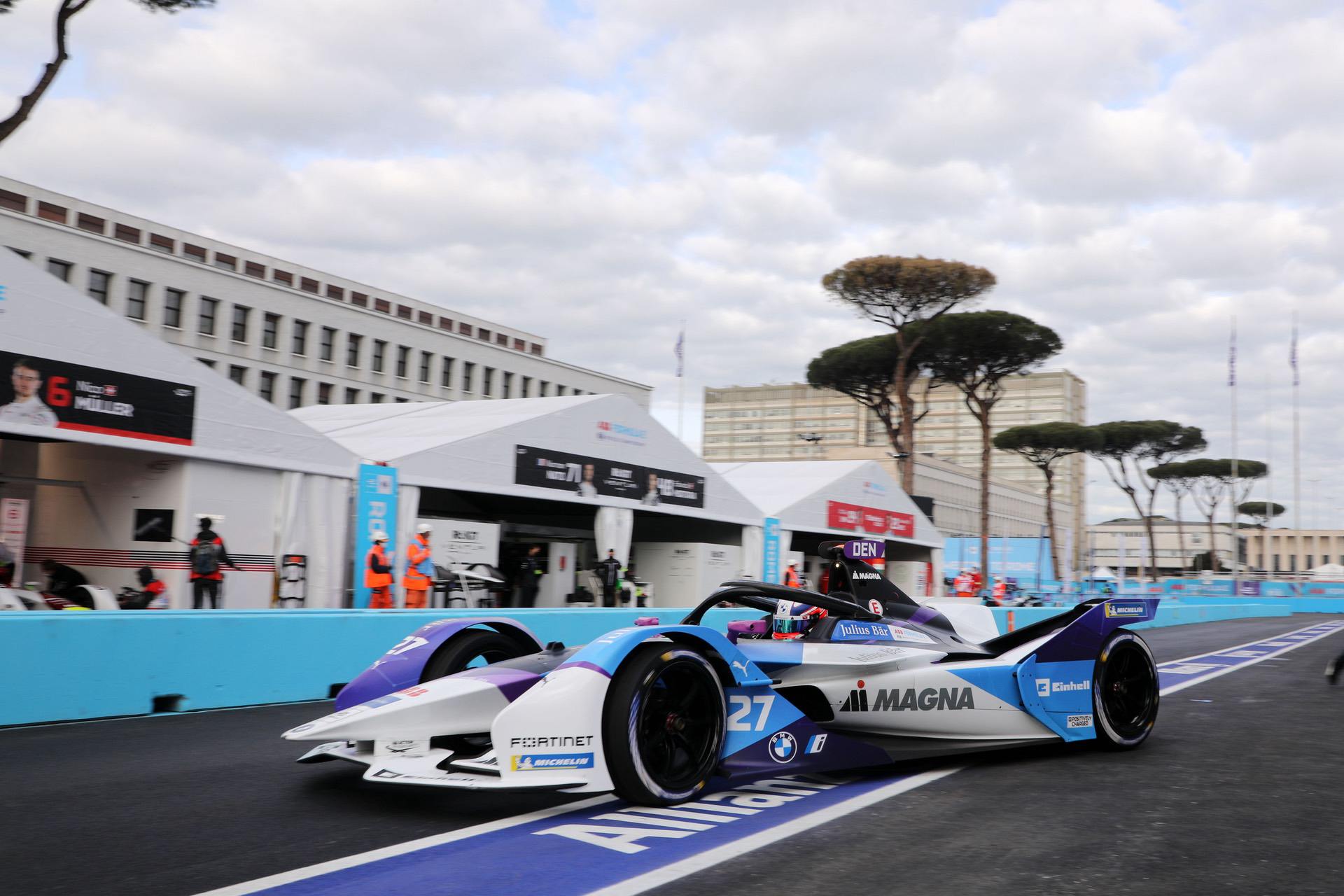 Last weekend saw the 2020-2021 Formula E World Championship touch down in Rome for the third and fourth rounds of the championship. There was still much to prove for the BMW i Andretti team, who arrived after two scoreless races in Diriyah a month ago languishing at the bottom of the Constructors’ Championship points standings.

While this weekend’s doubleheader was a significant step forward for BMW Andretti with Maximilian Guenther picking up points from both races, there is still a long way to go before the team and drivers can be classified as title contenders. We begin today with a recap of the first race in Rome.

Firstly, we proceed with a quick introduction to the weekend in Rome in general. Formula E returned to the streets of Rome for the first time since 2019 after a one-season hiatus, but the track had been radically reconfigured and now only loosely resembled the track that was used in the 2018 and 2019 seasons. This meant that previous records in Rome mostly went out the window — the drivers had to approach the race as if it were a brand new track.

Some sections from the previous track still remained, though, most notably the iconic “jump” section where Formula E cars were known to go the slightest bit airborne for a fraction of a second. But the Attack Mode activation zone, for example, was now on the outside edge of a wide hairpin turn instead of just on the inside line of a straight, meaning that cars would lose a lot more time taking the new Attack Mode compared to taking the old one.

This also meant that the previous Rome track’s characteristic of numerous varying pavement surfaces remained. Drivers would face the challenge of navigating the circuit as quickly as possible while paying attention to inconsistent grip levels on the track due to the different pavement surfaces. In addition, white painted markings on the track for lane dividers, crosswalks, and bus lanes were slippery hazards in the event of rain.

And rain it did. The whole weekend was overcast, punctuated by small showers on Saturday and Sunday, affecting both Qualifying and the race for both Race I and Race II. In fact, both races would end up starting behind the safety car due to the damp conditions.

Qualifying had been promising for the BMW Andretti team, with Max Guenther making it to the Super Pole session and managing to qualify 6th before being demoted to start 11th after the application of a five-spot grid penalty carried over from Diriyah II where he had been judged to have caused a collision. Jake Dennis, the driver of the #27 car, unfortunately was not able to get a clean lap in and would start the race from 19th place despite having been in Group 4 for Qualifying.

Before the race, the track was damp but it was not actively raining. Race Control, however, decided to call for a safety car start due to the dampness of the track. The brand new MINI Cooper safety car was called upon for the first time to lead the pack through two laps of the Rome street circuit before racing would begin in earnest. Drivers and viewers noted that certain parts of the track were wet while others were actually already quite dry.

Two laps behind the safety car quickly passed, and the queue of cars behind polesitter Stoffel Vandoorne of the Mercedes EQ team prepared for the green flag. With 40 minutes (+1 lap) to go, the green flag was waved and the cars took off at full pelt for the first time!

An immediate incident ensued: Porsche’s Andre Lotterer, having started the race in 2nd behind Vandoorne, looked racy and stuck to the rear end of Vandoorne’s Mercedes. Going into Turn 7, the German attempted a risky last-second move, diving to the inside of the Mercedes at the braking zone in an overtaking attempt. Vandoorne, however, was having none of it and turned into Lotterer as if he weren’t there.

The two leaders collided and went straight on instead of turning left. Luckily for them, they were able to recover quickly and get back into the race, but now Lotterer was running in 7th and Vandoorne had fallen all the way to 13th. These shenanigans promoted Guenther to 10th.

With 38’ (+1 lap) to go, former BMW Andretti driver Alexander Sims ran into trouble, with his Mahindra slowing to a crawl. This promoted Dennis into 18th position. At around this time, Attack Mode activation opened, meaning that cars were now allowed to activate Attack Mode by running to the outside edge of the Turn 14 hairpin. Mitch Evans, meanwhile, was right behind Guenther and attempted a dive down the inside at the hairpin, to no avail.

However, he was able to make a move stick a few laps later, demoting Guenther to 11th. In the meantime, Dennis made a move past Nico Muller’s Dragon to snatch 17th.

A frenzy of Attack Mode arming occurred with around 28’ (+1 lap) remaining, with cars directly ahead of and behind Guenther all arming Attack Mode. Guenther did an exceptional job of maintaining his position during this time, notably keeping Alex Lynn and Sebastien Buemi behind him.

At this time, cars from 1st position to 15th position were all running nose-to-tail, covered by approximately 7.0 seconds. None of the top 8 cars had taken Attack Mode yet though; perhaps they were waiting for each other to make the first move.

At 23’ (+1 lap), the DS Techeetah Driver Jean-Eric Vergne was the first to blink, activating Attack Mode and dropping from 2nd to 5th. His move prompted Robin Frijns, Nyck De Vries, and both Porsches to take Attack Mode as well on the following lap. Guenther was able to sneak past Lotterer when Lotterer ran wide following his Attack Mode activation, and thus moved into 9th. At 19’ (+1 lap) remaining, Guenther finally took his first Attack Mode, doing well to only drop into 11th, behind Sebastien Buemi. But disappointingly, he was unable to leverage four minutes of extra power to get past Buemi’s Nissan and thus remained in 11th. Up ahead, Vergne passed De Vries for the lead but Lucas di Grassi in the Audi was lurking behind.

10’ (+1 lap) to go marked a very negative turning point for BMW Andretti. Around this time, Dennis’s car appeared to have technical issues as it ground to a halt in the runoff area off a corner, ending his race. Guenther, in the meantime, had a spin and hit the wall in an incident that was only briefly replayed on live TV, resulting in him dropping to 16th after he took Attack Mode. However, he was resilient in continuing and even recovered to 13th place. But with 5’ (+1lap) remaining in the race, he was in a bit of trouble as he had consumed slightly more energy during the race than the cars around him had.

He received a lucky break in that regard though — just 4 minutes from the final lap of the race, race leader Lucas di Grassi suffered a driveshaft failure and was immediately out of the race, driving slowly on the track to move his Audi to retire in a safe location.

In avoiding the stricken Audi driving on the racing line, Vandoorne moved to the outside line and hit a manhole cover, sending his Mercedes into a spin and a crash. His teammate de Vries got involved in the ensuing chaos and was forced to retire from the race as well. This led to a safety car period, neutralizing any issues Guenther had in energy management. He would finish the race 10th behind the MINI safety car, which then became 9th after Lotterer’s penalty (for crashing into Vandoorne) was applied.

Overall, it was good to see the BMW Andretti team score their first points of the season. As a matter of fact, this was the first time Guenther had ever scored points for BMW Andretti in a race where he did not finish on the podium. Picking up these small scraps of points will be vital in what could be shaping up to be a long championship. However, there is clearly still a lot of work to be done back in the factory, as the BMW iFE.20 looked outmatched by many of its rivals during the race with Guenther being forced to drive defensively for much of it. What would Race II in Rome bring? Check back tomorrow for the report!