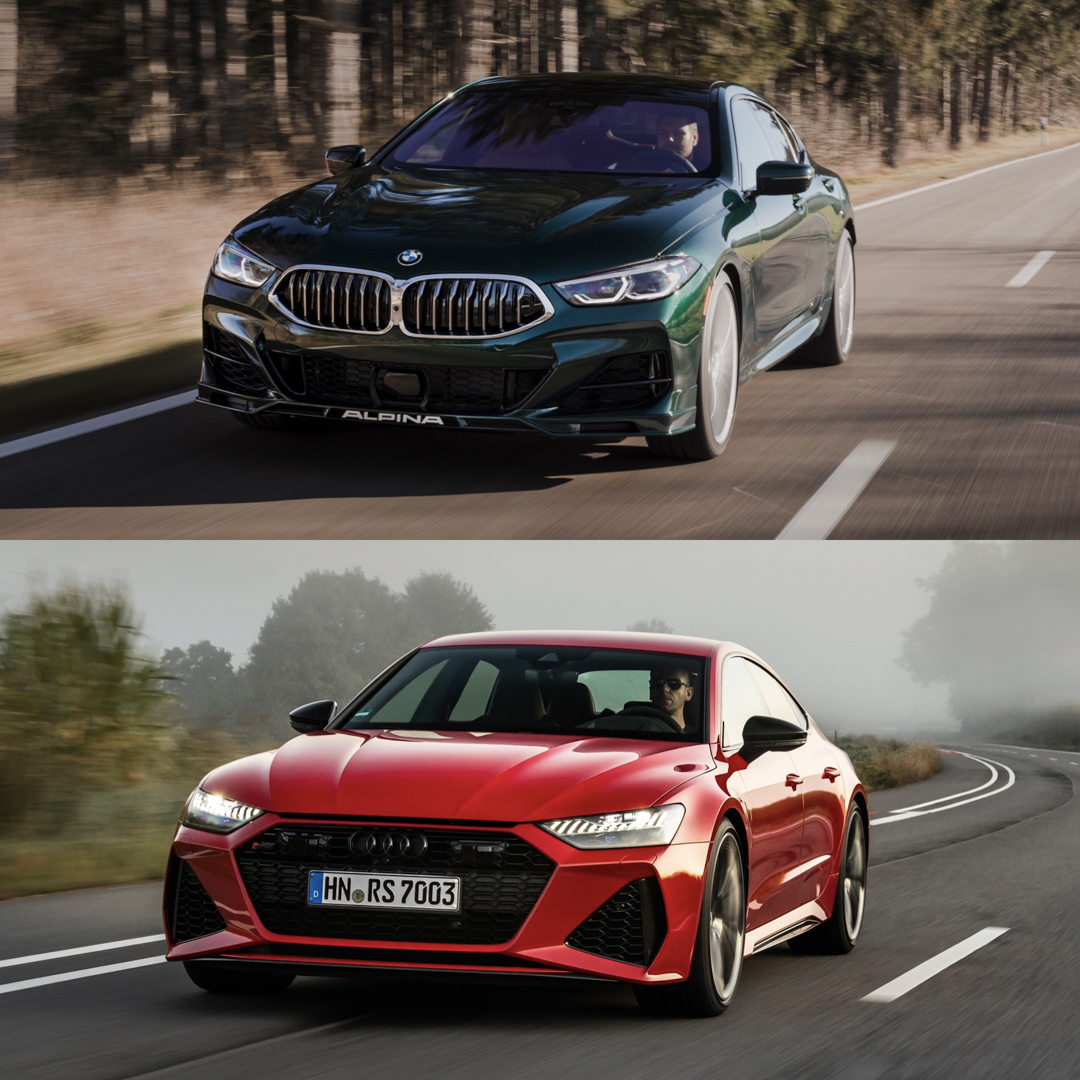 Now that the ALPINA B8 Gran Coupe is finally here, it’s time to take a look at how it compares to some of its rivals. While one might argue that its most common rival actually comes from its own parent brand, the BMW M8 Gran Coupe. However, intra-BMW competition aside, the B8’s biggest competitor is likely going to be the Audi RS7 Sportback. Even though there is a decent price gap between the two of them. The RS7 starts at around $114,000 and the B8 Gran Coupe at $139,000. And as always, these photo comparisons are subjective, so with that being said, let’s take a look.

Both cars are four-door German coupes, both are similar in size, have similar power, and similar performance. They also both lean more toward performance GT cars, rather than all out performance machines. The two biggest differences between the two are exclusivity; the ALPINA is far rarer and more refined; and the fact that the RS7 has a liftback tailgate. However, those are just some of the differences, so let’s get on with the comparison. 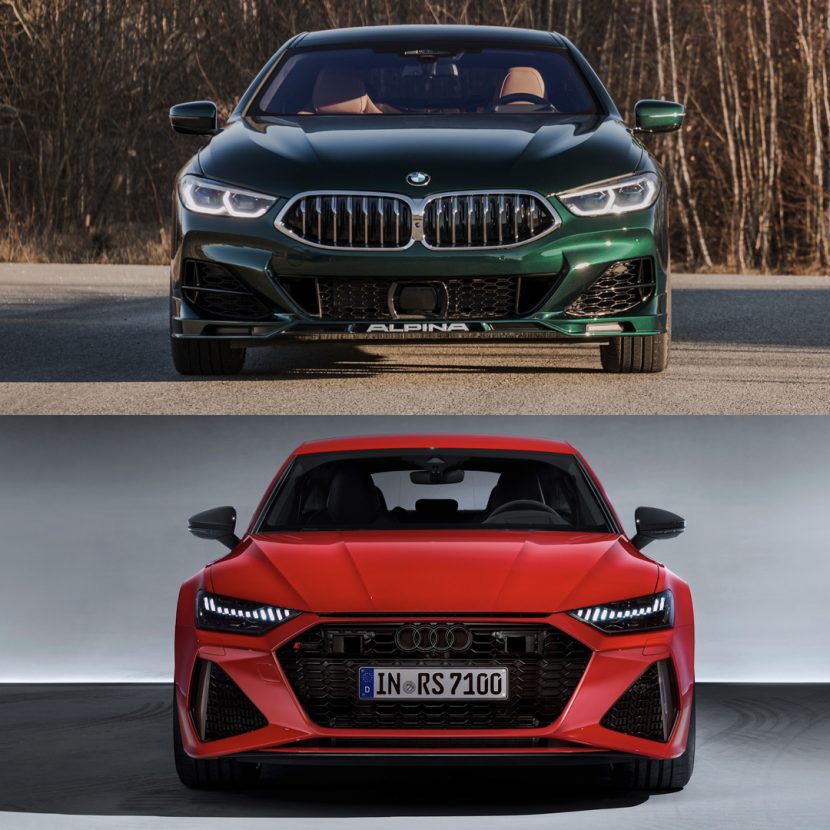 Choosing between the B8 Gran Coupe and the Audi RS7 is like choosing between which supermodel to date. They’re both spectacularly gorgeous cars but, interestingly, they’re quite different as well. Up front, the B8 Gran Coupe is far more subdued, with a refined, sophisticated look. Sure, it has large air intakes but they’re less aggressive than those found on the RS7 (they’re all real as well). The RS7’s aggressive grill, angular headlights, and sharp hood lines make it the sportier looking car of the two. I’m actually having a hard time choosing between them but I think I have to hand it to the Audi, due to its hyper-slick LED headlights, and sportier look. But I can’t argue with anyone that would choose the classier ALPINA. 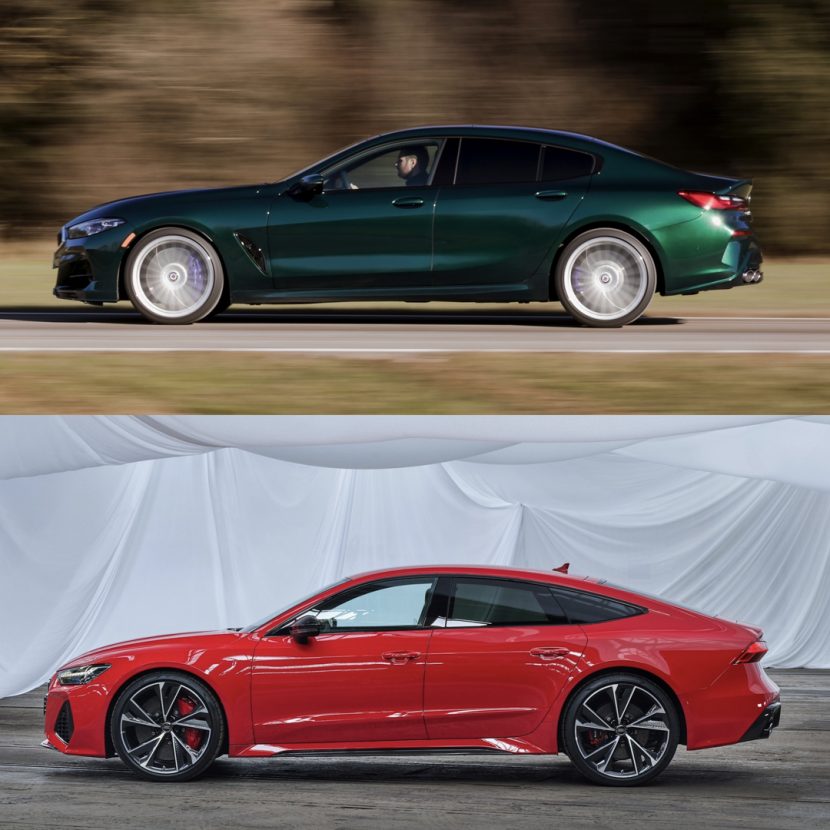 In profile, it’s another close call. The ALPINA B8 Gran Coupe is a bit lower, a bit sleeker and, again, a bit more sophisticated. The Audi RS7 Sportback has a liftback tailgate, so its roofline is a bit taller. It’s more practical but it’s not as slick looking. The B8’s overall silhouette is just a bit prettier and its stunning ALPINA wheels are far prettier than the overly garish wheels of the RS7. The Audi is a gorgeous car but if it does have a flaw, it’s with its slightly obnoxious wheels. So the B8 takes it.

Out back, it’s again a choice of whether or not you like more subdued or more aggressive styling. The B8 features typical 8 Series taillights but it has a nice diffuser and fantastic quad exhausts that extend through the rear bumper. The Audi RS7’s rear lightbar is stunning and its oval exhausts are very aggressive looking. So it’s a tough call. I think the RS7 has to take it due to the sheer theater of the rear light bar. The active rear spoiler is cool, too. 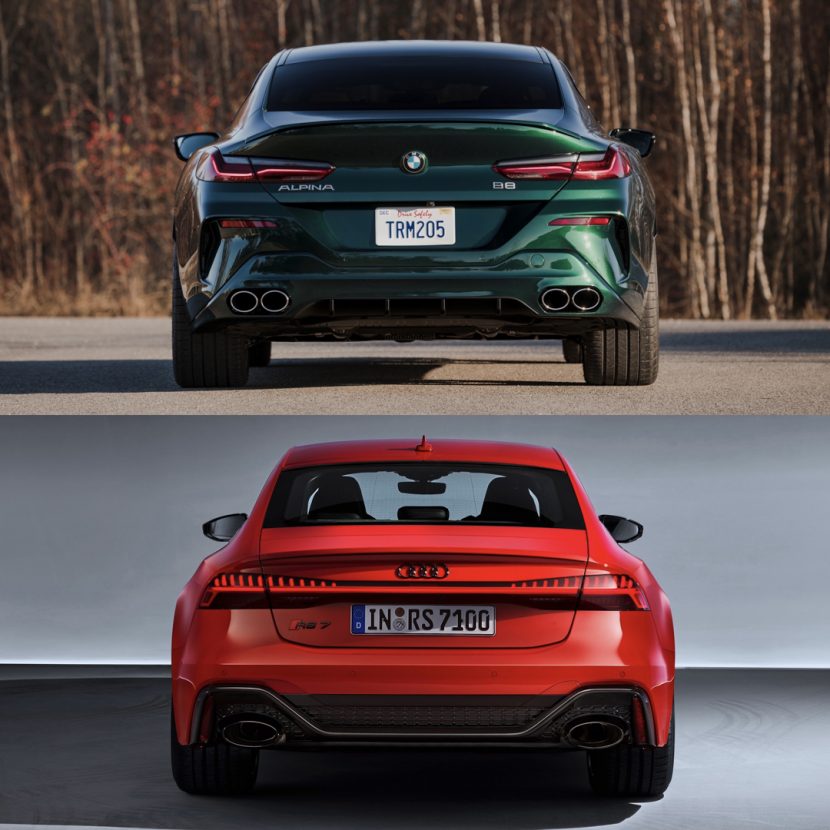 This is one of those comparisons that, even though the Audi technically won, two-to-one, I have hard time actually crowning it the winner. The ALPINA B8 Gran Coupe is more than the sum of its styling parts, as it exudes a sort of refined aggression and exclusivity that the admittedly stunning RS7 can’t match. I love both for different reasons and wouldn’t blame anyone for choosing either one over the other. 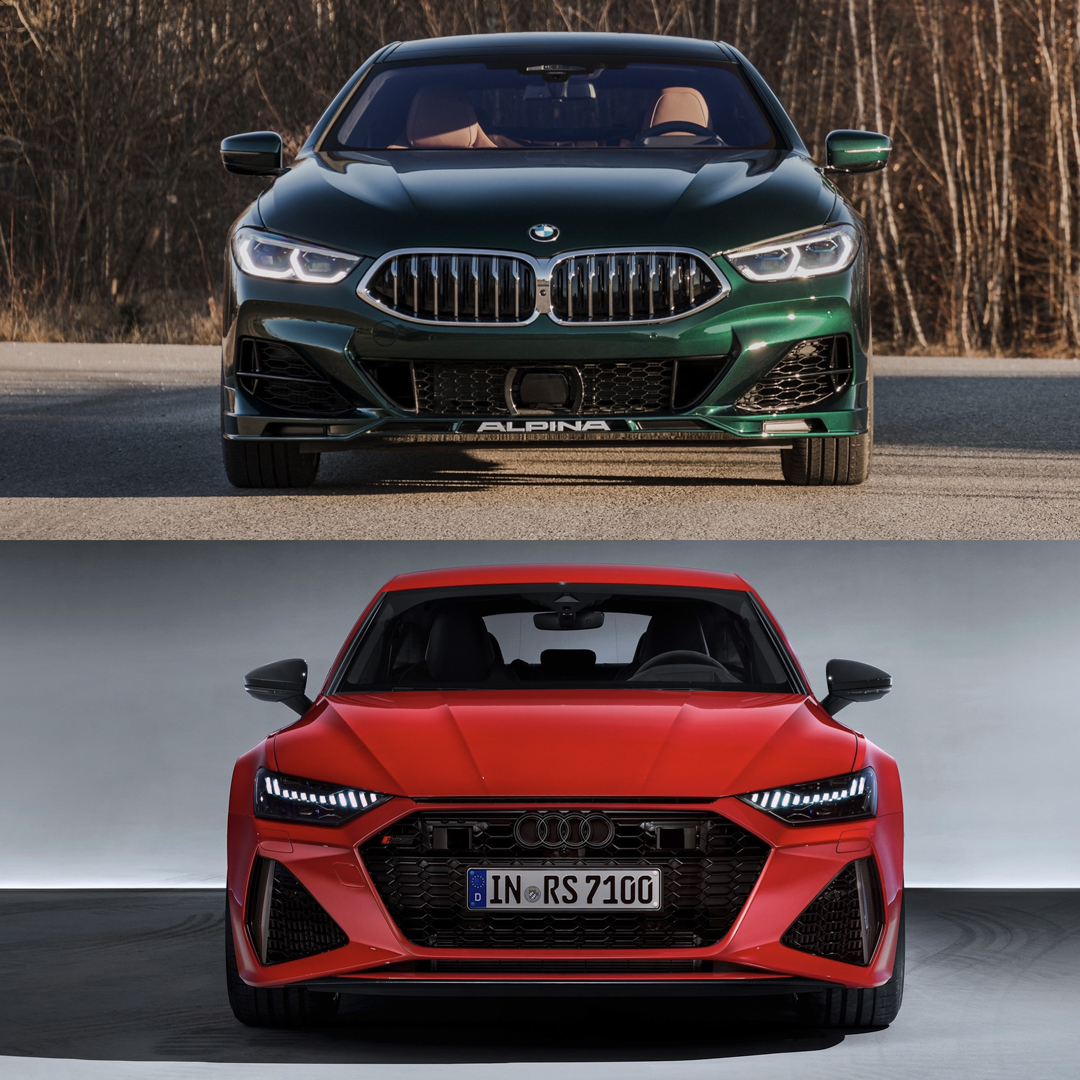 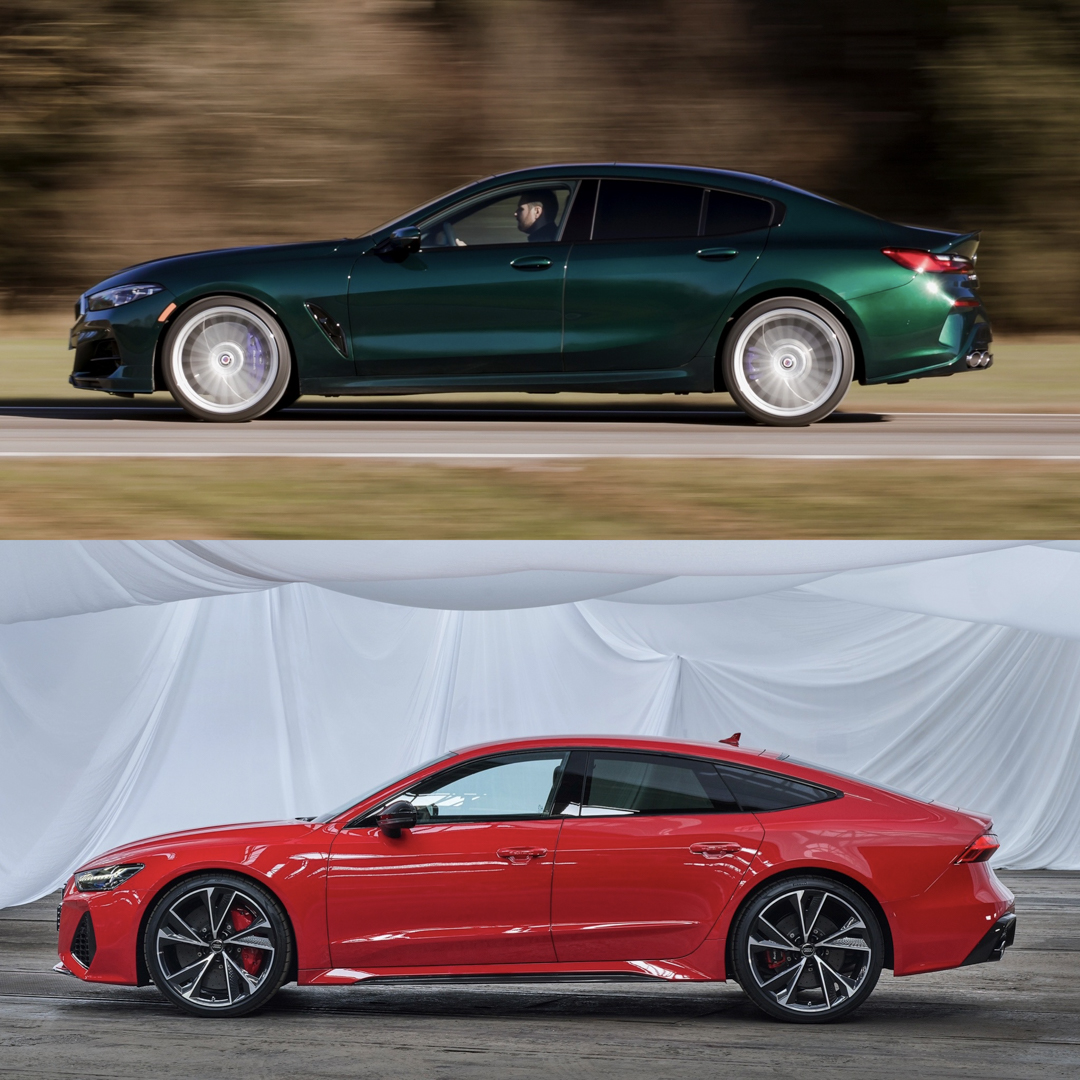 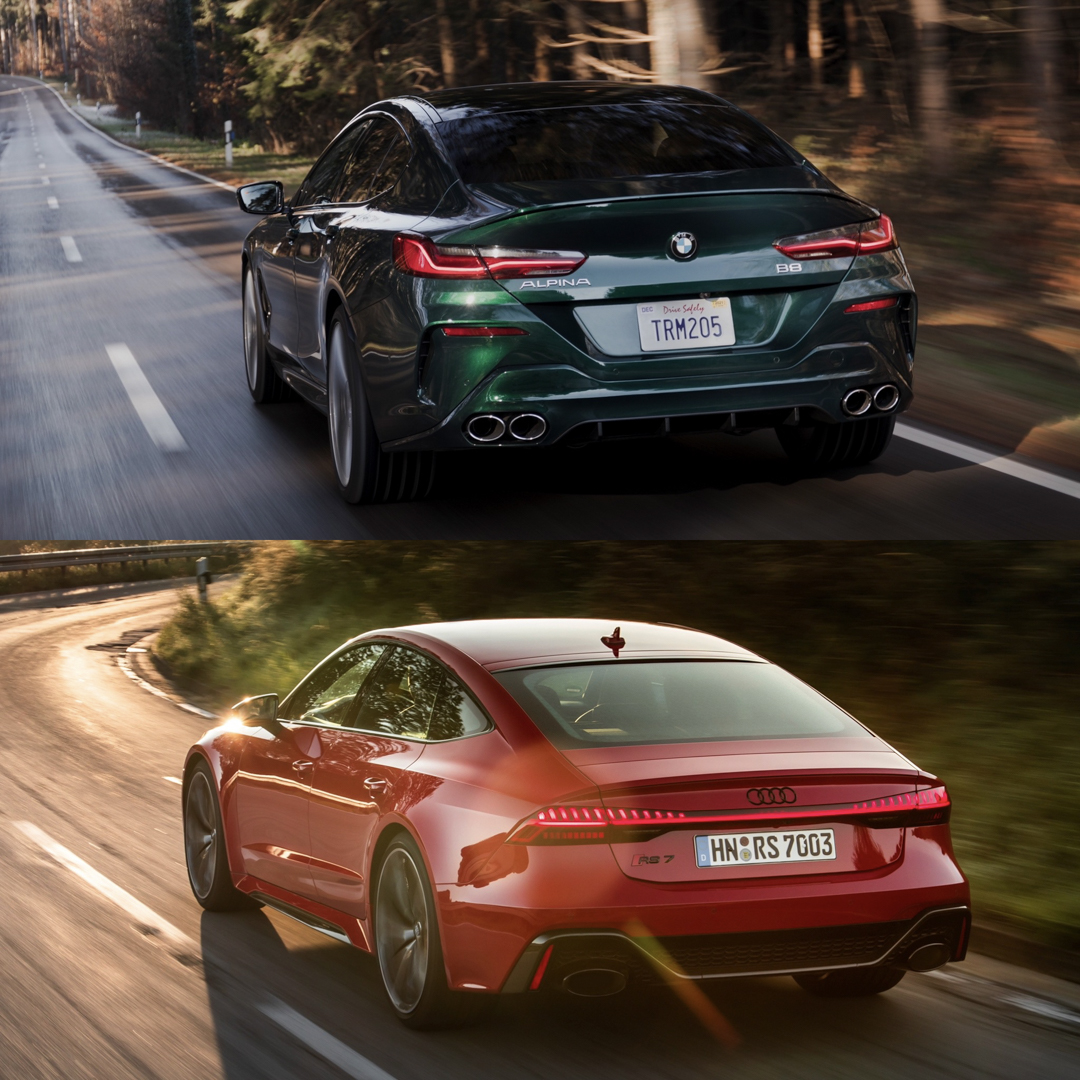