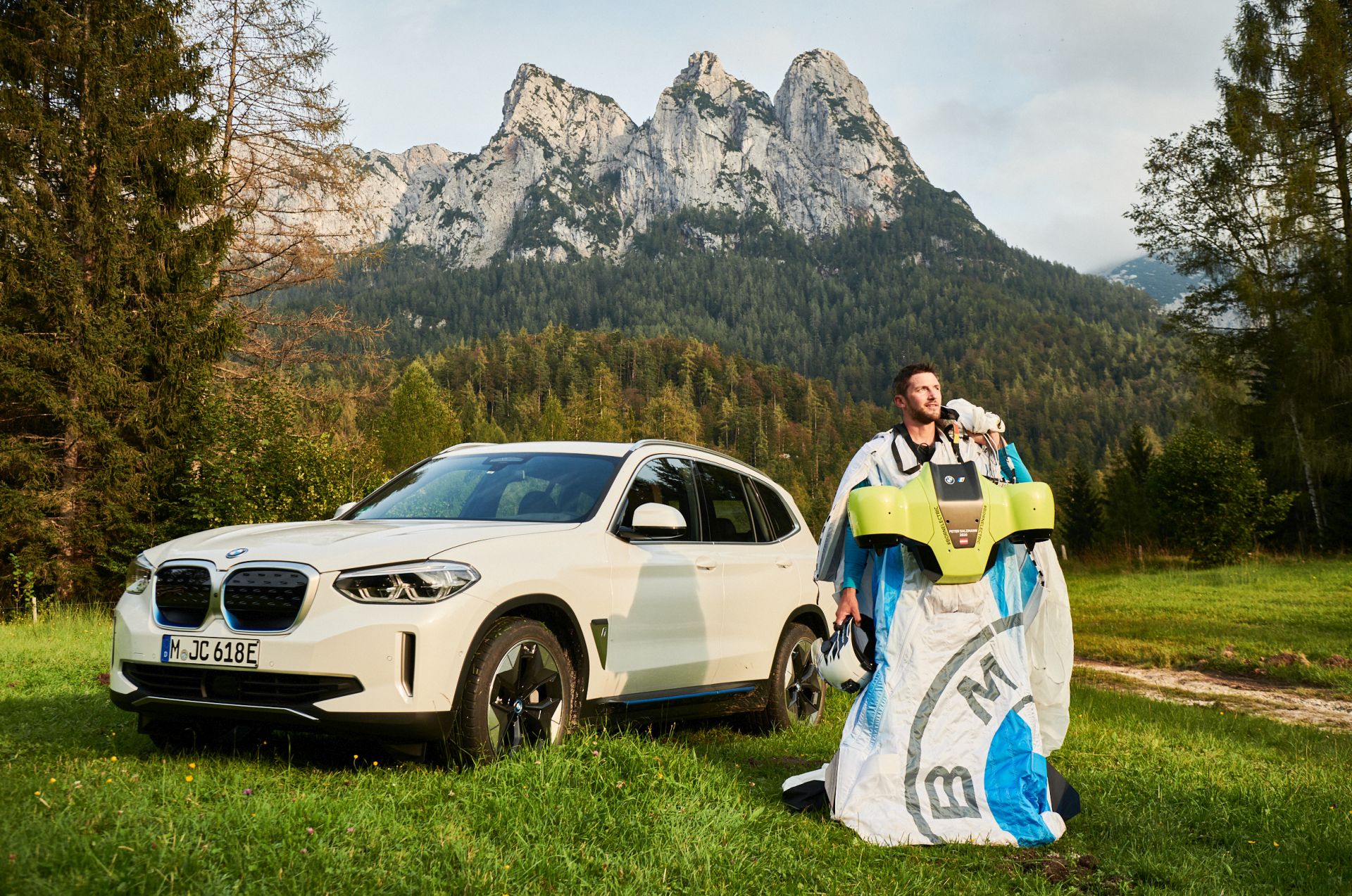 No matter how far we’ve come with technology, one of our species’ oldest dreams still seems impossible to attain: flying. The oldest stories passed on from generation to generation have been mentioning this deep desire of humans to simply soar up into the sky and fly. While we’ve emulated that several times, we’re still pretty far off from clear, individual flight possibilities. A step in the right direction was just unveiled as part of the #NextGen event.

As we told you earlier this week, BMW kicked off its second #NextGen event as November rolled by. This is basically a series of premieres, focusing either on technology or on concepts. This time, we’re checking out the world’s first electrified wingsuit.

It all started in Salzburg in 2017, when the idea of such a wingsuit popped up in Peter Salzmann’s head. Who is Peter Salzmann? He’s an Austrian wingsuit pilot, you know, the guys who climb to the highest peak they can find and then jump off, spread their arms and legs and hope they don’t hit anything on the way down, while adrenaline levels in their blood goes over the top. 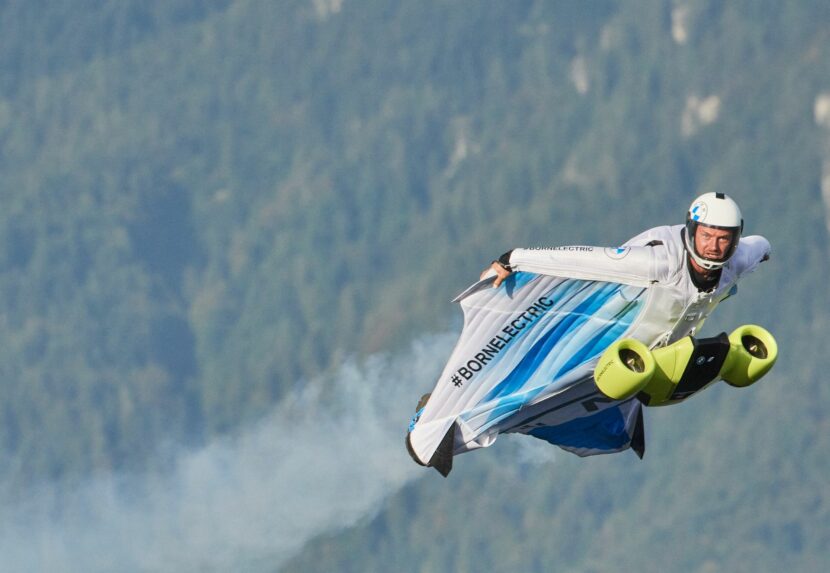 According to him, the idea hit him while developing suits for skydiving and basejumping: “In a relaxed atmosphere one evening after a day of testing, we threw out lots of ideas about how we could improve performance. One of them was a supporting motor – and it’s an idea I just couldn’t shake. I found the idea of being able to jump from my local mountain wearing the wingsuit and land in my garden. Fascinating.”

“I quickly came up with the idea of an impeller, in other words a propeller enclosed by a ring or tube-shaped housing. However, a fuel-powered or conventional motor was out of the question,” Salzmann points out. “Sustainability is very important to me, and something I try to live my everyday life by.”

“I enjoy nature from the air and on the ground – that’s why I aim to consistently follow the path of sustainability even when it comes to mobility. Thanks in no small part to the support of BMW i, the progress in electrification has made my dream possible,” he added. 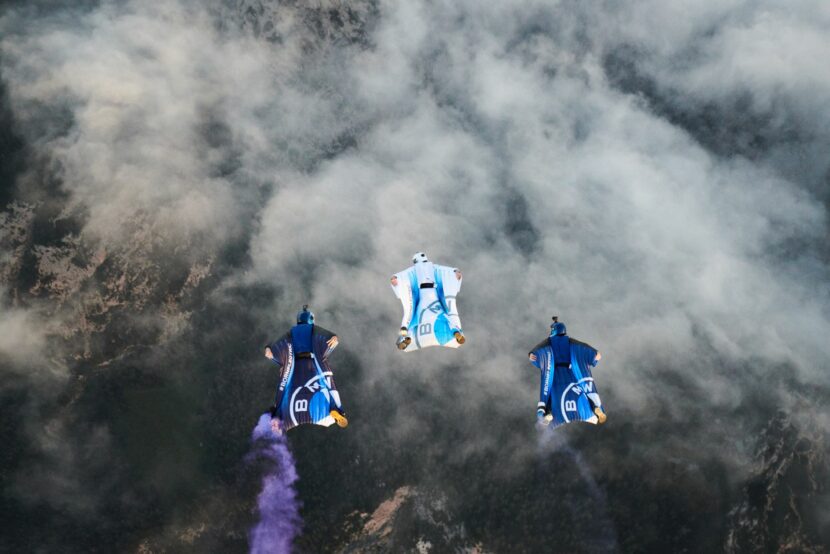 The innovative drive module and the likewise entirely newly designed wingsuit were developed in a cooperation between BMW i, Designworks and Salzmann. The result is an extremely powerful, compact and light drive and energy storage package for a unique flying experience with the Electrified Wingsuit by BMW i.

The fly unit of the Electrified Wingsuit by BMW i comprises two encased carbon propellers, so-called impellers, each delivering a power output of 7.5 kW, a speed of around 25,000 rpm and a total output of 15 kW, which is available for approximately 5 minutes.

The design of the drive unit and the likewise exclusively developed wingsuit is the result of a cooperation between Peter Salzmann and the creative team from Designworks. The electric twin-propeller drive system including an energy storage unit were perfectly integrated into the front of the wing suit. Before setting off into the wild, the whole suit was tested at the BMW Group Aerodynamics Testing Center in Munich. 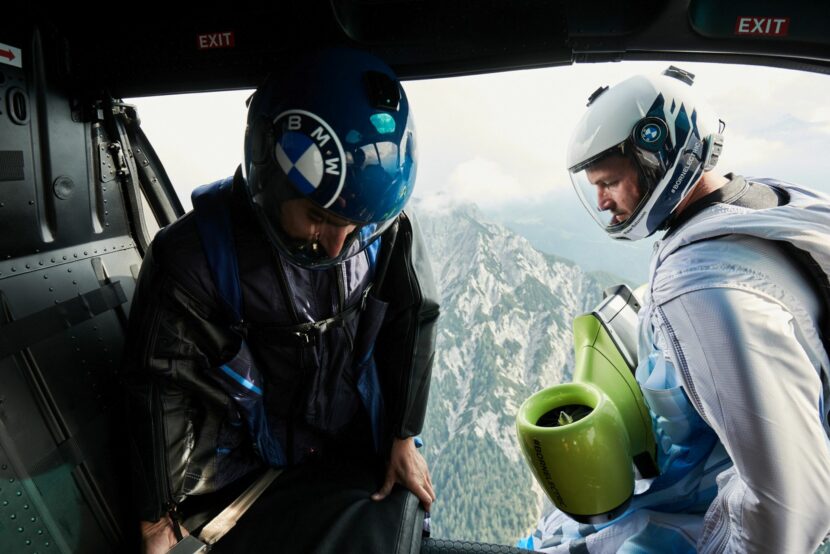 The aim of the electric drive system is to increase the performance of the wingsuit in order to achieve a better constant glide flight, thus allowing longer distances to be covered. Upon activation, Salzmann explains, the pilot experiences immediate acceleration, allowing them to fly at speeds of more than 300 km/h. For the maiden flight with the Electrified Wingsuit by BMW i Salzmann was flown by helicopter together with two other wingsuit pilots over the mountain tops of his Austrian homeland.

Directly after the jump from an altitude of 3,000 meters, all three flew in formation in the direction of a mountain massif. With the aid of the electric drive Salzmann accelerated faster than his colleagues and was able to fly across the peak in steep flight.

After flying a further curve, he met up with the other two pilots who had flown in glide flight around the mountain. The three wingsuit pilots finally opened their parachutes and landed at the agreed destination. And yes, it’s as cool as it sounds. Just watch the video below if you’re not convinced.