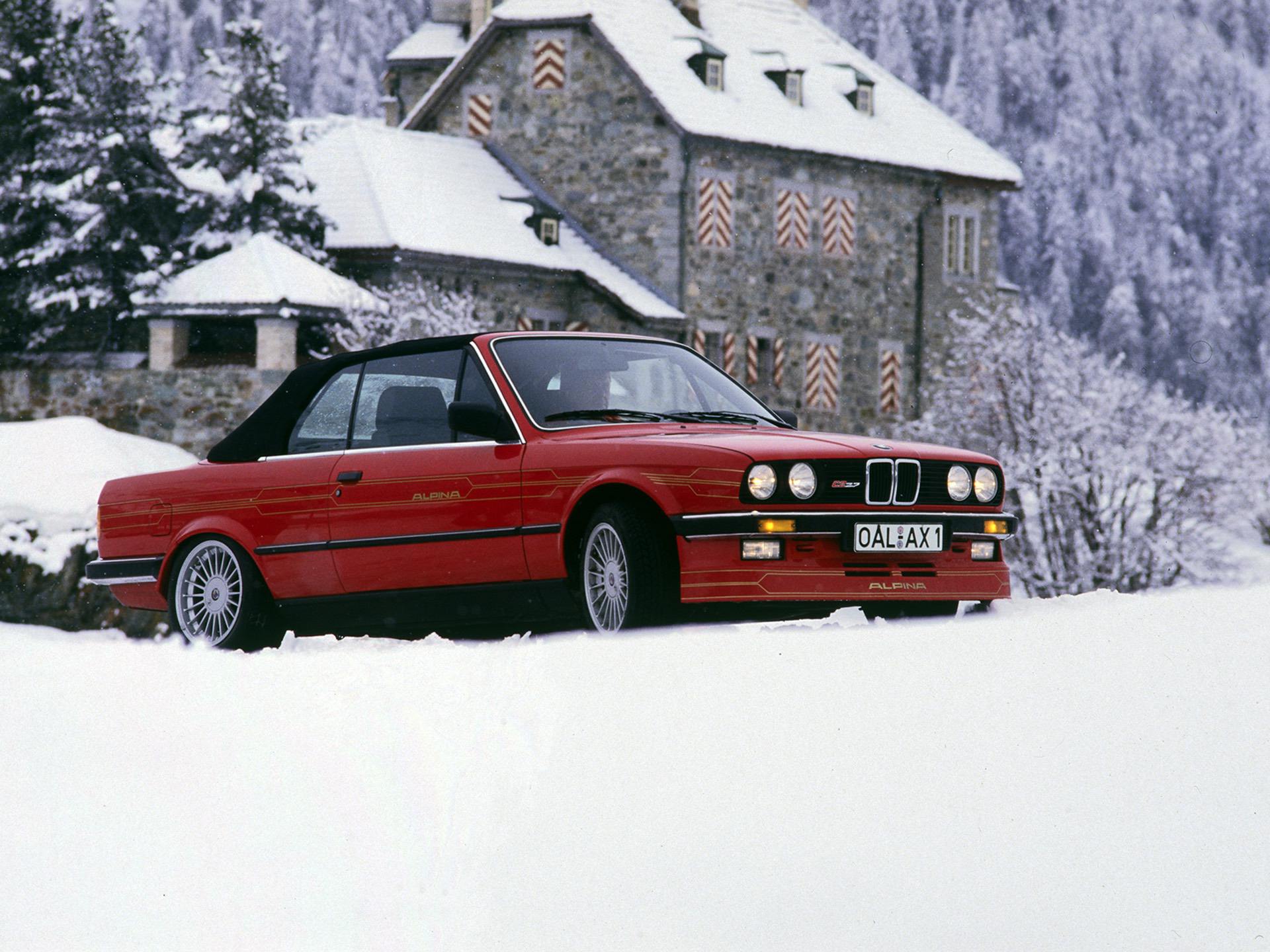 Life’s rough as an automobile manufacturer. Legalization is expensive, and when there is no guarantee a model will sell, it’s hard to make a solid business case for it to be introduced in so-called “niche” markets – such as a foreign country. Ranging from practical and fun wagons to powerful Autobahn cruisers, it’s pretty clear that in some respects, the US market missed out on some real gems. With JDM import companies becoming all the rage lately, it’s hard to ignore some of the cars that may soon become available to the US enthusiasts – here’s a small sampling of our eventual options.

Coincidentally sharing some naming nomenclature with many essential vitamins, it might not be accidental – many ALPINA offerings are just what you need. Staring with the second generation E30 ALPINA car, the C2 2.7 Allrad. Receiving AWD and 20 more horsepower than its now iconic M-division counterpart.

Sadly, a majority of these very rare C2 variants (and their later, catalytic-converter equipped “C2 Katalystor” cars) were optioned with automatic transmissions, whereas their M3 brethren only received a manual. Most recent sales on Bring-a-Trailer have placed these firmly in the 25,000-40,000-dollar mark, which isn’t bad considering only a handful of these were ever made.

You could even get an ALPINA version of the 8 Series, featuring the 5.7L S70 (yes, that S70 from the McLaren…), and a claimed top speed of an aerodynamically oblivious 186 mph.

But the sweet spot was definitely the ALPINA B10 Bi-Turbo, the E34 5 Series beautifully reimagined as a full-fledged symphony of sublimated speed. As the name denotes, the E34 B10 received a notoriously already-stout M30 engine with forged Mahle pistons, a reworked camshaft, bespoke manifolds, and two Garrett turbochargers.

Rivaling RUF Porsches, the Lamborghini Diablo, and the iconic Ferrari F40, this four door phenom was also the fastest sedan money could buy in 1991, with a top speed around 180 mph. The ALPINA B10 is the best of a good crowd. Recent auctions value this car somewhere in the $60-70k range – and with only 507 of these sleeper speed demons ever built, I doubt they’ll get any cheaper.

Europe also got a ton of “touring” models of cars that that the US was never offered – the 3 Series wagons representing the best value. The E30 Touring originally never planned for release anywhere – but thanks to the hard work of Max Reisböck, was eventually manufactured from 1987 until the end of the E30’s life cycle.

By the way, if you don’t know about Max – he’s the BMW engineer who bought a crashed E30 sedan and built his own touring model in his garage for around $13k all in, then presented it to BMW, who kept the car and used it as a template for the production E30 Touring. I wonder if that would work today?

Anyway, E30 Tourings are fun, unique, and practical – offered in automatic or manual flavor, with four or six cylinders, and rear or all-wheel drive. Lots of options and versatility when it comes to the E30 touring, and that’s even before counting the numerous engine-swapped cars that are out there.

E36 Tourings are just as interesting, and largely deciding between these and the E30s are a simple matter of taste. The E36 retains basically the same options, but with a little more power and just a little more refinement that a “newer” chassis offers. Of course, for a fraction of the price, you can pick up an already-US legal E36 hatch (the 318ti), but that’s just a little bit less interesting.

Let’s go back in time a little bit. 1971 brought with it the 02 Touring, chassis code E6. Engine offerings are limited, all being basically similar M10 inline four-cylinder engines. The 2002 tii Touring gets the highest output, with an obscene 130 hp at 5800 rpm, good to eventually get the Touring to a top speed of 118 mph.

At first glance, there isn’t a hugely technical reason to buy the 02 over the E30 or E36, but style goes a long way – and the E6 has it in spades. You could even get these with an optional “Rally Package”, sporting lighter alloy wheels, Recaro seats and fog lights.

Prices for these fairly rare cars sit around $30,000 and go up from there depending on condition and configuration, which is a bit higher than the E30s and E36s – but you probably won’t see another one in your neighborhood, which is worth a certain premium, I suppose.

Most enthusiasts are almost hyper aware of the fact that BMW’s M division hasn’t always been very kind about sharing its highest-performing cars with the United States. Though most agree that the M3 is a fantastic driving car and always has been, Europe got a few special additions that made the experience just a little bit more comprehensive than its US counterparts.

The E30 M3 Sport Evolution was a tuned up, trimmed down version that just did everything better than the original. This car has more press time than a Seattle coffee shop, so I won’t go into too much detail here. The headline reads bigger wheels and rolled fenders, aggressive suspension modifications, more power (238 hp from a modified S14), and less weight (thinner glass and extra cooling ducts).

Oh, and a crazy three-way adjustable rear wing. Oh, also, it’s incredibly rare – only about 600 were made. Happy hunting.

Speaking of cars with the media coverage equivalent to a Verizon service map, no “Euro BMW” list would be complete without at least a mention of the apparent monument to driver’s cars that is the E46 M3 CSL. The S54 under the hood gets a 30 hp bump, and BMW made extensive use of lightweight materials, slimming the car down to a BMW-quoted 3054 lbs, which is impressively low weight for a car like this.

Retooled traction control systems and larger wheels and brakes ensure the chassis is prepared to handle the extra power, and a quicker steering rack reminds us that this car was one of the most track-ready out of the box cars the world had seen in the early 2000s. But, the US never got to bear witness, because, well, we never got one. 1358 CSLs were sold, to everywhere else in the world.

The colonies got a much worse deal on the E36 M3. Whereas most of the world received the S50B30 found in the European-spec car (good for 286 hp), America instead got the S50B30US, which is basically just a slightly tuned up version of the non-M counterpart.

Then it got even worse – around the time that the S50 was replaced with the S52 in America, The S50B32 arrived in the Euro E36 M3, delivering an impressive 321 hp. By comparison, America’s S52 engine was now up to “junior roller coaster” power levels, at 240 hp, and provides just about as much drama, since the individual throttle bodies that make the S50 quite special are notably absent from it.

Further disappointments include the lack of an M3 GT in America, which got a hotter S50B30, bespoke “British Racing Green” paint, big wing, and other goodies that improved an already stout chassis.

Yeah, yeah, I know. More wagons. But these cars are pretty special and definitely deserve their own section. These are truly some fantastic 5s. Starting with the E34 M5 Touring Elekta, we’re already far into “definitely not gonna see one of these in your neighborhood” territory.

The E34 M5 was never offered as a Touring in America, and only 20 of these in the world were “Elekta” specials – painted either silver or British Racing Green, over blue or hazelnut leather, respectively. All manufactured later in the E34’s life cycle, they got staggered 18” M Parallel wheels and black out trim, making this a seriously aggressive looking wagon.

The S38B38 inline-six is the hottest S38 BMW made, good for 340 hp and 295 lb-ft of torque and paired to a six-speed manual transmission. The last Elekta on Bring a Trailer sold for $120,500, and I don’t know of any others like it in the States. If you’re into exclusivity, this is probably the option for you.

The E60 M5 is generally regarded as a love-it-or-hate-it looking sedan that consumes savings accounts and turns it into a glorious V10 chorus. But that all changes when you move to Europe and feast your eyes on one of the only V10-powered station wagons in the world.

Well…actually, not much changes – you’re stuck with the same SMG III transmission (they never received the manual S85 cars in Europe), you’ll still have to treat throttle actuators and rod bearings as if they’re consumables, but you’ll be rewarded with the melodious sound of ten cylinders cranking out 500 hp all the way to 8000 rpm, in a practical and fashionable wagon.

Only 1000 were made unfortunately, which means actually finding one might be a bit of a process – not to mention you’ve got a bit of a wait until you can import one to the States. 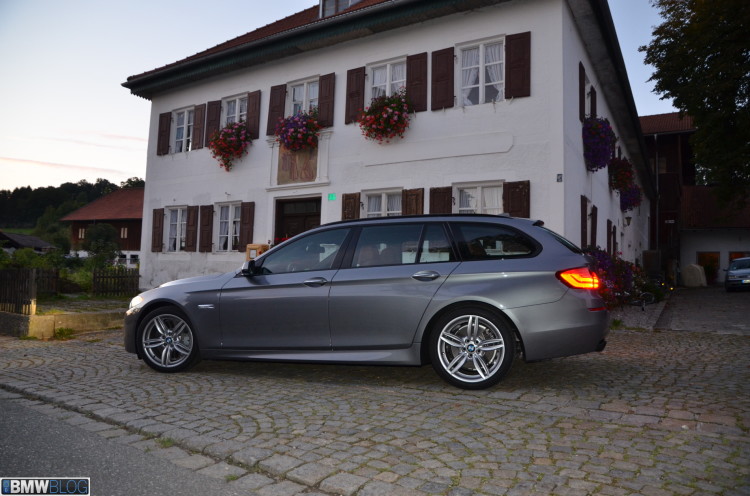 More recently, the M550d xDrive Touring makes leaves a bit of an impression by touting a quad-turbocharged (yes, that means four turbos) diesel V8 cranking out 560 lb-ft of torque. Replacing the obviously underpowered outgoing tri-turbo car, this one is superior in almost all respects – lighter, faster, and, well, one more turbocharger never hurt anyone.

The sprint to sixty takes just under four and a half seconds, making this one heck of a rowdy wagon. Who knows what pricing will look like for these cars in 25 years, but I think it’s safe to say that there won’t be many quad-turbo diesels running around by then.

So, there you have it. From 500 hp wagons to 130 hp hatchbacks from the 70s, BMW’s offerings that never made it across the ocean still have something for everyone. While I think the most important models were well-highlighted, honorable mention should be given to the M140i hatches from a few years ago, which received the B58 turbo-six and maintained RWD (but xDrive is still an option for those craving hard launches).

The replacement for that was the M135i, which has sadly migrated to the same platform as the X2 and 2 Gran Coupe – a FWD biased AWD architecture. The M340d is also an intriguing offering, offering 516 lb-ft of torque in wagon or sedan flavors, good for a 0-60 in 4.5 – 5.0 seconds depending on body style.

It’s tough to decide which one I’d have off this list, but I think the E6 Touring definitely has the most personality. I’d go for an Elekta, if it wasn’t for the prohibitive price tag. Regardless your preference, there’s almost certainly at least one car here you could lust after. And if you live in North America, you might feel just a little bit cheated.