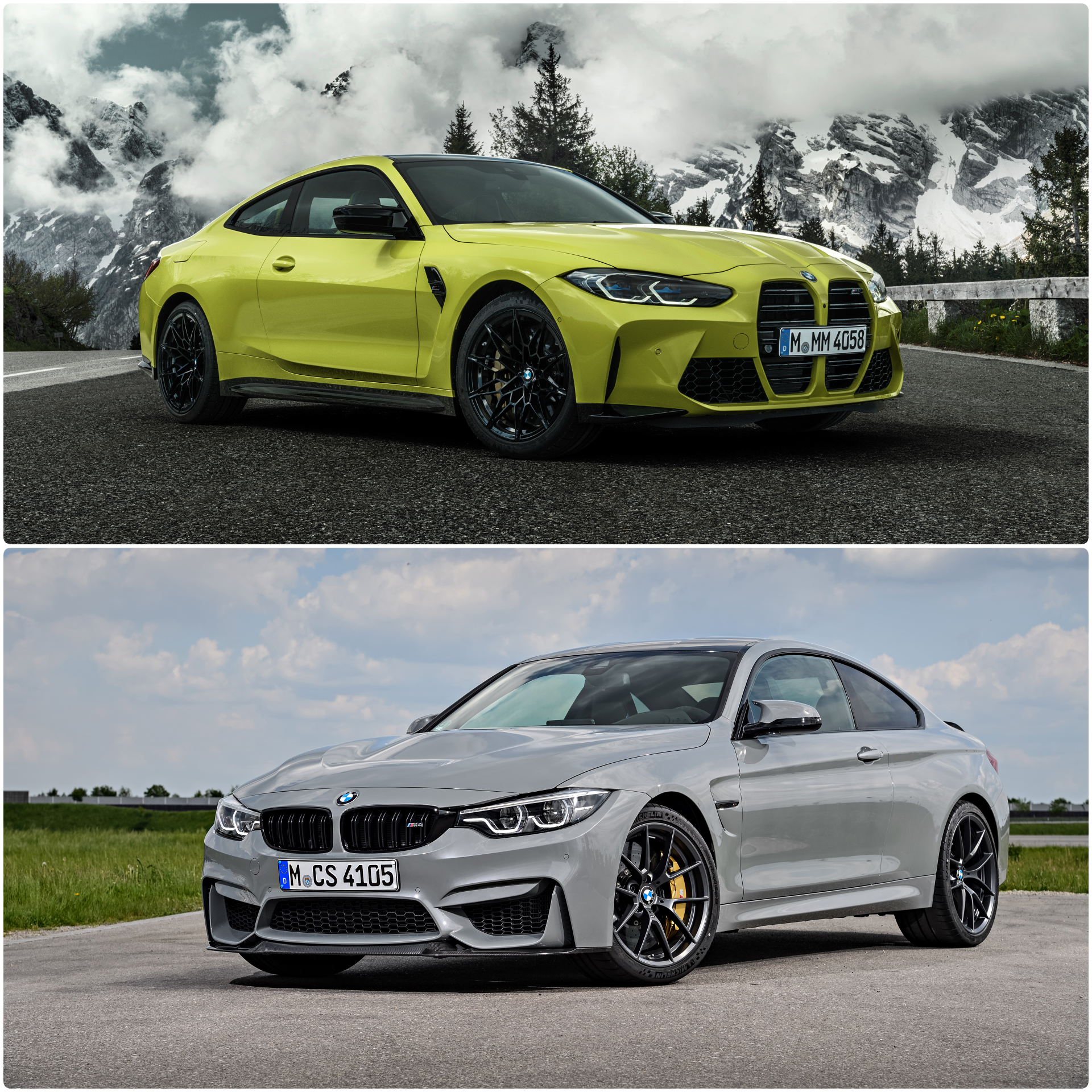 As the new M4 generation is now officially out, it is time to revisit the old F82 generation and analyze how the design language evolved and morphed into the G82 model series. First of all, it is sensible to say that we are dealing with highly different exponents of the M4 family in terms of visual identity. The only similarities are obviously the badge and the pure-bred M philosophy instilled in the driving technology.

The second generation of the M4 ventures in a new styling territory and marks a decisive and controversial departure from the preceding F82 model. The designers looked for more individuality and differentiation and we can say they managed a brilliant achievement with the new G82 M4. 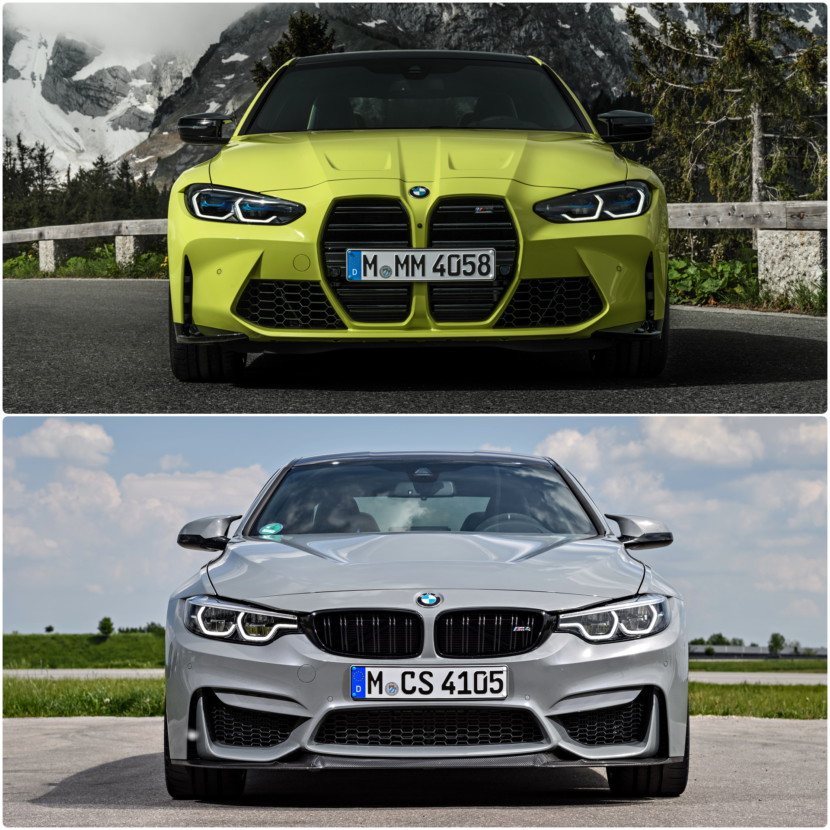 If the outgoing 2-door M4 is more classic and complex in its approach, the new M4 Coupe exposes a puristic, clean and enthralling design, that is purposely intended to make a powerful statement. For the first time, the front end of the M4 is clearly individualized compared to the standard non-M G22 4 Series.

The G82 is one bold and ravishing M4 Coupe. Bearer of a new hallmark M identity, the new high-performance coupe from Garching leaves prejudices behind and proposes a new M visual front end signature with the upright, vertically-developed, separated kidneys with horizontal, double louvres. Evolving from the traditional, transversely-disposed kidney grille was an act of artistic courage. 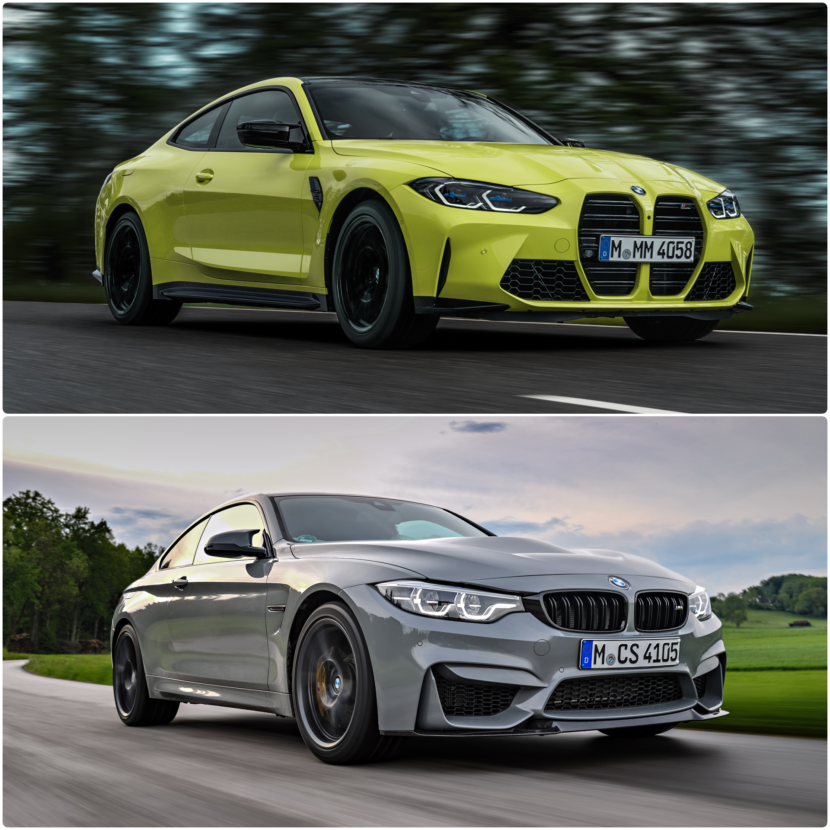 The eyes of the new G82 M4 are also visually expressive, thanks to their streamlined shape and the stylish graphics, further augmented by the BMW Laserlight technology and the optional BMW Individual Shadowline darkened inlays. They are no longer connected to the kidneys, like in the case of F82 M4.

If the preceding generation added more complexity in shaping the a generous central air intakes and two additional ones, the new M4 comes up with a cleaner approach, defined by some essential side Air Curtains and redesigned air intakes nearing the tall kidneys.

All in all, we can say that the evolution from F82 to G82 is a complete revolution, but one thing’s for sure: both M4 models are looking cool and powerful, with a distinctive and highly appealing philosophy. What’s more, the design of the F82 will age pretty well. 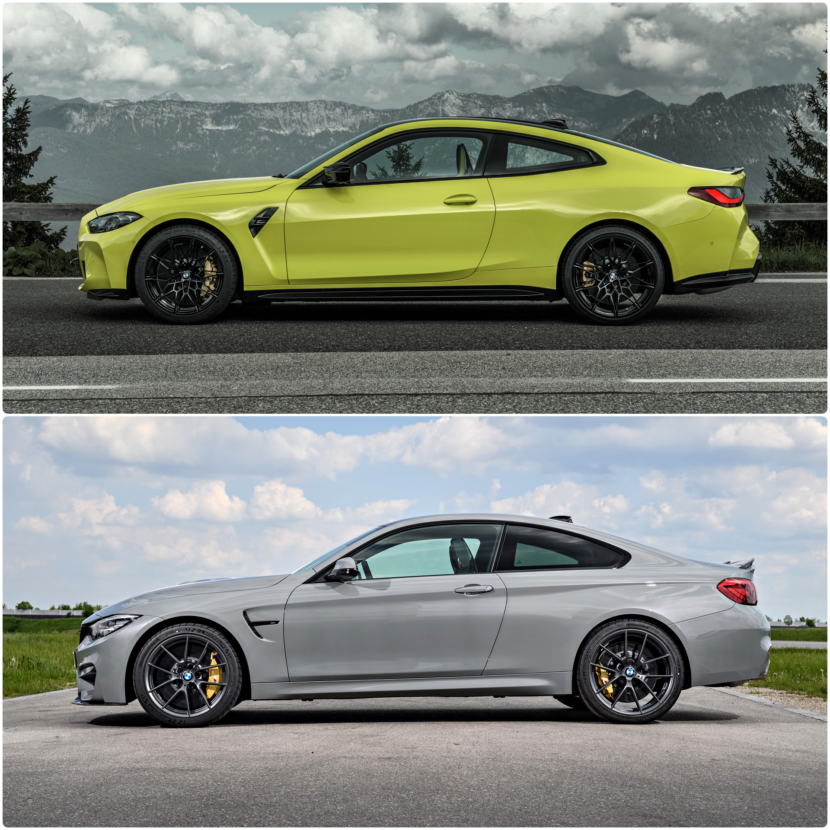 Comparing the sides, the striking differences are further revealed. The new generation of the M4 Coupe comes up with a reshaped silhouette, that is stripped to its bare essentials. The detailing is clean, the side Air Breather is revamped and the window line is no longer straight, but upwards-tilting towards the rear.

Of all, the most striking novelty is the reinterpreted Hofmeister kink, which has already debuted on the G22 4 Series this summer. The pronounced, straight character line of the F82 M4 is now more subtly styled on the G82. Furthermore, the new generation comes up with a design element inspired by motorsport, that surrounds the car and also actively improves the aerodynamics.

The design of the outgoing M4 can be interpreted as a classic, baroque exercise, while the new M4 is fit for the future, with clearly defined volumes and less unneeded complexity. It again goes on to show the immense development in design trends over a single generation of the same model. 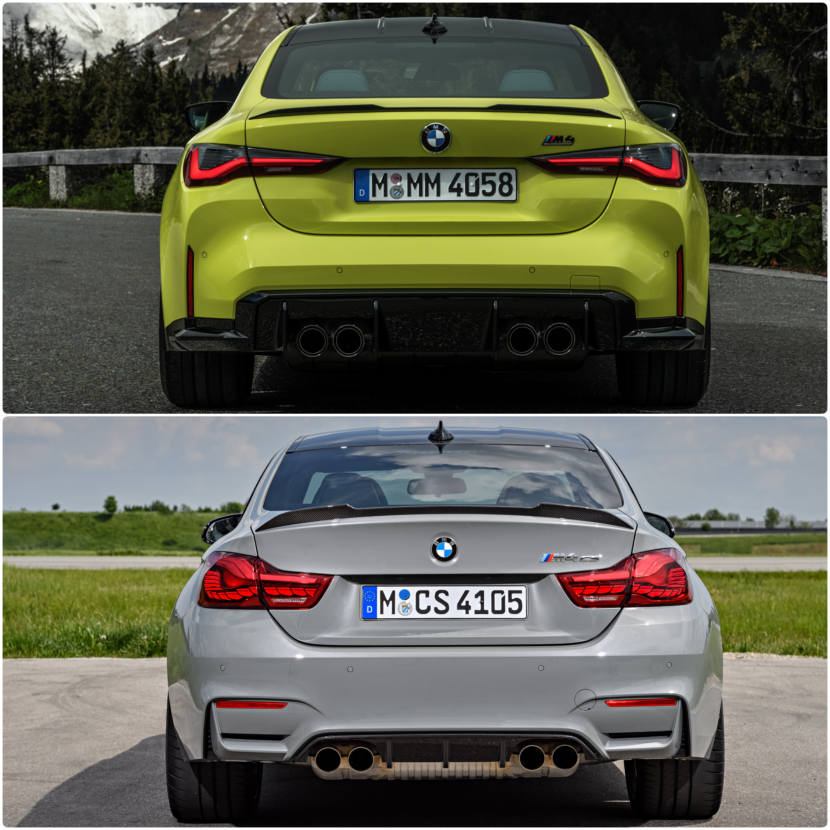 Going on towards the rear end, the differences are even more accentuated. Of course, both M4 generations are clearly recognizable as a true BMW M model. The rear lights of the G82 are slimmer and less intricate in their inner graphics, whereas the F82 approached a more sophisticated path.

The new M4 looks more powerful than its predecessor thanks to the clearly structured sections on the tail area, defined by more creases and an imposing diffuser with equally remarkable circular quad exhausts that gather towards the center line. 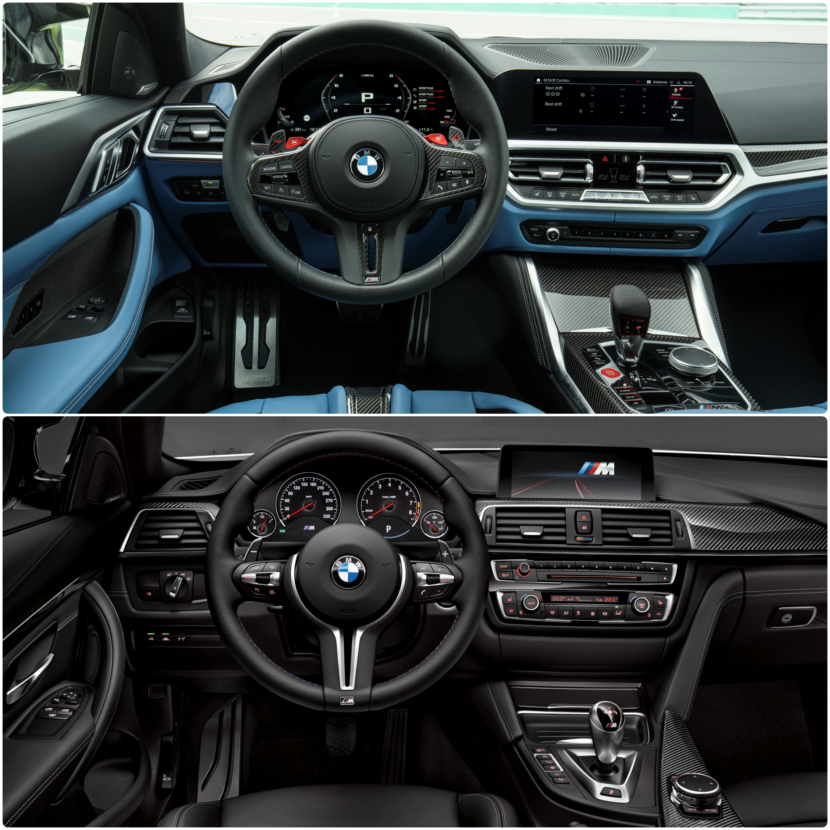 When it comes to dashboard design, we can clearly see a logical evolution towards a minimalistic architecture in the case of the M4, which still emphasizes the unmistakable BMW styling cues and ergonomics. The F82 M4, conceived more than 6 years ago, features many buttons and physical controls, whereas the new G82 M4 is confident with doing away with most of them.

The dashboard of the new M4 Coupe looks decisively tridimensional and clearly structured, with cleverly-defined volumes and surfaces and with a a better integration of the central Control Display in the overall design. The F82 is again the classic of the two, preferring artistic form over function. But, again, each of the two M4 generations is particularly engaging and sending a clear message of their M pedigree. 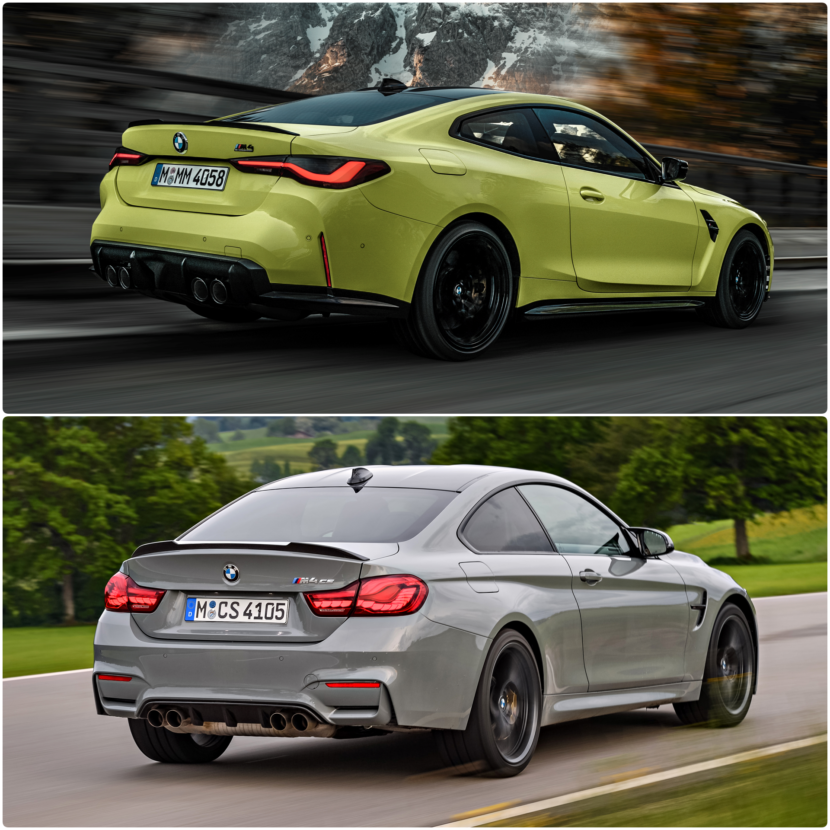 In the end, it all comes down to personal taste, but we can conclude that both the previous F82 series and the new G82 model are proud flagships of the M4 family. Which one do you prefer?