The new BMW iX3 and the Mercedes-Benz EQC go head-to-head in a visual comparison aiming to find out which of the two looks more futuristic and electrifying.

Comparisons are now inevitable, as the new iX3 electric SAV enters the automotive scene. The G08 generation is aimed directly at the German competitors, Audi and Mercedes-Benz, and focuses on steering away the clients towards the new Munich proposition in the segment.

First of all, it’s obvious to say that we’ll be comparing two very opposite models, with highly different design philosophies. It is sensible to conclude that each of them cater to a very select audience and both are worthy of their badge, styling-wise.

While the iX3 is straightly derived from the conventional X3 and borrows most of its design, the EQC is an entirely new model under the EQ technology brand of Mercedes-Benz.

But, in the end, it all comes down to personal taste. Even though the electric Merc SUV is slightly larger in length, it is curvier and with softer edges, which might not be everyone’s cup of tea. Of course, styling is subjective so customers’ take on the car could be different.

On the other hand, the new iX3 looks more mature, with an exterior styling that is certain to age pretty well. That’s mostly achieved thanks to excellent design of the “regular” X3.

The front-end is taut and powerful, with a cohesive integration of the hallmark BMW i features, such as the blue accents, the filled pattern of the kidney grille and the aerodynamically penned front apron.

At 4.73 meters, the BMW iX3 is pretty similar in length to the slightly longer EQC, which boasts 4.76 meters. Again, tastes are decisive here as well, but to me, the silhouette of the G08 exudes more muscularity than the softer and more classic Merc. The iX3 sports a few accents and defining character lines, whereas the EQC is too clean in its surfacing.

The Aerodynamic Wheels of the new iX3 also contributes to creating the desired high-tech attitude and visual effect. While the EQC sports some interesting one-piece tail lights that look very nice when lit up, the iX3 sticks to the classic T-shaped lamps already familiar from the conventional G01 X3.

Apart from the iX3 badge, the electric Bimmer SAV signals its zero-emission powertrain thanks to the BMW i blue profile installed on the spots where the exhaust would have otherwise been positioned.

In the cabin, both models follow highly different paths. The Merc EQC is more daring, proposing a digital and minimalistic dashboard, centered around the defining large display seen on many models from Stuttgart.

At the same time, the new BMW iX3 plays a safer card by grafting on the functional dashboard of the G01 X3. The blue accents on the electronic gear shifter, the engine start/stop button, the “eDrive” logo displayed in the digital instrument cluster and the BMW i inscription on the door sills are the only elements setting the electric SAV apart from its ICE siblings.

Even though one might consider the iX3 is a missed opportunity, in my opinion, it is actually the other way round. The G08 offers more for less: it costs less than the EQC, it boasts an almost complete equipment package and it is good for a higher pure electric range compared to the EQC. At least on the WLTP cycle. 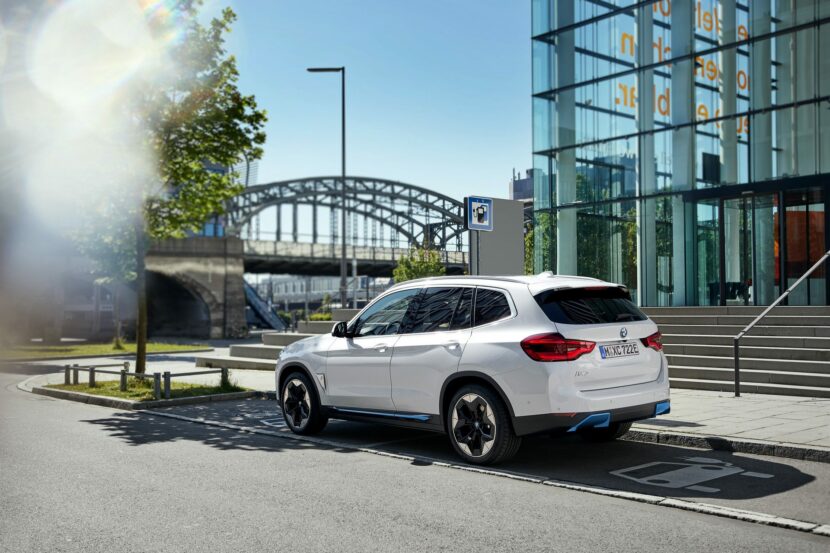 Furthermore, it also weighs less as it only comes with rear-wheel drive, in true BMW tradition. Given the fact that the iX3 will mostly be driven around the city, the xDrive chassis is more or less compulsory and will certainly not make a strong difference if ever offered.

Of course, I need to acknowledge that all-wheel drive plays an important role in some markets around the world,  so this is where the EQC might have the edge.

In my opinion, the new BMW iX3 is the winner in the visual contest with the Mercedes-Benz EQC. But again, styling is subjective so what’s your pick in this comparison?