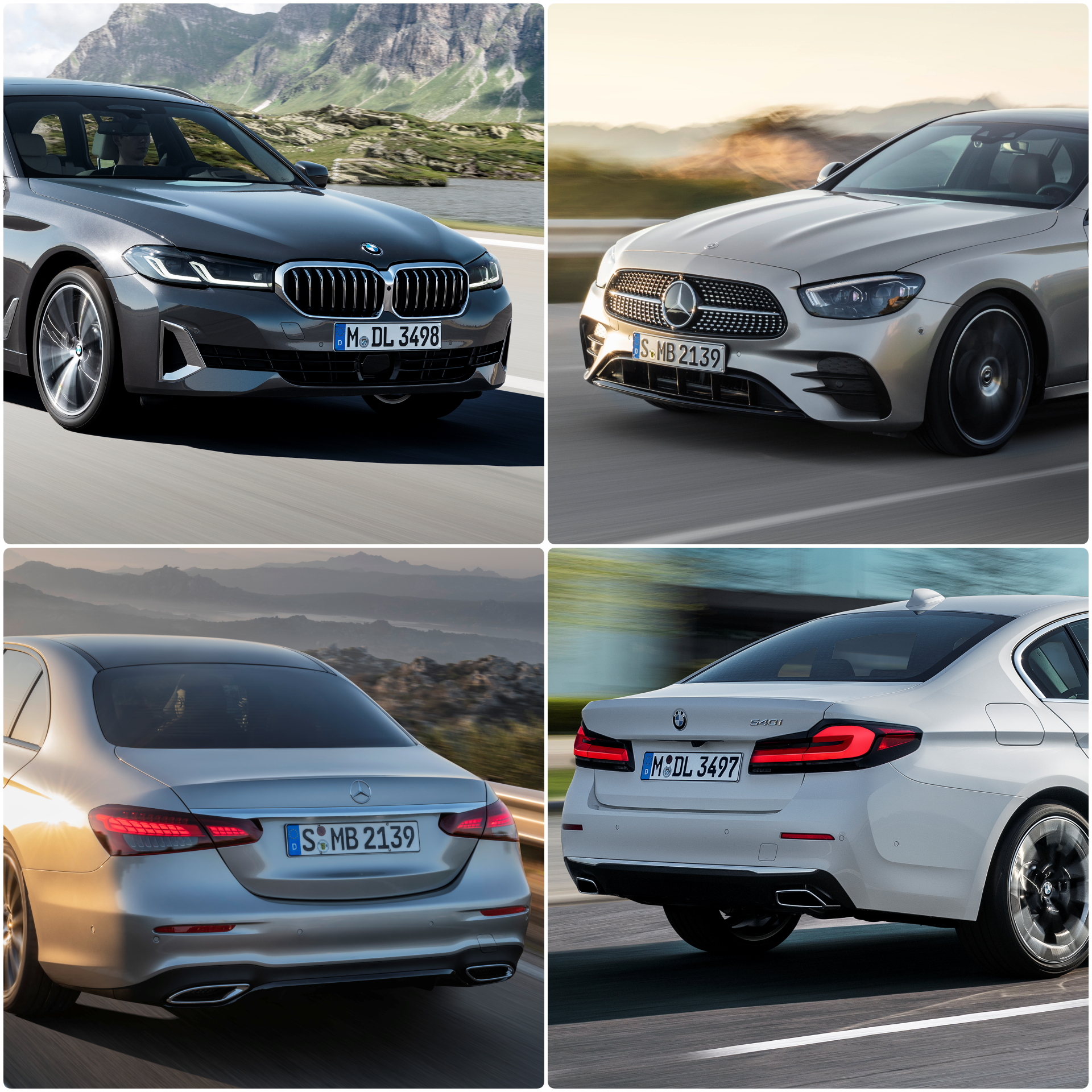 In this visual comparison contest, we’ll find out how the new BMW 5 Series stacks up against its all-time arch-rival: the Mercedes-Benz E-Class. To begin with, it is safe to assume that even though both contenders share the same appurtenance to the premium executive segment, the two models have dramatically different philosophies when it comes to luxury.

While the Merc E-Class has always been the more comfortable, the 5 Series has always stood up ahead as the more dynamic choice of the two. 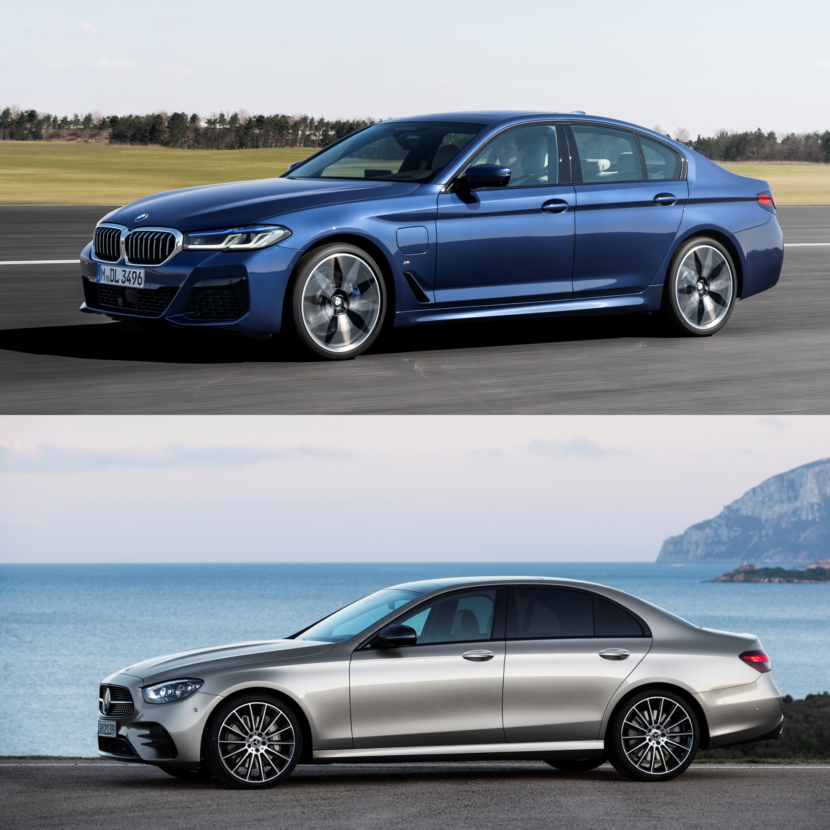 Both rivals are fully packed with the latest technology and each cater to their very own, select client audience. In the recent years, the E-Class managed to steal some of the 5 Series’ traditional clients, but the 5er has still managed to hold a large share of the segment.

When it comes to pure styling, the two companies exhibit completely opposite approaches. The E-Class is the more classic alternative, while the 5 Series retains the traditional, firmly established sports-oriented visual identity. 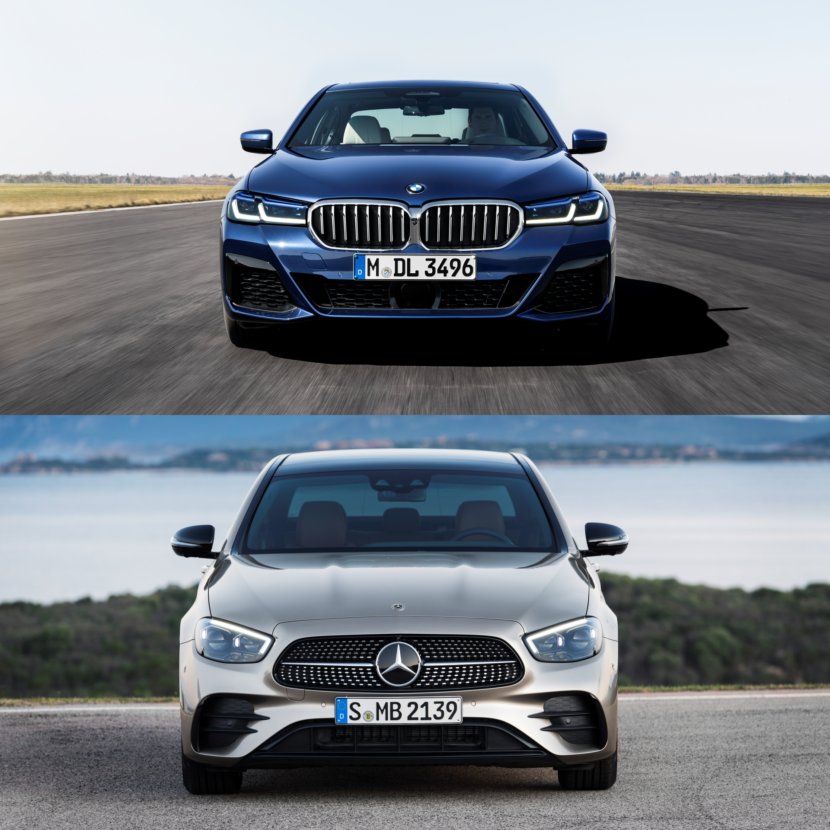 Judging by the front end design, the E-Class features a traditional grille on the EXCLUSIVE trim line, whereas the AMG Line receives the Star grille.

On the other side, the 5 Series remains faithful to its eye-catching kidney grille, which has now grown in overall, gaining a decisive tridimensional aura and rendering the Bimmer a muscular and powerful look. 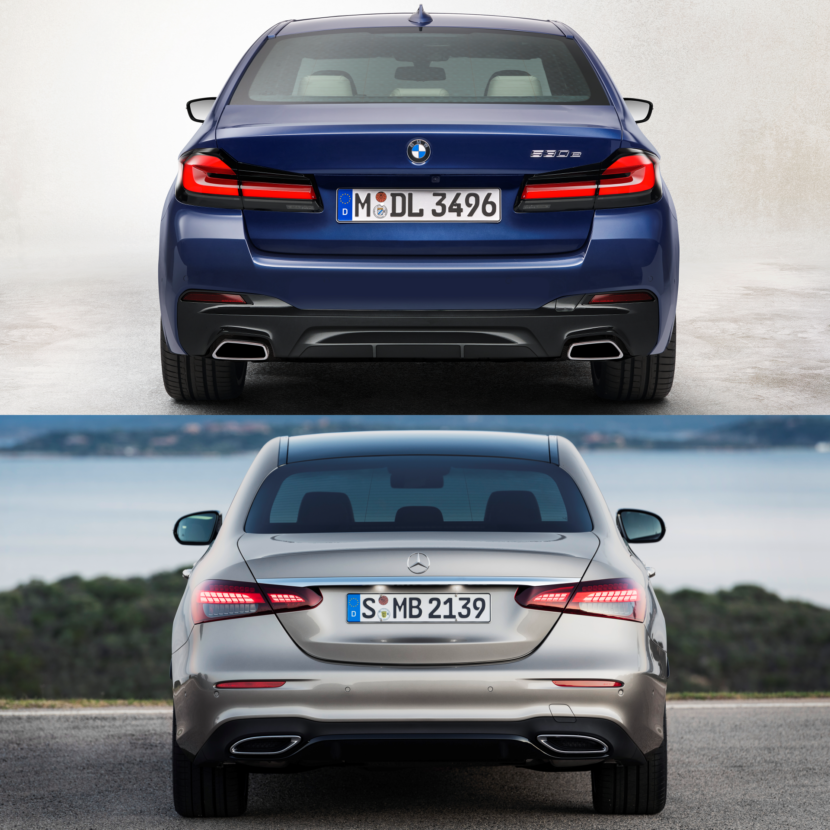 In the case of the E-Class, you immediately notice the design philosophy relying mostly on curved and round shapes and surfaces. The BMW 5 Series is mostly inspired by the 7 Series LCI, displaying straight, clearly-cut lines and elements which make it really stand apart from the crowd.

The “eyes” of the new 5 Series, with their iconic “L” signature lighting, also manage to look better than the E-Class design proposal, regardless if we are judging the dynamic M Sport against the AMG Line or the refined Luxury Line versus the EXCLUSIVE model from Stuttgart. 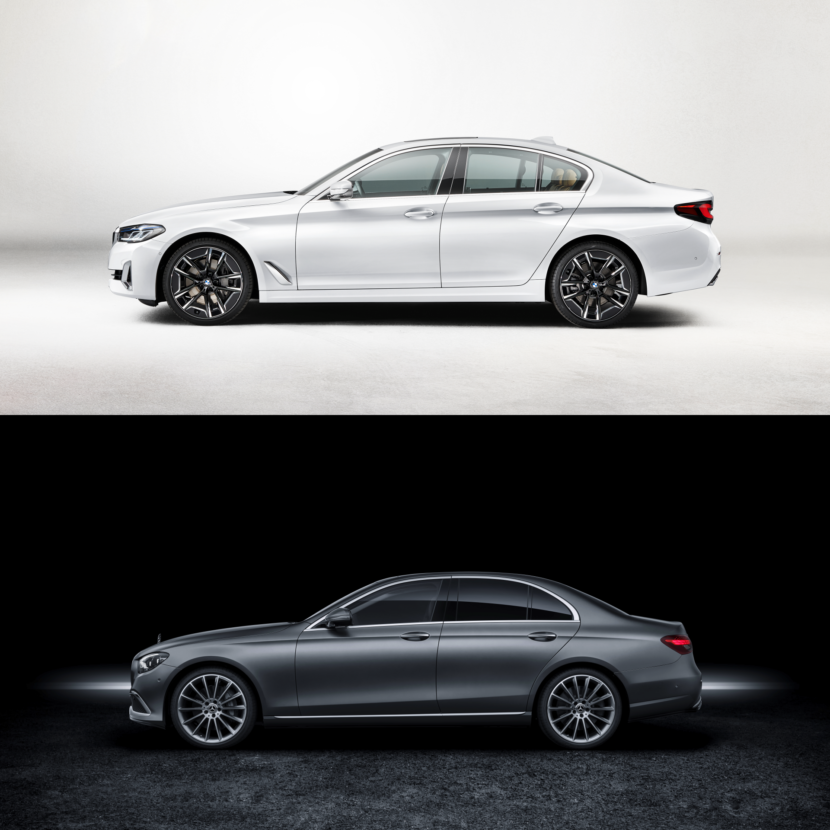 The side profiles of the two contenders are also exhibiting a brand-specific identity. Both the BMW 5 Series and the Mercedes-Benz E-Class are looking particularly classy and elegant.

The new 5 Series is defined by a complex interplay of character lines, with raised shoulders and a dynamic silhouette. By comparison, the E-Class is the advocate of a clean design. 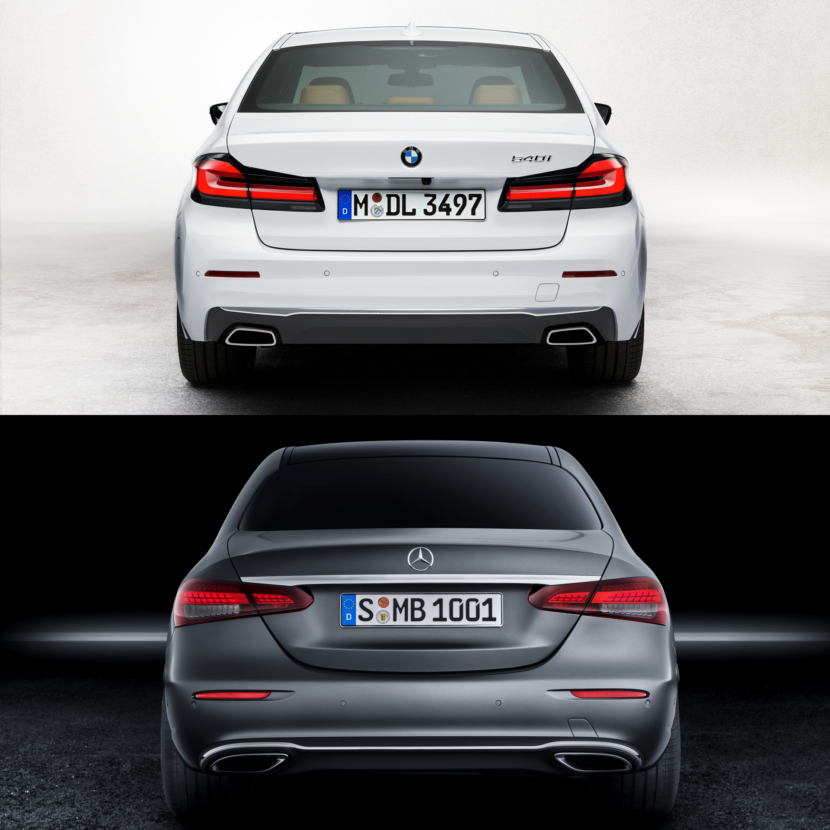 At the rear end, both models are in a class of their own. The E-Class now boasts triangular, horizontally-positioned tail lamps, which help add extra width to the back area.

On the other hand, the 5 Series manages to steal the show with its spectacular rear lights with darkened out section and the visually attractive, hallmark “L” inner graphics. 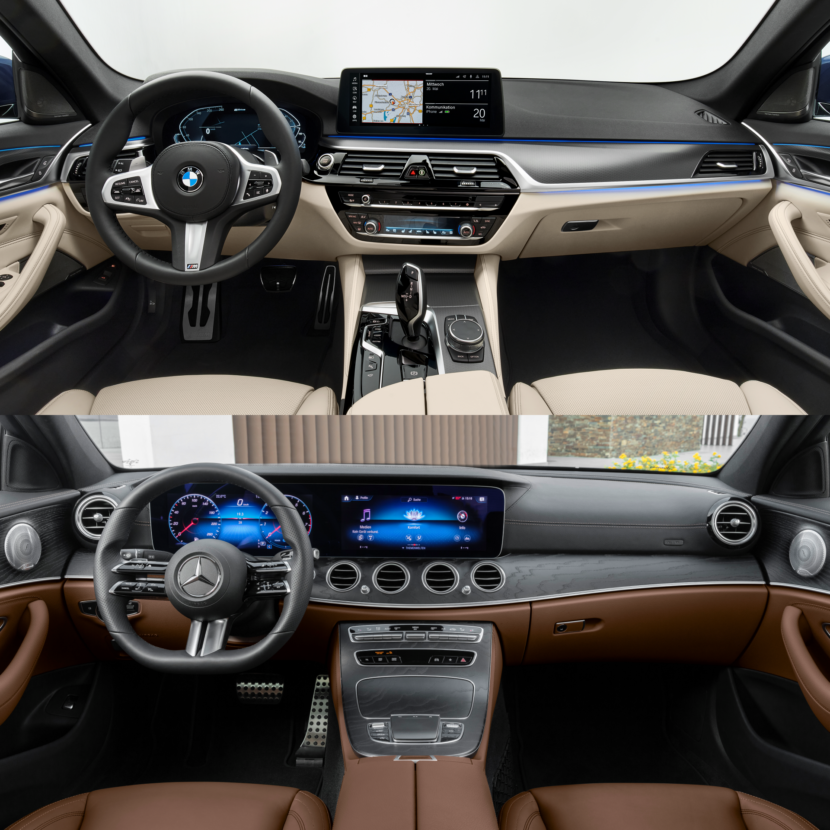 Going inside the two, we get to feel even more of the contrasting philosophies between BMW and Mercedes-Benz. The Munich-based constructor marches on with a purposely driver-oriented dashboard that blends in elements of both modern and classic architectures.

The E-Class approaches a different path in this respect. The dashboard of the Merc is aggregated around the large-sized digital display and the minimalistic design. In terms of perceived quality and premium feel, both the 5 Series and the E-Class are mostly on par. 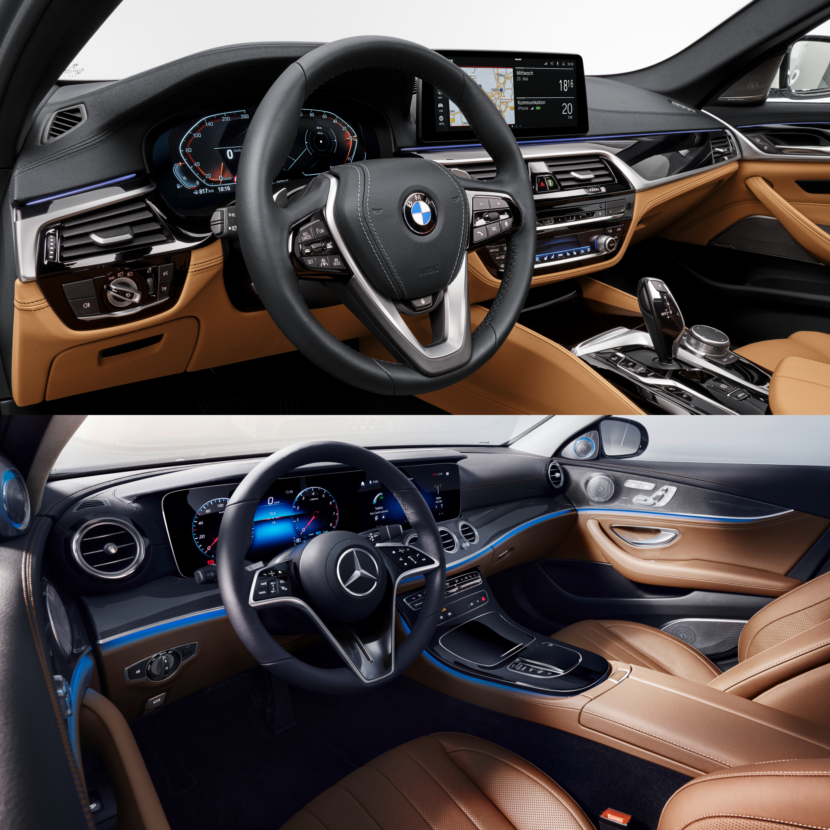 Of course, most BMW fans would pick the 5 Series over the E-Class. Yet, it’s fair to recognize that Mercedes-Benz has also done quite a brilliant job with its new E-Class facelift.

In my rankings, it is clear that the new BMW 5 Series nails it all in most categories of this photo comparison. But, as well, the Mercedes-Benz E-Class will always be its toughest and most remarkable competitor. 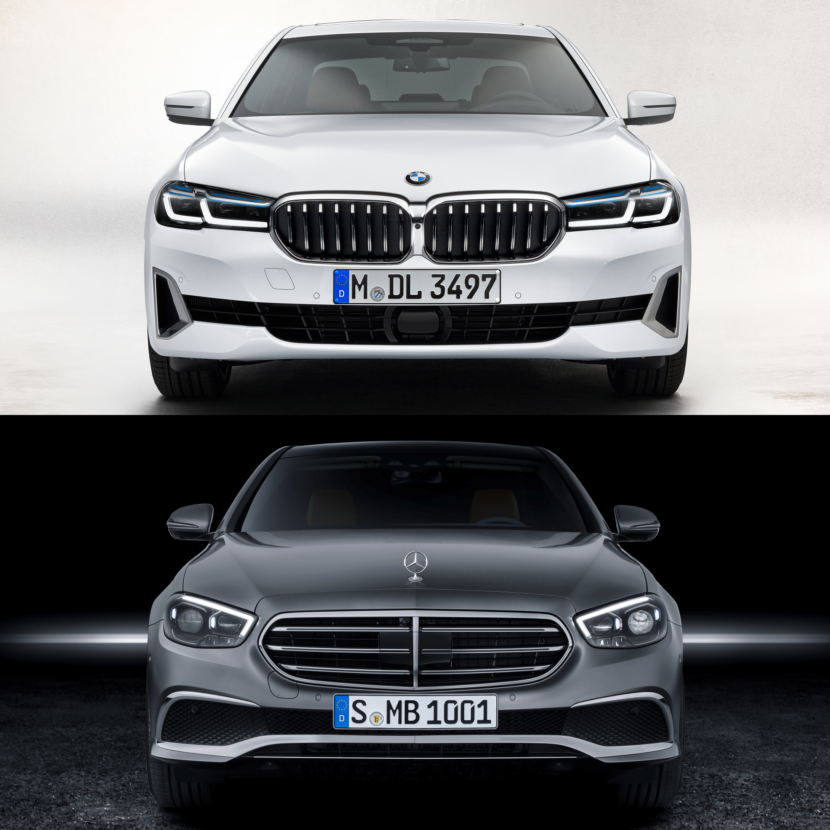 How about you? Tell us which is your winning pick in this battle.