Why BMW is a role model in overcoming hard times

Home » Why BMW is a role model in overcoming hard times

The BMW story has not always been smooth and easy. Yet every time crises arise, the company managed to cope with them and emerged more powerful after such challenging periods.

Ever since its birth in 1916, BMW has been often confronted with particularly difficult situations. This required innovative plans to be put into action in order to overcome the stressful context.

BMW has always been a visionary company, defined by skilled and motivated people, who have led the company forward and out of the crisis periods, only for it to become stronger and learn a lot from the past challenges it was subjected to.

Here is a short roundup of all the major, eventful periods BMW has encountered during its 104-year existence.

1919: Reliable engines and not just in the air 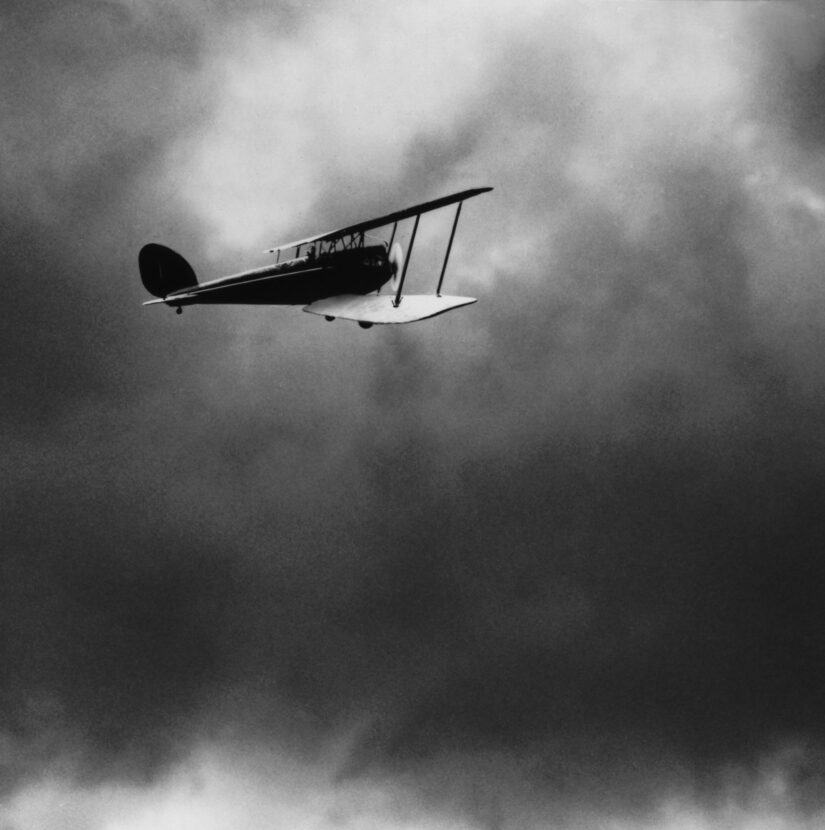 Having been established as an aircraft engine manufacturer in 1916 by Franz Josef Popp, BMW AG was producing producing a single type of airplane engine, that was widely recognized for its reliability: the BMW IIIa 6-cylinder aircraft engine. On June 17, 1919, a new type of powerplant, dubbed BMW IV, was flown for the first time at an altitude as high as 9,760 meters. 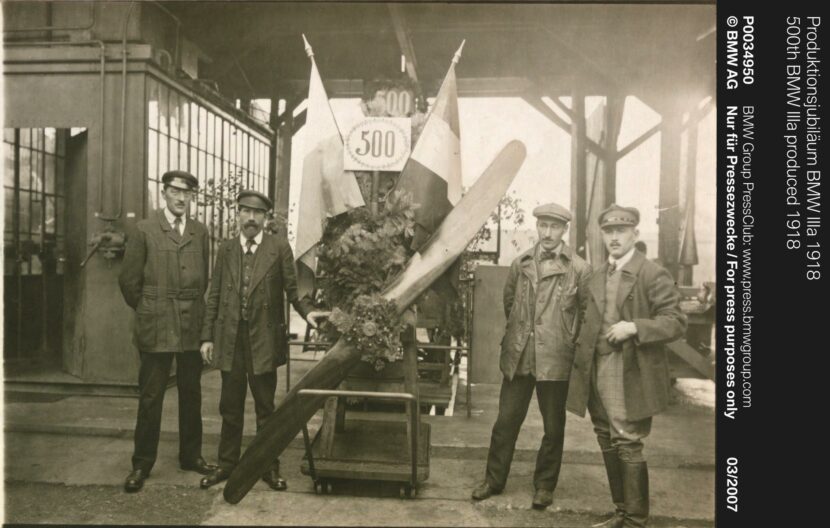 However, after World War I, the production of aircraft engines came under complete interdiction in Germany. So, BMW had to reinvent itself and reorient to other growing market segment. Thus, the “Bayern-Motor” or “Bavaria Engine” generation of units was born. BMW supplied this powerplants towards interested manufacturers of boats, trucks and busses. 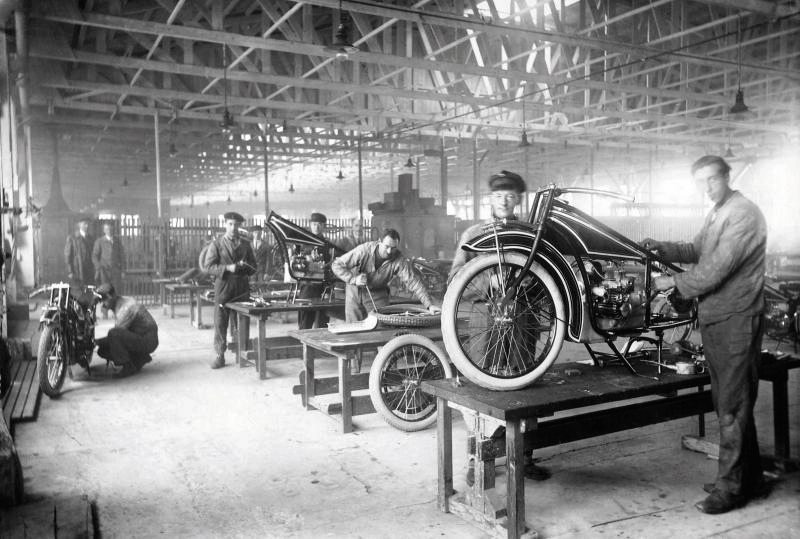 BMW AG had no time for respiro and in 1923, the young company was faced with yet another potentially dangerous challenge. By that year, BMW was known supplying the reliable “Bayern Kleinmotor” (“Bavaria Small Engine”) to the motorcycle manufacturer Victoria. When the company decided to equip its motorbikes with in-house developed powering units, sales of the Boxer engines produced by BMW have abruptly collapsed. 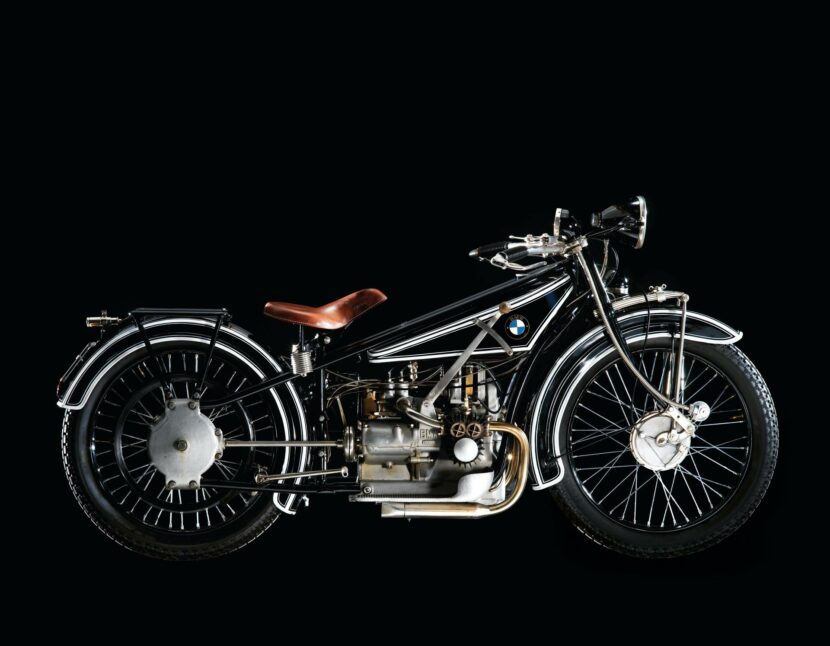 That is when the management of BMW AG took the daring decision to develop a whole new Boxer engine from scratch and install on what is considered to be the first-ever BMW vehicle in history: the BMW R32 motorbike.

Having made its official debut at the German Motor Show in 1923, the motorcycle was the opera of chief engineer Max Friz, who mastered the new Boxer engine and developed the R32 around this daring engine concept, with transversally-mounted cylinders. 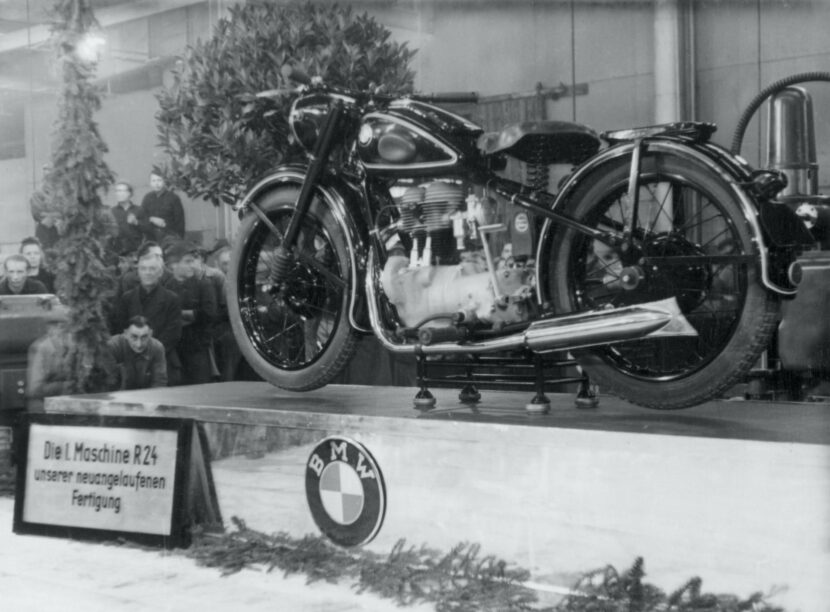 The post-World War II era came with new challenges for the entire manufacturing industry in Germany. BMW could not have avoided any impact and was deeply affected by the new political regime that divided the country in two parts. With the Eisenach automobile plant falling in the Eastern, Soviet-controlled region, it meant a total loss of the car production knowledge for BMW.

With the Munich-based factory having been severely damaged during the war, BMW had to reinvent itself once again. To survive yet again the distress, the company began producing pots, pans, fittings, agricultural implements and bicycles with a lightweight alloy frame on small scale.

After the authorities greenlighted the production of motor vehicles again across Germany, BMW has resumed production and started building the Boxer-powered R24 motorbike in Munich beginning with 1948. The motorcycle proved to be an immense sales success of the era, with over 12,000 sold. Its successor, the R25, managed to double that number. A year after the introduction of the R25, the R51/2 motorcycle with the popular Boxer engine followed.

1957: Faced with new market challenges in the motorcycle business

In 1954, BMW achieved a production rate of 30,000 per year. However, in a time frame of just 3 years, the market trend inverted and motorcycle were no longer sought after. With a declining interest, the BMW production of motorcycle decreased as low as just 5,400 units annually.

BMW had a safety net from various government clients. The motorcycle had proven to be popular within the Federal Police institution. The company continued to go against the market trend and the newly engineered /5 Series of motorcycle demonstrated the Motorrad division was not wrong in its prospects.

Having been marketed as a sports and leisure motorbike, with increased racing-inspired performance, the /5 Series enabled BMW to make a powerful comeback in the motorcycle business, maximizing the potential of the new market context.

By 1959, BMW was almost on the brink of going bankrupt. With intentionally misreported financial performance figures, the management of that era was looking to save BMW by fully selling it to Daimler AG.

Seeing that this move would have meant the total extinction of BMW as a brand and vehicle manufacturing company, a handful of dedicated shareholders have rejected the Daimler AG takeover offer and instead focused on a new path.

Led by visionary businessman Herbert Quandt, the team paved a whole new future for the company. With the help of the BMW 700 models and the newly developed BMW New Class premiered in September 1961, the salvation of the company was secured. By 1962, BMW had established itself as a competent premium automobile constructor. 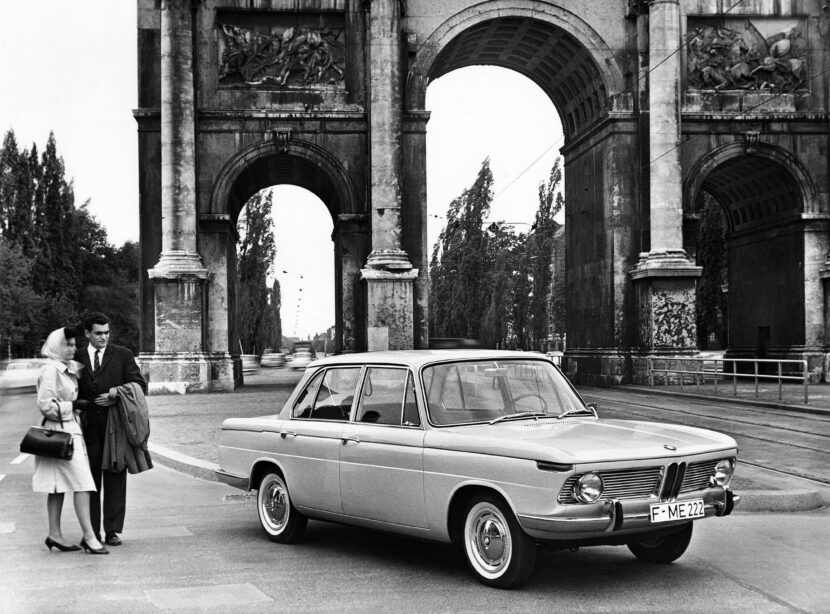 The oil crisis that stroke the planet in 1973 was one of the most significant occurring events after the Great Depression. Faced with traffic bans over the weekends and a drastic reduction in speed limits, BMW had to cope again with an adverse market trend.

Cars equipped with high displacement engine were no longer popular, as clients were now searching for more frugal alternatives. That is how the fuel-efficient BMW 518 (E12) and BMW 1502 models were conceived.

They proved to be particularly successful and by 1975, when the oil crisis eventually came off, the two models helped BMW achieve a strong sales record. The increase of 50% meant almost 78,000 new cars have been sold compared to 1973.

BMW emerged as powerful as it could have got back in those days, with both fuel-efficient and performance models on sale. In 1973, the company went again against market trend by opening the iconic “Four Cylinder” headquarter building in Munich and the BMW Museum. This is another proof of the immense potential for innovation and rebound capacity that BMW is so famous for.

1994: Making the most out of any opportunity 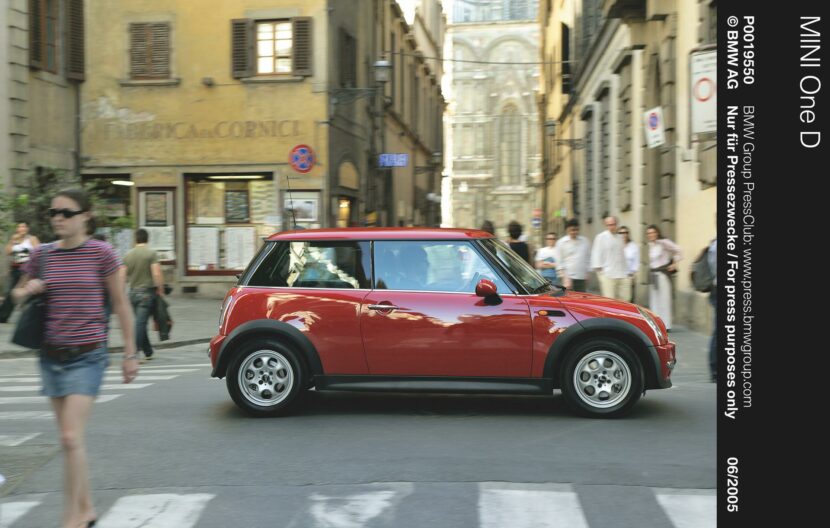 In 1994, BMW was already a firmly established premium carmaker. Looking for expansion, the management of BMW AG took the decision of acquiring Rover Group. While to most it might have looked like an uninspired decision, in the end it turned out quite well for BMW.

The benefits from this takeover have long been overestimated and, in the end, BMW gave up the Land Rover and Rover brands, but kept MINI and Rolls-Royce.

For the two iconic British brands, the fact they remained under the protective BMW umbrella meant the start of a new era. MINI bounced back with a new generation of the Cooper, while the Rolls-Royce that came in 2003 is recognized as the bestseller among high-end luxury limousines.

In time for the new Phantom VII generation, BMW had prepared an entirely new production facility at Goodwood, with the whole Rolls-Royce production moving from the former location at Crewe.

2009: A new brand is born during the financial crisis

In September 2008, the world was shaken by the financial crisis that originated in the US mortgage loan industry. With world economies deeply affected, the demand for new automobiles quickly plummeted.

As the automotive industry was facing a massive downturn, BMW went against the current yet again. With the aim of completely redefining the individual mobility concept, the Project i of 2007 came to fruition in 2009 as the new BMW i sub-brand.

The Vision EfficientDynamics showcar of 2009 paved the way to the introduction of the new i8 model in 2014, while the new i3 that came in 2013 proved that electric powertrains are an attractive alternative for crowded cities.