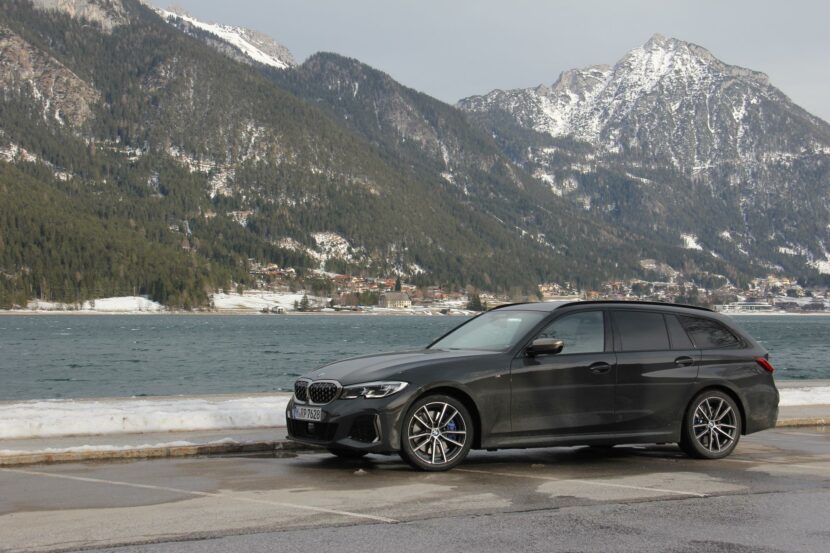 The BMW 3 Series range has already out on the market for quite some time. Yet, there is one model which we were anticipating for a long time. While we have been able to test drive the new 3er generation G20 / G21 to its fullest, there was one model which we didn’t get our hands on. Until now.

It’s the all-new 2020 BMW M340i xDrive Touring, the first-ever M Performance model of the 3 Series Touring. The car shares its engine and chassis components with the M340i Sedan and is the most powerful model of the 3 Series Touring range. Several M specific options, such as the adaptive M sport suspension, the M sport differential and the M sport brakes come standard and want to justify the M badge on the back of the car. In addition to the M340i, we will also see a diesel-powered M340d Sedan and Touring arriving shortly. 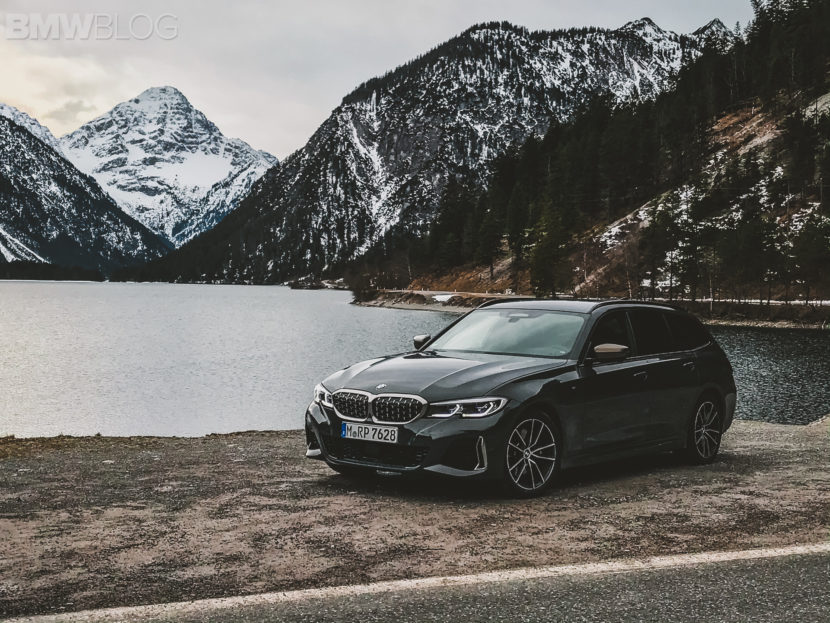 Our test car arrived with 18-inch winter tires and featured the exterior color Darvit Grey. The color is one of the available individual paints for the new 3 Series. Just like other BMW Individual finishes, the color is able to change its tone under different light angles. If you are able to see the color during sunset, it looks more like frozen grey paintwork.

The overall design of the M340i Touring is quite appealing and a head turner on the road. The long-roof line looks great from every angle. In combination with the design elements of the M-Sport package and the model specific design features, it showcases performance and speed even when standing still. Model specific elements include the mesh-design for the kidney grille and the trapezoidal exhaust pipes at the rear. 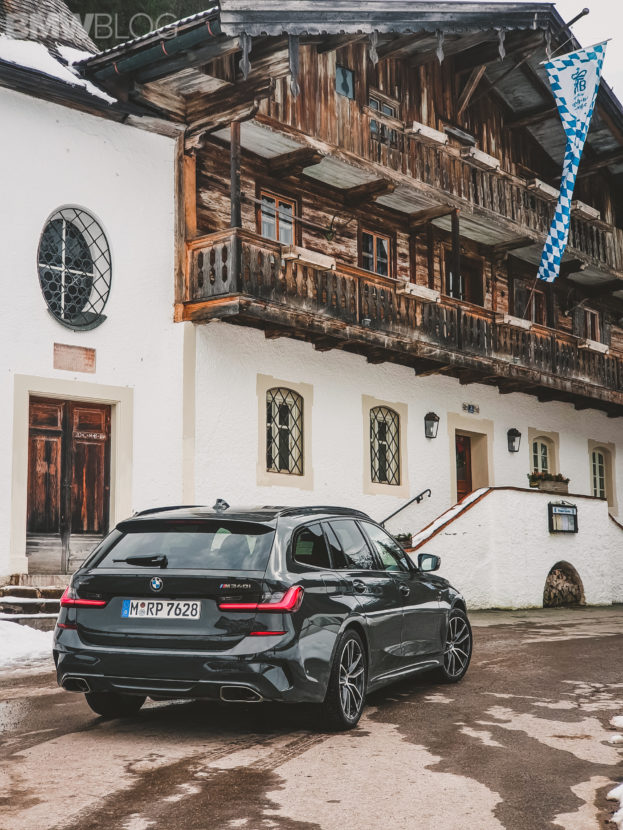 The BMW M340i Touring is powered by the award-winning B58 engine. The turbocharged inline six-cylinder engine produces a power output of 374 HP and 500 NM (369 lb-ft) of torque. “Thanks” to the mandatory Otto particulate filter, the European version of the B58 engine boosts 8 HP less compared to the North American version of the M340i. However, that’s not really noticeable from behind the wheel.

Far more important is the disappointing sound of the car. It simply doesn’t fit to the car. Even the standard M Sport exhaust system isn’t able to generate an emotional rich and appealing sound, not  even when the car is in Sport Mode. A typical deep and growly sound of a sports car was unfortunately missing. Although that’s mainly not BMW’s fault, the emotional experience is not as satisfactory as the U.S.-based M340i sedan. 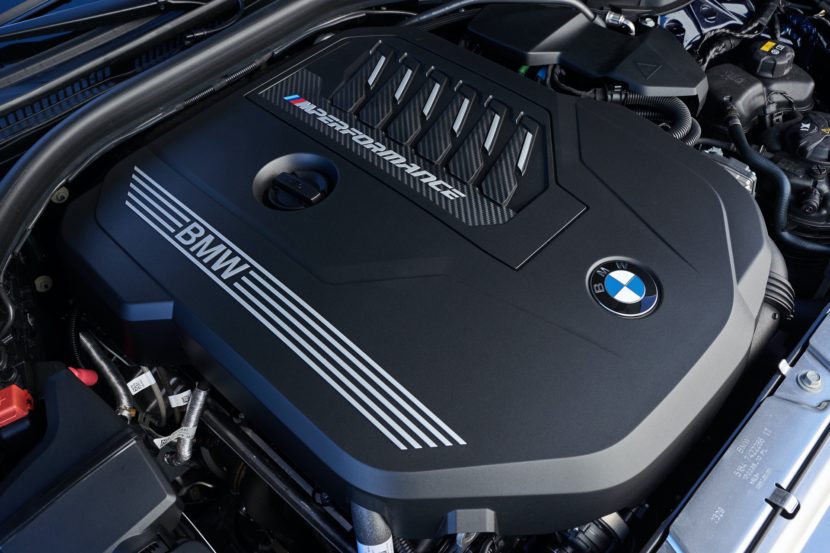 What’s definitely not missing is the gorgeous and consistent power delivery of the B58 engine.  The sprint from 0 – 62 mph (0 – 100 km/h) is done in 4.5 seconds. To put this into perspective: The BMW M3 F80 needs about 4.3 seconds while the much more sharper version, the BMW M3 CS, needs 3.9 seconds. Thanks to these numbers, the M340i xDrive is currently at the top of the 3 Series model range.

Next to the great engine, also other technology components, such as the eight-speed automatic transmission from ZF and the intelligent xDrive system are playing their part in the great acceleration and driving experience. In addition, the M340i xDrive Touring comes also with an M Sport differential as standard which ensures more agility and stability (more on that shortly).

Last but not least, the first M Performance version of the 3 Series Touring offers an optional adaptive M suspension with electronically controlled dampers in combination with a variable sport steering. Both options aim to enhance agility and sportiness in order to underline the sporty characteristics of the M340i. 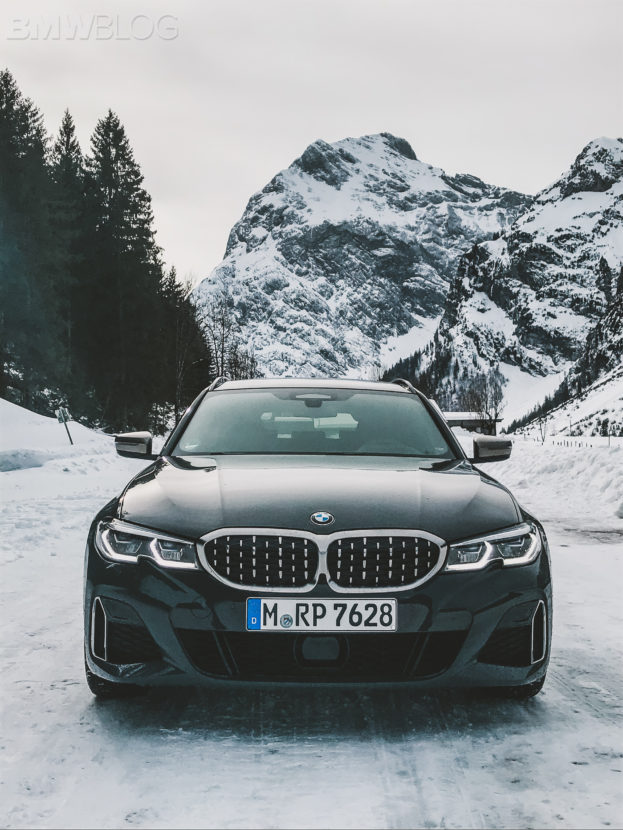 A lot of thoughts passed thru my mind when I picked up the M340i at BMW’s press center in Garching. How would the M340i xDrive Touring handle on the road? Will the power output really be that massive? And can it be a true alternative for buyers who want to enjoy the performance of an M car and the day to day practicality of a Touring?

Behind the wheel the interior looks and feels just like any other model of the new 3 Series range. And that’s not a bad thing at all. The driver-oriented cockpit and the sport seats are integrating the driver perfectly. They also make him feel part of the car. 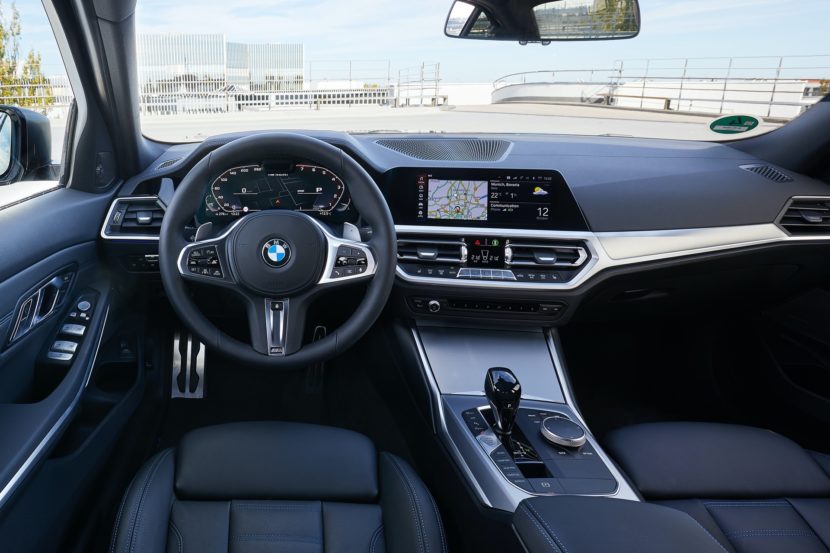 A few seconds behind the wheel and the M340i is already giving me the desire to drive and experience the car to its fullest. That’s mainly because of turbocharged B58 engine, which is, without a doubt, a masterpiece in engine development. It provides a power output of 500 NM (369 lb-ft) within a range of 1,850 to 5,000 rpm. Furthermore, it harmonizes perfectly with the eight-speed automatic from ZF. Power is provided smoothly and consistent to all four wheels, although you could feel the rear-wheel biased character of the xDrive system. The engine makes overtaking an easy task. At the same time, the power is instantly available and pushes the Touring towards its maximum speed of 250 km/h (155 mph). 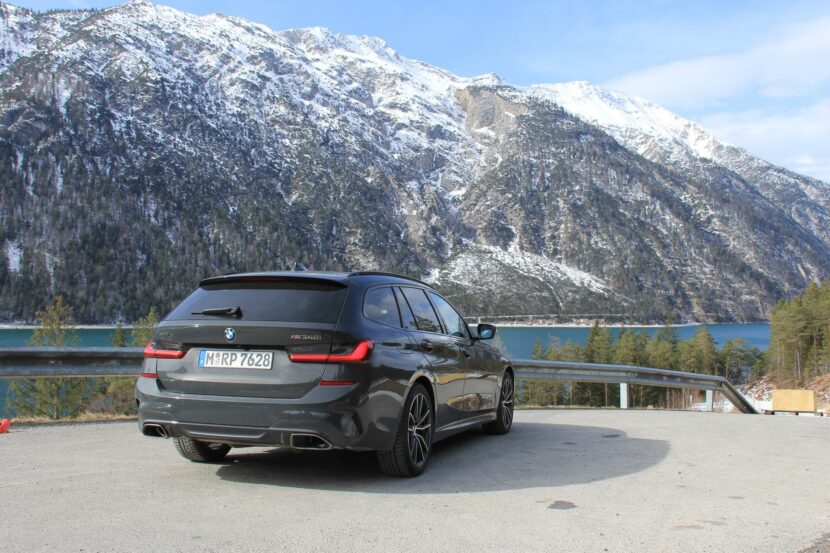 During my trip to the Bavarian and Austrian Alps, I had also the chance to test and enjoy the adaptive M sport suspension in combination with the M sport differential. Especially when driving mountain passes with endless curves, the combination of an adaptive suspension and a sport differential truly shines. An electric motor creates a locking effect between the inside and the outside rear wheel when cornering and enables a much more intense and dynamic way of driving. And, thanks to the adaptive M suspension and the xDrive, the M340i sticks to the road like you would expect it.

Also the variable sport steering provides a direct and sharp feedback. It comes standard with the adaptive M suspension package and enables the driver to precisely maneuver the car towards the desired direction. Overall, it feels completely different compared to the old F30-generation which lacked such a precise and responsive character. 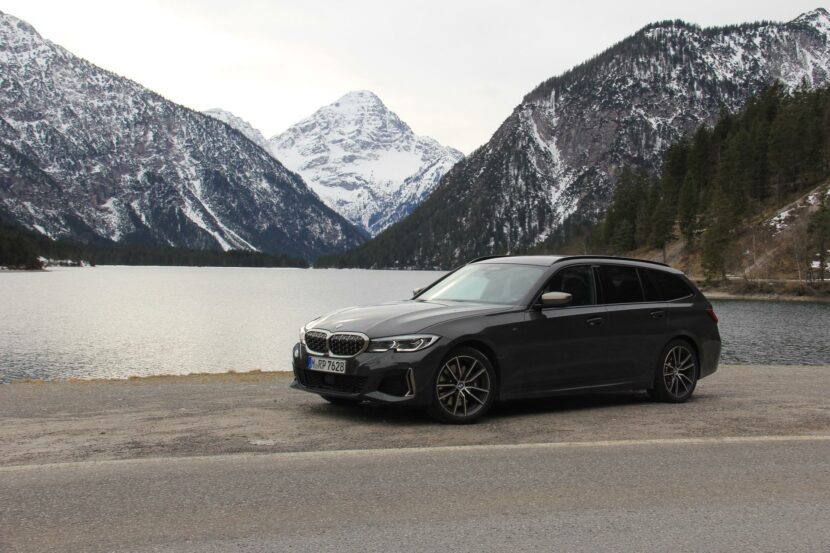 The 2020 BMW M340i xDrive Touring proved to be an amazing M Performance car. Performance and practicality is the essence of the M340i xDrive Touring. It handles and sticks great on the road, thanks to its well-rounded package of xDrive, the adaptive M suspension and the M sport differential. The powerful B58 engine is beyond all doubt and provides the right amount of power in the exact moment when you need or want it.

However, the M340i xDrive Touring isn’t a full-blown M car. But that’s also not its intention. If you expect it to be a M3 Touring, you might be disappointed. Although it comes with a lot of standard M sport features, it’s not the purist driving machine what you associate with an M car. 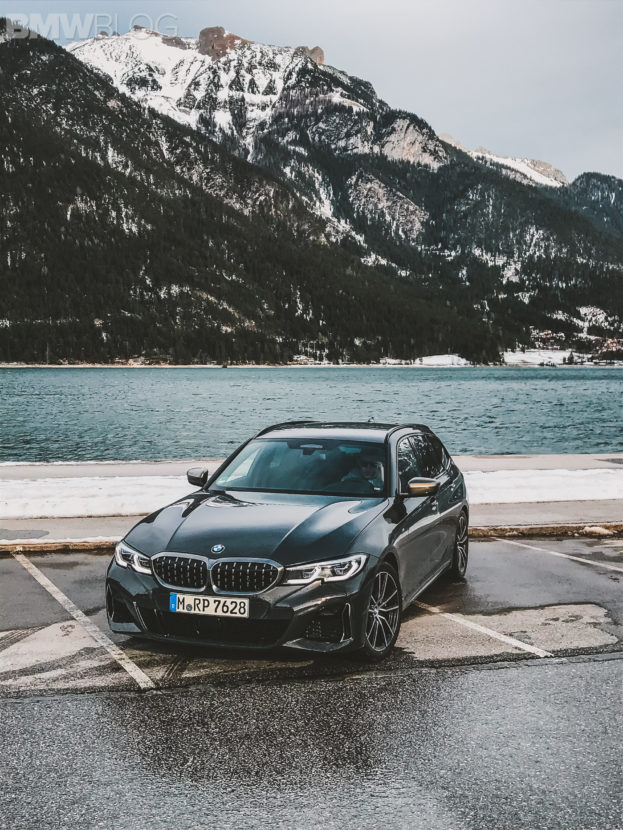 Therefore, in conclusion, without a doubt, I will take the Touring. To be precise, the M340i xDrive Touring. Based on my experience, I couldn’t imagine a better daily driver. It’s simply a well-rounded automobile which offers the best of all worlds. It can be sporty with a thrilling performance when you want it to be. At the same time it can also be a comfortable sports tourer by the press of a button.

In addition, you have also all the latest technology on board (“Hey BMW”). And, not to forget: the Touring provides enough space for you and your stuff.

My only negative points go towards the poor exhaust sound and the market availability of the Touring model. The sound doesn’t fit at all to the character of the car and the M340i xDrive Touring isn’t sold in North America. The latter one might be the real disappointment for our readers. Although there are obvious reasons for it (sales numbers of a 3er Touring in the US would never justify the high costs to bring it there), it’s still a pity.

The 2020 BMW M340i xDrive Touring proved to be an amazing M Performance car. Performance and practicality is the essence of the M340i xDrive Touring. It handles and sticks great on the road, thanks to its well-rounded package of xDrive, the adaptive M suspension and the M sport differential. The powerful B58 engine is beyond all doubt and provides the right amount of power in the exact moment when you need or want it.