VIDEO: Check the 4 Series Coupe in camouflage in motion

Home » VIDEO: Check the 4 Series Coupe in camouflage in motion

Yesterday, we saw some spy photos of the new BMW 4 Series Coupe doing some laps of the Nurburgring. Today, we get to see some video of the very same car, doing the very same thing. It’s interesting to see both photos and video of the car because seeing a car in motion gives a better perspective of its styling.

In this new spy video, the upcoming 4 Series Coupe looks refreshingly good, if I’m being honest. After seeing the frumy-assed BMW 2 Series Gran Coupe, it’s nice to see a proper rear-drive, three-box coupe with a long hood and short deck. It’s a handsome looking thing, this new 4er and I think we’re all going to get used to its massive grille when it finally debuts.

After seeing the BMW Concept 4, the car which the new 4er takes its design from, many fans were shocked by its simply enormous grille. Because the production-ready 4 Series is said to look very similar to its concept car, it’s also likely to have a large grille. It might be quite off-putting at first but we’ll get used to it, as we get used to most designs. Plus, after seeing the new 2 Series Gran Coupe, I think we’ll take the new 4er, absurd grilles and all. 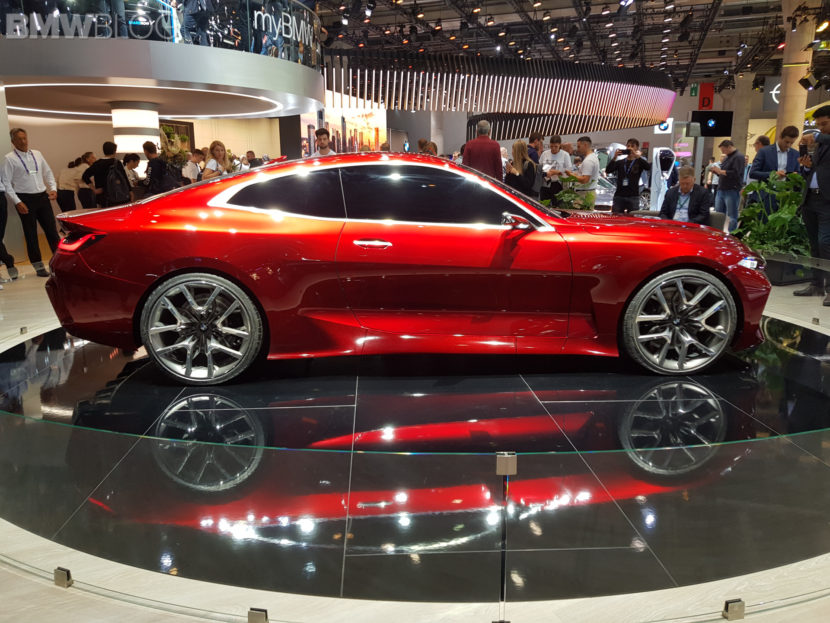 In some of the clips from the video, we see what seems to be a BMW M440i pulling away from a gas station and lapping the ‘Ring and it sounds quite good. The B58 engine in that car will likely make the same 382 hp and 369 lb-ft of torque as it does in the M340i sedan. It’s a masterpiece in the 3er, so we’re expecting big things from the M440i. In fact, it could be one of the coolest Bimmers on sale when it finally debuts; acting as a sort of budget BMW M850i.

It’s also refreshing to see a BMW with proper turn-in. A recent spy video of the new M235i Gran Coupe popped up and showed it understeer like crazy. Seeing a rear-bias (could be xDrive) 4 Series turning in properly and cornering with balance is a nice reminder of what BMW is supposed to be about. Let’s hope when this new 4er debuts, it’s as good as we expect it to be.

6 responses to “VIDEO: Check the 4 Series Coupe in camouflage in motion”