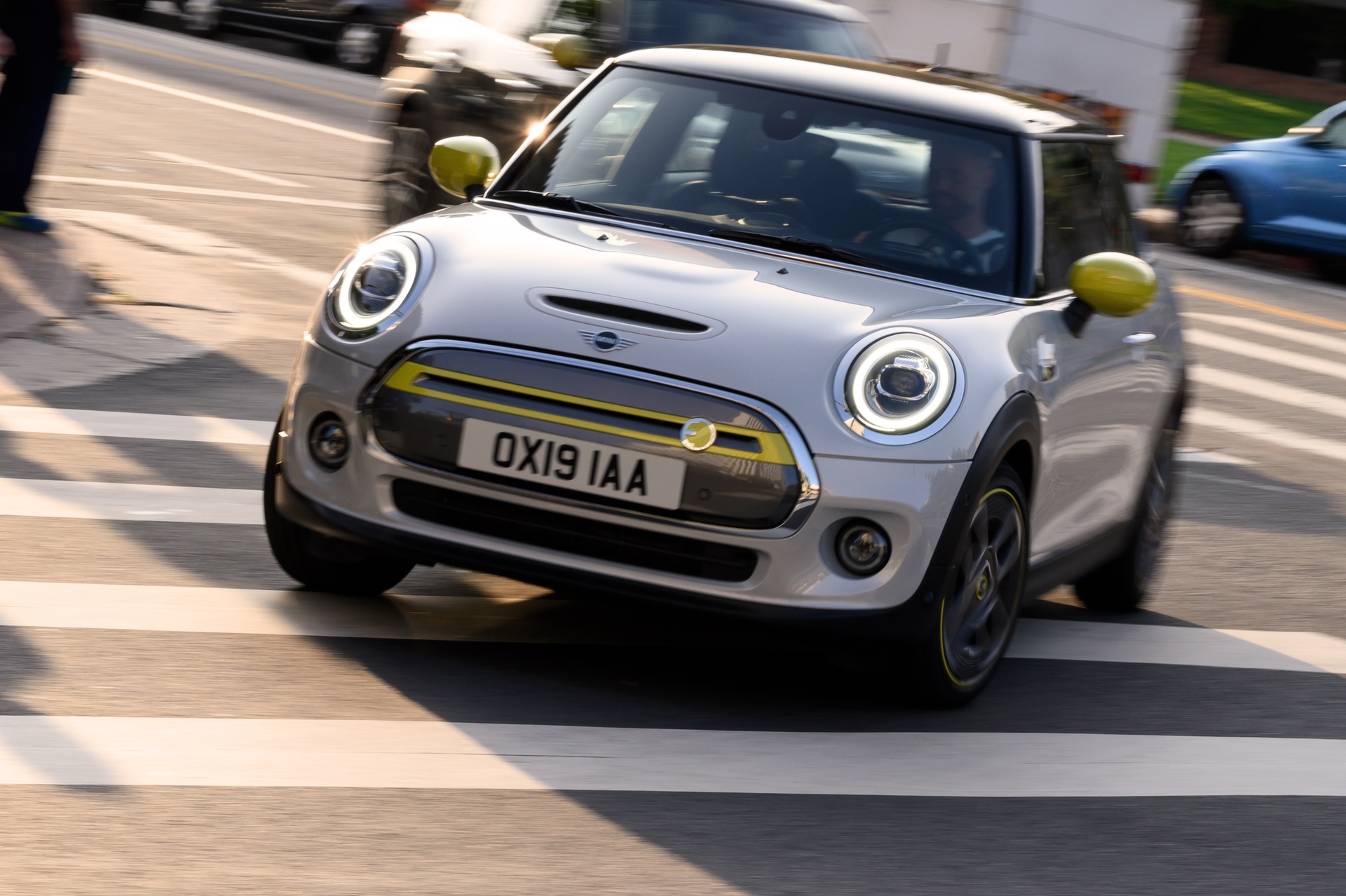 MINI gave a sneak preview of the all-new pure electric MINI Cooper SE at the 2019 NYC Formula E race. The original all-electric MINI E was much beloved when it was released in 2008 to the lucky few who could lease it. That car served as a real-world EV test bed for BMW/MINI. BMW followed the original MINI E up with the BMW ActiveE in 2012 and then, of course, with the BMW i3 in 2014. Many have been eagerly anticipating the release of MINI’s new EV and expectations are high. 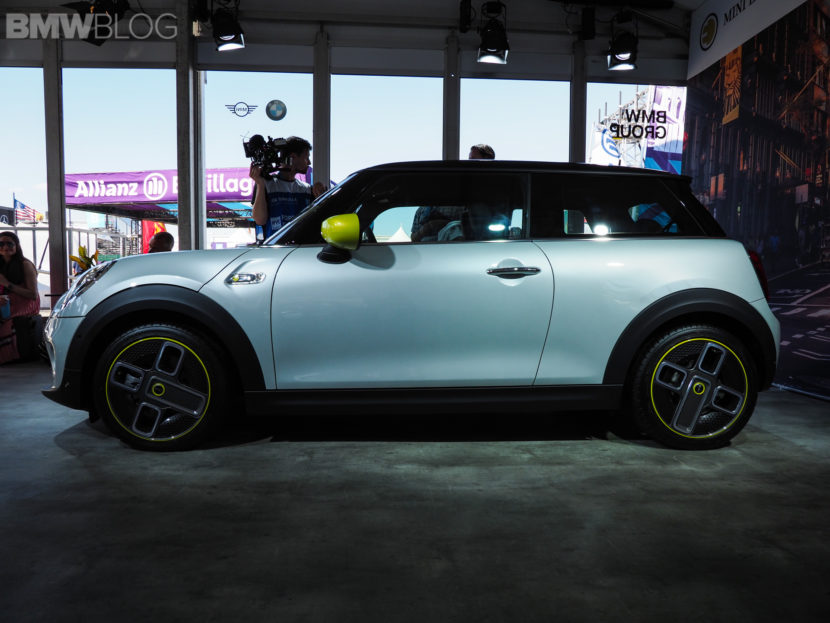 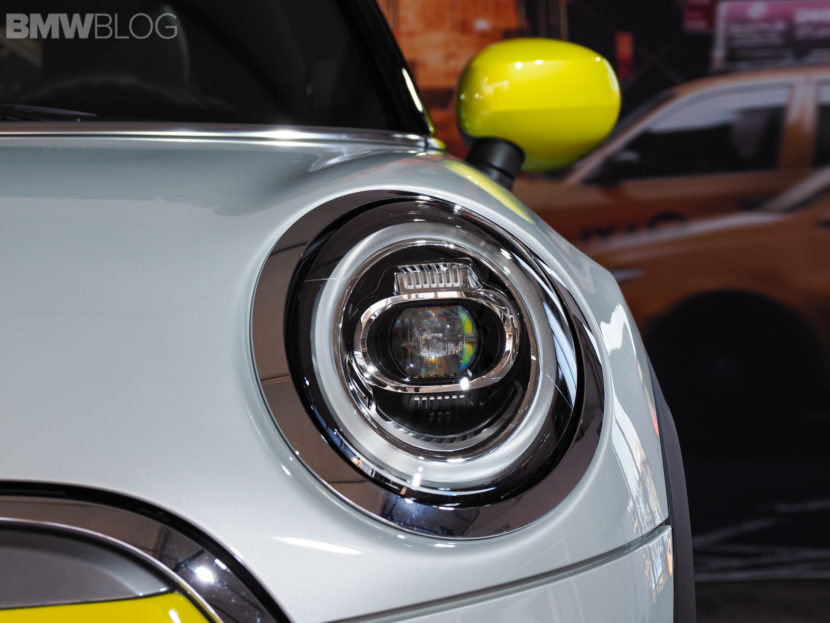 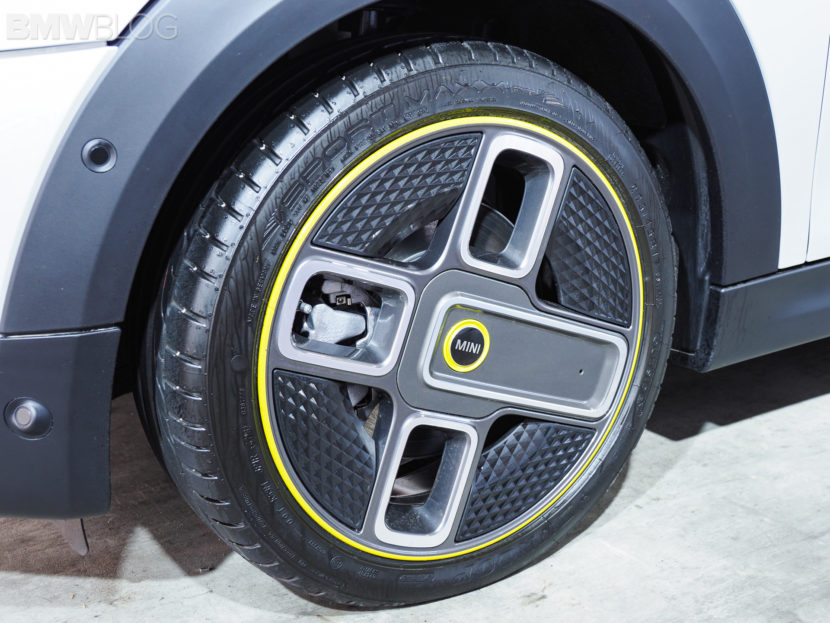 US official rated range is not yet available. MINI reps did confirm that their new EV will be using 94Ah batteries. Given a total battery capacity of 32.6 kWh size, I would expect a range in the US of 120 miles as this is about what a 94Ah i3 is rated.

Though MINI electric has a range listed from 235-270 km, I was able to confirm that only one battery will be available for the MINI Cooper S – a 32.6 kWh battery pack. The two different ranges listed in kilometers, MINI reps told me was due to differently optioned cars. For example, certain wheels and tires combos are not as efficient as others. This type of change in rating is no different than what Tesla does if you change wheels and tires. 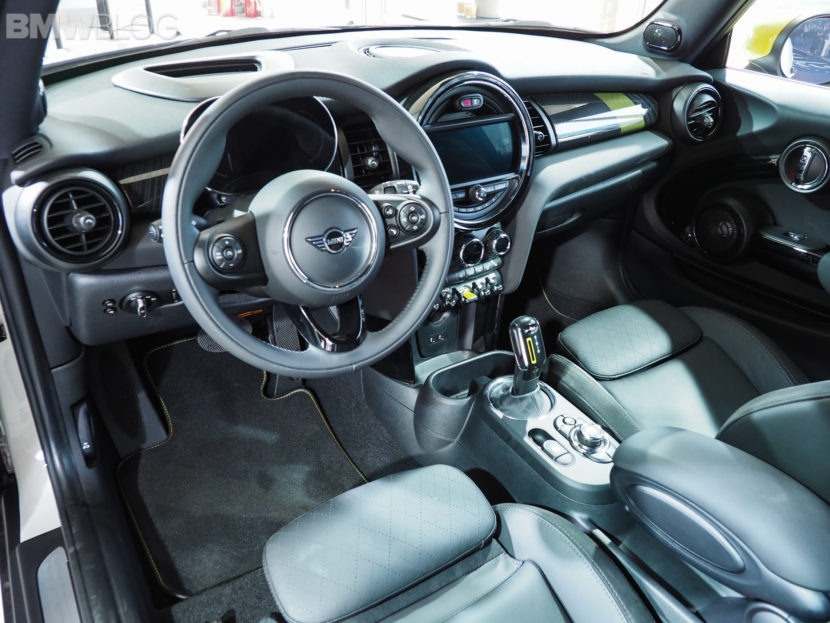 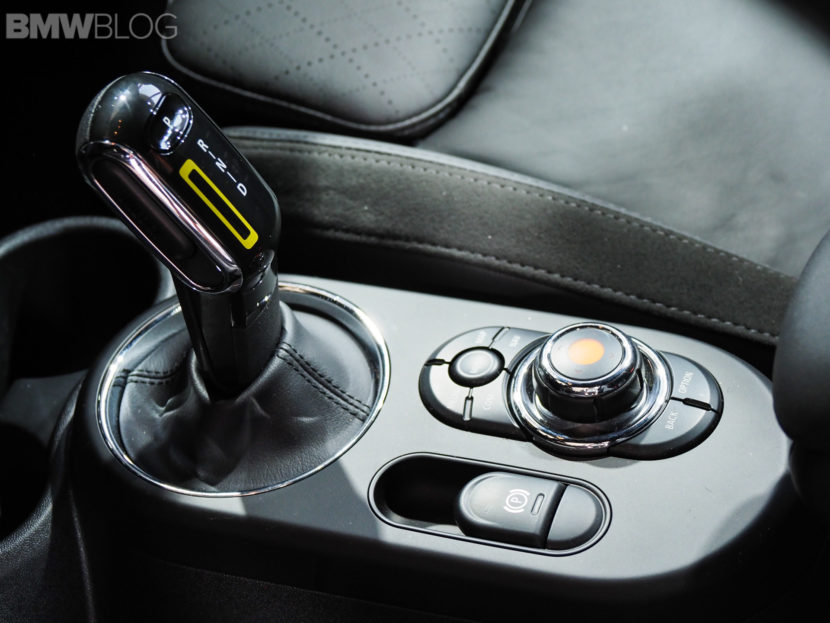 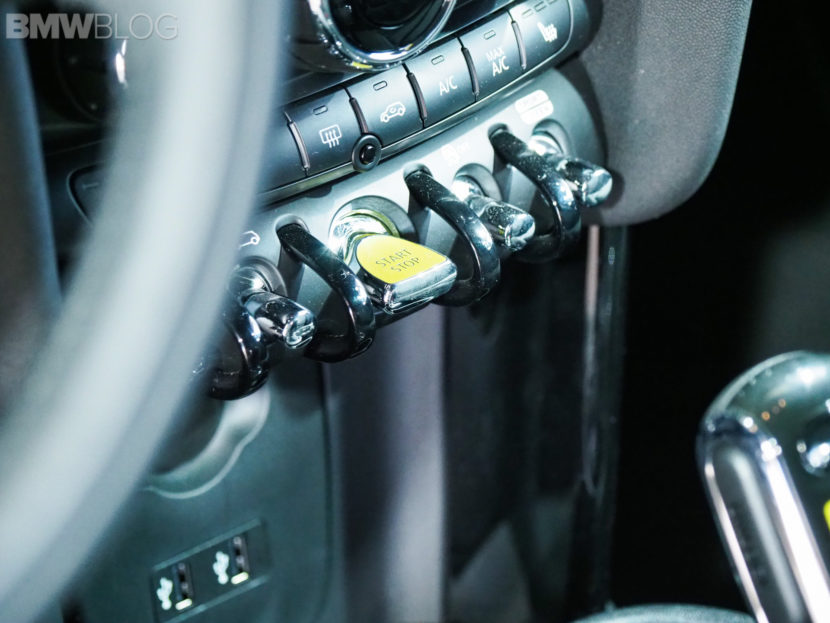 As far as charging goes, The MINI will have a J1772 plug-in charge port which can deliver up to 11 kW Level 2, as well as a CCS DC port with charging at speeds of up to 50 kW. On the DC Charger, the MINI Cooper SE is capable of going from nearly empty to 80 percent in about 30 minutes. When plugged into a 7.2 kW charger 80 percent gain from about flat occurs in 2 and a half hrs.

The MINI Cooper SE shares the iconic MINI design but is not as futuristic looking as was the 2017 MINI E Concept. MINI did confirm to me that the MINI Cooper SE is an adapted, existing MINI Cooper chassis which launched in 2014, doors, hood roof and all.

Cosmetically, The MINI Cooper SE appears much like a regular MINI Cooper 2 door hatch but is adorned with a lot of yellow accents, unique badging and a charge port instead of a gas cap. An additional 319 lbs were added when you compare to a standard MINI and it has a curb weight of 3,009 lbs. 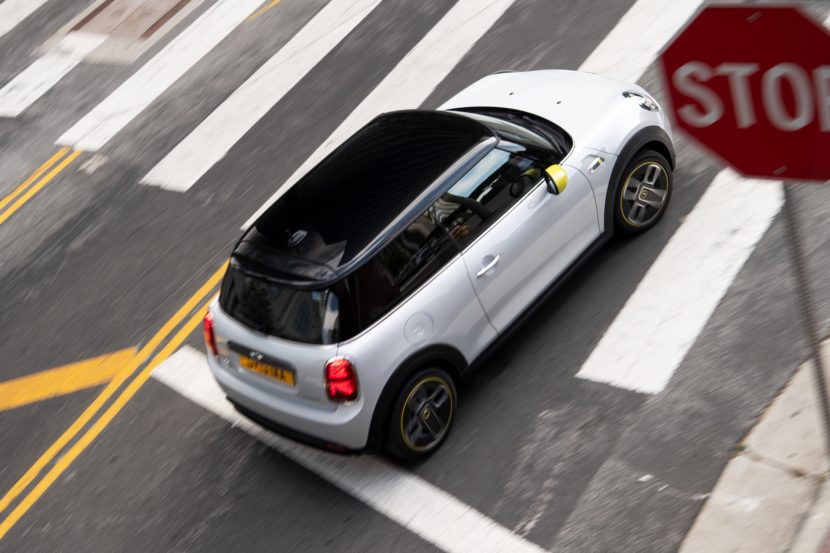 The powertrain is, however, completely different. MINI packed the transmission tunnel and storage under the seats with batteries laid out in a T-Shape. Open the front engine hood and you might think you can see the electric motor.

You can’t. All you see is a large plastic shroud. If you peak up underneath the edge of the shroud though, you can see some orange electric cables. The battery is thermally managed and heat for the cabin is provided via a standard heat pump.

The MINI Cooper SE has a 184 hp (135kW) electric motor that makes 200 lb-ft of torque and is the same motor used in the BMW i3. The MINI Cooper SE, however, will be typical MINI and front wheel drive versus an i3 which is rear-wheel drive. Being a pure EV, means the center of gravity is lower and as such compared to a typical MINI Cooper, the center of gravity drops by 30mm. The car has a 60/40 weight distribution in-line with other MINIs. 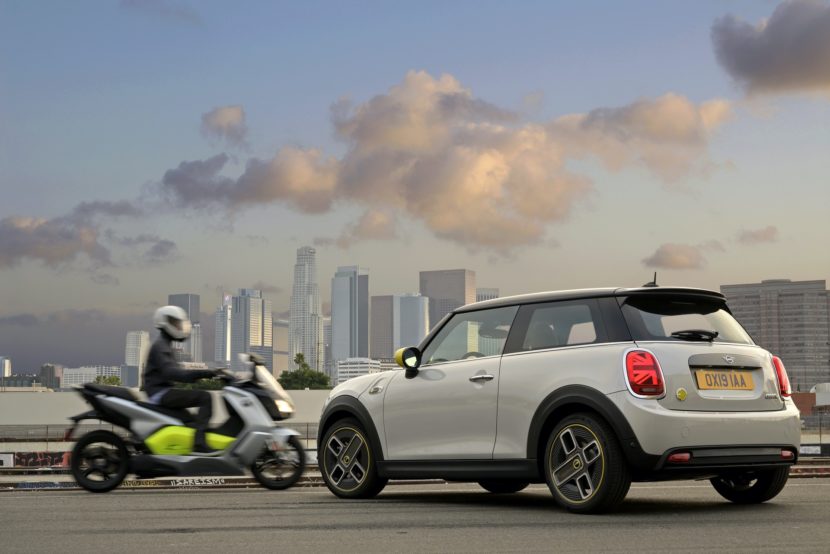 Two different braking modes are available. The most efficient is regenerative mode typical of what an experienced EV driver would expect. Meaning, if you lift off the throttle there, the drag of the powertrain slowing the car down while recharging the batteries. For people who want a more traditional coasting experience when you let off the throttle as one experiences in a petrol powered car, merely reach down the row of switches low on the center console and switch the regenerative braking off. Regen is either on or off, there is no variable setting for it.

The cabin has a 5.5” instrument display for speed and battery capacity. In the center is an 8.8” navigation and entertainment screen and a Head-Up display is optional. The large central display will also tell you what driving mode the EV is in. The MINI Cooper SE has four different driving modes you can choose: Sport, Mid, Green, and Green+. Mid is the default setting and if you switch to Green+ it is so extreme that the air conditioning gets shut off, but will increase your range. This is similar to Sport, Comfort, EcoPro, and EcoPro+ in the 2018 on i3s. 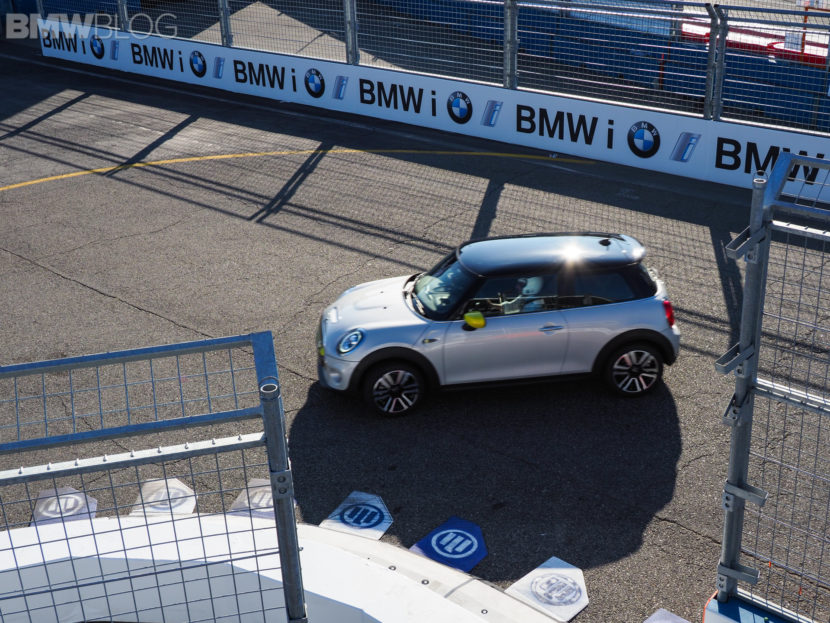 MINI gave out “Taxi” rides around NYC in the MINI Cooper SE. I got picked up in front of our hotel in Brooklyn at 10 pm for a fun jaunt across the Brooklyn Bridge and into Manhattan. Several times the MINI rep nailed the throttle allowing me to experience the MINI Cooper SE’s instantaneous acceleration.

As he was doing so, I asked him if there was any torque steer and he said there was not, even when applying the throttle in a corner. Performance is listed at 7.3 seconds 0-62 mph, but from where I sat it felt much quicker than that. Top Speed is 93 mph. 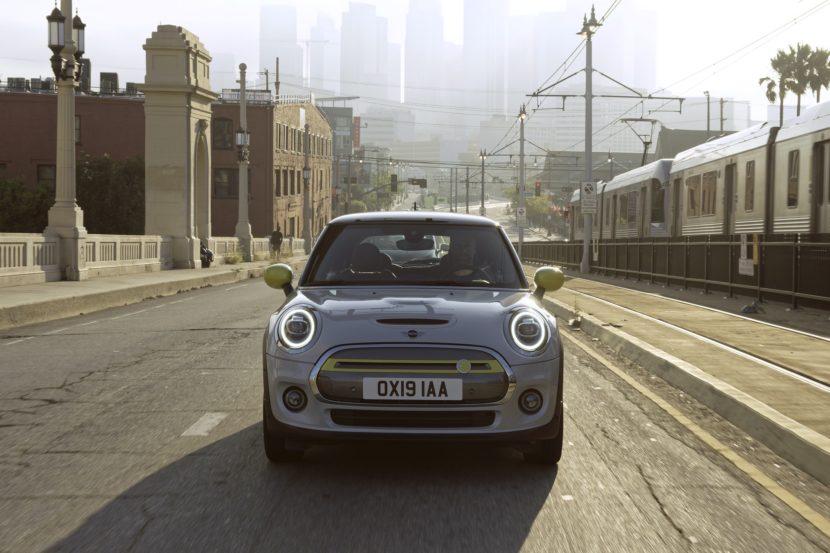 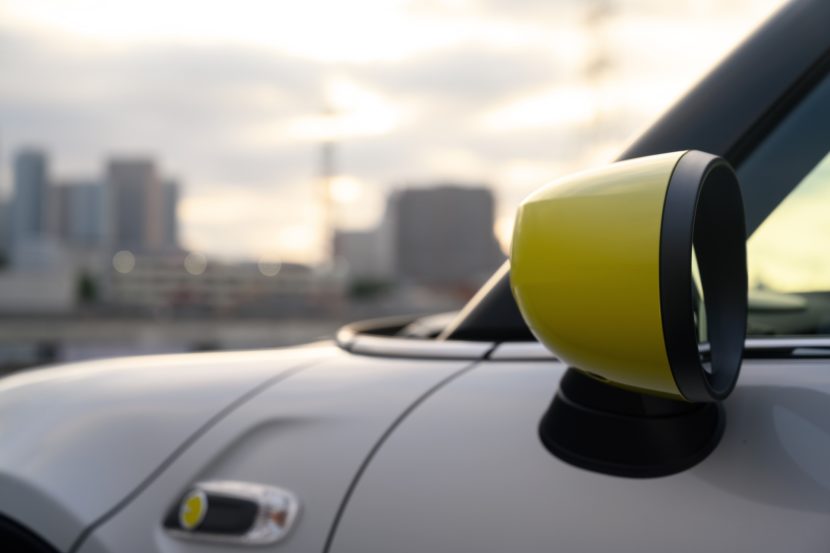 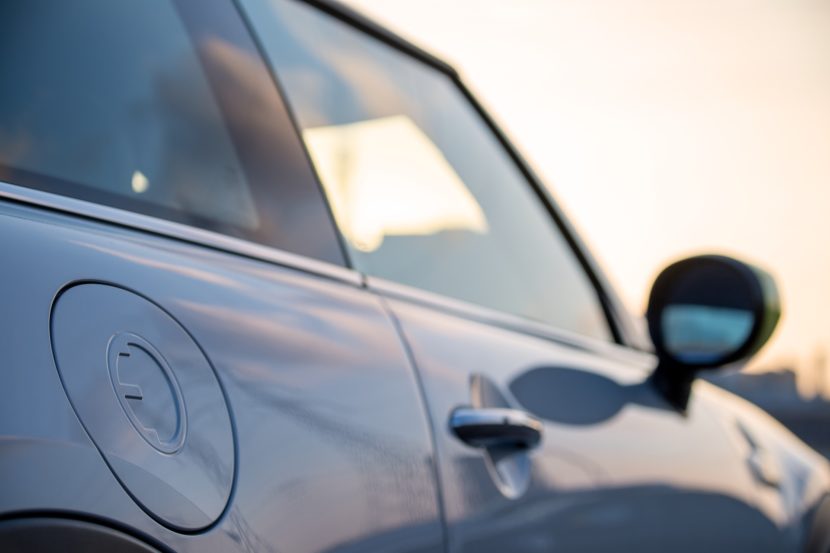 As MINI engineers were able to keep the batteries in the transmission tunnel and under the seat, the interior of the MINI Cooper SE is the same layout as a regular MINI Cooper replete with seating for four, fold-down seats and small but useable hatchback. The electric engine is even tucked neatly under the front bonnet.