When it comes to the BMW M5, everyone’s currently focused on the new model, the F90. Coming in hot with more power than before and an even more importantly, an all-wheel drive system on board, the F90 M5 is a proper land rocket and has been known to embarrass a number of cars on the drag strip. But what about the old car? What about the F10 M5 and its rear-wheel drive setup? Can it still provide decent runs on the same proving grounds?

Well, we’re here to find out and in order to do that we’re looking at a rather unfair comparison between an internal combustion engine car and an electric model. The ICE is, of course, represented by the aforementioned BMW M5. The 575 HP M car in the footage below (this is a slightly modded version according to the description) came in automatic guise, which means it has a 7-speed dual-clutch gearbox on board handling the cog swapping. On paper, the DCT gearbox is faster than the conventional 8-speed used on the new M5 but the new car makes up for it in other ways. 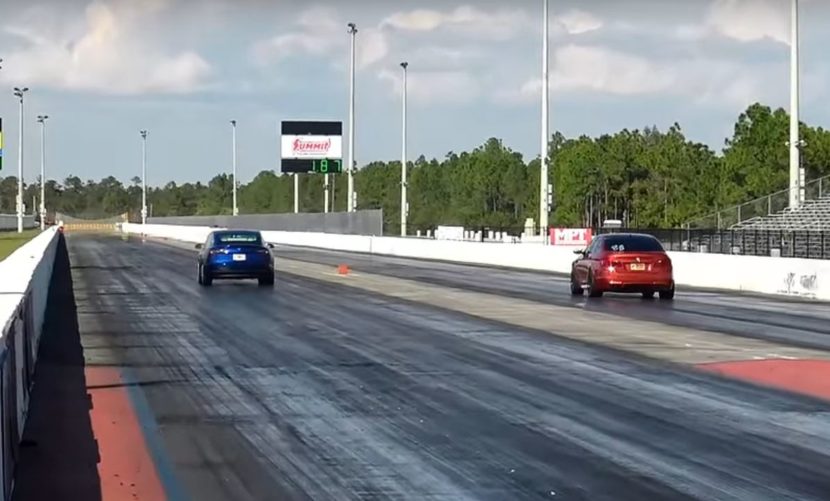 On the other side of the drag strip sits a rather unusual appearance for the decor. The Tesla Model 3 is not a dragster but people have gotten used to seeing Teslas in such an environment due to their amazing acceleration figures off the line. The Model 3 is the slowest of the range though. The electric motors make 450 HP and 471 lb-ft of torque, less than on the M5. However, the Model 3 does have all-wheel drive and is lighter than the M5 by some 300 lbs.

What’s most impressive here though is how well the M5 grips off the line. Most of the time, RWD cars have trouble putting the power down when launching, but in this case that’s not an issue. It may be all down to the surface they are driving on, as this sort of strip usually has super sticky asphalt on to make sure you don’t spin out but even so, it’s quite an impressive display. However, to learn who won, you’ll have to watch the video, no spoilers here.