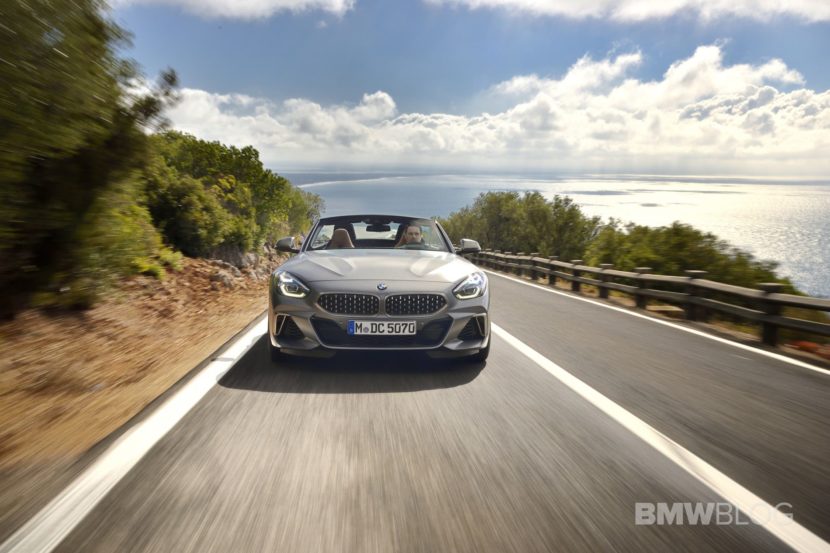 10 years ago, BMW introduced their second generation Z4 Roadster and for a while, we thought that the beautiful open-top might be the last “Z” to arrive on a market dominated by light and heavy trucks. But to our surprise, and to the surprise of a shrinking segment, BMW had some other plans.

Just a few months ago, on the beautiful Californian shores in Pebble Beach, BMW has unveiled the G29 Z4 Roadster, a car that not only builds atop the design philosophy of a BMW roadster, but it’s also the largest departure from BMW’s roadster style in ‘Z’ history. It’s also the first, and possibly only, BMW to be developed from BMW’s partnership with Toyota. So not only is its styling radically different than anything the brand has done before but it’s been co-developed with the iconic Toyota Supra. 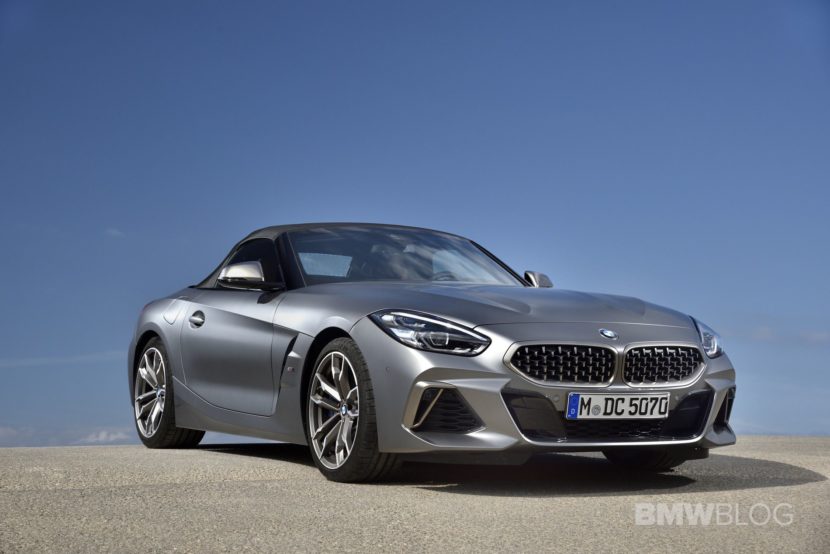 BMW has praised the car’s DNA and sporty capabilities ever since its introduction, but in order to convince us of its engineering prowess, they’ve invited me to Lisbon to sample the new Z4 Roadster on the beautiful and curvy roads near Sintra and Setubal.

But before I jump into the driving experience, let’s touch a bit on some of the design and engineering features. While the new Z4 has been quite criticized when it came out, recent feedback I’ve seen points out to a change of heart for many BMW fans and customers. In person, the short, low and wide stance of the new Z4 is quite refreshing in a world of cars with a high-center of gravity, while colors like Frozen Grey bring out the details in the bodywork. A large fender vent can be seen behind the front wheels, where character lines begin and sweep across the doors. 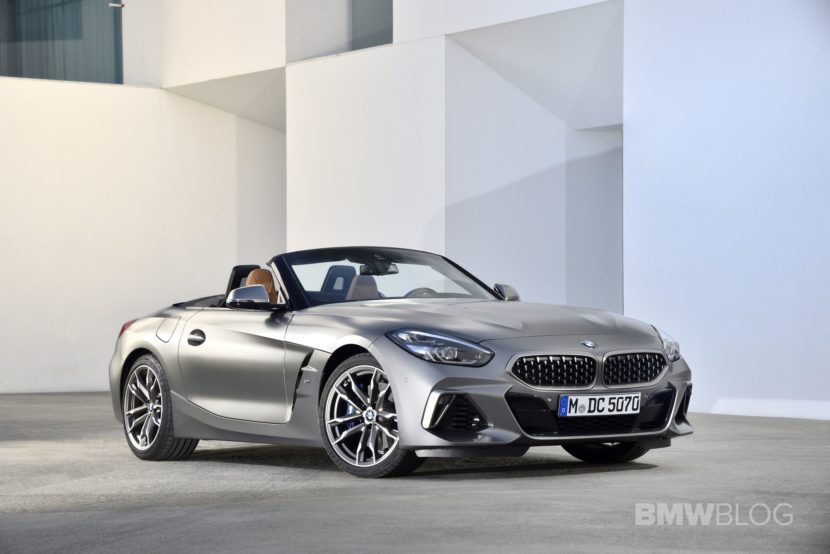 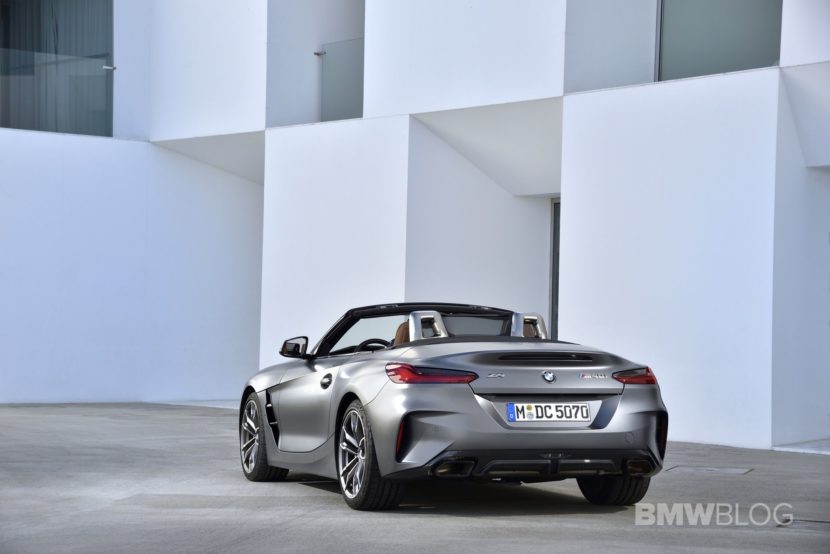 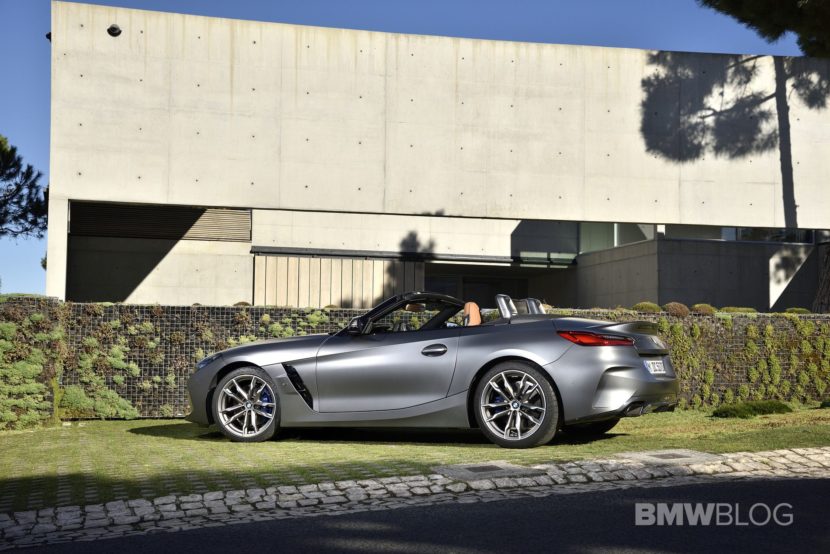 Due to the safety regulations, the nose of the concept car was slightly revised. The 2019 Z4 production car gets a flat front end instead of the shark nose that we all came to love in older BMWs.

There are also a couple of novelties for the G29 Z4. Rather than vertical slats, the large kidney grilles are filled with little “Y”-shaped designs. That styling cue is pulled directly from the Concept and can be seen on the upcoming G20 M304i as well. Another design element pulled from the popular concept car is the use of vertically-aligned headlights, which is another BMW-first. Typically, BMW headlights feature twin, horizontally-opposed halos. For the Z4, though, they’re vertically-opposed. 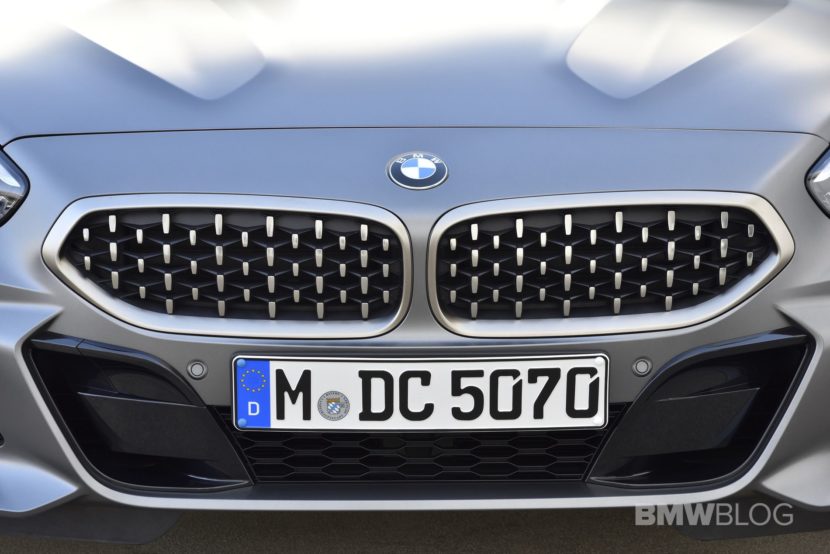 And while the exterior was controversial at first, the cabin of the new Z4 is the one that got praised from the beginning. The new Z4 features BMW’s new interior design language, which is shared with cars like the new 8 Series, X5 and 3 Series. So it gets BMW’s latest iDrive, a new rotary iDrive controller that features a knurled aluminum bezel, a brand-new Head-Up Display and BMW’s new Live Cockpit digital instrument panel. The craftsmanship and quality of leather and trim is higher than ever before in a “Z” model, while the cabin retains the typical sporty and driver-oriented layout. 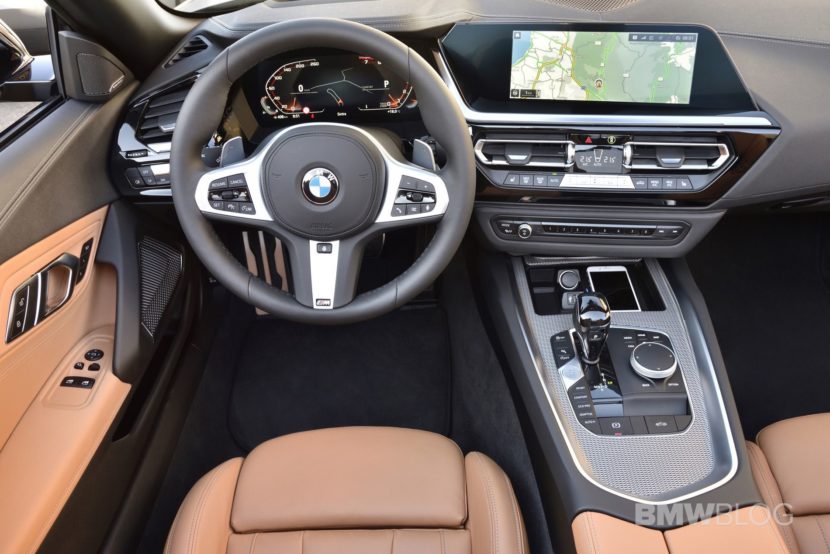 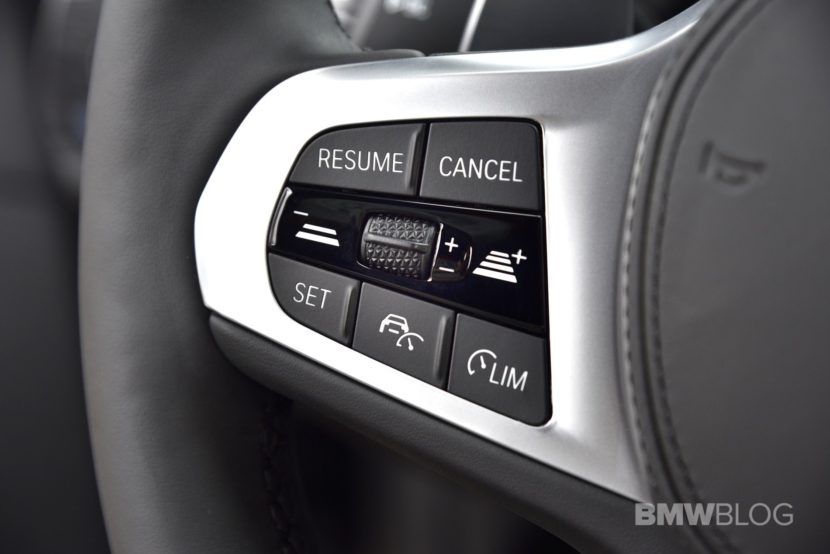 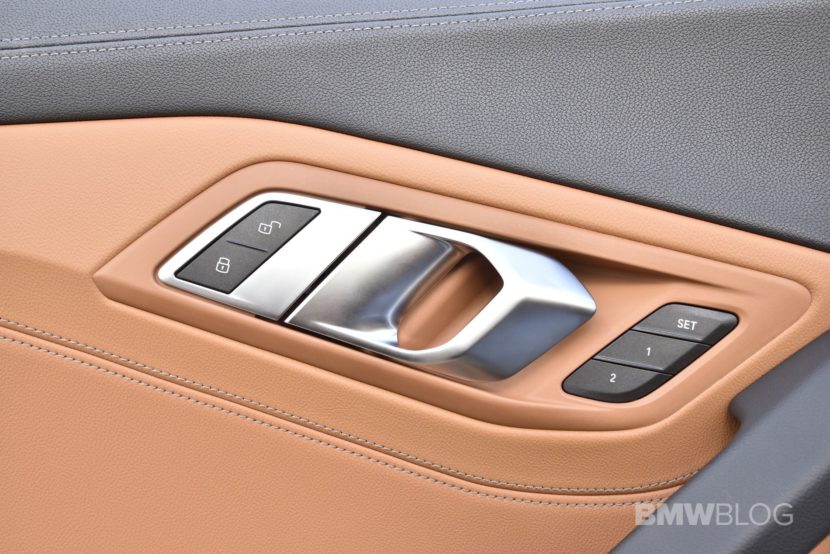 Space wise, the cabin offered enough space to myself, despite my big frame at 6″3 and around 200 lbs.

The hardtop of the outgoing E89 Z4 was also replaced with a soft canvas. The roof of the new Z4 will be open or closed in just 10 seconds, making it the fastest on a BMW model today, beating the i8 Roadster’s 15-second dash. You will also be able to operate it at speeds up to 50 km/h (30 mph). The soft top comes in either Black (standard) or Anthracite with silver effect as an option. 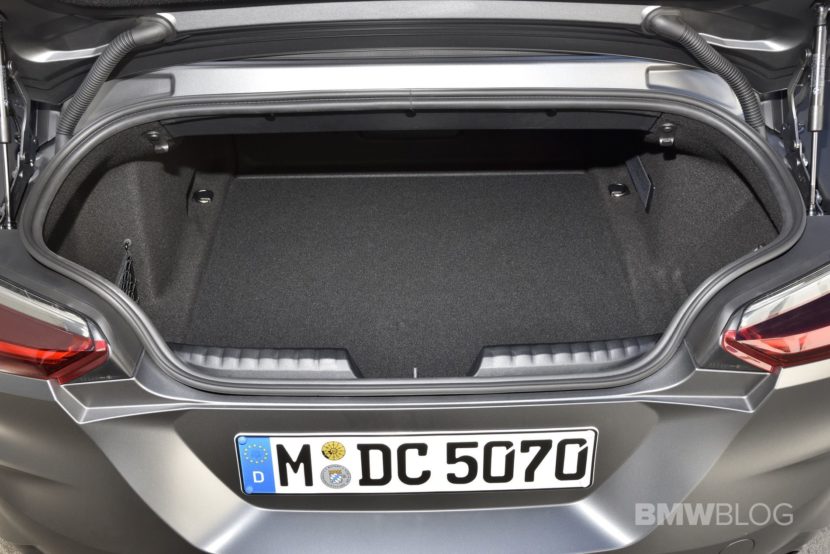 Last but not least, I should also mention that the boot will offer 281 liters of space no matter whether the top is raised or lowered, which is 50 percent more than what you’d get on the E89 Z4. 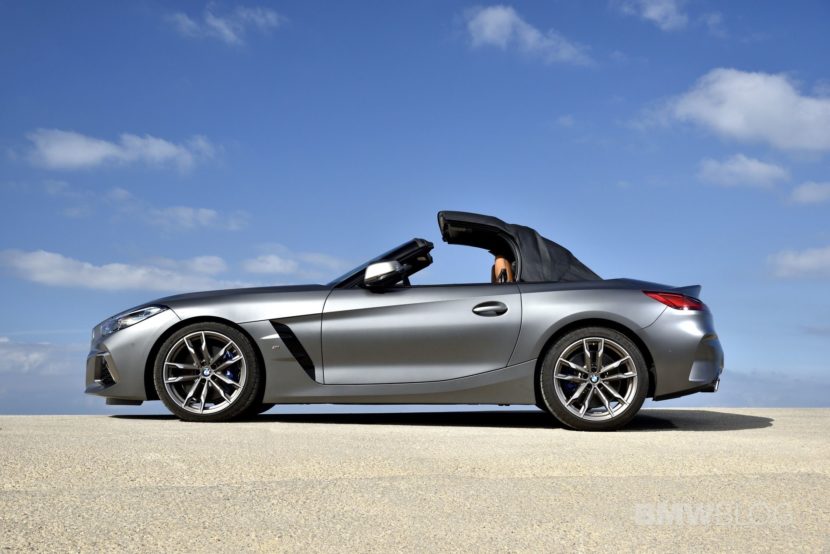 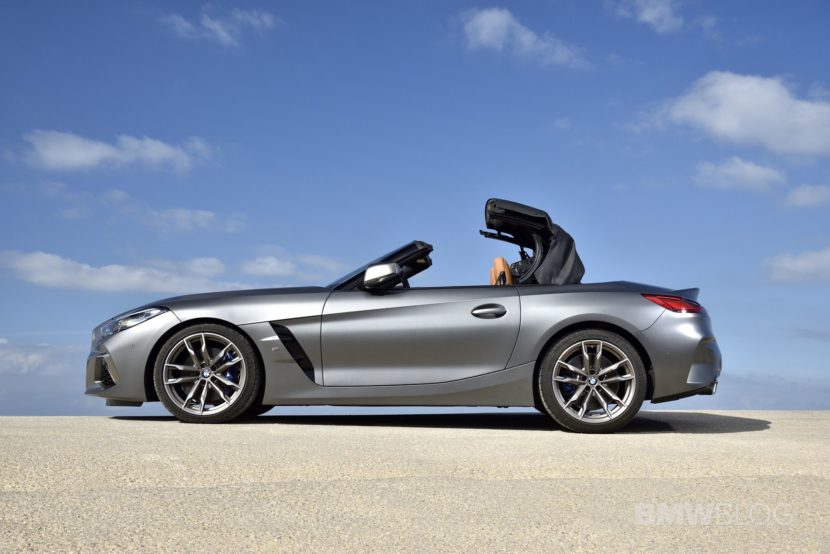 The BMW Z4 M40i benefits from the Adaptive M Sport suspension, M Sport brakes and M Sport differential, which comes standard on the Z4 M40i model. Offering Comfort, Sport and Sport+ models, the adaptive setup changes damper settings and will lower the ride height in the sport modes. The electronically controlled rear differential uses an electric motor to generate a locking effect that equalizes torque distribution and helps to provide sharper handling. This active differential also helps to control under and oversteer conditions. 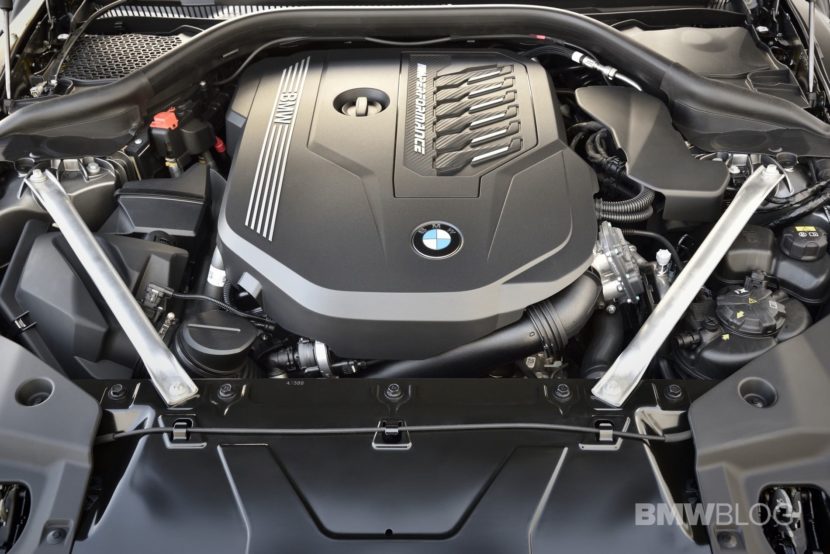 Under the hood, the Z4 M40i comes with the well-known 3.0 six-cylinder engine, but this time, with two power levels, depending on the market. The engine in question is BMW’s brilliant B58, which in the Z4 M40i makes 382 hp and 369 lb-ft of torque (European models produce 335 horsepower). The difference in power comes from the lack of the the EU’s gasoline particulate filter in US models. The model made available to journalists in Lisbon featured the ECU mapping of the European model. Paired with the punchy B58 engine is a ZF-sourced eight-speed automatic that routes power to only the rear wheels. 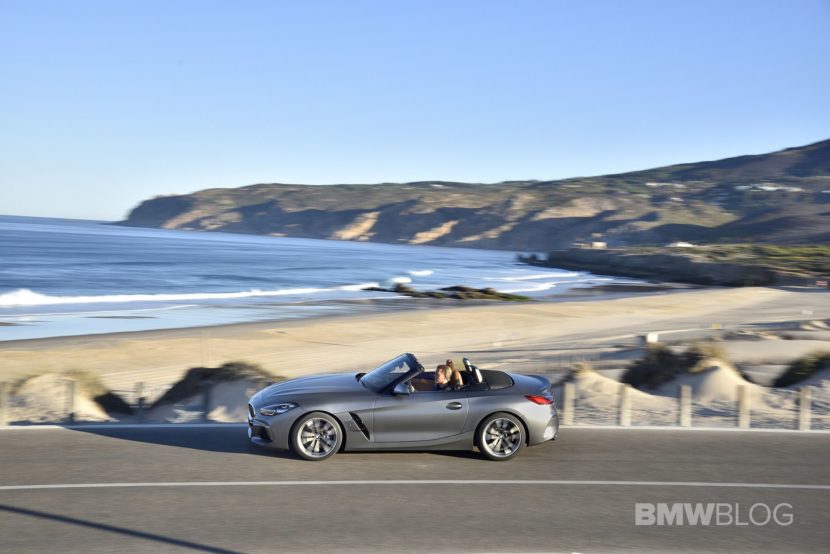 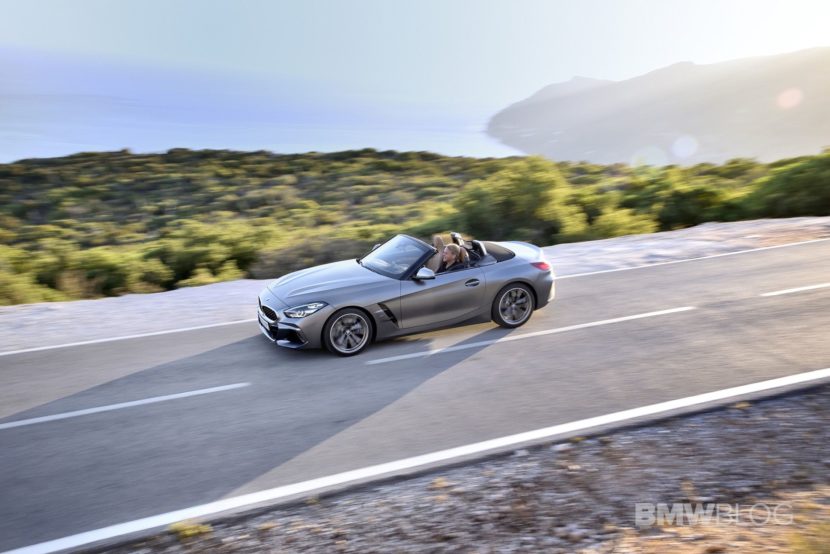 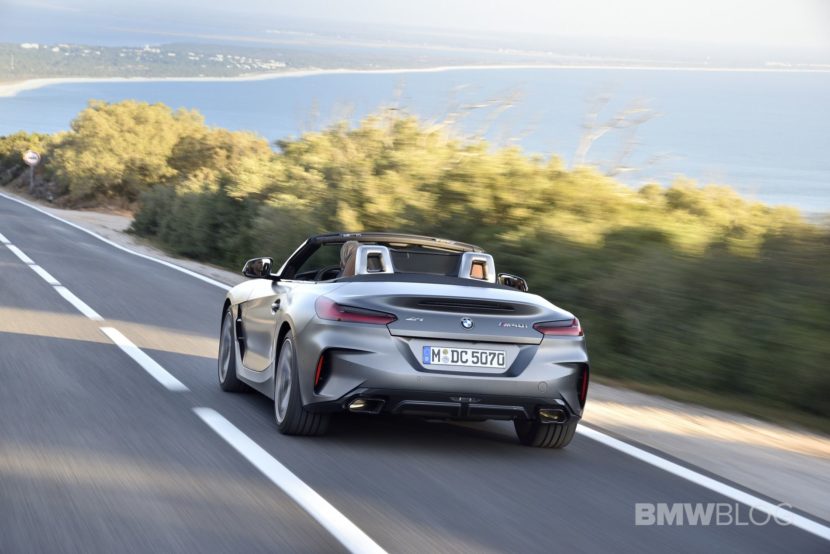 Driving with an open top is always preferable, especially when you’re in the great Portuguese weather and surrounded by scenic views. I started off in Comfort mode just to see how the new Z4 feels compared to other BMWs that offer the Adaptive Suspension and surprisingly, the G29 Roadster was still very responsive to steering input and provided more feedback from the road than I expected. The engine sound is a bit more tame than you’d hear in the Sport modes, which kinda works for me since I don’t mind enjoying my surroundings without that loud noise in the back of my head.

Even in Comfort mode, the Z4 is quite balanced, without feeling too rough on you, maintaining its composures on the tight corners surrounding Sintra. The chassis is tight even without the suspension adjustment of the Sport model, and the car feels planted on the road with plenty of agility in your hands. 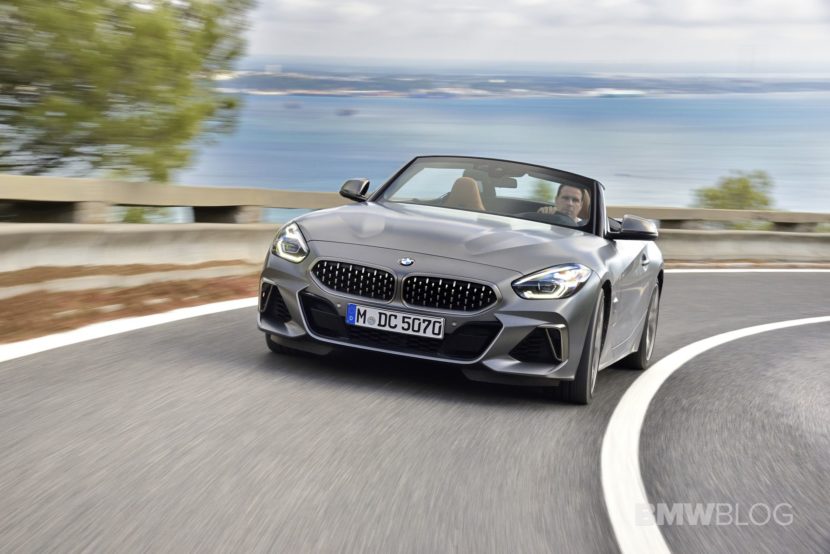 Now it’s time for some spirited driving, so Sport+ mode in on, the Adaptive Suspension stiffens up, the exhaust note changes completely, while shifting is even more precise and quicker. If you let go of the throttle, the exhaust valves open up giving a great blurb that should satisfy all the BMW purists. The acceleration mapping is also more aggressive, so as soon as you’re on the gas pedal, the Z4 Roadster just pulls hard from under you. 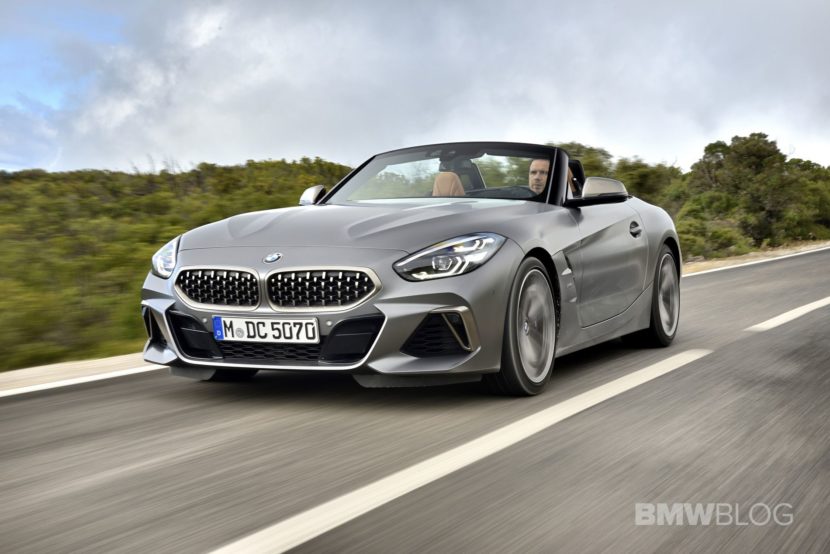 Compared to the other BMWs I’ve driven lately, I found the Z4 Roadster to be quite refreshing, mostly due to its low weight which reminds me in a way of my 1M Coupe and its happy tail and spirited drive. There is also a huge amount of torque on tap across the rev range and I can tell that the ZF eight-speed is in its latest generation with a more linear power delivery. The turbocharger pulls hard from very low in the rev range, with the torque peak arriving at only 1,500rpm that holds on until 6,500rpm.

If I stay on the throttle, in any gear, the new Z4 just simply wants to reward you by pulling hard, letting loose a bit of its rear grip until the electronic differential kicks in to keep you safe and on the road. I’ve briefly turned off the nanny-controls (not always advisable on a slightly wet tarmac) and the car was just too much fun – tail happy, powerful and easy to throw in any tight corner. The staggered Michelin Pilot Super Sport tires – P255/35R19 up front and P275/35R19 out back – offer plenty of grip, just as you’d expect from them. 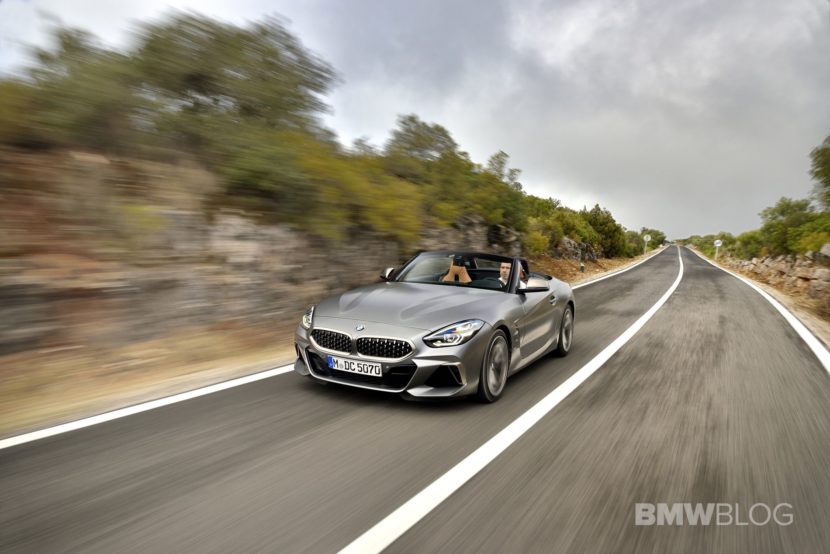 In sharper corners, the steering of the new Z4 provides a great amount of feedback, letting you feel the direction of where the car is heading towards, as well as the imperfect asphalt.

A few hours later I’ve started to fully appreciate the active rear differential which is really there to help you be a better driver. In Comfort, it adds stability and traction without neutering the power to the rear wheels, while in Sport or Sport Plus it enhances the sportiness of the roadster by providing more grip to the front while letting the rear a bit more loose.

By now I’ve been trying to think of any other recent BMW that has put a similar smile on my face, and I would say the M2 Competition is the one that kept coming to mind. I’ve aways enjoyed the small proportions and low weight of a BMW, so the Z4 speaks to my heart more than I expected. 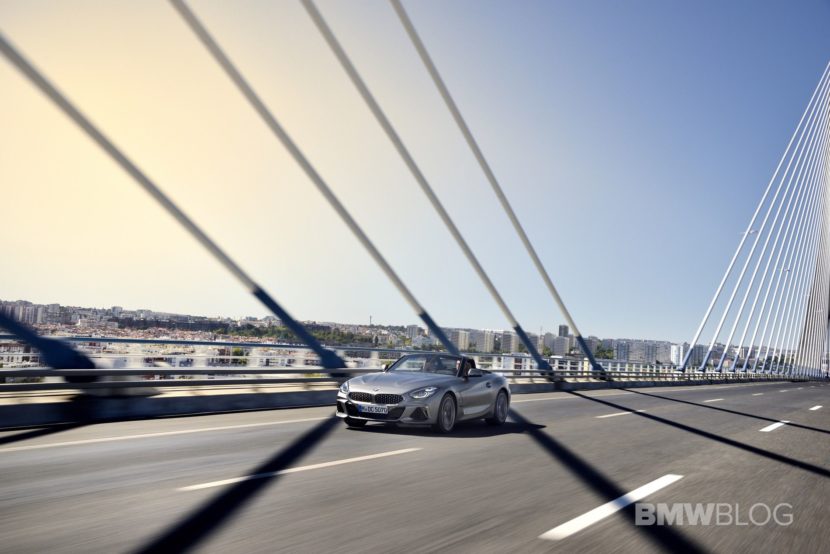 At city speeds or even on the highway, the new Z4 eases effortlessly through traffic, changing lanes quickly thanks to the abundance of torque, and maintains its composure even during abrupt steering inputs.

Now the million dollar question – Is it as fun as the previous more analog “Z” models? Well, I’ve had the chance to briefly drive the Z3 and Z8 Roadsters, and clearly there is a difference in the driving experience. The older “Z” cars feel more raw, more engaging, yet underpowered, while the new Z4 is a roadster of our times, which means it has to accounts for current customers’ taste and preferences, and that has to do more these days with luxury and high-tech. 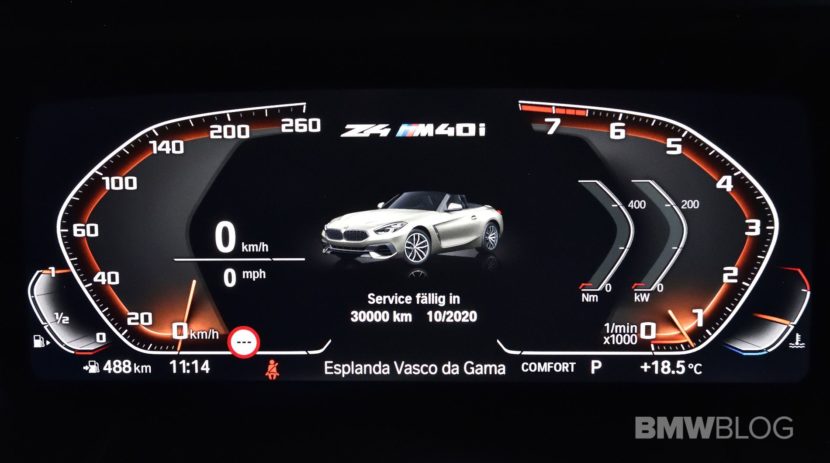 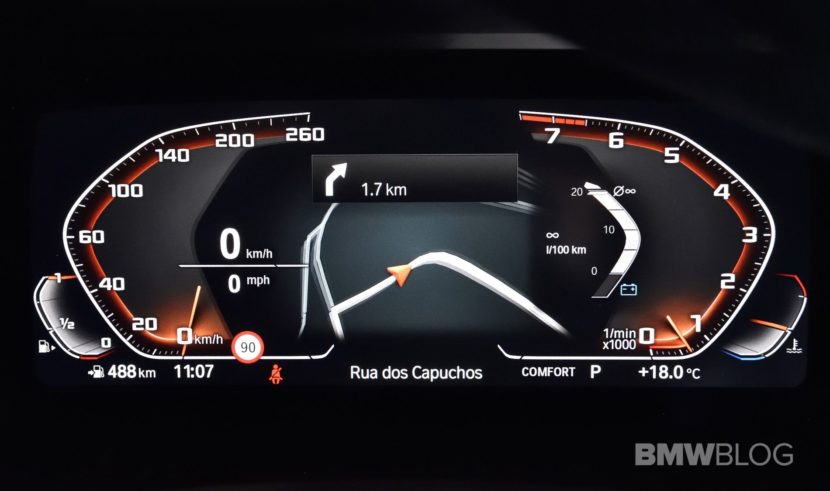 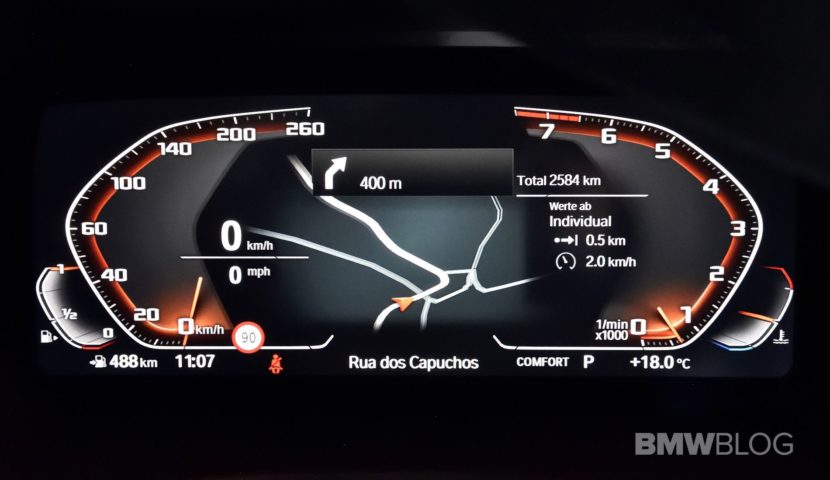 Yet, in my opinion, the new Z4 Roadster doesn’t compromise as much as other recently launched BMWs, and it’s a true open-top sportscar that will cater to a wide range of customers.

Will BMW sell tons of them? Likely not, and that has to do only with the small segment is in, but the new Z4 is the sort of car “that makes you wanna take a drive on Sunday, top down, with nowhere to go but all day to get there,” as my colleague Nico has recently described the Z4.