A few months back, we partnered with BMW of North America in a contest to have fans design their own unique wraps for the new BMW X2. The contest came down to four finalists, which we voted on to choose just two winners. Those two winners have been chosen and they will get to borrow a BMW X2 for a month from BMW North America.

The first winner was James Bolander, who designed an awesome wrap for the BMW X2. With clear Art Car-styling, Bolander’s wrap could fit right in with the best of BMW’s famous Art Cars, done by such famous artists as Andy Warhol and David Hockney. It’s incredibly creative, fits perfectly with the aforementioned Art Car heritage and just works really well with the BMW X2’s funky personality. We recently spoke with Bolander about his wrap. 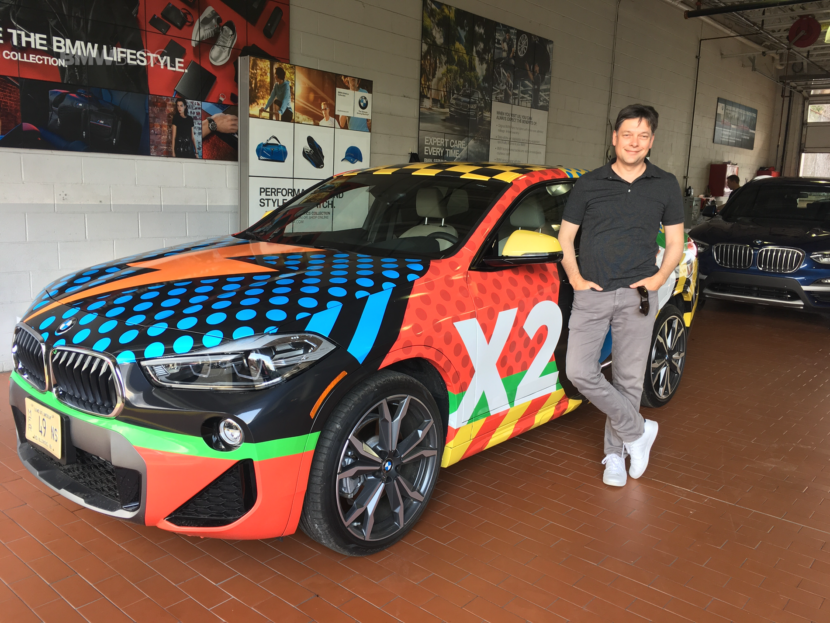 BMWBLOG: What was the inspiration behind the design?

James Bolander: I’ve always really admired the BMW Pop Art Cars, particularly the ones by Alexander Calder, Andy Warhol, Roy Lichtenstein, and more recently, David Hockney. I wanted to create a wrap that paid homage to and incorporated the bold colors and the halftone dot patterns that some pop artists used in their art.

BB: What was the message you were trying to relay with your design? 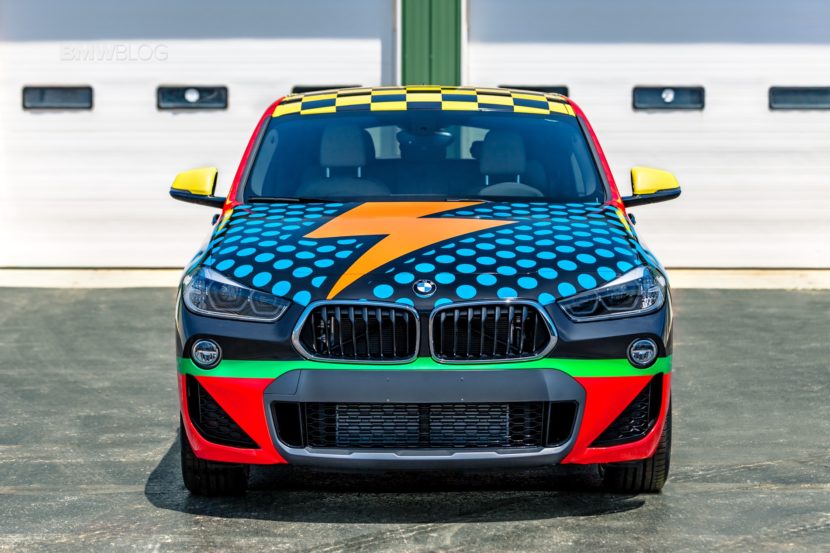 BB: What do you enjoy most about the X2’s design?

JB: I really like the low roof line and the overall sleekness in the design. It looks more like a sport hatchback than an SUV, which is something that I really enjoy. I’m also a fan of the additional BMW badges on the C-pillars.

BB: Is this the first time you’ve designed a car wrap?

JB: I’ve never designed a car wrap before, but when I saw the email about this wrap contest, I thought it would be really fun to see my design come to life if I were lucky enough to be a finalist. I couldn’t be happier seeing it in person – very cool. 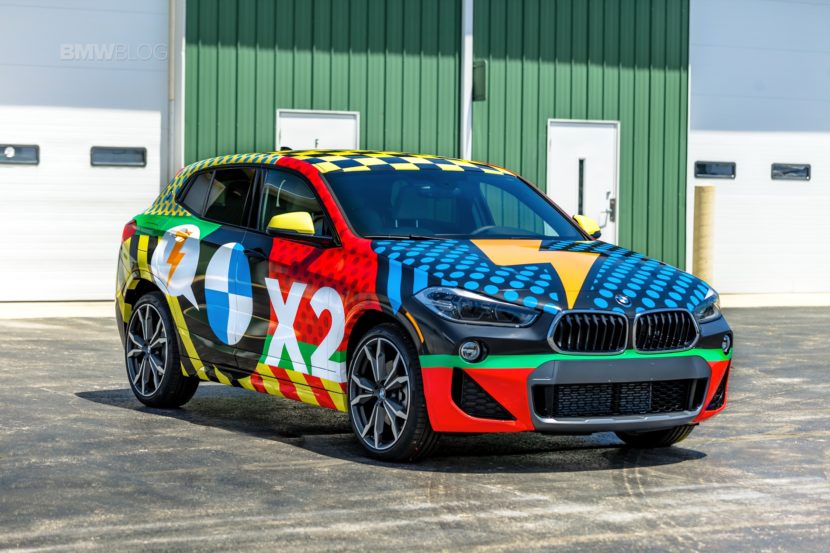 BB: A little bit about yourself and your connection to the BMW brand.

JB: I’m a city-dweller that really enjoys driving for fun whenever I get a chance. My firsthand introduction to BMW was through the MINI brand. In 2007, I decided to test drive a MINI Cooper and the salesperson handed me the keys to a British Racing Green, fully-loaded, performance optioned Cooper S model. I was hooked. I had purchased my first MINI Cooper S, six-speed manual with limited-slip differential that evening, and my wife and daughter have only had MINIs (a total of six different ones) since then. I really got into the customization aspect of these cars, making each one unique, through custom paint, custom stripes and accessories. I currently have a 2009 JCW hardtop and a 2108 Cooper S Countryman.

Clearly, a MINI owner can appreciate the funky, playfulness of the BMW X2. Which makes perfect sense as to why his design is so fitting. Congratulations to James and his awesome wrap. 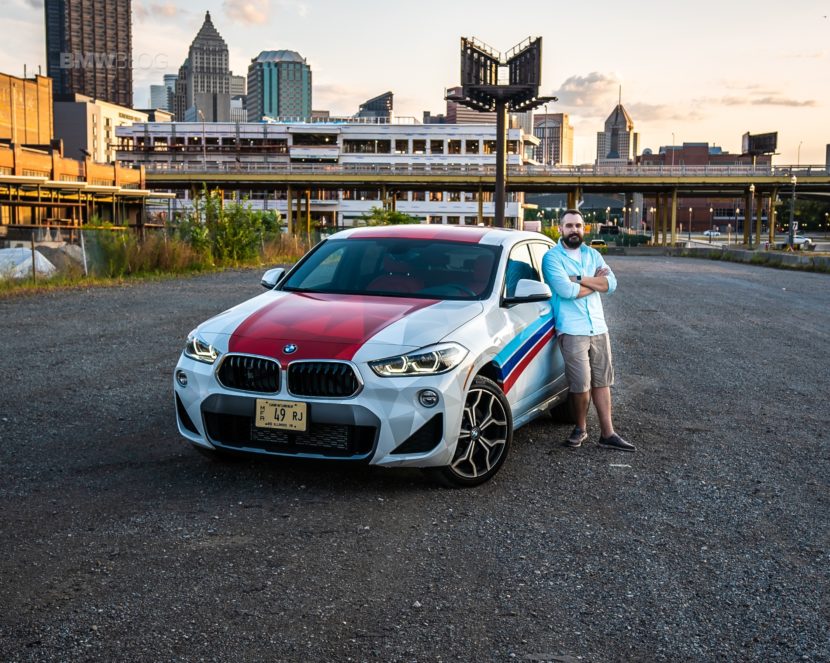 The second winner was Peter Brunetto, who designed an M Sport livery wrap for the BMW X2. This is a wrap we really like, as if gives the X2 a classic motorsport feel, similar to that of the old-school BMW 3.0 CSL, but with a modern twist. Everything about the design, from the M-colored stripes down the side of the car, the fat red stripe that runs the length of the roof and hood, and the triangular shapes that are subtly placed throughout the entire body, is very cool and looks very good on the X2. We also spoke with Brunetto about his design.

BB: What was the inspiration behind the design?

PB: The inspiration for this wrap was the research I did into the 2002s due to the Pittsburgh Vintage Grand Prix. Specifically the 2002 tii touring model. I felt like it was a snapshot of the past when looking to achieve the same results that the X2 has perfected. I also wanted to keep it in line with BMW branding and top it off with M Performance stripes to grab attention and let it be known that this isn’t your average crossover (Hopefully there is an X2 M in the works). The lines of the X2 are amazing and I wanted to make them more prominent and not detract from the design at all. 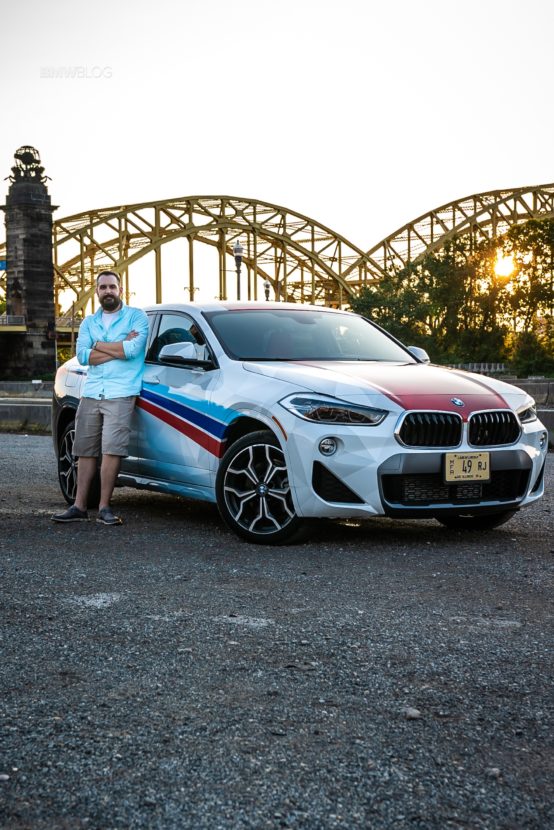 BB: What was the message you were trying to relay with your design?

PB: An abstract dichotomy between the sports car and SUV, the blending of the two and the concept behind the crossover. Function and form combined revealing something else entirely.

BB: What do you enjoy most about the X2’s design?

PB: The front end is just mean looking. It really separates it from anything else on the road. I feel this is something that manufacturers struggle with, and BMW knocked it out of the park. 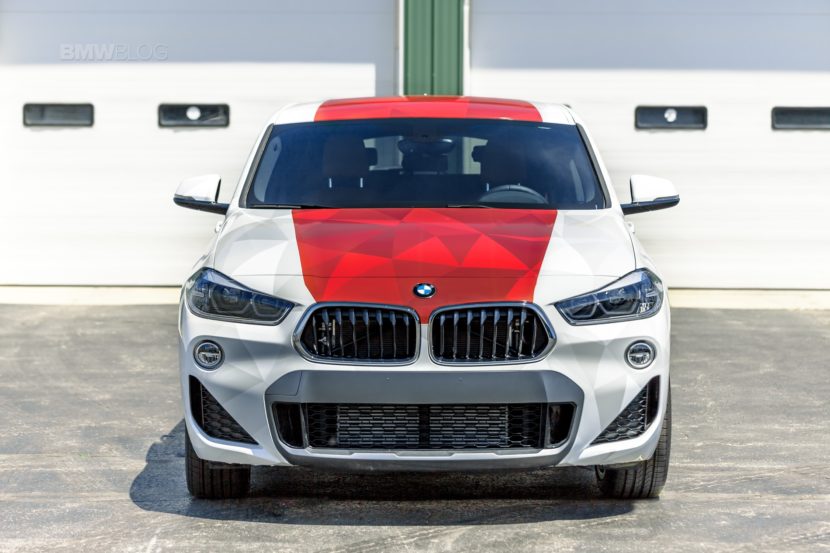 BB: Is this the first time you’ve designed a car wrap?

PB: No, I’ve designed many. It’s a big part of the fun that I have the privilege to partake in as a graphic designer. Wraps are growing in popularity, especially with the performance vehicle crowd. More and more are realizing that we can achieve much greater results with wraps than we can in paint.

BB: A little bit about yourself and your connection to the BMW brand. 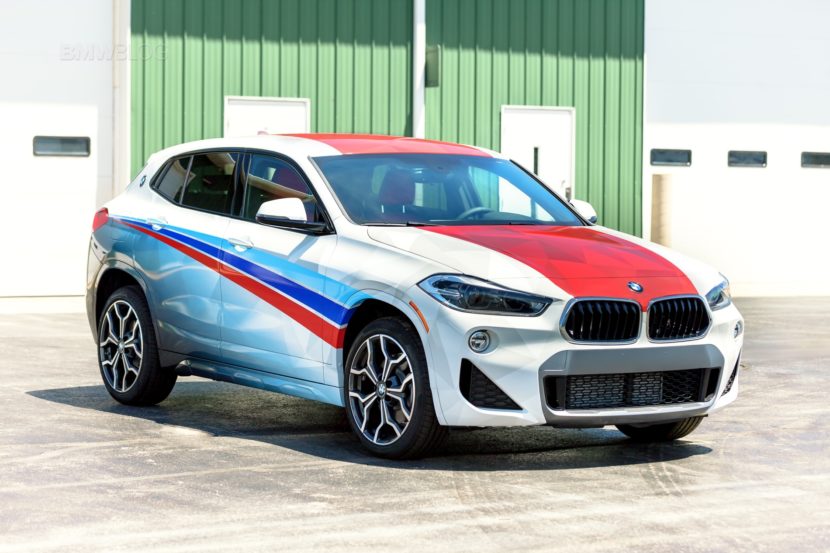 PB: I’m a happily married Pittsburgh local. I am a freelance graphic and web designer. I contract to Direct Results in Waynesburg, Pennsylvania, where I get to do most of my wrap work. 32 years old. Father of a 22 month old son who loves shouting “Race car!” every time he sees the wrapped X2. I have much respect for all manufacturers, but especially for BMW, their history, following, and advancements to create the ‘Ultimate Driving Machine’.

Brunetto’s design is certainly one the evokes the spirit of BMW and its famous Motorsport Division. While there isn’t an X2 M, this wrap certainly blends the two worlds together nicely. Congratulations to Peter.