We recently learned of Harry Metcalfe’s journey to the Arctic Circle in his 1969 Rolls Royce Silver Shadow, a car that isn’t typically associated with sub-zero adventures. However, despite it being a 49 year old British luxury car, from an era when British luxury cars weren’t the most reliable, it held up beautifully. With only some very minor tweaks necessary to keep it running in tundra-like conditions, the Roller was surprisingly reliable.

In this second part of his adventure to the Arctic Circle, Metcalfe hunts down the famous Northern Lights, one of the most stunning and beautiful natural occurrences in the world.

The scenery at the most northern parts of Norway is absolutely gorgeous. It’s the sort of thing that takes your breath away, with snow-capped mountains, old picturesque towns and frozen lakes. And, according to Metcalfe, the Rolls Royce Silver Shadow is the perfect car for it. Norway seems to have pretty strict speed limits, with the highest legal speed you’ll find on most roads being around 80 km/h (about 50 mph). So the Silver Shadow is perfect for it, as it’s not very fast but it’s very good at just wafting along at sane speeds and allowing the scenery to come to you, in a quite, comfortable and classy cabin. 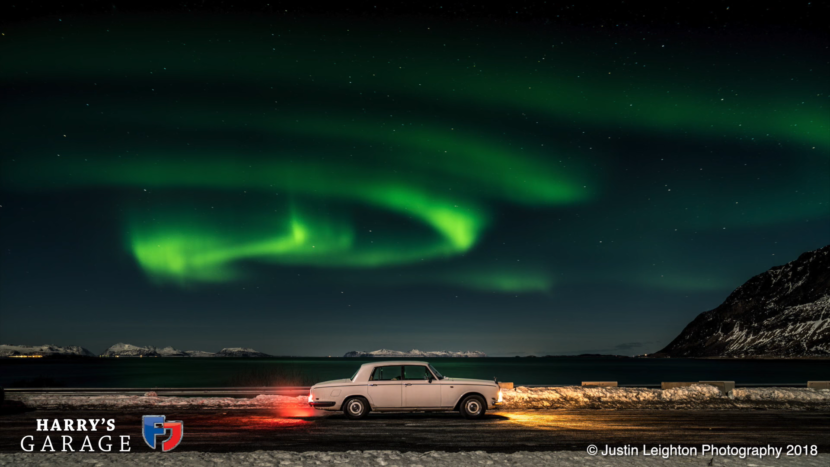 When he finally gets to the Northern Lights, the photographer he hired takes some amazing photos. There are a couple of the Rolls Royce in the middle of the road with the stunning green glow above it. It must have been breathtaking in reality, both seeing such a stunning sight and experiencing the climax of that journey. What an adventure.

It’s also not the sort of thing anyone would ever do, and it may be the first time anyone’s ever done it, in a Rolls Royce Silver Shadow. So kudos to Harry Metcalfe for having the courage to take such a car there and showing it to us all.