VIDEO: Take a closer look at the BMW M2 Competition

BMW just launched its brand-new M2 Competition, the sharper, angrier version of every BMW fan’s favorite car. While the BMW M2 Competition isn’t as extreme as something like the E46 M3 CSL, it’s still sharper than the standard car and it could have just enough edge to make it a future classic. In this new video from BMW, we get a bit of a closer look at the new M2 Competition.

As the lights come on and the dramatic music cues, in this new video, we get a look at the M2 Competition that’s better than what we can get in photos. In the video, you actually get to see how light touches the paint, how it dances around the car. And it definitely seems angrier than the standard car. Those new Kidney Grilles, like flared nostrils, have become larger and more angular, making the M2 seem as if it wants to fight. It also gets side mirrors from the BMW M4, replaceing the standard 2 Series ones on the regular M2.

Then you notice the wheels, 19-inch “Y-spoke” pieces that look far sportier than the standard M2 wheels. The latter are pretty plain and look like they could belong on literally any BMW. These new M2 Competition shoes look like the belong on something properly sporty and they’re also some of BMW’s best wheels of late.

We also get a peek inside the new M2 Competition, which has some improvements as well. Mainly the seats, which have been pulled from a BMW M4 and given some tweaks. So they feature blue or orange contrast stitching (color choice is optional), as well as illuminated “M2” logos in the seatbacks. They look far better than the seats on the standard BMW M2, which are from the regular old 2 Series. Which was always rather annoying, that the BMW M2, top-of-the-line 2 Series, has the same exact seats as the economy-minded 220d. So these new seats are a rather welcome addition. 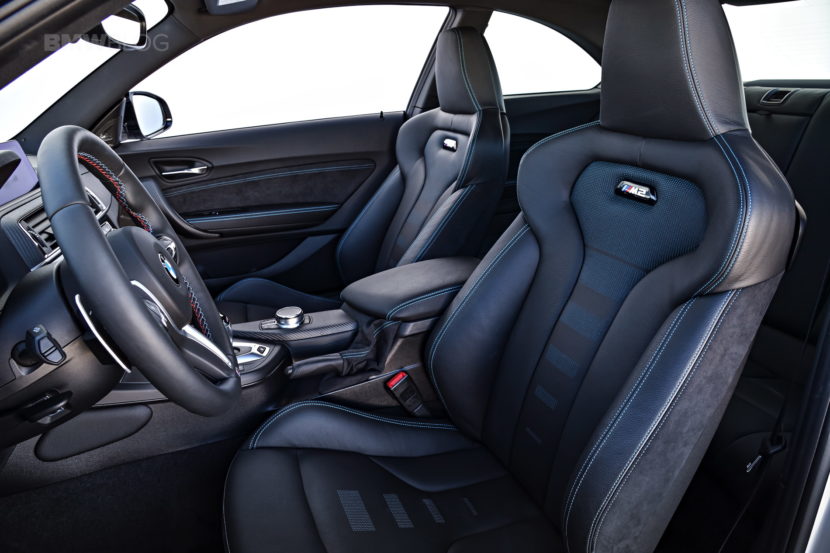 Under the hood, the BMW M2 Competition gets a tweaked version of the BMW M4’s engine. It’s still a 3.0 liter twin-turbocharged I6 engine but it makes 410 hp and 406 lb-ft of torque for M2 Comp-spec. That’s 15 horsepower less than the standard M4 but the same torque. Said engine is paried with either a six-speed manual (as-standard) or a seven-speed DCT. BMW claims 0-60 mph in 4.2 seconds with the faster-shifting DCT and 4.4 seconds with the manual.

If you want your BMW M2 to look a bit more aggressive without taking it to a tuner, the M2 Competition could be the car for you. Plus, it gets more power tweaked steering and a tuned electronically-controlled differential. So not only does it look angrier, but it will drive angrier as well.