The upcoming BMW M2 Competition is one of the most highly anticipated Bavarians to be in the pipeline. Fans can’t wait to see what BMW has in store for a more powerful, more hardcore version of their favorite M Division product, the M2. We’ve heard a lot of rumors and seen several spy photos but now there seems to be some official photos and information that’s just been leaked, two weeks ahead of its official reveal.

While these photos look more like marketing photos for a Need For Speed video game than official BMW photos, we’re hearing that they’re legitimate. So too, we hear, is the information about the BMW M2 Competition. In these very colorful photos, we can see that the M2 gets a suite of new visual upgrades. On the outside, it gets new, more angular kidney grilles, some vents in the lower front lip, side mirrors from a BMW M4, all-new, much larger wheels and black badges throughout. Two wheels will be available: 437M and 788M. 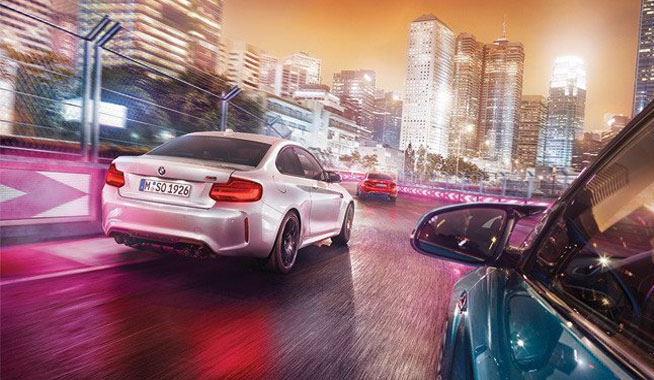 On the inside, it gets the seats from a BMW M4, a red starter button and “M1 and M2” buttons, which indicate configurable drive settings, like on all of its bigger M siblings. Basically, this looks like a BMW M2 — M4 Edition.

According to the leaked information, the BMW M2 Competition will use the same S55 3.0 liter twin-turbocharged I6 engine as the BMW M4, but will be making 410 hp and 405 lb-ft of torque. This leak says that BMW claims a 4.2-second 0-60 mph time but that seems seriously conservative, considering a standard BMW M2 with a DCT does that, or faster, already. So a lighter, more powerful version could break into the three-second range.

The official reveal for the BMW M2 Competition will occur in a couple of weeks and we’ll get to really see the car then. But from what we’re seeing here, it looks very promising. It looks more aggressive, with very good looking wheels, has quite a bit more power and should be significantly faster. Let’s just hope it doesn’t lose some of that M2 purity in its handling.