At the moment, the new F90 BMW M5 is lighting up the internet like wild fire. It’s the hottest car out right now and deservedly so. Not only is it the latest in a long line of historic cars but it’s also the baddest performance sedan on the planet. In fact, Car and Driver just recently tested the new M5 and it’s the fastest sedan they’ve ever tested from 0-60 mph. So it’s a serious machine. And this new review from Auto Express confirms that.

First, let’s talk a little bit about what the M5 is. The new F90-generation of BMW M5 sports a 4.4 liter twin-turbocharged V8 that makes a whopping 600 hp and 553 lb-ft of torque. That engine is paired to an eight-speed automatic gearbox and, for the first time in history, an all-wheel drive system. Not only is this the first ever M5 to have all-wheel drive but it’s the first ever non-SUV M product to be power four wheels. That all-wheel drive system can be switched to just rear-wheel drive whenever the driver pleases. So it can either be a straight-line rocket or a sideways tire-scorcher. According to BMW, the new M5 can sprint from 0-60 mph in 3.2 seconds but C&D recently recorded a 2.8 second time, which is insanely quick. 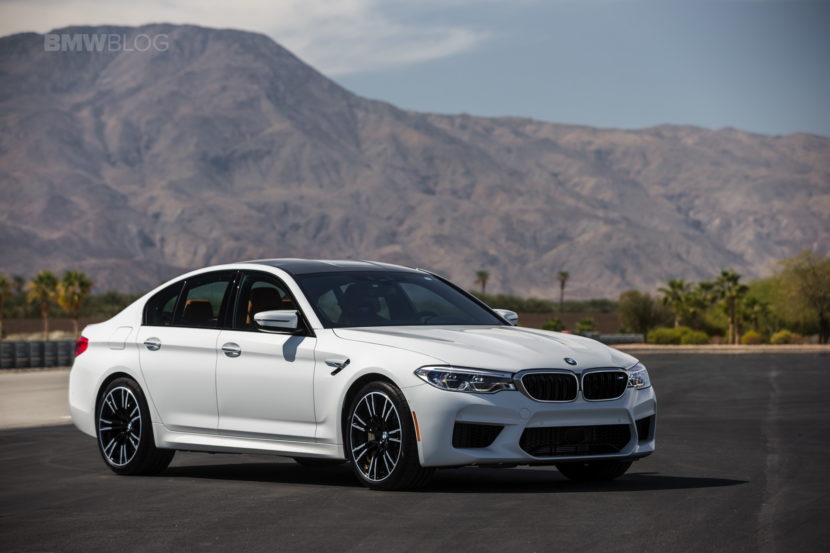 So how does Auto Express feel about the new M5. Well, they seem to like it quite a bit. What’s impressive is how enjoyable the M5 is to drive, despite being all-wheel drive. Most enthusiasts were worried that its all-wheel drive system would prove that BMW is more concerned with going fast in a straight line than actually making a proper driver’s car. It hasn’t, though. “The BMW’s incredible performance and sweet chassis mean that whatever mode you’re in it’s a true driver’s car: so much so you could forget you’re driving a large saloon.” said AE.

We’ve driven the new BMW M5 on both road and track, at low speeds and at high speeds, in a straight line and very sideways. So we have some experience with it and we completely agree with Auto Express. I must admit, I was a bit apprehensive about the new M5 and its all-wheel drive system myself. However, not only does the new F90 BMW M5 deserve its incredibly prestigious badge but it may be the best-ever representative of it.