This current-generation of BMW 1 Series is on its way out, despite being beloved by enthusiasts. Said enthusiasts are sad about its departure, rather than being excited for the new model, as the next generation of 1 Series will lose its rear-wheel drive layout, the very thing that made it unique in the segment. Replacing it will be a front-wheel drive hatchback (and sedan) that will likely infuriate the purist fanbase. If the new 1 Series’ lack of rear-drive makes you upset, you may not want look at these recent spy photos. (We don’t own them but the exterior shots can be seen here and the interior shots here)

From the outside, if we didn’t tell you this was the BMW 1 Series, you’d likely think it was some sort of Korean, econo-box hatchback. While Korean hatchbacks aren’t bad (the Hyundai Veloster N looks pretty awesome), it’s just not something you’d expect from a prestigious brand like BMW. So when the BMW 1 Series seems indistinguishable from a Hyundai or KIA hatchback, while under camouflage, some enthusiasts are going to get upset. 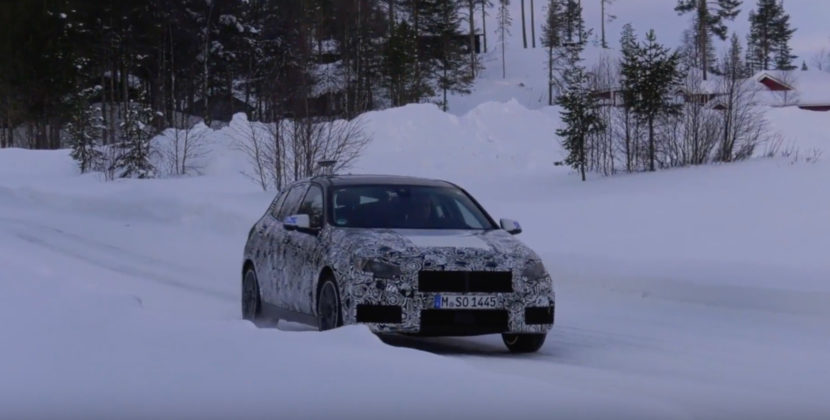 Having said that, the actual shape of the car is unoffensive and fine and it will probably be a handsome car. The brand’s signature Hofmeister Kink remains and its headlights seem very similar to those on the new BMW Z4. So it should have some distinct BMW touches, even if it’s not the most Bavarian looking of cars. And, hey, those wheels look good, too.

If you look at the new interior photos, you’ll find a very interesting looking cabin for BMW. While the steering wheel is very typical of a modern Bimmer, the rest of it is very new. Let’s start with the center console, which sports some new stuff. For instance, the shift lever is new and is similar to the one on the new BMW M5, only smaller. It also gets its “Start/Stop” button on the console, next to the shifter. It also seems to have a new iDrive control wheel, similar to those on the new 3 Series, Z4 and 8 Series. So it seems as if that’s the new direction BMW is going in.

What’s also new is the dash layout, which is actually similar to *gasp* Mercedes-Benz. We knew that BMW was going with a new, entirely digital gauge cluster moving forward, starting with the new 3 Series. We’ve seen it spied before and it seems to have the same graphics as the 8 Series Concept, which is really cool. So it’s not really a surprise that this 1 Series has a massive screen rather than gauges. What is surprising is that immediately to its right is its iDrive screen and they seem to be connected at the middle, making one giant screen. It’s a very similar setup to what you’d find in any modern Mercedes-Benz product and that’s sure to upset some BMW fans.

This new BMW 1 Series is really shaking things up at BMW. It’s going to be a front-wheel drive hatchback with an atypical BMW design, a new center console layout and a Mercedes-esque dash design. In the immortal words of Keanu Reeves, “Whoa”.