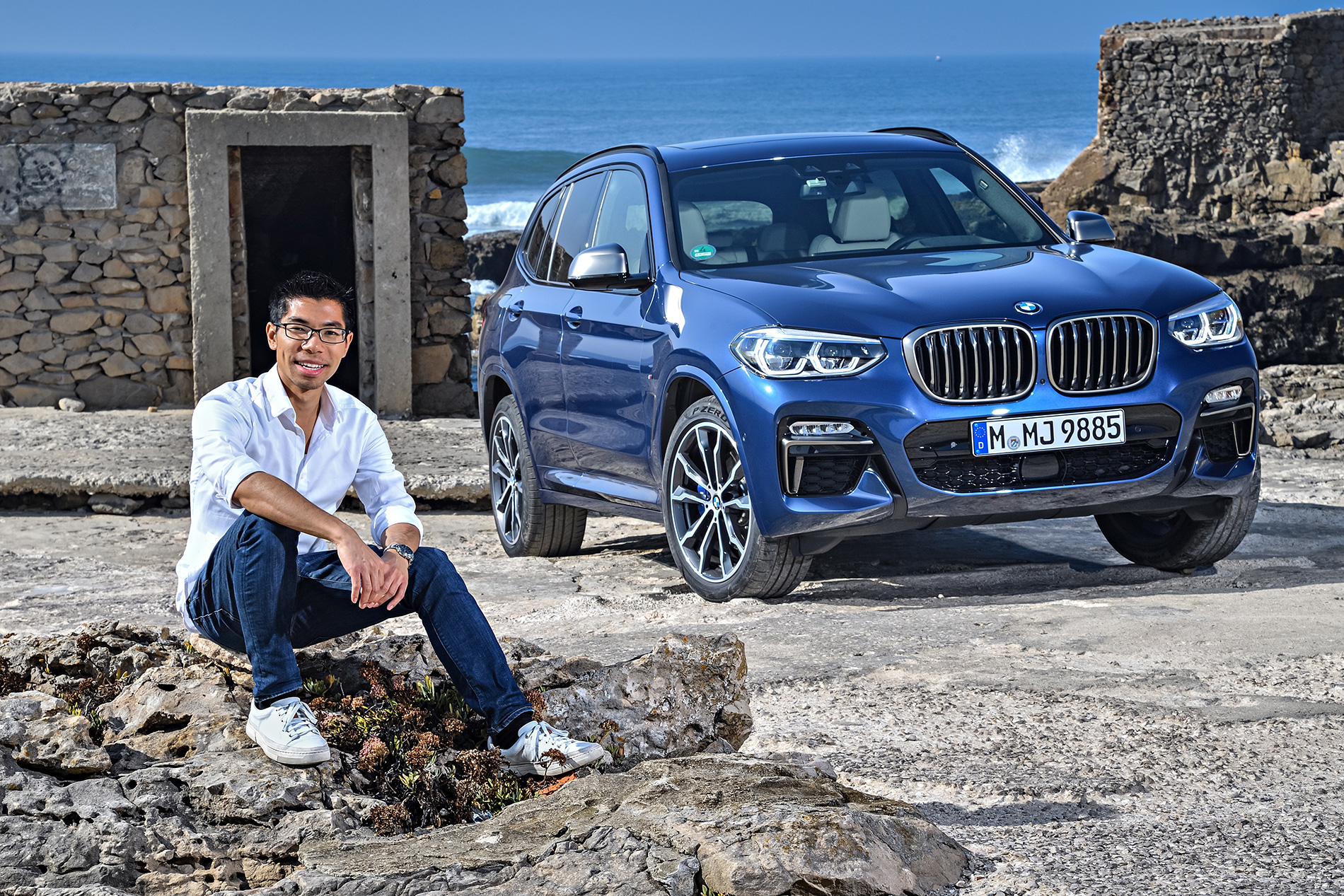 Calvin Luk has been one of the most important designers at BMW in recent years. Having penned the refreshed 1 Series Hatchback, which dramatically improved its looks, Luk has been one of the favorite BMW designers among many fans. He is also the man responsible for the new BMW X1 and now the new BMW X3. And he just gave us the BMW Concept Z4 as well.

His best creation to date is arguably the new BMW X3, the mainstream SUV which brings a refreshed look to the BMW SUV lineup and some interesting design cues. To learn more about the X3 and Concept Z4’s design, we reached out to Luk for an interview describing in detail the thought process, not only behind the X3, but around car design in general.

How did the BMW X3 come to life and what were some of the initial design requirements that you had to adhere by? 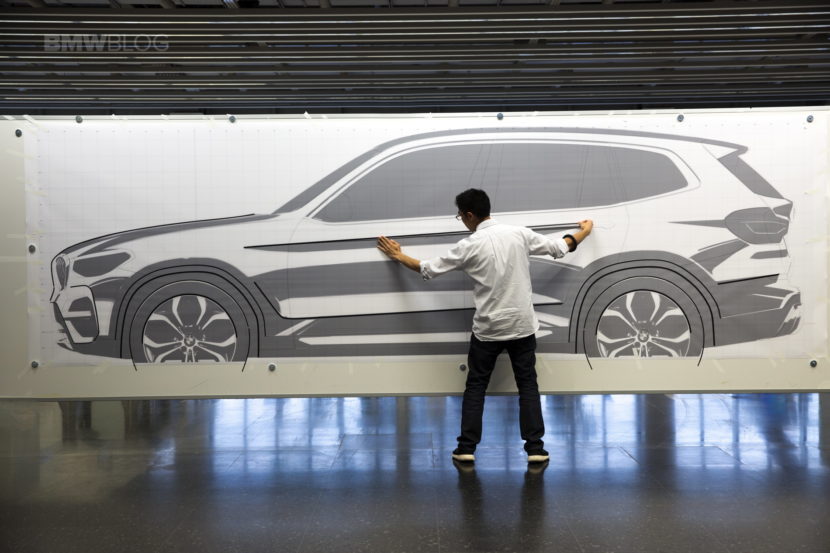 When it came time to start thinking of the next generation X3 we started with the intention to make the car sportier and tougher. Proportionally, we stretched the car, increasing the wheelbase by roughly 55mm, and toughened up the stance with 10mm extra width
and larger wheels.

With the foundations set, there was an internal competition amongst the designers, producing a bandwidth of sketch proposals. Those with the most potential were selected, and explored further by making ‘tape drawings’ – think of these as 2D full sized renderings made out of black tape, filling up the entire wall. They help to visualise a design over an engineering package, and to translate our ideas from 2D to 3D.

During and after this period, the models were developed in 3D computer programs, followed by full-scale clay models. Working with a team of clay sculptors, we refined the volumes and surfaces of the cars. After the final design has been selected by the BMW board of management, we were busy refining surfaces and incorporating technical considerations in preparation for manufacturing and bringing it to the street!

What was the thought process going from designing the X1 to the X3? Any influences? 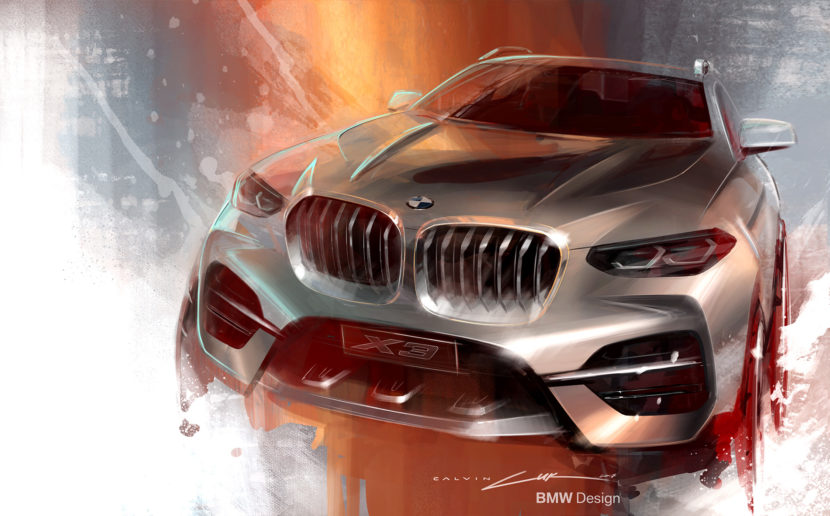 The BMW X1 and X3 are brothers in the X-family and both showcase corecharacteristics of strength, power, and confidence. The X1 being the younger brother is more youthful, and the side-view gesture has more wedge (front low, rear high) giving it an ambitious ‘go-getter’ attitude. The X3 is bold and powerful, it utilizes large kidneys positioned high up for an upright posture with lots of presence, and it is combined with a more horizontal side-view gesture to express maturity, sovereignty and elegance.

Would you describe the new X3 as being more muscular, sportier than the second-generation?

Certainly, the new BMW X3 has been to the gym. It is more muscular, powerful, and imposing – more ‘X-ness’. Simultaneously it gains elegance and sovereignty.

What were some of the most challenging elements to design on the X3? What lines are you mostly proud of? 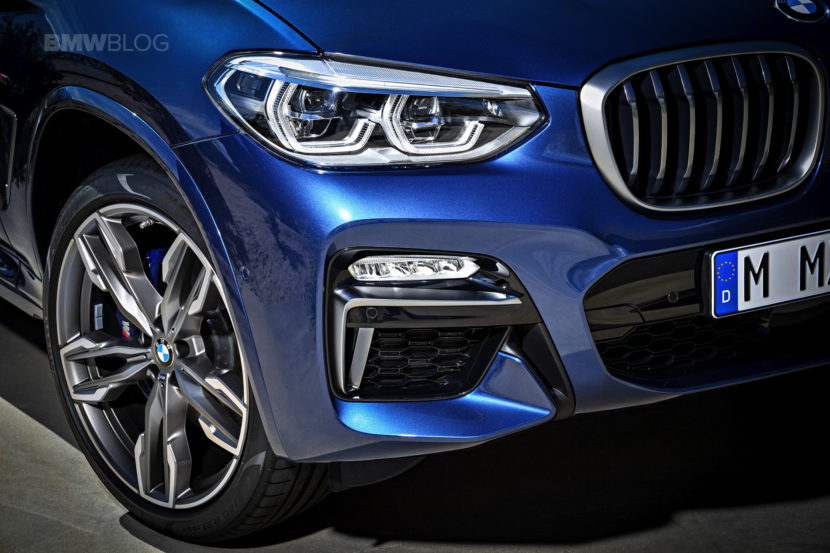 I love that the powerful kidneys lead the charge forward on this car. A strong, thick chrome surrounds the kidney, with triangular lines tapering from the corner of the kidneys towards the hood and flowing back to shape the headlamp contour. This makes the kidneys feel like they protrude out from the hood creating more presence.

The new wheel arches is something I am very happy with too. They are a very unique shape combing a rectangular and trapezoidal form. It achieves a character which is both ’rock solid’ and dynamic with its forward push.

The shadow under the main character line in side view is newly interpreted, it starts at the front wheel and tapers away at the rear door handle, picking up again after the rear fender as it opens up into the tail lamp. The open area in between, allows for a clean, modern feeling powerful rear fender. The strong shoulder in the rear view, gives the cabin a solid foundation to sit on and further emphasizes the power to the wheels. 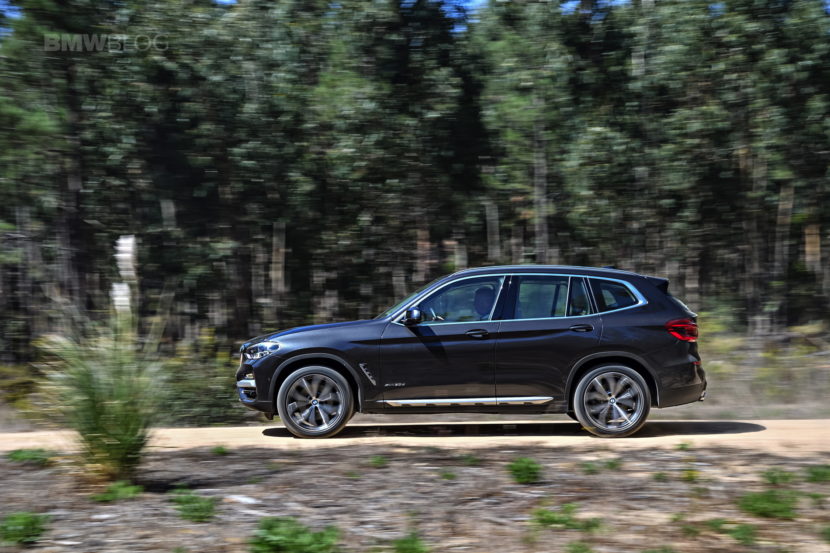 Perhaps one of the most challenging elements was reaching our ambitious aerodyanmic goals. A few aerodynamic gains come from the active kidneys, air curtain, closed underbody. The extra length of the rear spoiler improved the aerodynamics greatly. Design-wise, the extended roofline stretches the side view becoming more sporty and elegant. In rear-view you notice a notch which dips down in the middle of the spoiler, this not only looks sporty but reduces the aerodynamic cross section, improving efficiency. We are very proud to achieve a drag co-efficient of 0.29 and giving the BMW X3 best in class aerodynamics. 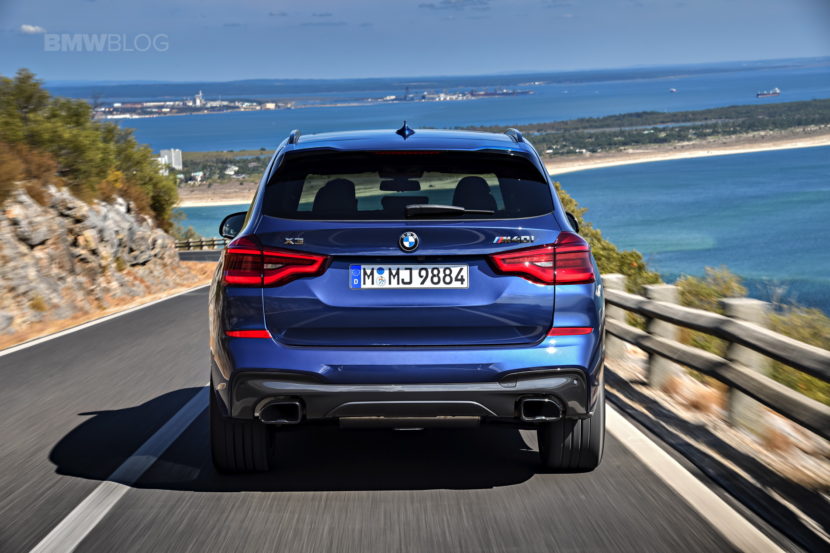 The X3 uses the sculptural form language, but the future of BMW design seems to be focused on simpler shapes, less sculpture. Any thoughts on that?

Sculpture is one of the core elements of emotional car design, and is still very important to us at BMW Design. As seen in some of our latest concept cars, we are focusing on fewer lines, and more (not less) sculpture in the surface. For example, when I designed the exterior of the BMW Concept Z4, we spent a great deal of time defining the one main ‘master’ line, stretching up from the body side over the rear fender, which would control and drive all the surrounding highly sculptural surfaces.

The BMW X3 already moves in this direction. We reduced the number of lines above the wheel-arches and gave more space to the front and rear fender surfaces, to emphasize the car’s power and muscularity.

What colors do you think best showcase the design of the new X3?

During the development, we often assess the form with a neutral silver paint, so it is refreshing for me now to see the X3 in so many new characters with the different color options hitting the street.

What would be your ideal X3 configuration? 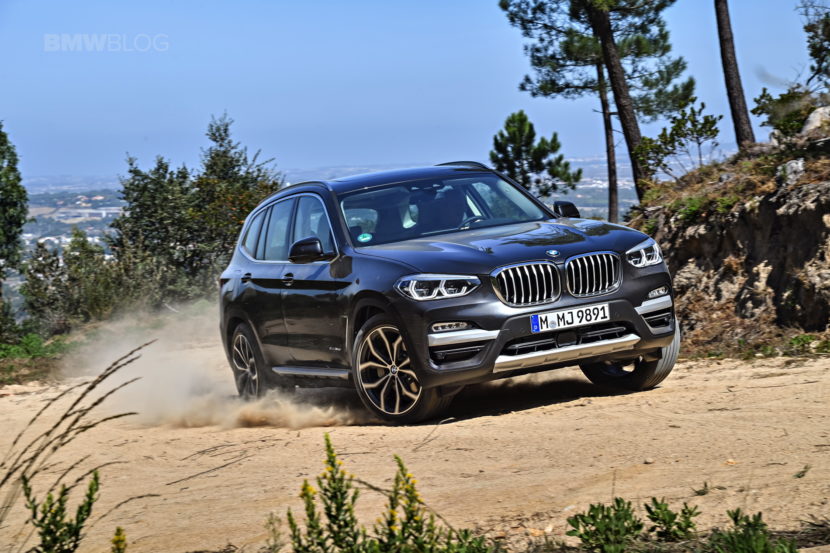 It’s hard to choose, each is different. The M Performance M40i’s powerful robust exhausts are especially cool. The new Luxury line features great attention to detail with its elegantly crafted integrated chrome accents. The X-Line emphasizes power, with bold accents reflecting the structural rigidity beneath the skin, and has the BMW X “Go anywhere, do anything, Let nothing stop you” character. Basically, to answer your question, my ideal configuration is the anything with the 21 inch wheels!

As a designer, how do you transition from designing two production series SUVs to the BMW Z4 Roadster Concept? 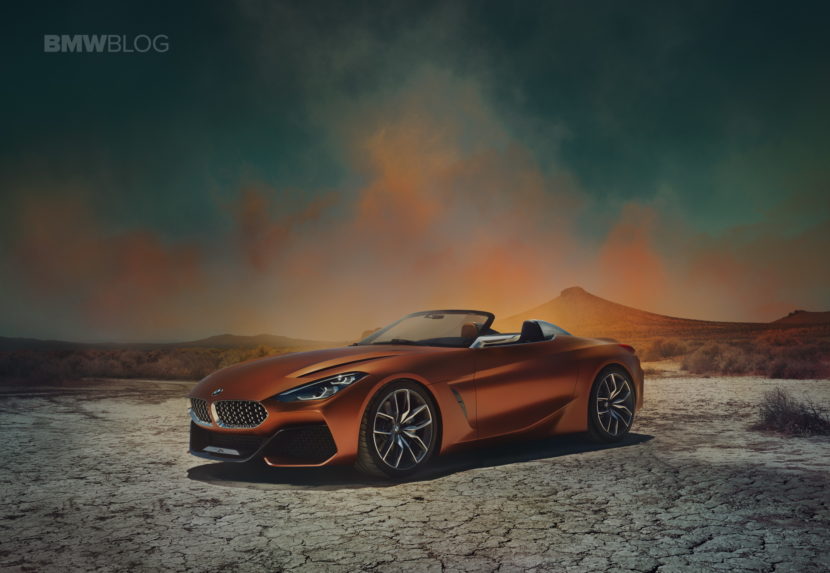 Seeing the cars I’ve worked on, driving around enjoyed by so many in all parts of the world is a truly rewarding and emotional experience. It is a huge honor to have designed two production SUVs the X1 and X3, and to be now working from X to Z. The X cars are a blend of the emotional and rational, being both sporty and versatile in its functionality. With a roadster, the approach is more expressive, the shapes and proportions are more extreme. 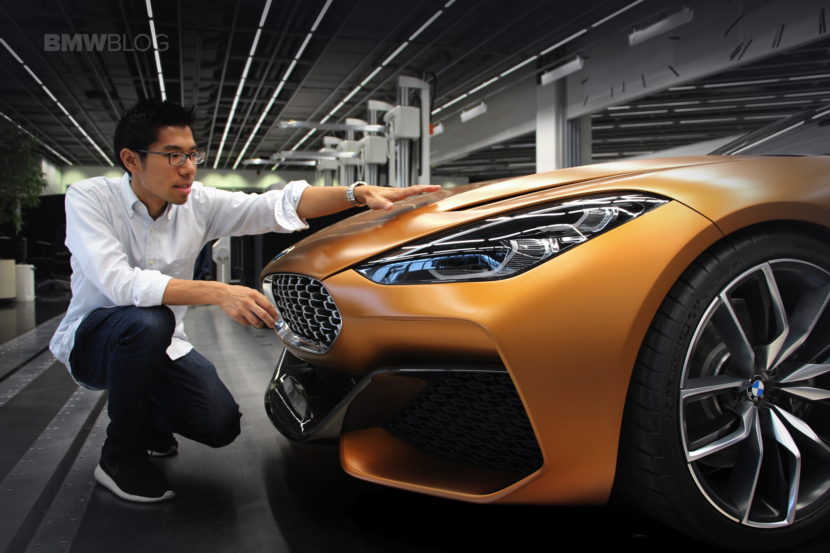 Being a Z4 driver myself, the BMW Concept Z4 was a very personal and emotional project. As I was sketching out the design, I wanted to capture the intense, emotional thrilling driving experience of the roadster in which all senses come alive. I am very proud of the way it came out including the shark nose character and the BMW Z8 inspired proportions on the front end.

As touched on earlier, the design form language takes a step to the future, less lines, more sculptural surfaces. The main ‘master’ character line starts above the side air vent, rising over the rear wheels and fender, wrapping around to the rear, and ends forming the 3D tail lamp. This is done all in one sweep and controls a highly emotional composition of surfaces below the line, where surfaces start from a downward facing air vent, twist while moving towards the rear wheel, and invert to face upwards towards the sky as it forms a powerful rear fender muscle, giving the car it’s dramatic stance. 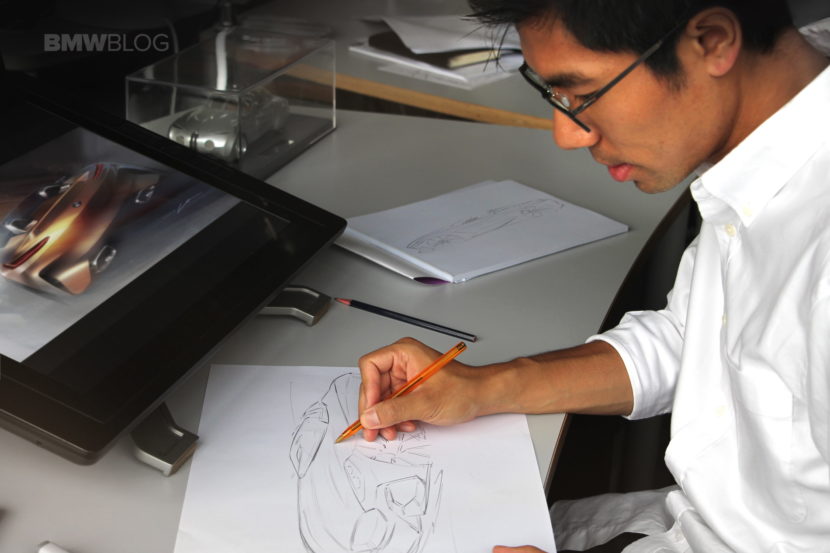 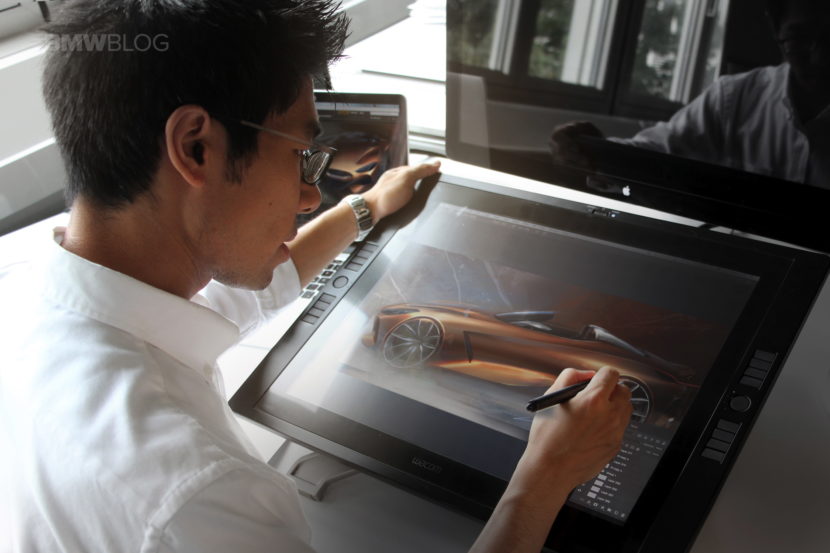 The car’s character is completed with the dual layered carbon aluminium wheels and my favorite feature, the dramatic speedster-esque roll over bars which extend from the rear seats showcasing an emotional machine.

Growing up, I remember when the BMW Z3 came out followed by the iconic and exotic BMW Z8 in the James Bond films, I recall sketching these cars over and over in my high school books. As the first generation BMW Z4 launched in 2002, I was so captivated by its twisting surfaces, it reaffirmed making car design my career path. I loved the BMW roadsters and dreamt of one day owning one and also designing my own.

The BMW Concept Z4 was a dream project. I believe the drama and passion of this car truly captures the spirit of the words, “Ultimate Driving Machine”!