BMW Ranked Third Most Valuable Auto Brand in the World

The 2017 Interbrand Best Global Brands report was published this week and there were a couple of surprises thrown in the mix. Of course, the top of the pile was once again dominated by Apple, Google and Microsoft but the remaining 97 top brands in the world duked it out nonetheless. In the automotive field, BMW was placed among the top three best brands in the world, right under Mercedes-Benz and top-dog Toyota.

Toyota, BMW’s partner for a couple of projects, including the new Z4 and a joint venture in electric and hybrid vehicles, came in seventh overall. Mercedes-Benz rounded up the top ten while BMW was rather stagnant at number 13. Other interesting developments could also be observed. For example, Toyota remained the top brand in the automotive field despite losing about 6 percent of its value compared to 2016. 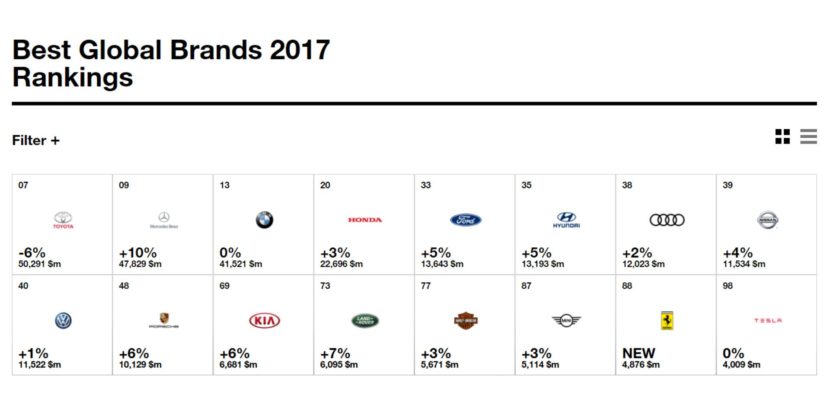 Mercedes-Benz went up by 10 percent to $47.8 billion while BMW apparently remained flat with a value estimated at $41.5 billion. Nonetheless, these three brands did a lot better than those coming in a lot lower in the rankings. The next auto brand in the top 100 came in on the 20th place and it was estimated at a value of roughly $22 billion, Honda posting a 3 percent increase. Next up was Ford with a 5 percent increase, rated at $13.6 billion followed by Hyundai in 35th place and 38-placed Audi.

Another BMW-owned company made the top 100, MINI being placed on the 87th place. Tesla just made the cut, being placed on the 98th position while veterans like Ferrari came in 88th, this being the first time the Italian brand broke into the Interbrand’s top 100. The report generates its rankings based on three key aspects that measure financial performance and a brand’s ability to influence customer choice and command a premium price or secure earnings.