We talked about Manhart’s MH3 550 before as it really is a special car to begin with. However, nobody ventured so far as to do a good, proper review of it and that’s really a shame. Well, Shmee definitely didn’t shy away from the opportunity when it arose and traveled to Germany to take the 550 HP beast out for a spin. Even though he too missed on some of the crucial things we enthusiasts were hoping to find out about the car, his take on it is the most detailed we’ve seen so far.

Under the hood of the Manhart MH3 550 hides a considerably more powerful version of the standard S55 engine the car came with as standard. This particular MH3 is not your run of the mill BMW M3 taken to new heights in terms of power. This one was based on a special edition model that celebrated 30 years since the original M3 was launched. Dubbed 30 Jahre M3, the limited-run sedan was built in just 500 units worldwide. 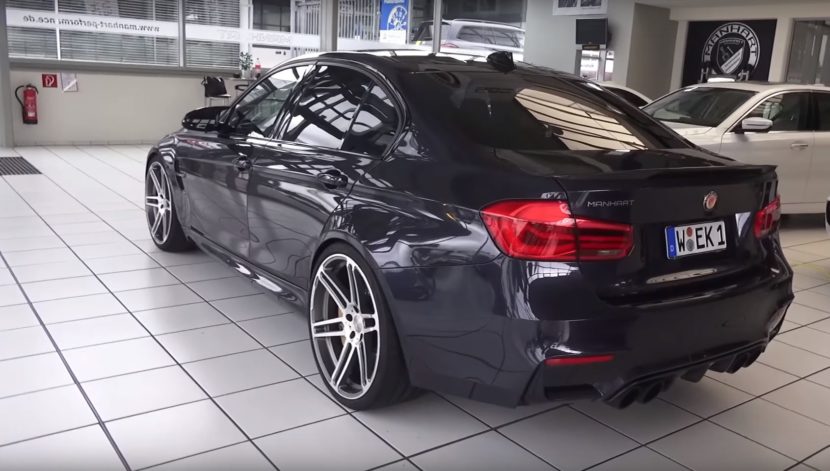 Furthermore, the allocation was different depending on the country you live in. For example, as Shmee points out, the UK only got 30 of them while the allocation for the US was 150 units. Therefore, this is a rare M3 and it does come with some bespoke finishes. Under the hood, for example, the car used to have 450 HP and the same 406 lb-ft (550 Nm) of torque the standard M3 comes with. When Manhart was done with it though, things were taken up to 550 HP – as the name suggests – and 700 Nm (516 lb-ft) of torque. Considering all that is going to the rear wheel, such figures demand a whole new respect when it comes to touching the gas pedal.

That’s not all though. The 30 Jahre M3 also came in only one color, a throwback to the original E30 M3. The Macao Blue shade is absolutely stunning in the first place but it does work brilliantly with Manhart’s carbon fiber vented hood which helps cool down the engine while also looking cool. Round the back, the Manhart bits are noticeable once again when looking at the diffuser which encompasses four exhaust pipes for the custom Manhart exhaust which is possibly the loudest M3 exhaust on the market right now.

And while we didn’t get to see just how manageable that extra power on the rear axle is at the moment, Shmee did give us a proper tour of the car in the video he posted online. Let’s just hope the next person that gets his or her hands on the MH3 550 will also get dry roads and the chance to feel just how different the car is from the stock version.