Home » Models » BMW i » Video: Project #SELFi8 – Exploring the Shapes of the BMW i8 CrossFade Edition 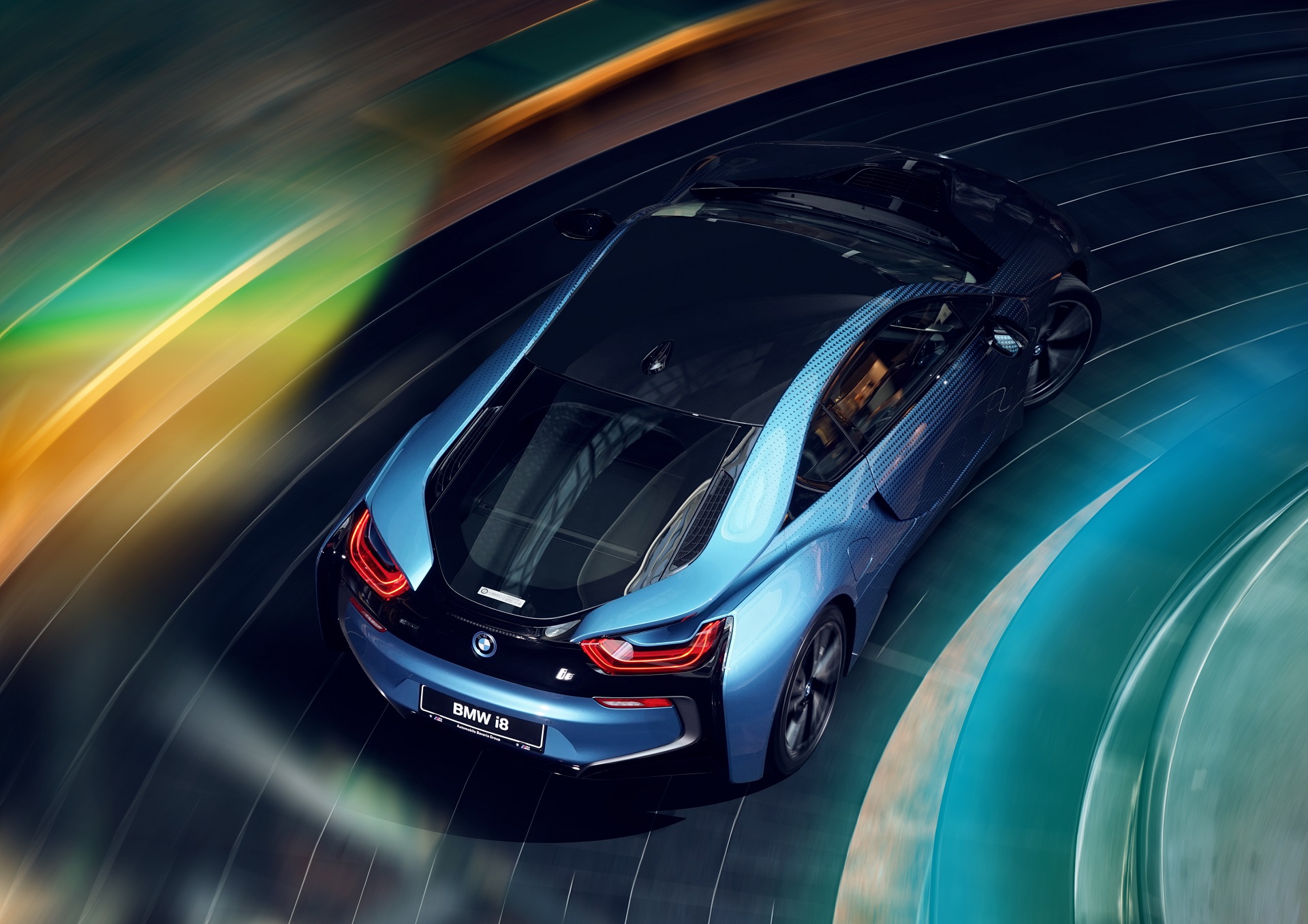 The one thing that surprised people the most when the BMW i8 was launched was, without a doubt, the design the production car had. Having been previewed by a concept that looked like it came straight from the future – as most concepts do – a lot of people expected the Germans to tone things down on the production car. Luckily for us that didn’t really happen. Some features were lost, that much is true but who needs transparent doors anyway?

In the end the production i8 was and still is a visual masterpiece and people the world over fell head over heels in love with it from the moment its veils were taken off. From the sharp front end to the butterfly doors to the wind tunnels at the back, everything looked on par with the technology hidden underneath. Sure, getting in was, and still is, a bit of an issue but nobody really cares when you’re dealing with such beauty. And that’s exactly what the good people at BMW Romania focused on when they put together their latest project.

After stunning us by taking classic BMWs on what Jeremy Clarkson called ‘the best driving road in the world’ in his typical fashion, the guys from Bucharest will have to work extra hard to impress us even more. And yet, this project might just do the job. The idea behind the so-called #SELFi8 project was to explore the car’s design from four different points of view. Therefore, four of the best photographers in the country were invited to spend some time with a very special edition of the BMW i8 inside an empty shopping mall and put together their own perspective on what sets the i8 apart. The results were meant to both emphasize the design of the plug-in hybrid sports car but also to show us how each artist viewed it, and what they deemed most important through their cameras’ viewfinder.

Without a doubt, the hero of this whole ordeal, the centerfold if you will, was the car, a 1 of only 10 BMW i8 CrossFade Edition models put together by Garage Italia. The car was shown to the world last year but the deliveries have only begun, one of them reaching Romania, for a special exhibition which will kick off tomorrow at the location where all the beautiful shots you’re about to see were taken.

„We want to encourage the public to explore and discover the BMW i8 design, as it is so spectacular. We have seen in the past that everybody wants to take pictures with the car, so why not make the presentation of the BMW i8 exactly about that. This is how the #SELFi8 project was born. We invited four visual artist to explore the BMW i8 design in their works therefore becoming a sort of guide for the onlooker. The shopping gallery as a shooting location for a car is unexpected, but that’s what makes it so striking and spectacular. Furthermore, an environment so rich in lights and reflections is challenging, but at the same time visually very appealing”, explains Dana Popescu, BMW i Romania Brand Manager.

As for the artists, each of them decided to go on a different route. The first project focused more on the colors of the special BMW i8 CrossFade Edition, blending them with the bright lights inside the mall. Photographer Mihai Baloianu said about this venture that “Some things happen only once in a lifetime. The chance to photograph a car so rare, with only 10 being produced worldwide, is one of these things. The location was an invitation for a totally different creative process compared with a normal photo shoot. I believe that this project will spur the imagination of the viewers and they will discover the car in much more detail.”

As for Mihai Dascalescu, he took a different approach, wanting to express his take on the shapes of the BMW i8 through stopmotion, putting together a couple of gifs emphasizing the way people view the i8. “The most beautiful people are, isn’t it, the ones that are free to be themselves. They seem to be different than the others. The BMW i8 project is exactly the same – it does things differently all the while assuming the risk of “being different”. But if this car represents the future, the future looks good. And then, how often do you see a “highly superior” design levitating in a shopping gallery? I don’t know what is more fascinating – a spectacular BMW strolling through a Bucharest Mall, or the glances that it captivates”.

Ciprian Mihai, another one of the visual artists involved in the project also spoke highly of the BMW i8 and the project he was invited to take part in. According to him “the BMW i8 is a design and technology exercise with an amazing result. For me, as a photographer, it comes with a series of shapes and reflections that are so different than any other car in its class. For my BMW i8 photo shoot my concept was to use inanimate objects to give life to my work. Each photography was realized with double exposure, with the car and with different shopping windows.”

Last but not least, Dragos Sabadac decided to skip taking photos and go for a video instead: “The idea of shooting a car in such an unconventional space came as a challenge but also as a great opportunity to explore and feel its shapes trough my camera lens. The shopping mall offers unique perspectives in terms of imagery, but I see this visual exercise more like a metaphor to the boundaries these cars continue to push. The BMW i8 feels more than a vehicle. This experience transports you beyond what mobility usually stands for. It is surprising from every perspective. From shape, to function and functionality. We’re hoping that this will be the beautiful beginning of a new chapter in automotive history.” All the photos and videos are posted below for your viewing pleasure. 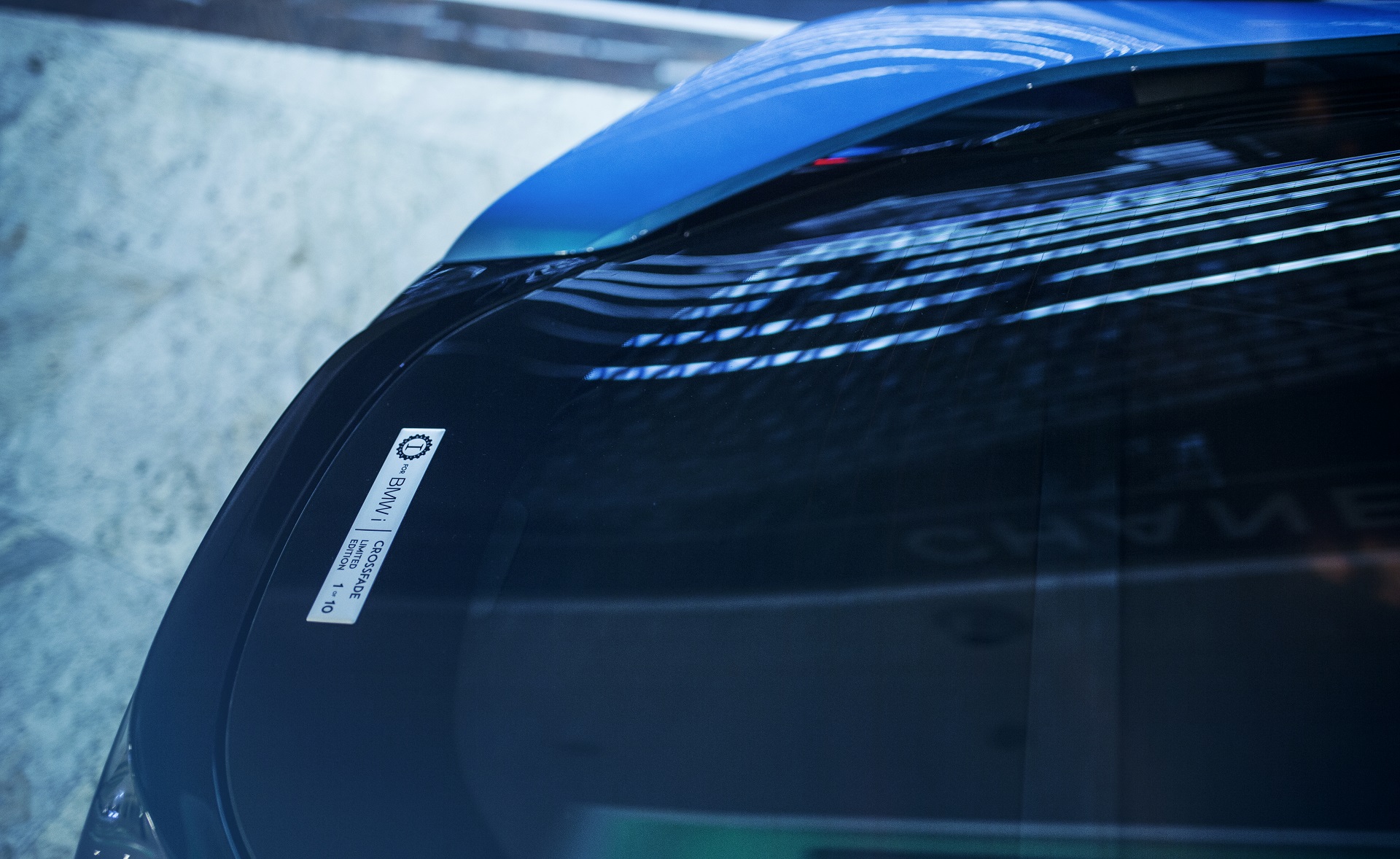 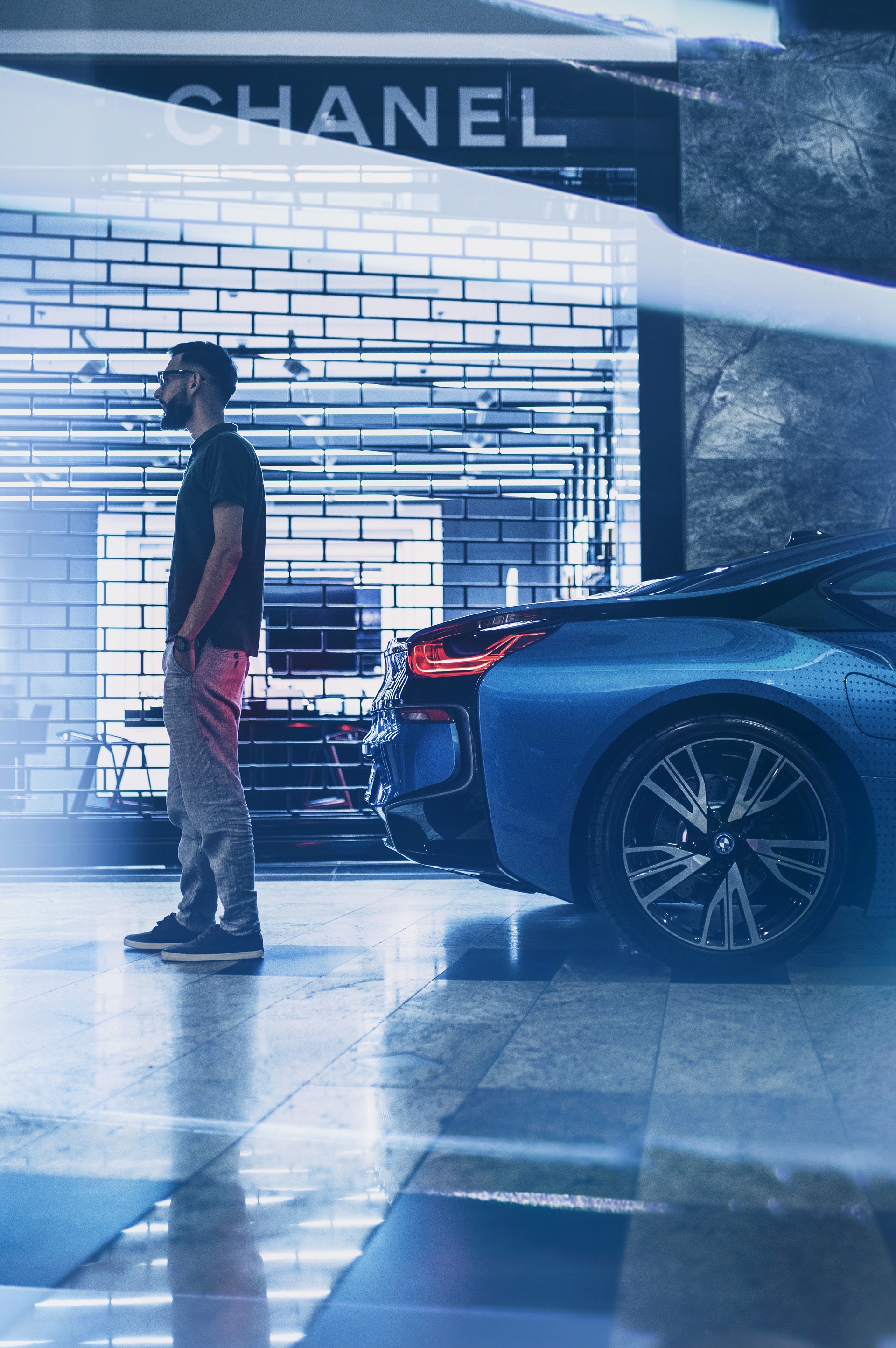 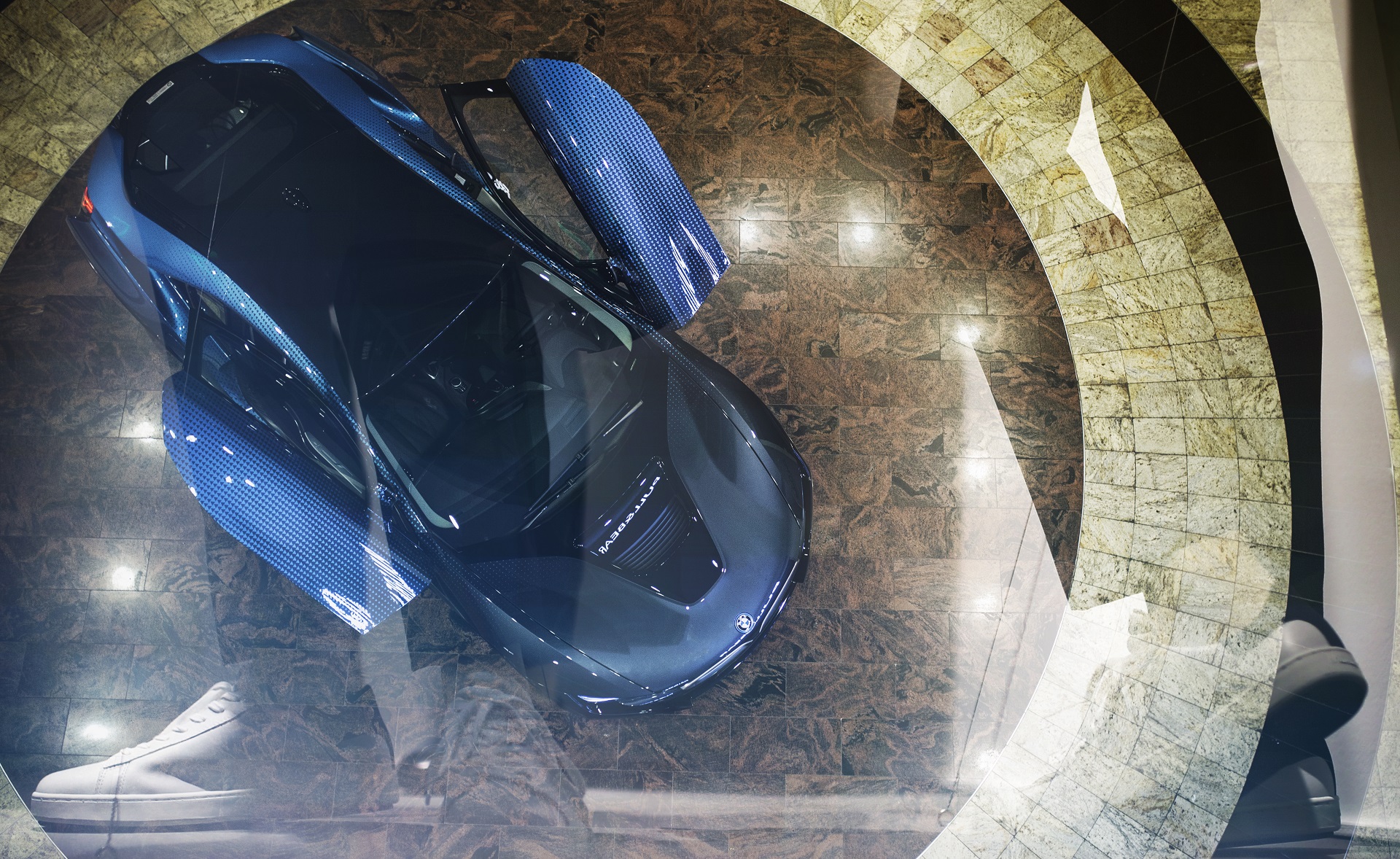 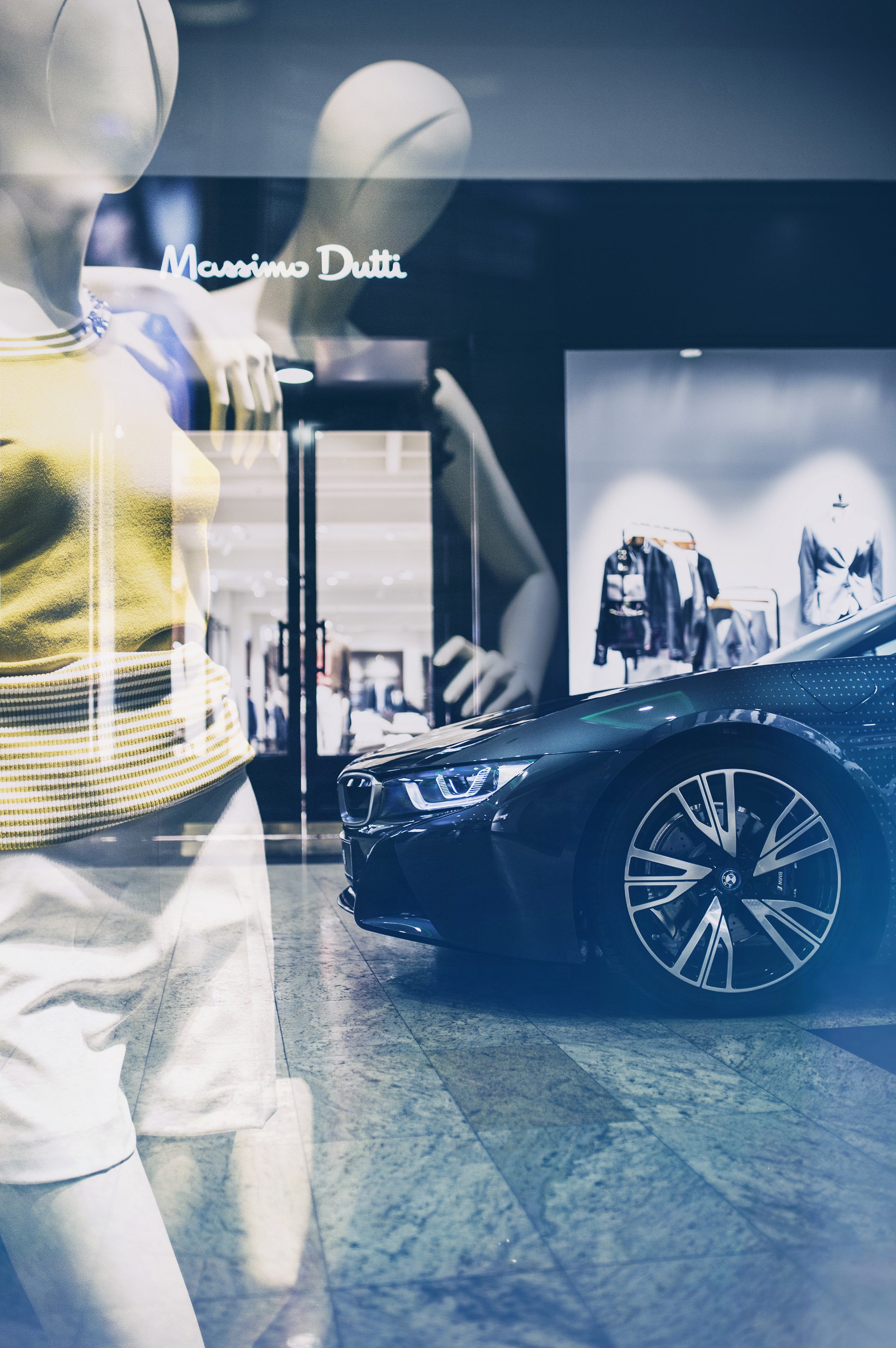 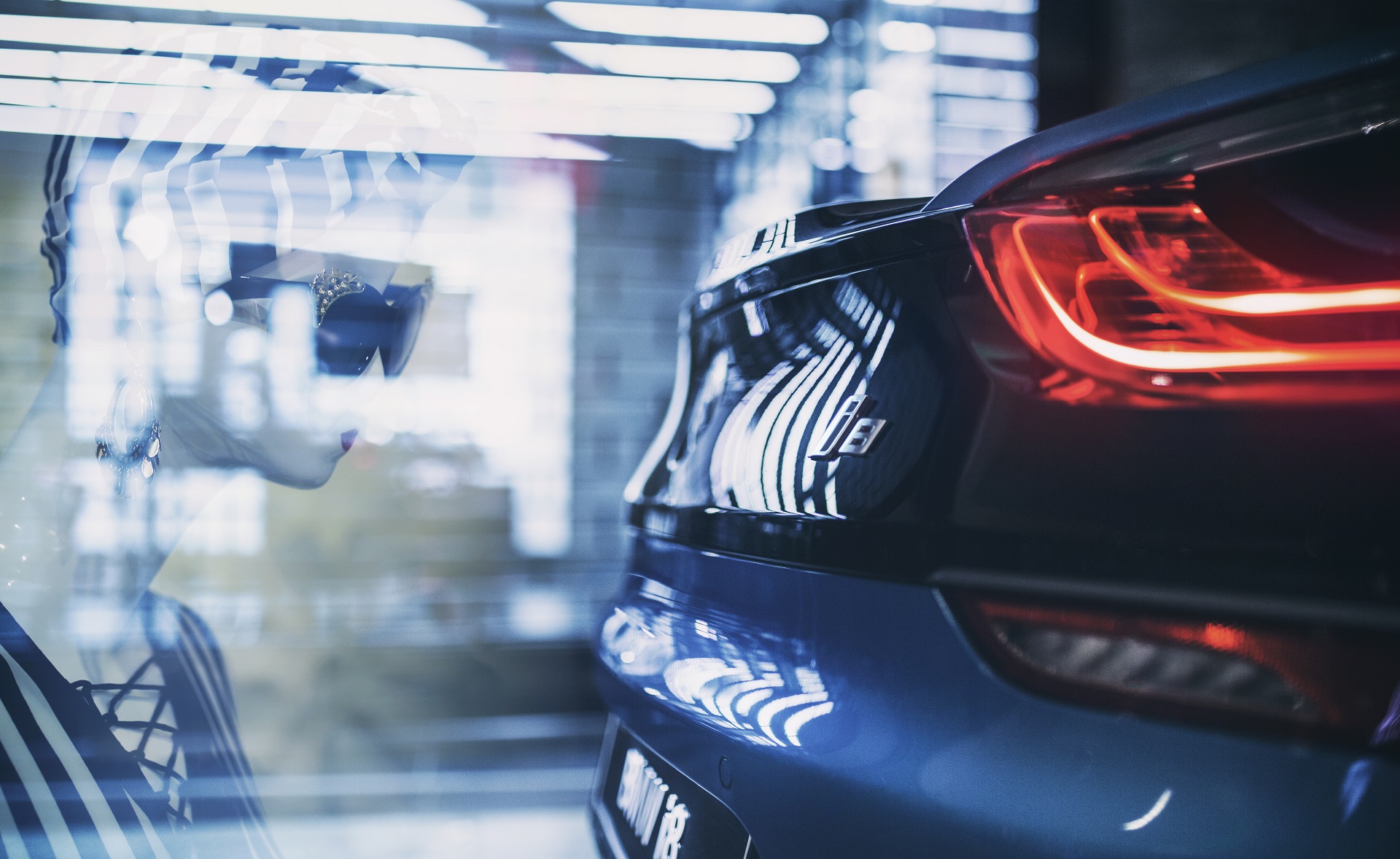 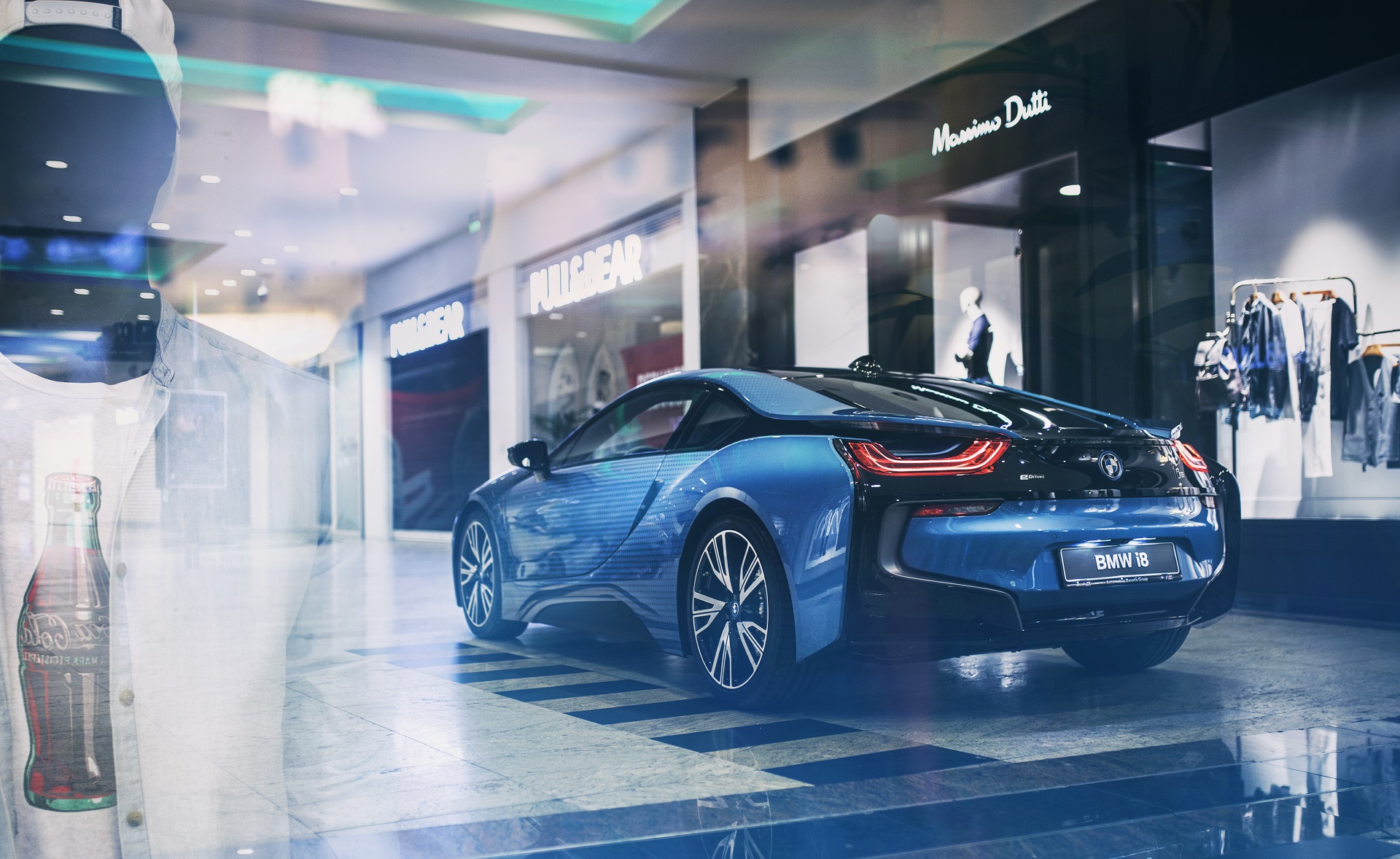 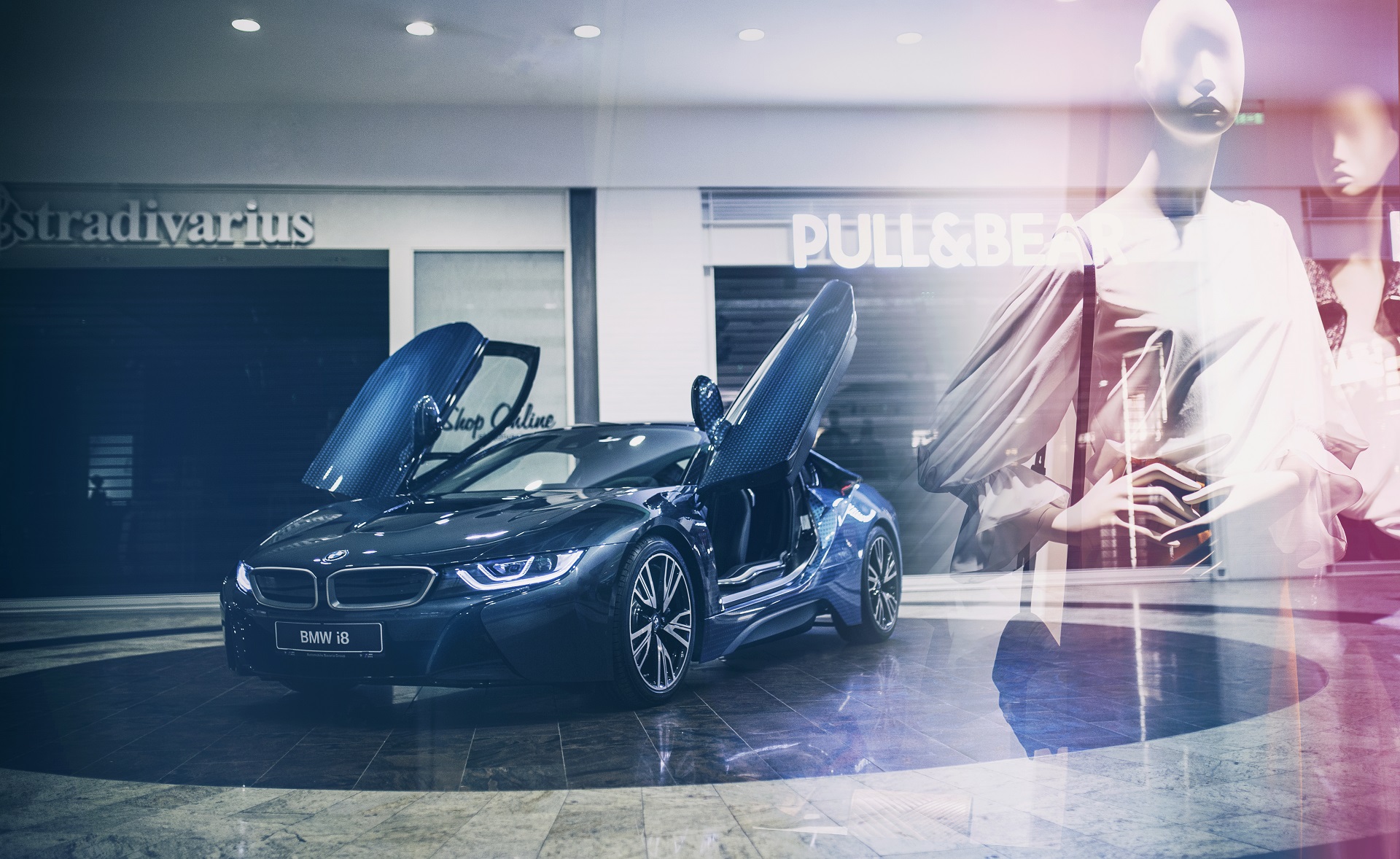 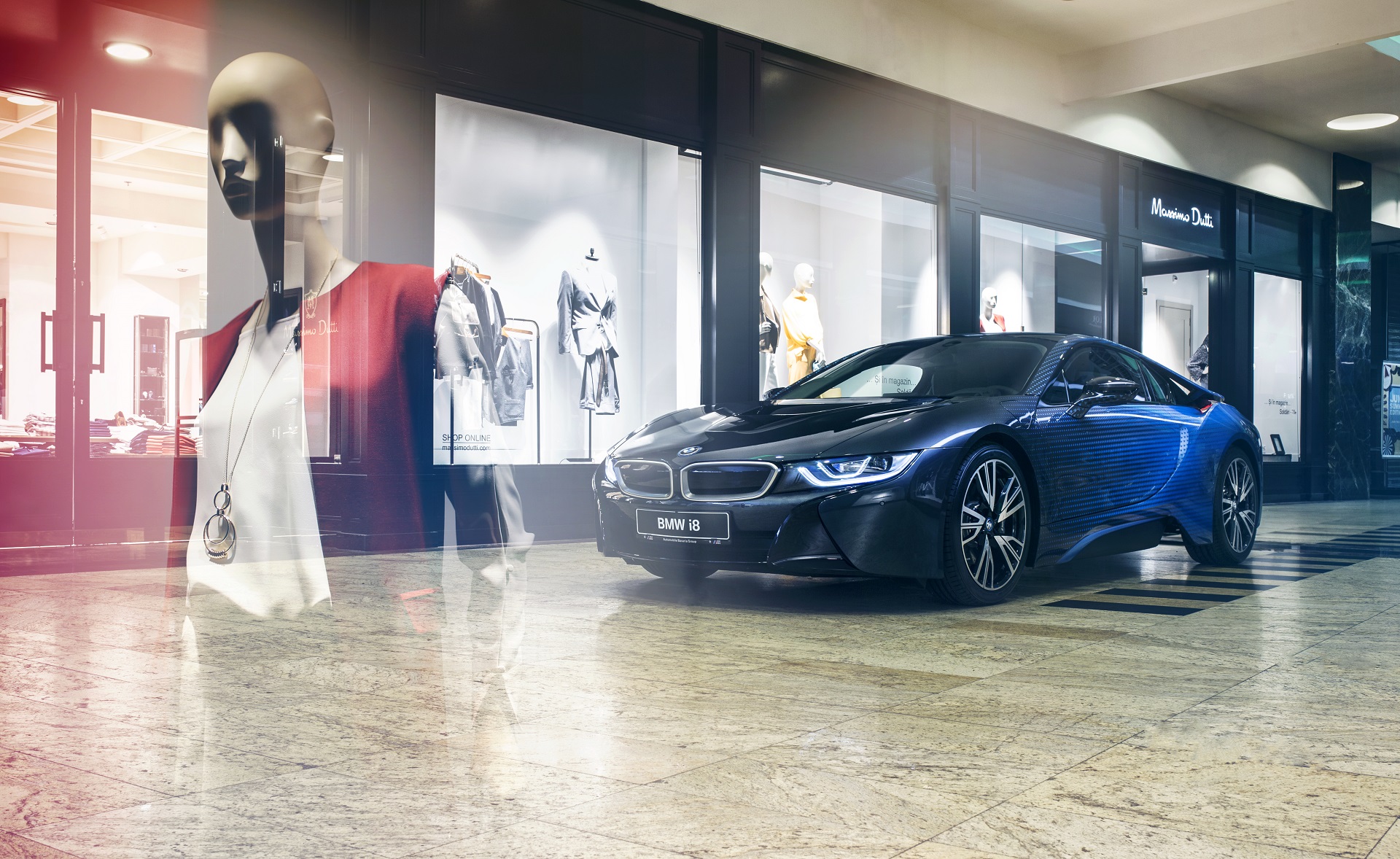 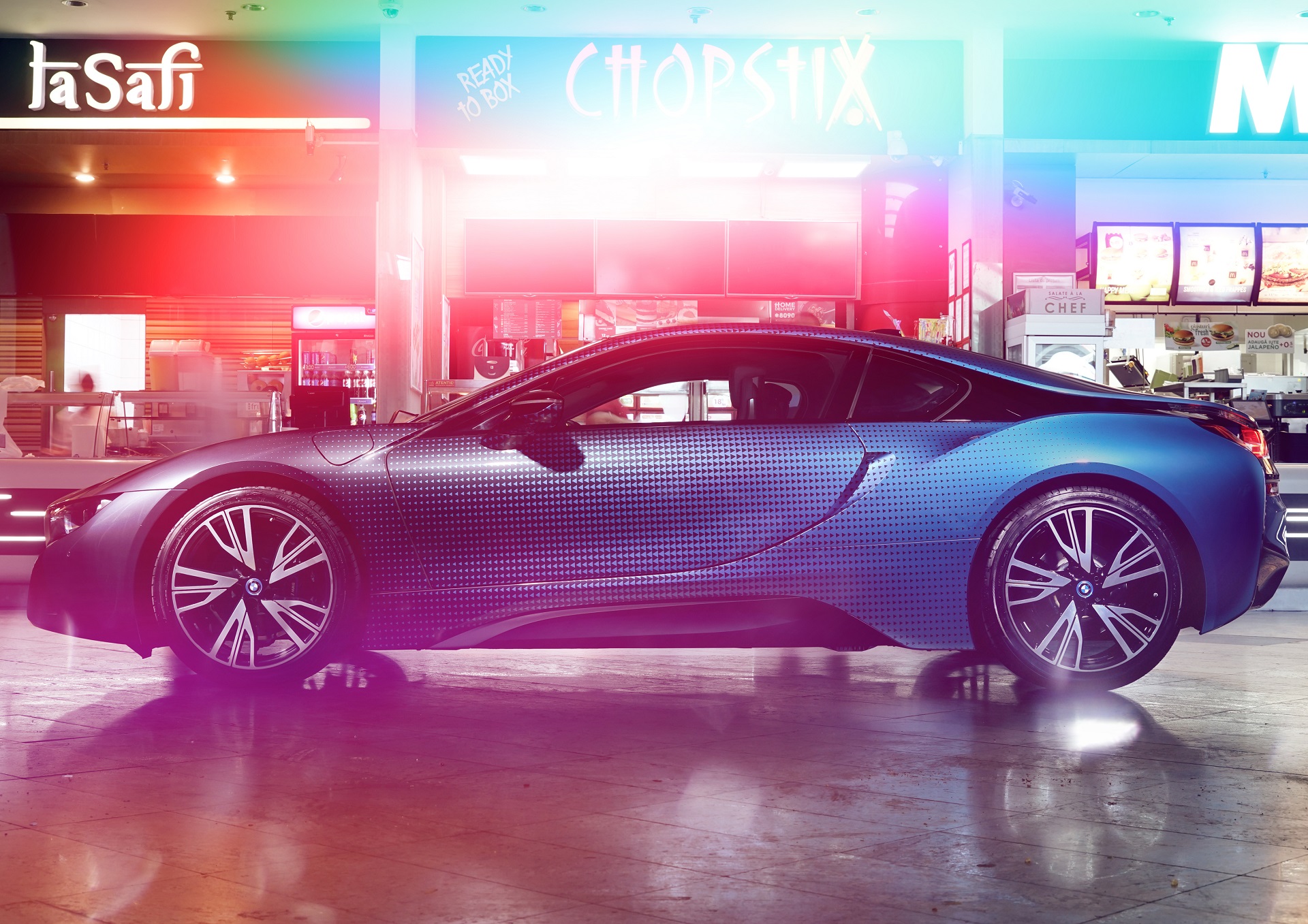 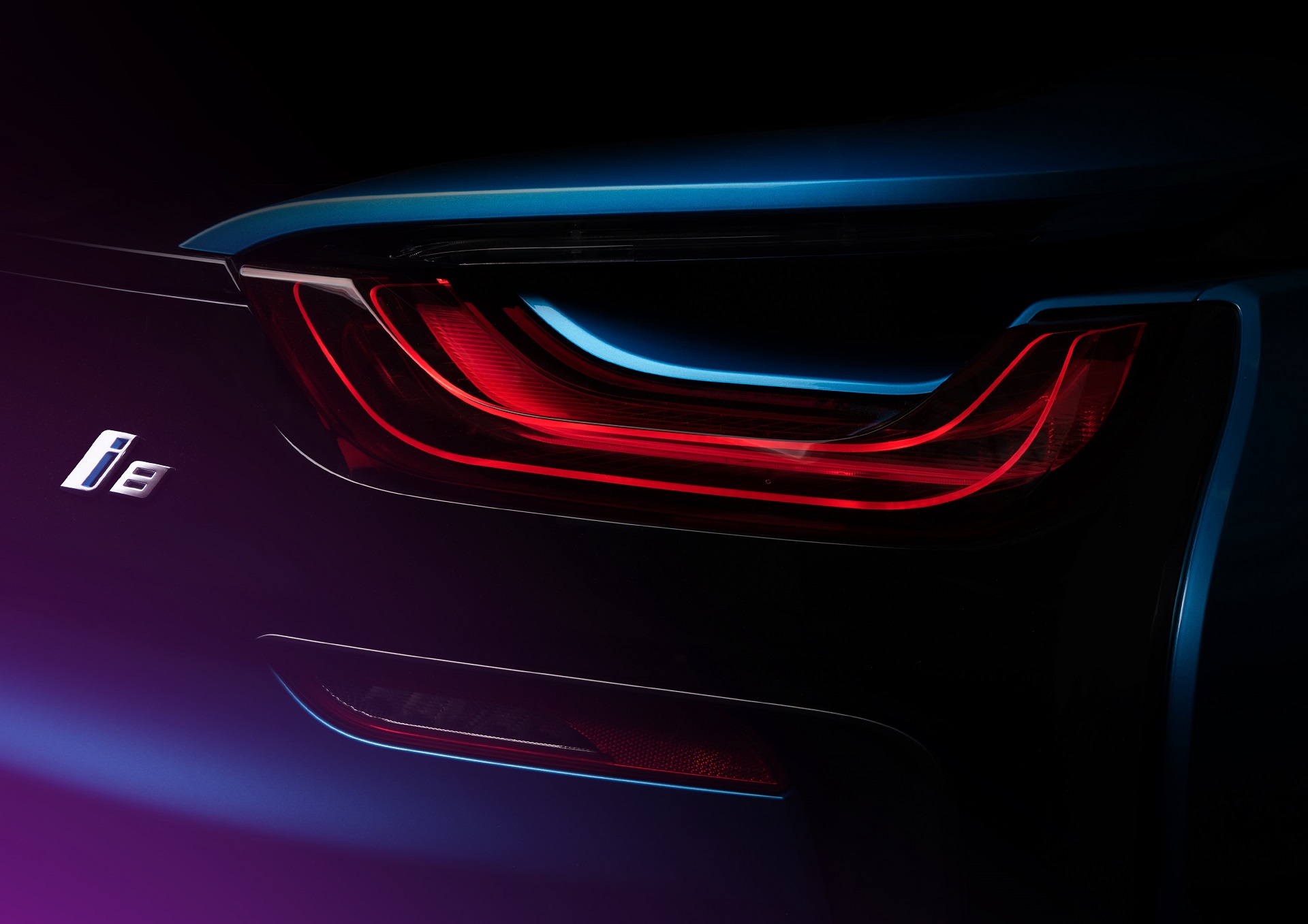 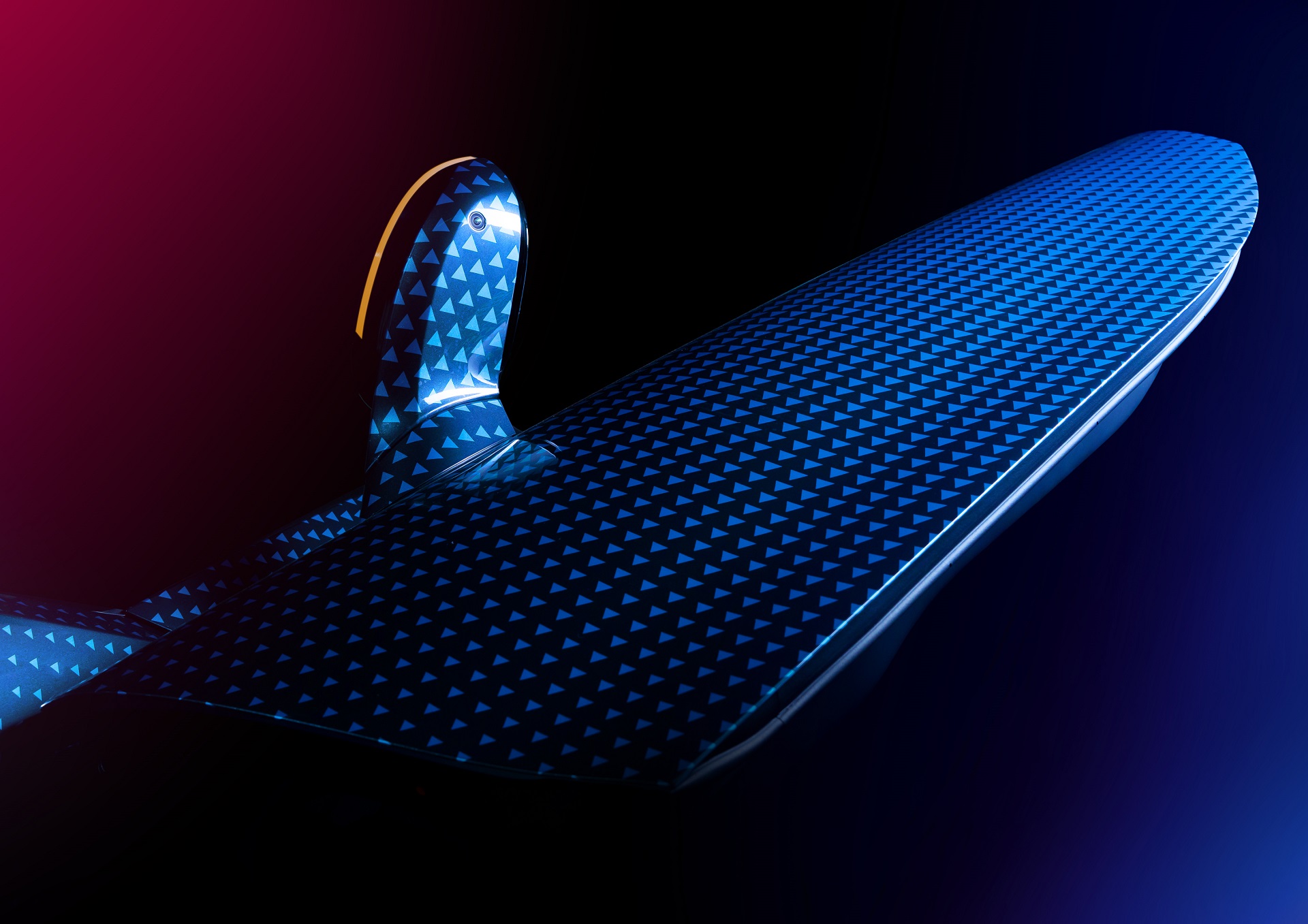