What do you buy if cars like the BMW M4 GTS or Porsche 911 GT3 aren’t enough crazy for you? Well, apparently Jaguar has the answer. The British brand didn’t want to let Zee Germans have all the fun by taking seemingly normal road cars and turning them into track monsters. So, from that desire to one-up said Germans, the Jaguar XE SV Project 8 was born. And it’s about 10 different shades of crazy. I love it.

The Jaguar XE SV Project 8 has more in common with the BMW M4 GTS than anything else. Both are based on pedestrian-level sports cars from each brand and both feature insane aerodynamics, as well as extreme exclusivity. So how exactly does the XE SV Project 8 stack up to Bavaria’s craziest car?

Under the hood lies a variant of Jaguar’s 5.0 liter supercharged V8. Except, for Project 8-duty, it makes a monstrous 591 hp. That’s almost 100 more than the M4 GTS and, remember, the XE is Jaguar’s smallest car. So that’s pretty remarkable. That monstrous V8 is paired with the brand’s ZF-sourced eight-speed “Quickshift” automatic gearbox and sends power to all four wheels. The gearbox can be kept in automatic mode or shifted manually, via either the steering wheel-mounted paddles or a new gear lever, that replaces the standard XE’s rotary dial. After factoring in the significant weight loss over the standard car and added aerodynamics, the Jaguar XE SV Project 8 can get from 0-60 mph in just 3.3 seconds. That makes it faster than the M4 GTS.

Speaking of weigh loss, Jaguar shed weight from its Project 8 in a similar fashion to BMW’s M4 GTS. The hood, front bumper, front aero (which is also manually-adjustable, like the GTS), rear bumper and rear wing (also adjustable) are all made from carbon fiber. It also gets 20″ forged aluminum wheels to reduce unsprung weight. If you want to take things even further, you can order it with lightweight bucket seats, with racing harnesses. Though, the cabin is still quite lovely, rather than the spartan M4 GTS. 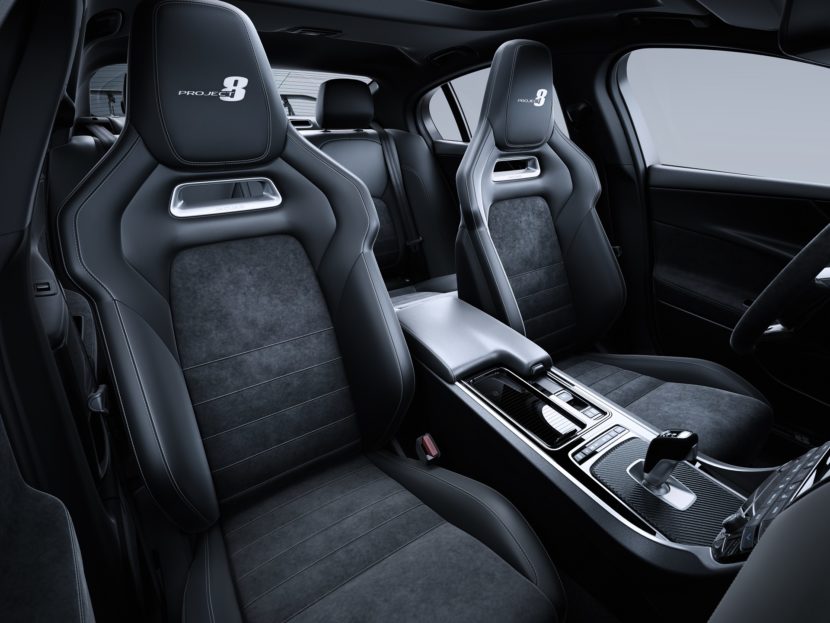 Jaguar also gave this car some clever handling and dynamic bits. Manually-adjustable, continuously variable dampers sit with new springs to lower the car 15 mm, while a Electronic Active Differential help put all of the power down. It also gets carbon ceramic brakes and Formula 1-style silicon nitride-ceramic wheel bearings, which is a road-car-first for the industry. So it should turn, stop and ride as well as it demolishes tarmac.

But the real reason to spend the £149,995 ($194,000) isn’t just to munch race tracks. It’s really just to enjoy this insane monster of a car. Just look at it. It’s a small sedan, that normally sports a tiny diesel engine, with a massive supercharged V8, manually-adjustable aerodynamics, a huge rear wing and enough room to fit kids in the back for a school run. There’s something so inherently desirable about it. Oh, and it sounds like fire and brimstone being forced through a nitroglycerin-powered wood chipper. Jaguar will only be making 300 examples of the XE SV Project 8, all of which will be hand assembled at Jag’s SVO facility in Coventry, England. I need one of them. 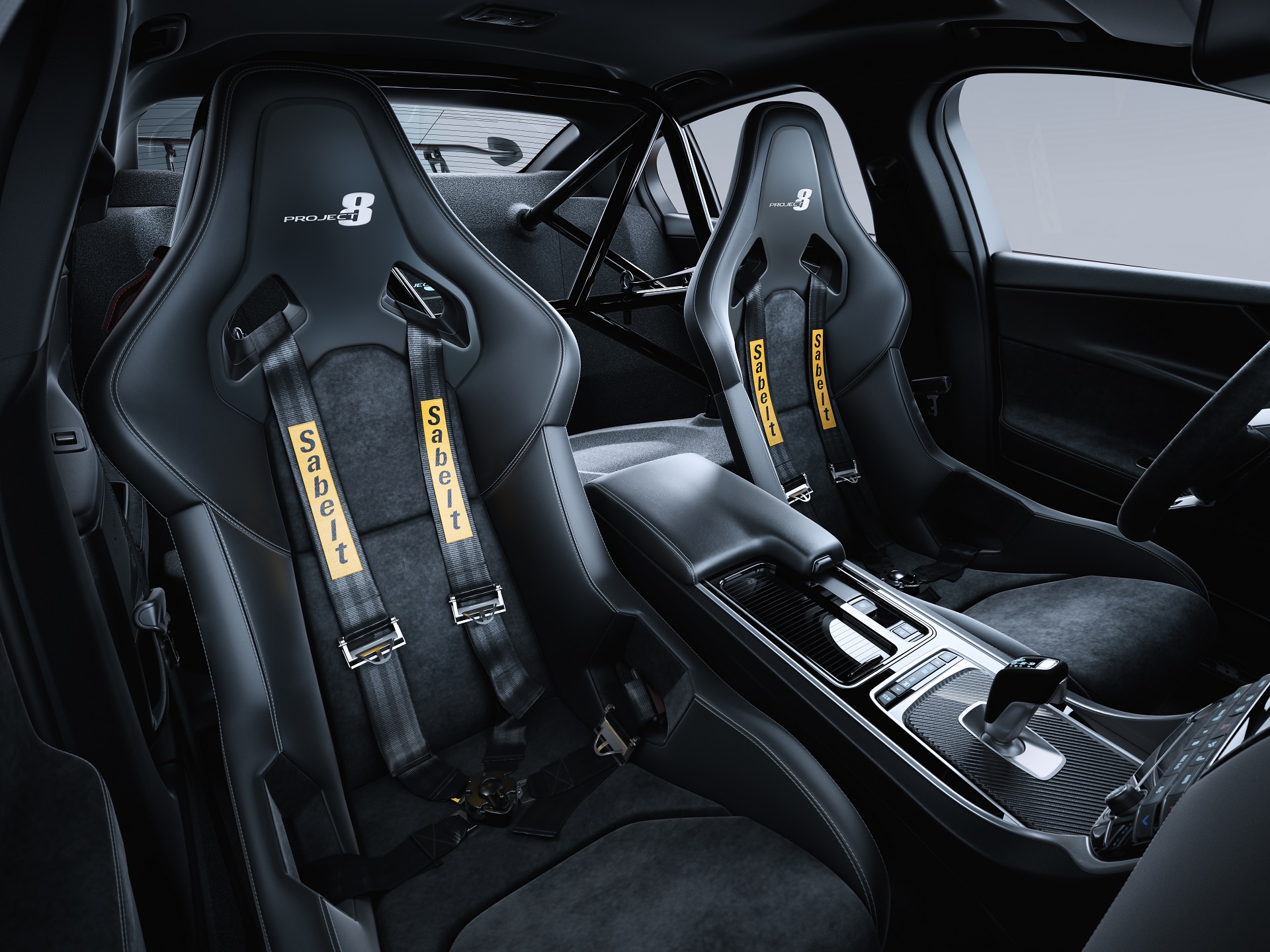 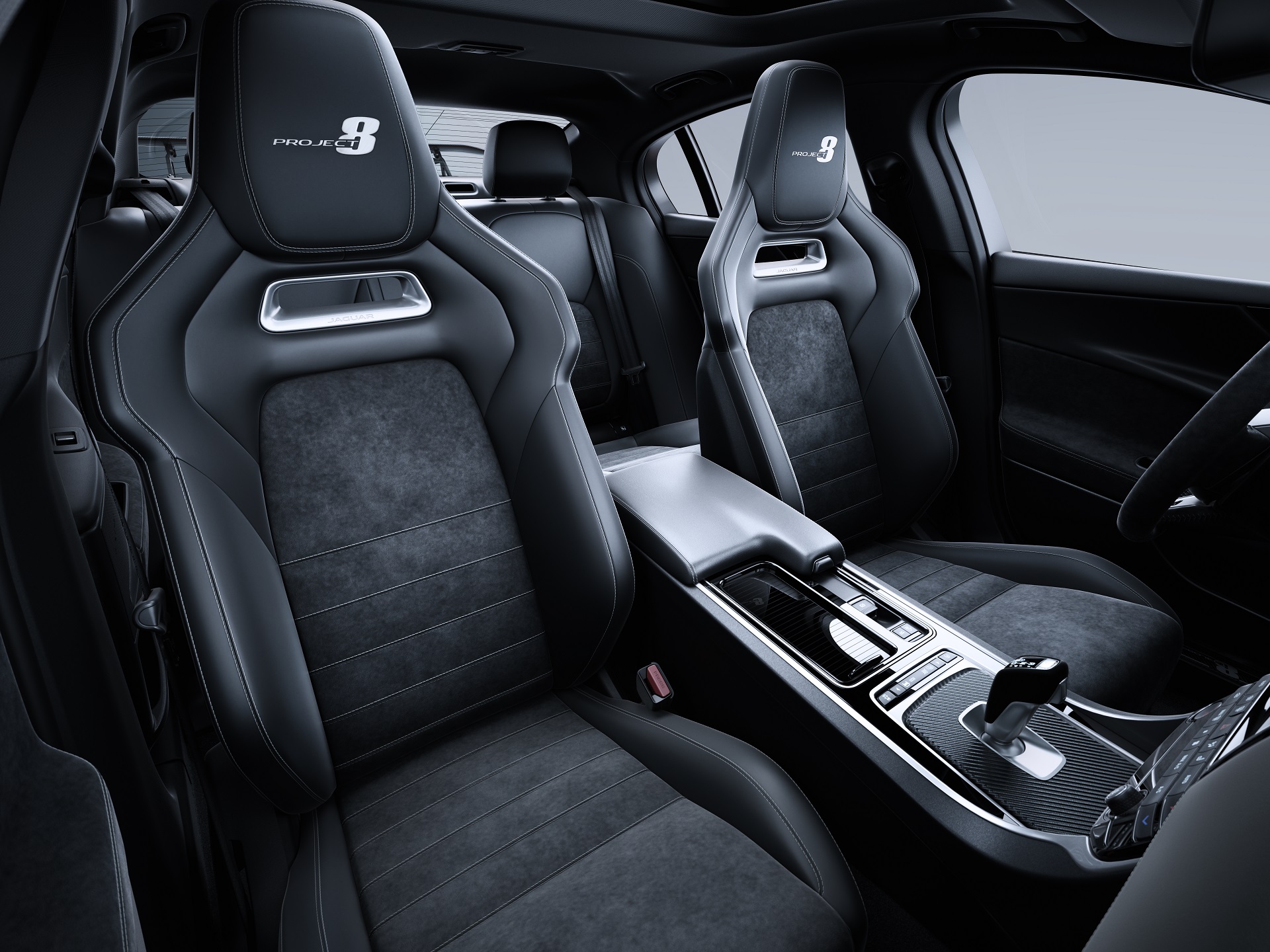