A couple of days ago, we posted some spy photos of some sort of BMW M2 wearing camouflage. While we weren’t positive, we had a good feeling that it was the future BMW M2 CS. Its fake front air intakes and camouflage on its front bumper and taillights gave away the fact that this could be a new model and not just a refresh. Also, it’s a bit too new for a refresh. However, there’s new evidence to such an M2 CS from Car Magazine.

In these new spy photos from Car Mag, the very same camouflaged M2 is driving around in some snow, doing a bit of cold weather testing. It’s wearing the same fake front air intakes and Car Magazine spotted something interesting about them. Or rather what’s behind them.

Car Mag spotted some of the cooling system behind the front spoiler that’s typically only seen on the BMW M3 and M4, thanks to their S55 engine. This would indicate the this M2 has the S55 engine, rather than its typical N55 engine. If that’s the case, then this is almost certainly the upcoming BMW M2 CS we’ve been hearing so much about. 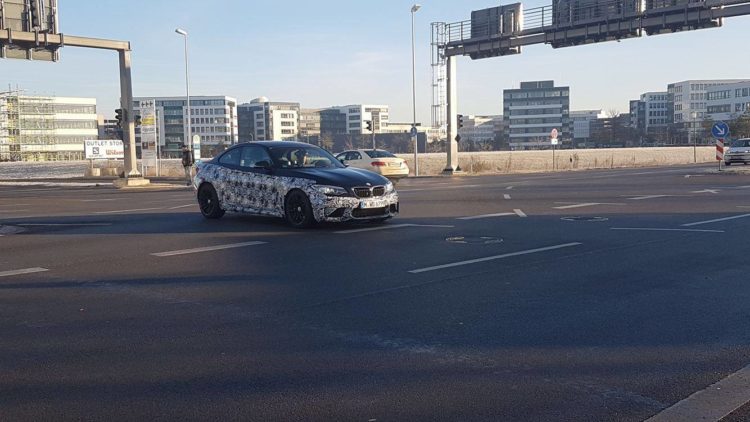 With the S55 engine, the BMW M2 will have well over 400 hp, though it’s yet to be known whether or not BMW will allow it to have more than the 425 hp of the standard M4/M4. According to Car Mag, it should have around 400 hp, undercutting the M3. If this is indeed the BMW M2 CS, it will also come with stiffer suspension, bigger brakes (possibly carbon ceramics that the standard M2 doesn’t get) and a more stripped out interior.

With more power, even less weight and the same small package, the BMW M2 CS should be one of the most exciting cars BMW has put since the E46 M3 CSL. While we won’t go crowning it the next M3 CSL just yet, it certainly could have the recipe to be the best car since.