2018 Ford Mustang gets refresh as well, to take on 4 Series

Twenty years ago, if you were to compare a Mustang and a BMW, people would wrinkle their nose at you. The two brands just weren’t in the same hemisphere, as Ford made affordable sports cars and sedans for the common folk while BMW made posher sports cars and sedans for posher people. However, Ford has come decidedly upmarket with its cars, as of late, especially so with the Mustang. While it’s still significantly cheaper than the BMW 4 Series, the Mustang can be serisouly considered as a budget alternative to BMW’s slick coupe.

BMW recently updated its 4 Series, giving it new headlights, taillights, some new interior bits and a better handling suspension. While not a dramatic update, it’s enough to make an already good car just that little bit better. Ironically, Ford just updated its new Mustang as well and did a far more extensive job than BMW.

Whereas the 4 Series’ changes are the look-quick-and-you’ll-miss-them sort, the Mustang’s changes are drastic. The hood, headlights and front fascia are all pretty radically changed on the Mustang and do look better. Performance Pack models also get a rear wing, because ‘Merica, and it’s pretty cool in a it’s-childish-but-I-don’t-care sort of way.

Inside, the overall design remains pretty much the same, but it gets some better materials (which is serisouly needed), like the upper door panels and padded knee bolsters. Like the BMW 4 Series, Ford has given the Mustang a fully-digital gauge cluster, a 12-inch unit, though the Mustang’s is optional, while the 4 Series’ is standard. However, it also changes its look and design based on mode. 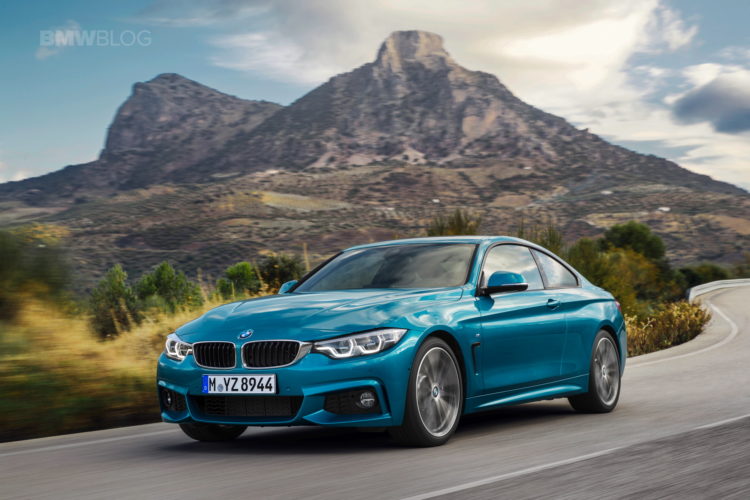 Where the Mustang’s and 4 Series’ refreshes differ most is in the mechanicals. While the 4 Series only gained some new suspension and steering revisions, the Mustang is quite different than its predecessor underneath the skin. Ford dropped the V6 model completely, so now the Mustang only comes with either a 2.3 liter Ecoboost or 5.0 liter V8. The latter is the obvious choice and starts life at around $35,000. That V8 has been heavily revised, with Ford claiming the only carryover part being the crankshaft. A new fuel system, both port and direct-injection, and a new quad exhaust help the new V8 rev higher than before, but Ford hasn’t released power figures yet.

Paired to said V8 is either a six-speed manual (the only true option for a Mustang) or a 10-speed automatic, which seems a bit like overkill. The six-speed manual gets the same clutch and dual-mass flywheel as the manual in the GT350, which is a gem of a gearbox. Performance Package-equipped Mustangs also get the magnetic dampers from the GT350.

So, right when BMW breathes some new life into its 4 Series, Ford hits the market with a refresh of its own sports coupe. While the Mustang and 4 Series aren’t traditionally compared cars, they do offer similar performance potential at similar price points. Yes, the 4 Series is more expensive, more premium and the more dynamic car. But the Mustang offers more power, more speed and more muscle at a cheaper price. Right when BMW updated its 4 Series, the affordable 4 Series-fighter just got better too.