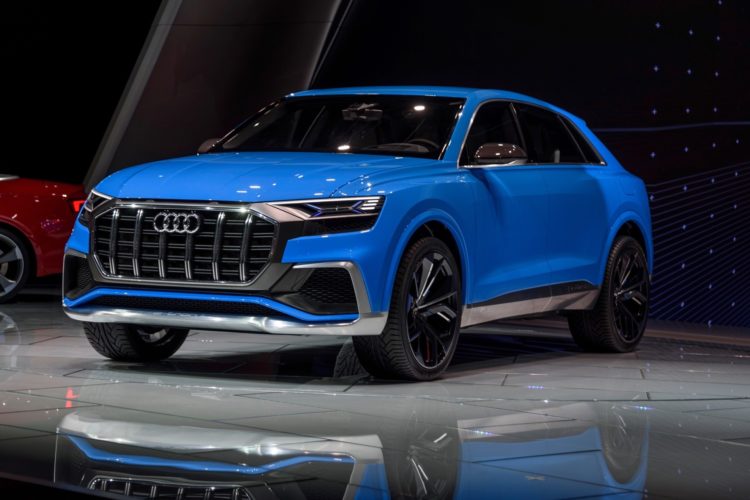 Debuting for the first time worldwide is the brand-new 2018 Audi Q8 Concept at the 2017 Detroit Auto Show. The Audi Q8 will be the brand’s flagship SUV once it finally makes its production debut, packing more luxury and technology than any other Audi vehicle. We’ve already seen a couple of teasers and some spy photos but this is the real thing now.

With a design that stems from the e-tron Quattro Concept, the Audi Q8 is clearly of the Marc Lichte design language, with the massively wide Singleframe grille and angular headlights. It’s also extremely aggressive looking, with its low-sloping, flat roofline and raked rear hatch. It also boasts a wide C-pillar, reminiscent of the original Audi Quattro, along with high-arching wheel arches. 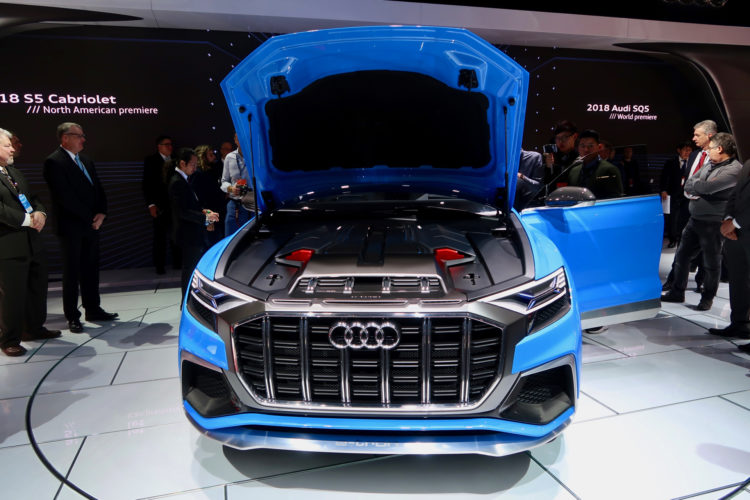 Up front, the massive grille features six accentuated vertical bars and the grille sort of blends into the angular headlights. The headlights themselves are completely unique in Audi’s lineup and features a sort of “X” shape design inside them. 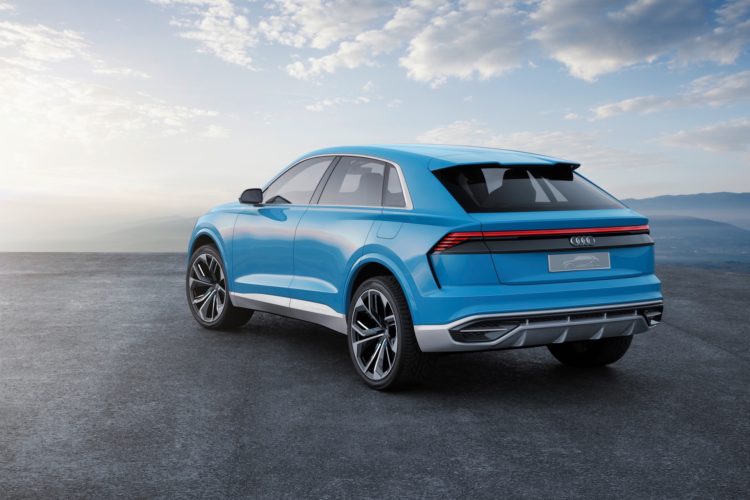 In profile, you can see the resemblance to the original Quattro, with its massive wheel arches, aggressive roofline and wide, flat C-pillar. It’s a handsome car overall and looks sportier than the other SUVs in Audi’s lineup.

Out back, you can see an OLED taillight that spans the entire width of the rear deck, expanding into the sides of the car. A rear diffuser adds a sporty look to the back of the car and is flanked by two massive rectangular exhaust tips. This gives off a powerful look, making the Q8 seem less like a hybrid and more like a performance SUV. The carbon fiber bits throughout the body, such as the wing mirrors and in the rear diffuser, also give it an air of sportiness. 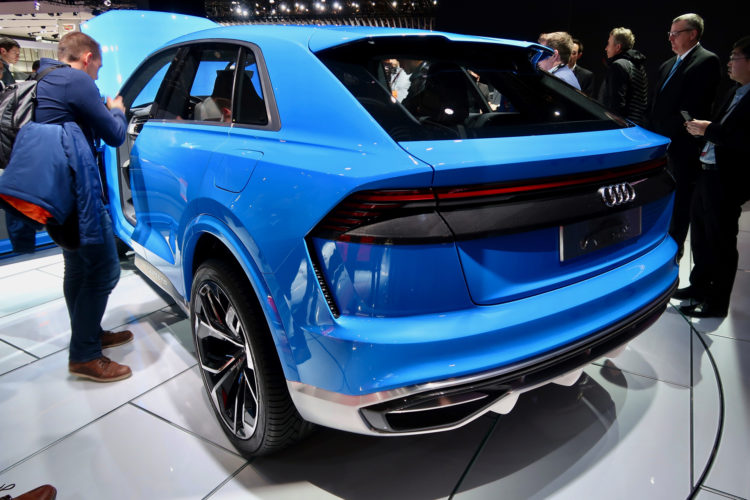 And sporty it is. The plug-in hybrid powertrain that will motivate the Audi Q8 will be comprised of a gasoline combustion engine and an electric motor. Said engine will develop 333 hp and 368 lb-ft of torque. Total system power, with the electric motor — powered by a 17.9 kWh battery — will be 442 hp and 516 lb-ft of torque. That will help get the Audi Q8 from 0-60 mph in 5.4 seconds, which is about Audi A5-quick. Not bad for a massively heavy hybrid SUV. 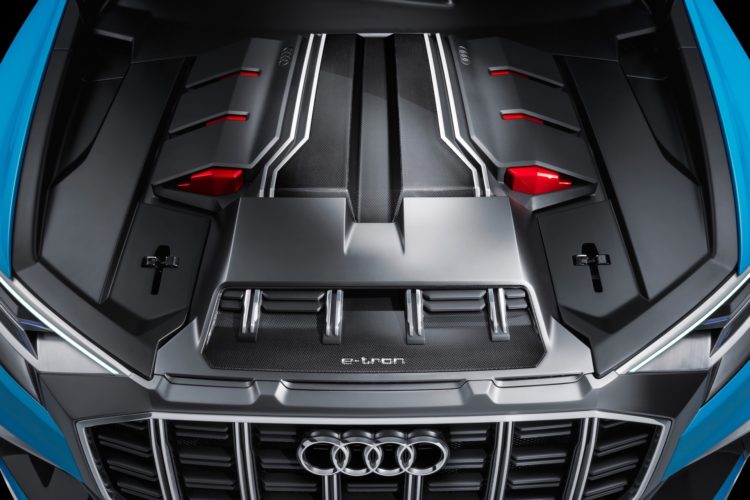 When powered by electricity alone, the Audi Q8 will be able to do around 37 miles, which isn’t far but it’s further than most other current plug-in hybrid SUVs.

Inside, the Audi Q8 is packed with impressive technology, featuring enough screens to make the Starship Enterprise look barren. The usual Audi Virtual Cockpit will be as-standard, alongside several other touchscreens that blend seamlessly into the dash and center console. With the screens surrounded by gloss-black plastic, they blend into their surroundings beautifully. Though, they do all seem like fingerprint magnets. 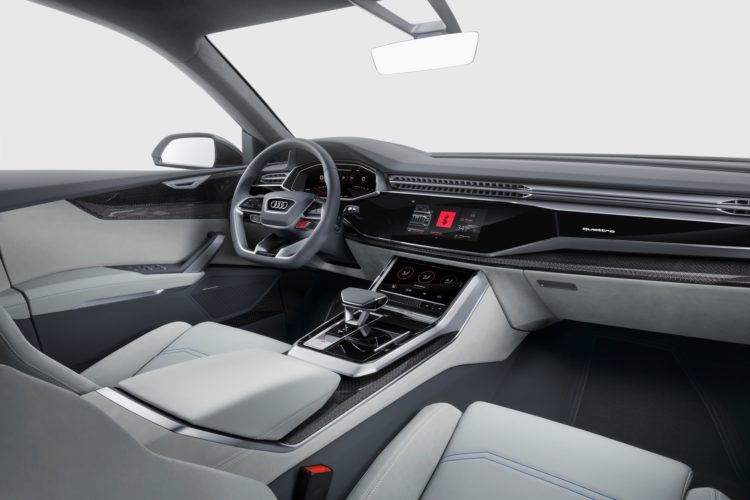 Essentially every control and button inside the Q8 is replaced with a touchscreen. So, just ahead of the shifter, a touchscreen controls all of the HVAC controls. Above that, another touchscreen houses the radio and infotainment controls. To the left of the steering wheel, there’s a touchscreen for all of the lighting controls. Even rear passengers get a touchscreen built into the center arm rest to control the back seat HVAC and seats. It’s all very sleek looking, but could get confusing while driving. We’ll see how well Audi implements all of these touch controls and if they’re more or less intuitive than the buttons and switches they replace. But, overall, it does look very good. 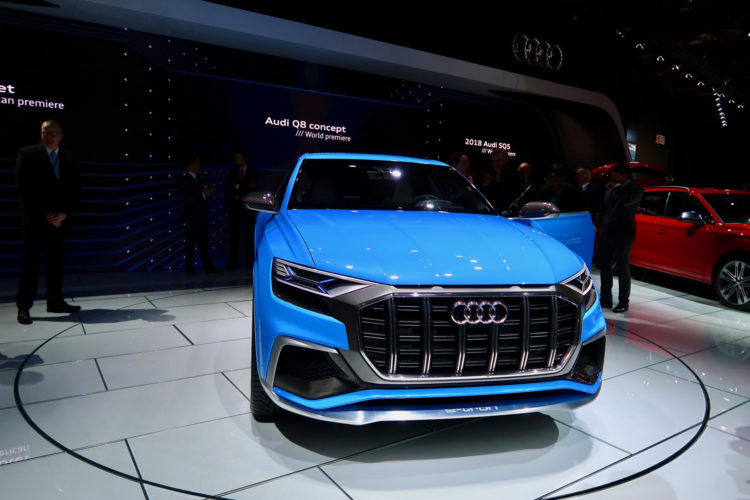 Wearing its Bombay Blue paintwork, the Audi Q8 is a stunning concept that’s hard to miss. It shows off advanced technology, great looks, an impressive interior and a high-performance plug-in hybrid drivetrain that boasts specs beyond any other hybrid SUV on the market.