After a long and tedious wait, the concept that previews the upcoming BMW X2 was finally unveiled in front of a live audience at the Paris Motor Show 2016. The small crossover is expected to be a coupe version of the already popular BMW X1 but by the looks of things, it will be a lot more than that. In terms of design, tradition and legacy are preserved while new elements are launched at the same time.

For example, the traditional X motif all of the other crossovers BMW is selling are sporting on the front fascia seems to be gone but on the other hand, the same front end does seem a bit wider than it is on the X1, mostly due to the big air intakes positioned to the sides. The kidney grilles have also been reinterpreted and feature a rather distinct shape with an upside down design. Chip in the fact that they’re not connected to the headlamps as we’ve seen on most of the more recent BMW models and it seems like the Germans really want the BMW X2 to have its own identity and not linger in the shadow of its more practical brother. 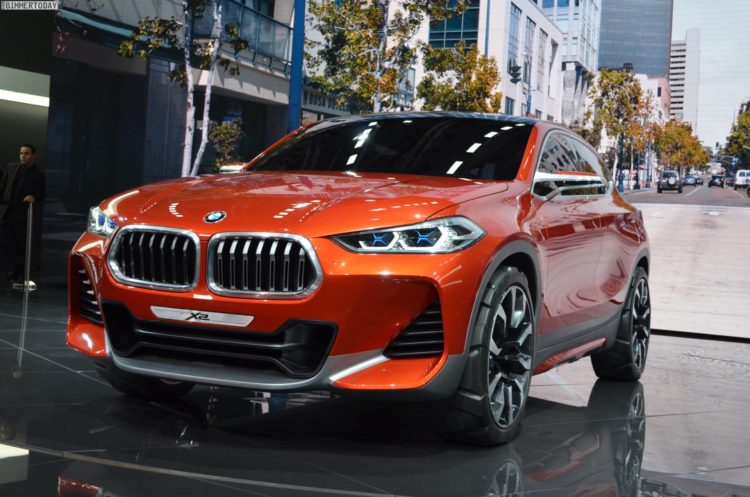 As far as traditional cues go, the Hoffmeister kink is still there and now sports a BMW roundel next to it, a hint at the old BMW Neue Klasse Coupe models that had a similar design. The BMW 2000 C and 2000 CS had a white and blue roundel next to their C-pillar Hoffmeister kink as well. Overall, the BMW X2 does seem like it’s going to be both a practical and a more stylish proposal compared to its X1 brother and that seems to have been the aim of the designers from the get go.

“The BMW Concept X2 is a vehicle for active people looking for a combination of enjoyment and practicality,” explains Adrian van Hooydonk, Senior Vice President BMW Group Design. “The concept displays a new and exciting facet of the BMW brand within the compact segment.”

As for the performance the car will bring you should expect the engine range to be made up of 1.5- and 2-liter mills shared both with the BMW X1 and the MINI range as the X2 will also be built atop the UKL platform. Yes, that means it will be front-wheel drive at its core but it will also be available with all-wheel drive, albeit one that will be FWD-biased.