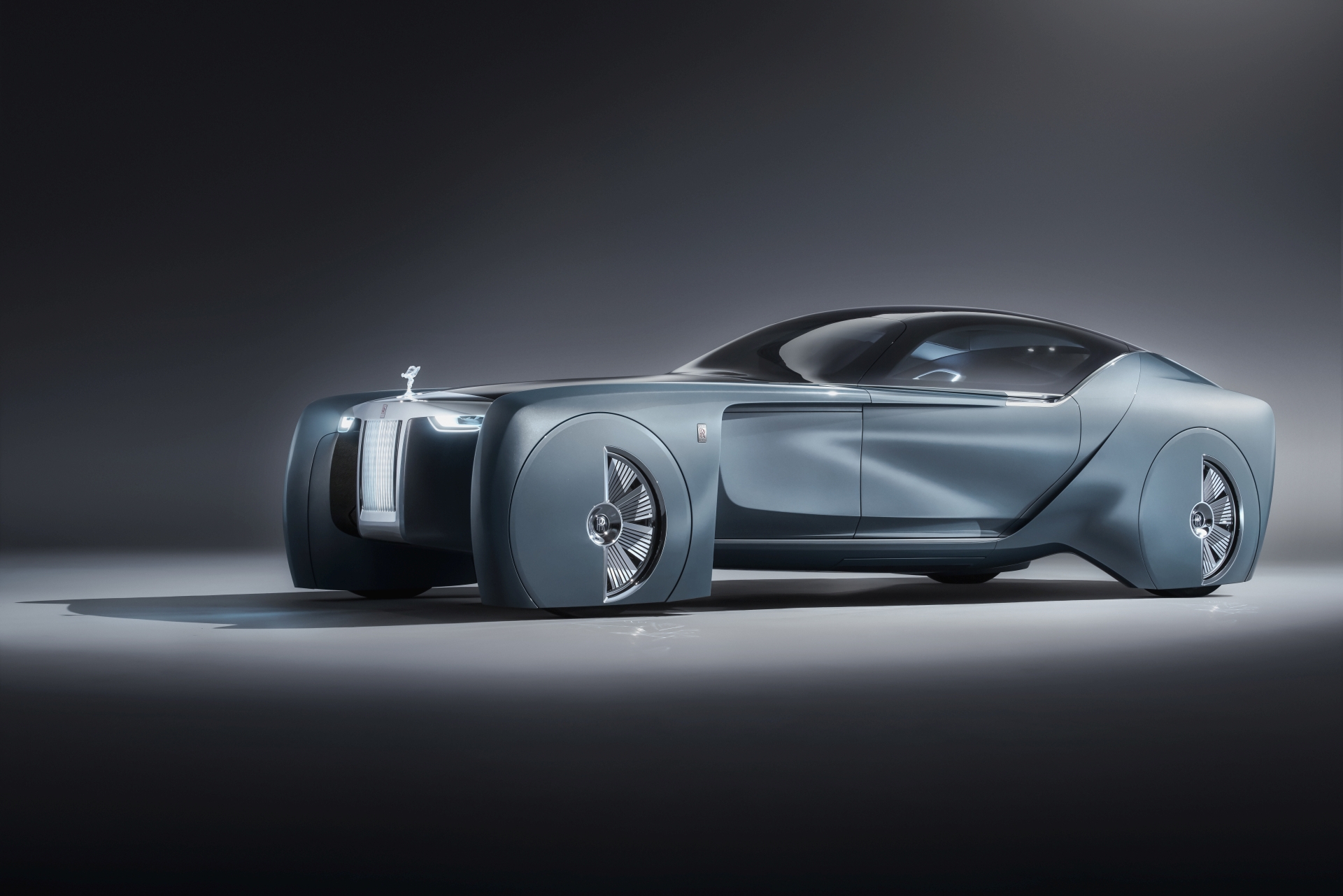 For the first time ever, Rolls Royce has released a ‘Vision Vehicle‘ Concept today in London and it is a look into the future of personal luxury mobility.

At London’s famous Roundhouse, Rolls Royce unveiled its new Vision NEXT 100 Concept, a car that will change the way we look at personal luxury in the future. The idea behind this Rolls Royce Vision NEXT 100 was to create a fully autonomous and electric vehicle that threw away the notions of being utilitarian. When most automakers and politicians talk about the future of the automobile, it’s always spoken of as a tool, something to get people from one point to another as seamlessly and effortlessly as possible. 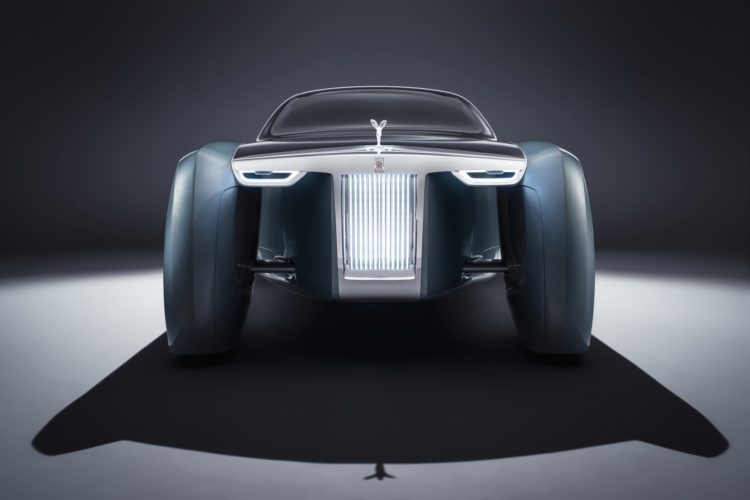 Well, Rolls Royce simply rejects such a notion and is showing us what the world of autonomous cars will look like when injected with the art of coachbuilding.

Rolls Royce has built this new concept on four tenets — The Personal Vision, The Effortless Journey, The Grand Sanctuary and The Grand Arrival. The four principles are the very foundation of this new Rolls Royce concept car and consume the car’s entire experience, from beginning to end. 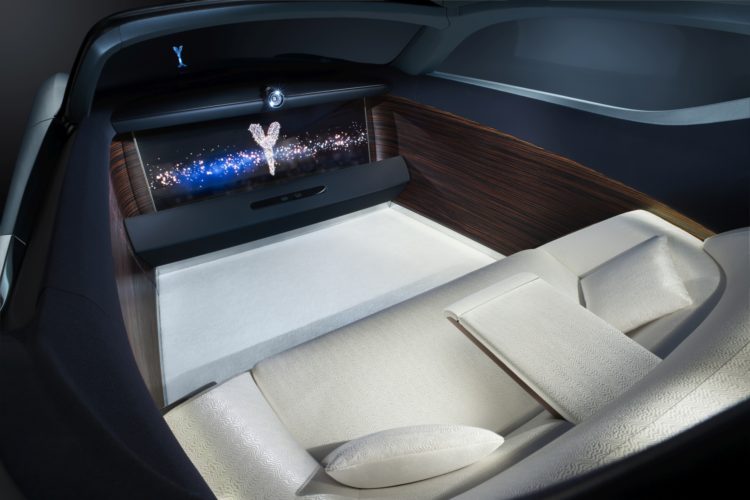 The Personal Vision is apparent from the moment eyes lock onto the stunning concept. The Rolls Royce Vision NEXT 100 clearly harkens back to the days of coachbuilt luxury cars and looks like what automakers from the 1930’s envision for the future. It’s still immediately recognizable as a Rolls Royce, but the styling is reminiscent of both old-school coachbuilt luxury cars and visions of the future. It’s a masterful blend of both new and old. And, in traditional coachbuilding style, Rolls Royce will allow customers to customize certain aspects of the car through advanced manufacturing techniques.

The car is 5.9 meters long and 1.9 meters high, matching the respective dimensions of the current Rolls Royce Phantom. So it’s as imposing as ever. Its F1-style exposed wheels connect to the “hull” of the car and allow it to seemingly float off of the ground. The long hood, which no longer houses and engine but and electric motor, allows for luggage to be stored through the side. The luggage door automatically opens upon arrival and closes when the car is locked, to allow for the simplest ease of use. The large, upright grille remains present as does the Spirit of Ecstasy, which is now made from glass and illuminates as passengers arrive. 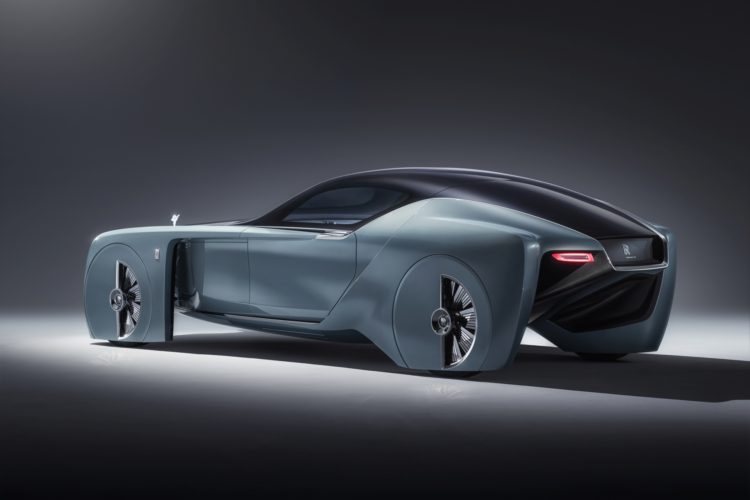 Once passengers step into the Rolls Royce Vision NEXT 100, they enter their Effortless Journey. Eleanor Thorton was an English Actress and Artist’s Model who was also the model behind the Spirit of Ecstasy for artist Charles Sykes. To honor her, the Rolls Royce Vision NEXT 100 will be guided and controlled by an artificial intelligence name Eleanor. Hopefully, Eleanor is more like Iron Man’s Jarvis than Discovery One’s HAL 9000.

Eleanor becomes the passenger’s personal assistant and chauffeur, not only autonomously piloting the car but reminding passenger’s of their daily itinerary and schedule. Eleanor can also bring the car around when owners are ready to depart and can also park itself, ridding the need for a valet. 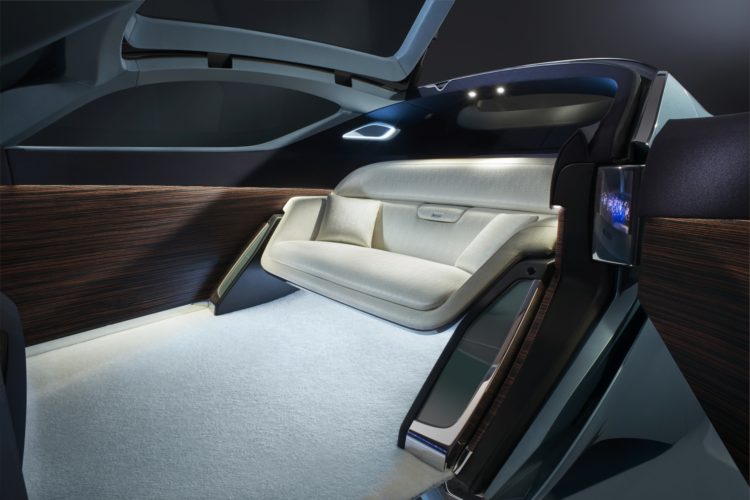 Rolls Royce’s signature “Magic Carpet Ride” style of comfort will remain, as it rides on incredibly advanced and sophisticated suspension that allows the car to almost skim over the road. An electric powertrain now replaces the hulking V12 of today and will allow for effortless and silent travel. If there was ever a luxury brand whose principles could actually improve because of electric propulsion, it’s Rolls Royce, as silent, effortless torque has always been the brand’s bread and butter.

Inside the Rolls Royce Vision 100 NEXT, occupants will find themselves in what Rolls Royce calls ‘The Grand Sanctuary’. Just stepping into this new Rolls Royce is an event, as the glass roof pops up as the door opens, to allow occupants to step into the car while standing up. This allows for graceful ingress and egress, the sort of grace that was given to people of class entering stagecoaches of a bygone era.

Inside, occupants will find a cabin like nothing else before it, with only a lone sofa, which has the effect of floating, available for seating all the way toward the back of the cabin. The sofa is made of the finest silk and wool, to create one of the most luxurious seating surfaces to ever be placed in an automobile. In front of the seated occupants is…nothing really. No steering wheel, no user interface, no center console. Only a massive OLED screen and a clock. Handcrafted fine-line Macassar wood circles the entire cabin, in true Rolls Royce nature. There’s no need for the traditional automobile controls, as Eleanor controls the car for you and answers your every request. The cabin of this Rolls Royce concept is designed to be nothing but relaxing and luxurious and give its passengers a similar experience to those traveling in stagecoaches of years gone by. 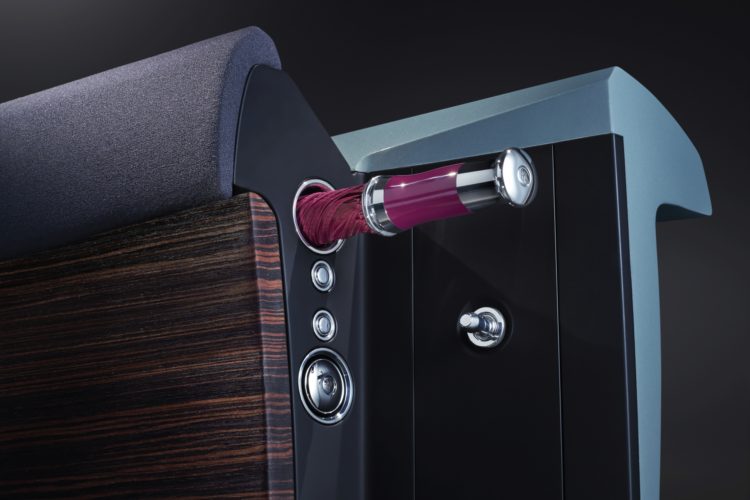 This new Rolls Royce Vision 100 NEXT concept wouldn’t be a proper Rolls if it didn’t offer its passengers an extravagant entrance to their destination, something Rolls Royce calls The Grand Arrival. Soon before arriving, the Rolls Royce will illuminate its Spirit of Ecstasy and Pantheon Grille to signal the vehicle’s arrival. As it does indeed arrive, that light will spread from the trailing edge of the front wheel arch to the rear of the single coach door, signalling that something momentous is about to happen. The glass roof canopy will then open, as will the doors, allowing passengers to again stand as they exit so as to do so in grace. Red light will shine from under the door, as a sort of red carpet for its passengers.

This new Rolls Royce Vision NEXT 100 Concept is truly one of the most magnificent concept cars we’ve seen in a very long time. It’s extravagant and glamorous and spectacular in ways only Rolls Royce can achieve. While most automakers envision a future of autonomous cars as simply utilitarian tools to navigate through the world, Rolls Royce rejects such an idea and envisions a future where personalization and luxury still have a prominent place in the future of the automobile. 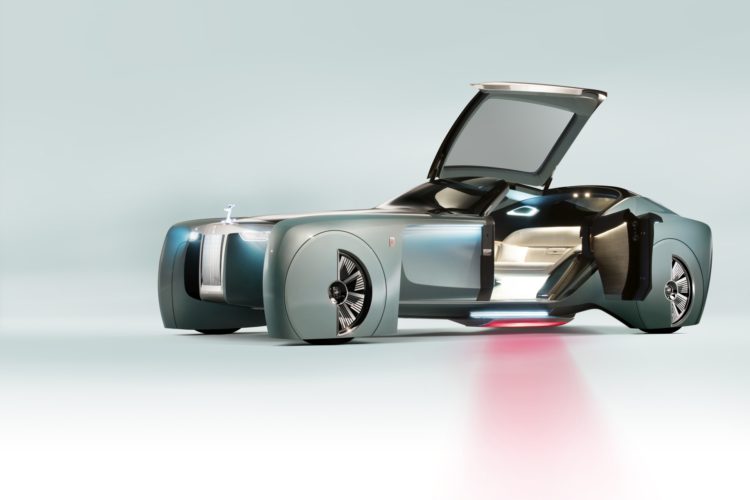 We applaud Rolls Royce for designing a car that works for the future but also can get our enthusiast taste buds watering. This new Rolls Royce Vision NEXT 100, with its stunning looks, incredibly luxurious and futuristic interior and extreme opulence and extravagance, is a refreshing view of the future, one that isn’t devoid of personalized automotive travel.