For the past decade or so, the Audi A3 Sportback and BMW 1 Series hatchback have duked it out for the title of best premium hatchback. They do things quite differently, with the BMW being rear-wheel drive and the Audi A3 Sportback being front-wheel drive with optional Quattro, they ultimately have the same goal to be luxurious, fun, practical and affordable. Up until now, they’ve been the best two premium hatchbacks on the market. But now there’s a newcomer that wants to challenge the two big Germans, the Infiniti Q30.

Infiniti has released its latest offering into the premium hatchback segment and it’s based on the Mercedes-Benz A Class hatch. So can Nissan’s up-market brand take on the Germans? Well that’s what Whatcar intended to find out. 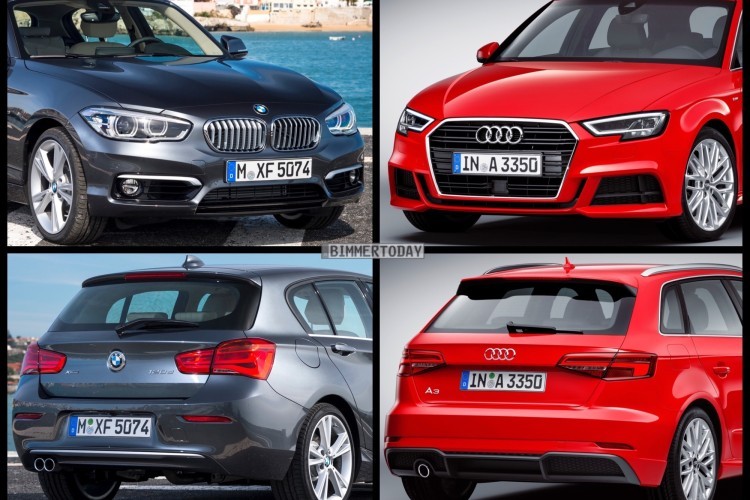 Well, it nails the recipe on paper, that’s for sure. It’s got five doors, a turbocharged four-cyldiner engine and a six-speed manual gearbox. The Audi A3 Sportback also uses a four-cylinder engine, has a six-speed manual and has five doors. The BMW 118i is the only one with a slightly different recipe. For starters, it’s the only one that is rear-wheel drive and it has a three-cylinder engine instead of the other four-bangers in the test. However, despite its lack of a cylinder, the BMW 118i is actually the most powerful car of the bunch, packing 134 hp versus the Audi’s 123 hp and the Infiniti’s 121 hp. Although, that extra power doesn’t actually help the BMW in terms of performance, as it’s the slowest car of the bunch to 60 mph, with a 0-60 time of 9.3 seconds, compared to the Infiniti’s 9.2 and the Audi’s 9 flat.

In terms of ride quality and handling, things are quite interesting. The Audi A3 Sportback in this test is wearing optional 18″ wheels and us running a sport suspension. So its ride is a bit firmer than the other two, but is the best damped and least upset by harsh pavement. The Infiniti is the softest of the bunch, but gets jiggly over rough roads. The BMW has a ride that’s somewhat in between the other two, but is the most upset by bumps in the road. When it comes to corners, the Audi A3 was deemed to be the best handling car of the bunch, surprising that the rear-drive Bimmer didn’t get that title. But the Bimmer placed in the middle in terms of handling, with the sloppy Infiniti being deemed the worst driving. We’re surprised to hear an Audi having better steering feel than a BMW. Audi’s always have direct and precise steering, but they’re typically lacking in steering feel, something that’s supposed to be BMW’s raison d’etre.

But the Infiniti Q30 isn’t off to a good start, as it’s suspension is jiggly and its handling is sloppy and it’s only mid-pack in terms of performance. So maybe it can make up some ground to the Germans with its interior. Unfortunately, it falls flat here, too. The aesthetics are nice and some of the Mercedes-Benz-borrowed switchgear feels high quality. But aside from that, the ergonomics are poor and the seats are bad. The BMW has a typical BMW interior that’s built well, is spot-on ergonomically and has great seats, but it lacks in design and style. The Audi A3 is said to have the best interior of the bunch, as it has good seats, great ergonomics and has the nicest styling.