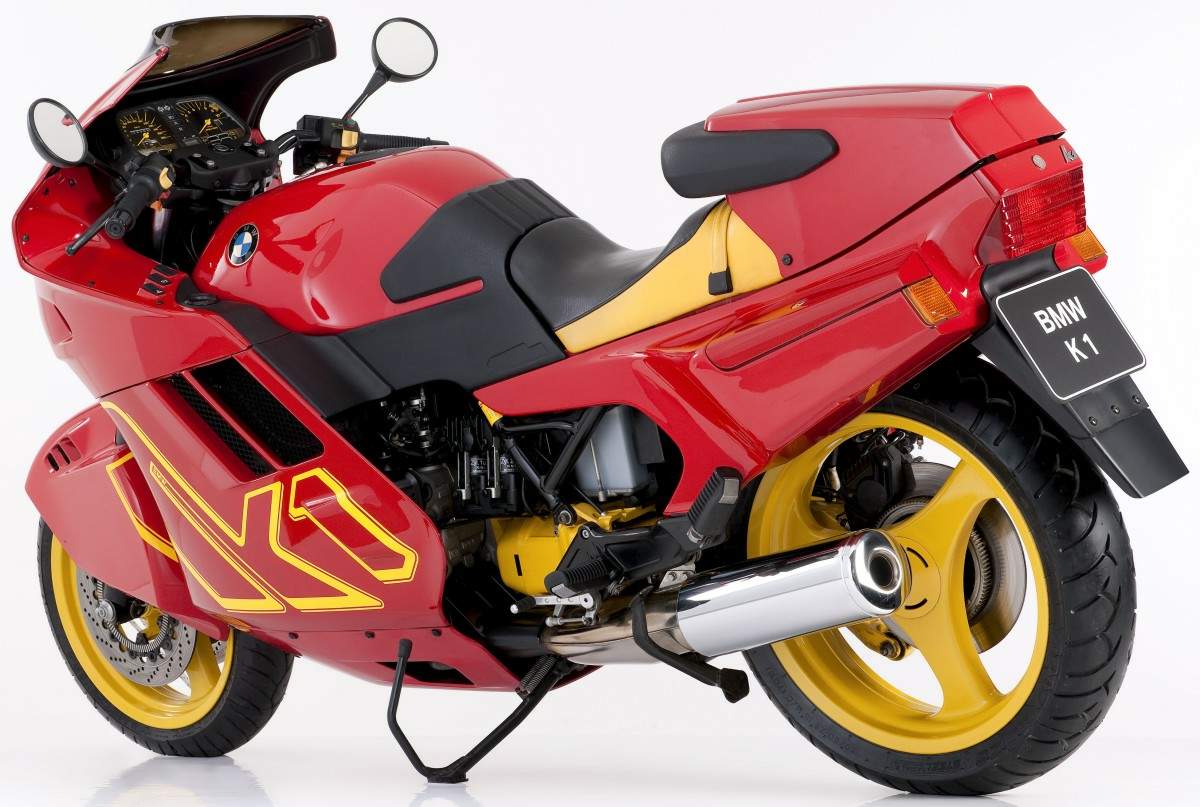 The BMW K1 was an aesthetically radical machine. This was quite purposeful, as the task of the K1 was to dramatically alter the way in which the BMW Motorrad brand was perceived. At the time, the brand was regarded as a producer of conservative touring machines. However, in 1988, the introduction of the K1 changed that forever.

The K1 was a highly exclusive and very distinctive motorcycle. Less than 7,000 examples were made during the 5 years that the K1 was produced. It adorned a full set of fairings, designed to reduce wind resistance as the bike travelled along at speeds of up to 150mph.

In fact, its aero efficiency was class leading at the time. As a consequence of the bike’s intended use, for transporting the rider at very high speeds, the K1 was quite heavy. The 500+ pound weight resulted in a riding dynamic which which was confidence inspiring on the autobahn. That being said, it wasn’t ideal for use at slow speeds as its weight then became rather burdensome, and the bike utilized a rather long chassis. Too, the bike’s fairings restricted heat from dissipating properly, which in some cases is said to have led to riders experiencing burns.

Though the 95hp output may seem rather laughable when compared to the K1’s relatively modern successor, the K 1300 S’ 175hp, it was no slouch in its day. Yet, by the time the K1 entered production, its speed and acceleration was rather comparable to offerings from other manufacturers. However, the K1 was a halo bike, the type of bike you’d have on a poster in your room as a young man, a machine which was a very aspirational product. Its price was fitting for a halo vehicle, starting at more than $12,000USD. In 1988, the median income was $24,450USD and the average price of a new car was just over $10,000USD, for context.

The K1 was an indispensable motorcycle for BMW Motorrad. The powerful Bavarian laid the groundwork for BMW to become a real contender in the premium sportbike segment at a later time by forever changing the way in which the brand was viewed. As a consequence, the K1 arguably set the stage upon which the wildly successful S 1000 RR was able to blossom. Sure, the K1 wasn’t devoid of its quirks, nor was it the fastest machine, but its uniqueness led it to become regarded as a true classic by enthusiasts and journalists alike.

As I mentioned earlier, the spiritual successor to the K1 that is offered today is the K 1300 S. The K 1300 S is nearing the end of its life cycle, as 2016 is slated to be the final year in which it will be made available. As we anxiously await the K 1300 S’ successor, and though decades have passed, we undoubtedly look back upon the K1 with great reverence.