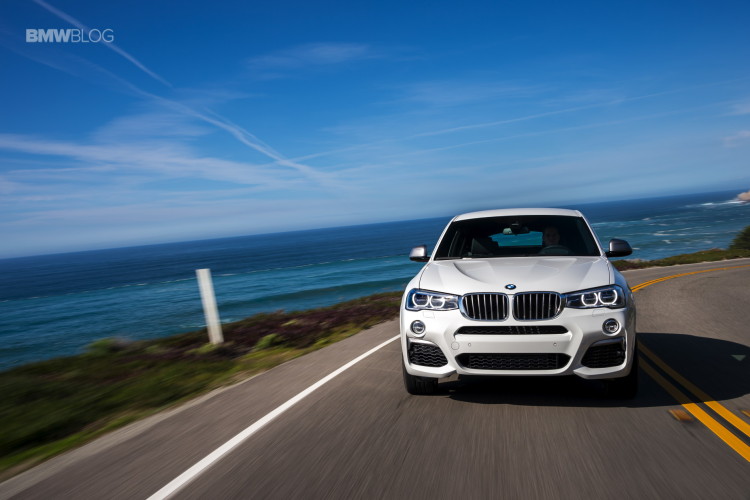 Enthusiasts are often skeptical when it comes to an M badge applied to an SUV and for the most part, BMW has yet to put the “Most Powerful Letter In The World” on their entire crossover family. But the newly formed division – M Performance Automobile – seems to have their own M plans for some of the new SUVs.

After witnessing a huge increase in demand for performance-based all-wheel drive cars, the MPA folks have quickly launched a revised version of the X5 M50d and the X6 M50i. Next on the list was the X4 which gets a new top-model – the BMW X4 M40i. The niche model was unveiled late last year and has now headed to Monterey, California to be driven by journalists from around the world on the beautiful and twisty roads around Carmel Valley and the Pacific Coast Highway. 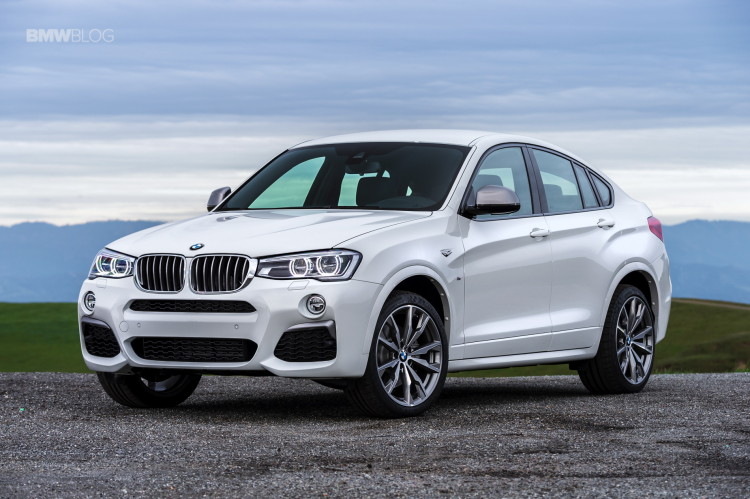 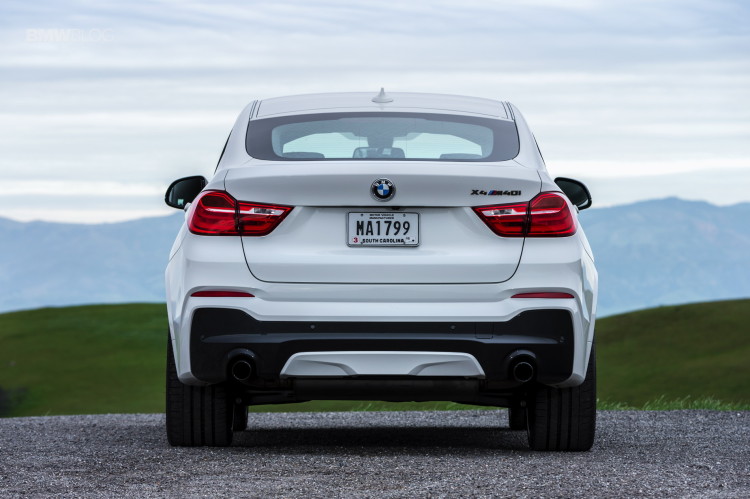 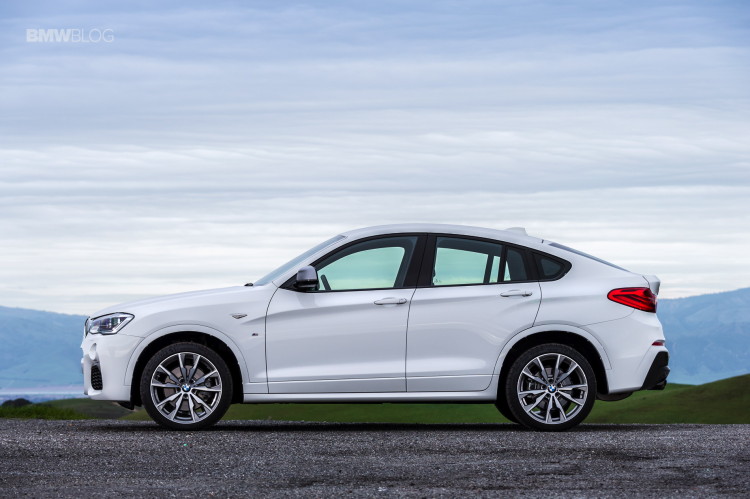 The BMW X4 was always an intriguing car to us as it’s sportier than the X3 – which already drives quite well – yet is still quite practical. So the X4 could be a very good Jack of all Trades type vehicle. It also looks good, handles well and was fast to begin with. We first sample the X4 xDrive35i in Bilbao, Spain and we came back impressed. So what more can the X4 bring to the table? A sportier suspension, a more powerful engine and better looks. But that’s just touching the surface…

SHARING ITS DNA WITH THE M2

New pistons featuring a new top ring design, additional boost pressure for the twin-scroll turbocharger, revised crankshaft bearings, a modified inlet manifold for improved breathing potential and a separate oil cooler, are just some of the goodies hidden underneath the engine cover.

BMW claims a best-in-class acceleration time of 4.9 seconds in the sprint to 62 mph which is blistering for an SUV like the X4 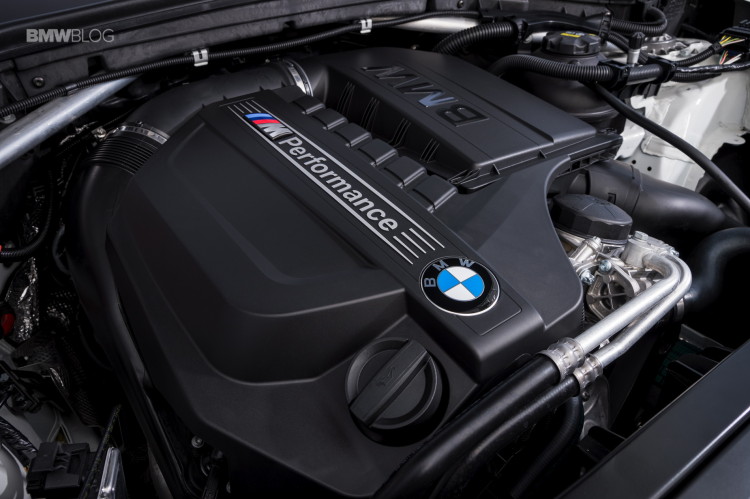 BMW claims a best-in-class acceleration time of 4.9 seconds in the sprint to 62 mph which is blistering for an SUV like the X4. So while it isn’t true M Division product, it sure goes like one. In comparison, the X4 xDrive35i runs from standstill to the standard 62 mph in 5.5 seconds. 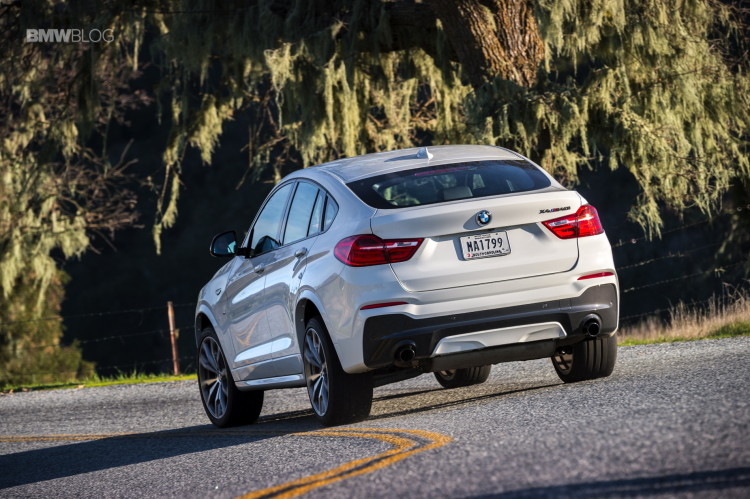 So you have this great package on paper – with lots of whistles and bells – but does that translate into a satisfying driving experience?

TACKLING BACK ROADS WITH EASE 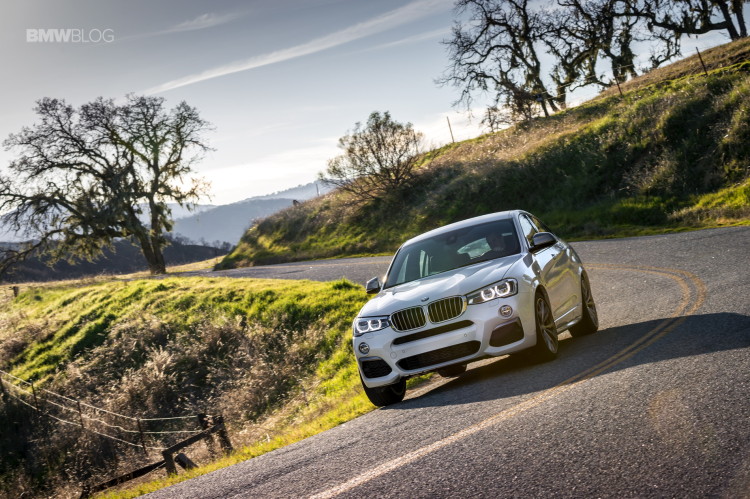 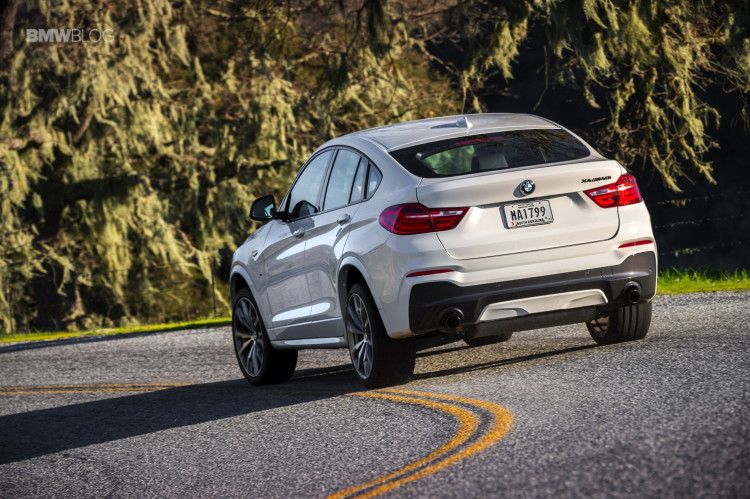 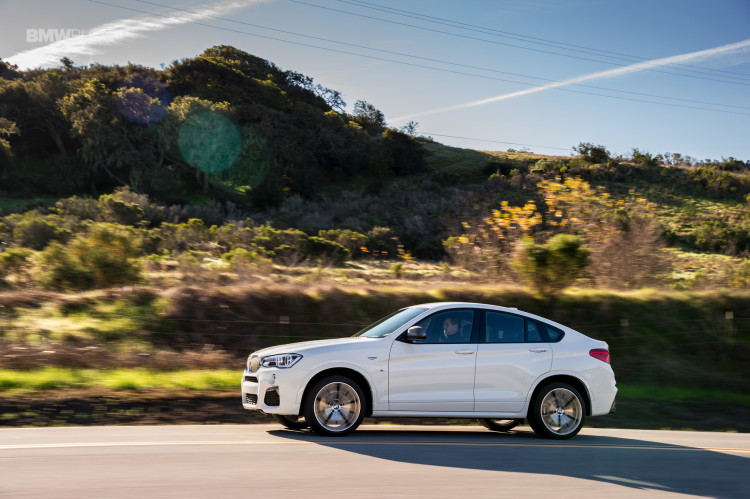 While we wish BMW let us throw the X4 onto Laguna Seca, the back roads around Carmel Valley and Pacific Coast Highway are not too shabby either. Coming from a morning and afternoon spent in the M2, the X4 M40i was exactly what we needed – a calmer ride on straight lines, but rewarding in tight corners.

The X4 xDrive35i was already a fun car to drive and for many, it’s more engine than needed. But the M40i takes those dynamics to a new level. The sharp acceleration off the line, the spontaneity of the eight-speed automatic and the growl sound coming of the exhaust – and a bit from the speakers – make this compact crossover a hoot to drive. 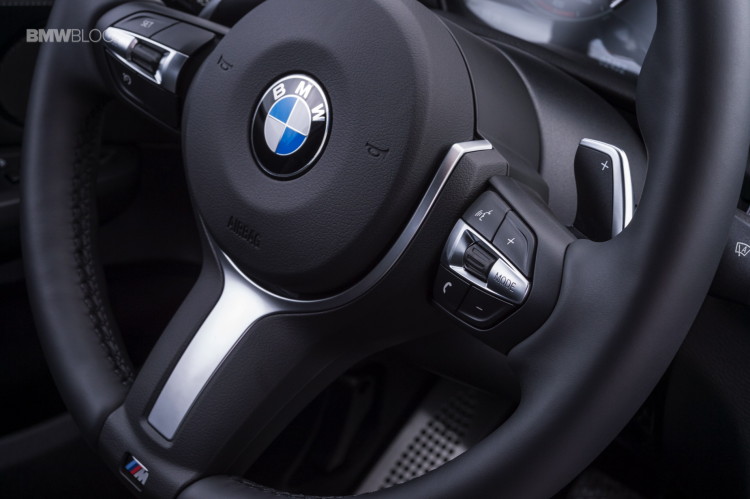 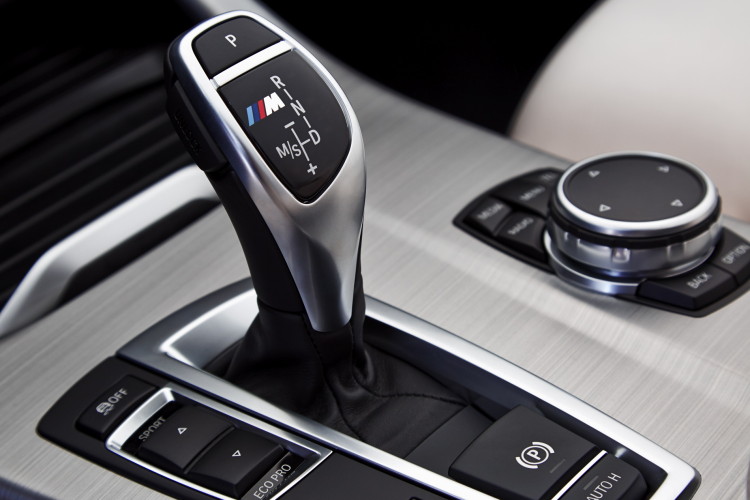 While the engine impresses, it’s the automatic gearbox that really steals the show. Tuned by M, the box delivers rapid and precise shifts, either in full automatic mode or via the shift paddles, allowing the engine to open up when the gas pedal is pushed hard onto the floor.

Couple that with the Sport+ dynamic mode – the only mode an true enthusiast should ever use – and the X4 M40i makes you forget for a second that you’re sitting so high off the ground.

The xDrive system has been recalibrated with more power routed to the rear wheels during normal operation, but just in case you oversteer in a corner, the system quickly recalculates the road conditions and plants the car back on its four feet.

The driving experience can be further enhanced by activating the manual mode with the car delivering even faster changes under load and moving quickly to its redline. 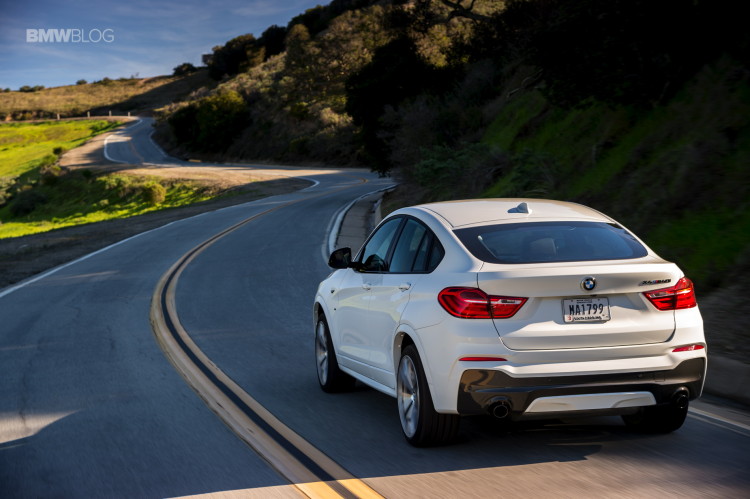 We’ve talked earlier about the electro-assisted steering – likely one of the hottest topics in the BMW world in the last few years – and we can confidently say that it has come a long way. From the time the F10 5 Series hit the market in 2011 until now, the BMW wizards in Munich have worked hard to improve the responsiveness of the steering and to deliver that great road feedback we all got spoiled by in the E-Series models. Is it an M2 feedback? No! Is it better than the standard X4? Without a doubt!

The driving experience can be further enhanced by activating the manual mode with the car delivering even faster changes under load and moving quickly to its redline.

Thanks to its fairly compact dimensions – when compared to the X6 – the added camber up front provides more eager turn-in characteristics – which once again – would have been perfect to test on the track. 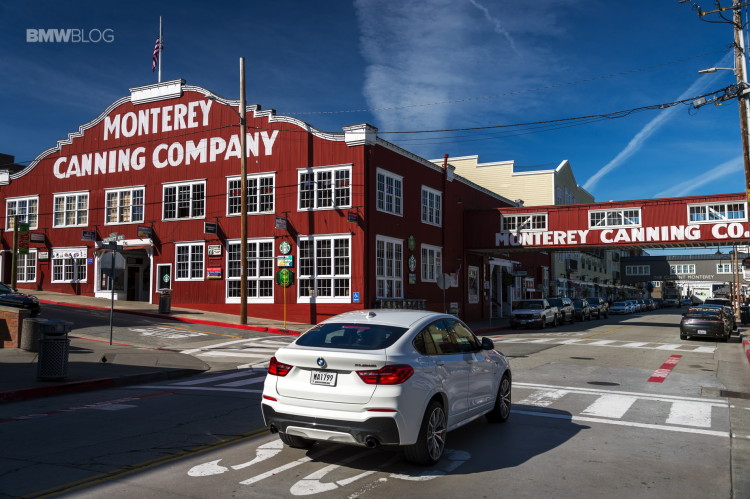 In traffic and around town, the X4 M40i can be run in Comfort mode which delivers exactly what you would expect – a domesticated, calm and soothing SUV experience. 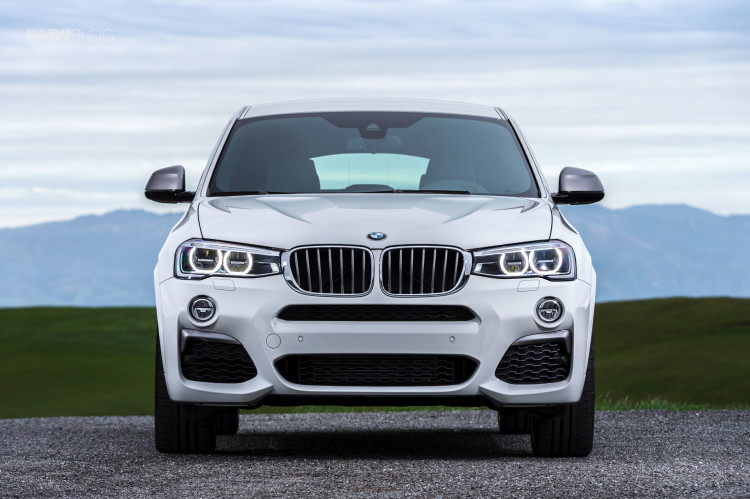 It’s not easy to position the X4 in the lineup. On one hand you have the 28i entry-level – which is the perfect balance between power, fuel consumption and price – and on the other hand, the 35i which is more than competent to satisfy even the most demanding BMW fans. So where do you place the M40i then? In a niche category of cars that deliver similar performance as one of a sportscar, with the added value of an all-weather, all-wheel drive of an SUV. And the niche is getting more competitive day-after-day. The likes of Porsche Macan S, Audi SQ5 and even the GLA45 AMG are here to challenge the status quo of the X4 M40i.

If $57,800 and sporty driving from high-off-the ground sounds to you, then the 2016 BMW X4 M40i should land on your short list of sporty compact crossovers.

If $57,800 and sporty driving from high-off-the ground sounds to you, then the 2016 BMW X4 M40i should land on your short list of sporty compact crossovers.