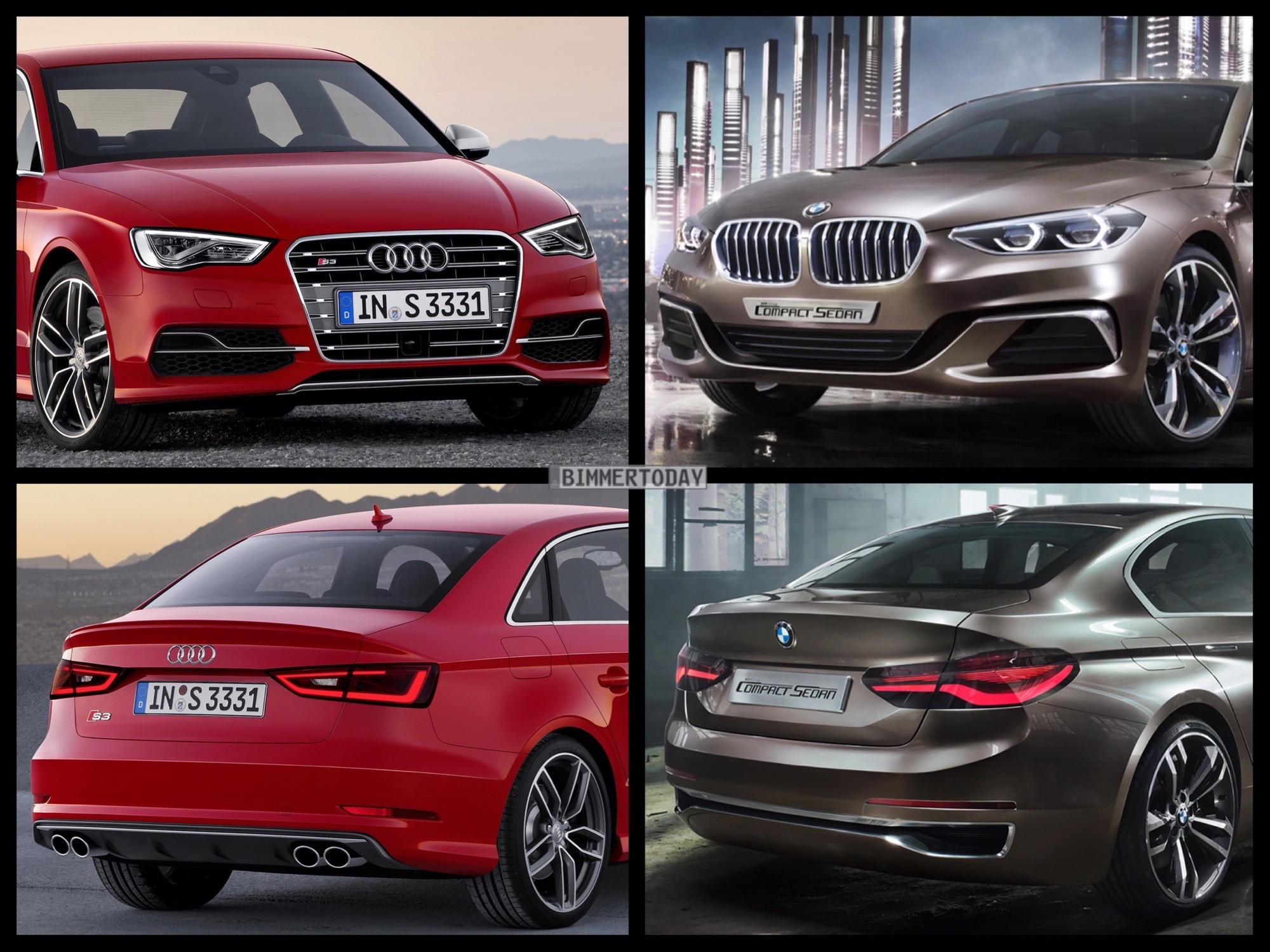 BMW recently unveiled its Compact Concept Sedan in China recently. This is most likely going to become a sort of 1 Series sedan and will first become available in the Chinese market. We’ve yet to receive word of more western markets getting such a car, but BMW hasn’t said that it won’t happen. If the 1 Series does make its way westward, though, it’s going to have to compete with the Mercedes CLA Class and Audi A3. With the A3 gaining some serious traction in the segment, it’s possible that it will be the car BMW needs to beat.

While the Mercedes-Benz CLA Class is the current sales leader in the premium compact sedan segment, it’s the Audi A3 that is slowly becoming the more popular, especially with youths. Audi’s a much more youthful brand than Mercedes-Benz is, anyway, so it’s no surprise that it will start doing better in a segment designed to attract youthful buyers. These two cars are very similar and are becoming very successful in the segment. Which is exactly why BMW wants to get into it. 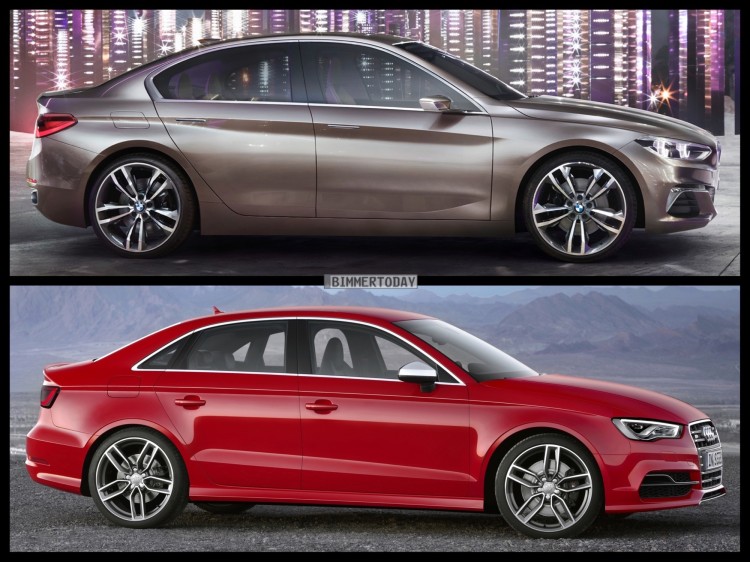 The Audi A3 is more or less a posh Volkswagen Jetta. Built on Volkswagen’s compact MQB platform, the A3 starts life a $30,000 but uses a Volkswagen Jetta powertrain at that price. With front-wheel drive and either a manual or a CVT, the Audi A3 isn’t very exciting at its most basic. It even looks a bit bland and milquetoast at that price point. However, step up to a more premium variant and it starts to look more like an Audi than a Volkswagen.

The shape is typical Audi, in that it’s a bit boring, and it wears the corporate face and tail of every other Audi. Basically, if you’ve seen nearly any other Audi product, you’ve seen an A3. That’s not to say it’s bad looking, though. It’s actually a decently handsome car and is far better looking than the Salvador Dali-inspired Mercedes CLA Class. Especially if equipped nicely, the Audi A3 can become a mature and premium looking compact car that looks and feels more upscale than it is. 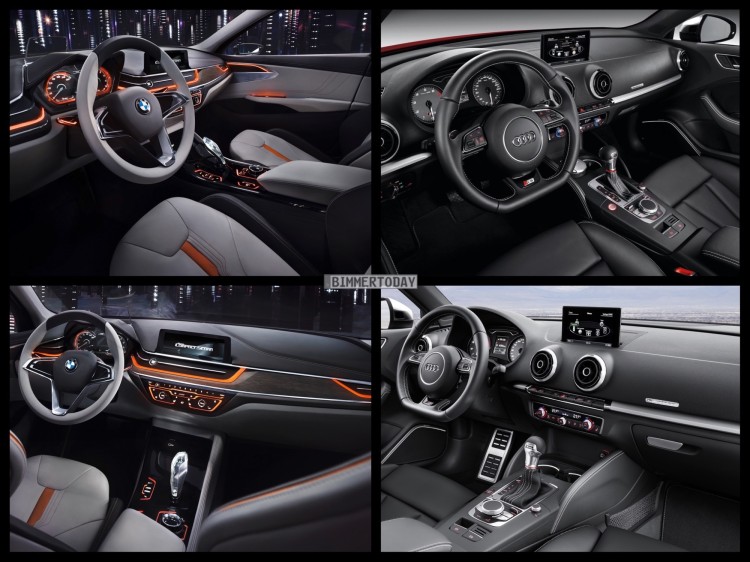 On the inside, it’s much of the same. While not Earth-shattering, the Audi A3’s interior is a nice place to sit, with decent materials for the segment and a simple but ergonomic and classy design. It won’t blow you away, but it won’t offend you either. Things get a bit saucier with the S3 model, but even still, there’s not much excitement there. I do like the simple two-circle air vents on the dash and the way the center stack is laid out. It’s very simple, very easy to use, very German. I just wish there was a bit more to look at.

The BMW 1 Series certainly has the Audi A3 beat, in terms of their exteriors. It’s a far more interesting design, with more curves and shapes. It doesn’t look like it was designed by math, like the A3 does. The BMW 1 Series is far more muscular looking and would no way be mistaken for a lesser brand. One of the stand out exterior features, at least for me, is the integration of a bit of a duck-tail spoiler in the trunk lid. It gives the 1 Series a more aggressive look. The headlights are also an interesting take on BMW’s famous twin-circle design. They are “sawed-off” now and point inward toward the kidney grilles, giving it a bit of an angry face. I can see where an M Sport model could really work. Plus, there’s also the much loved Hoffmeister Kink and rear-driven looks that are typical of BMWs.

The interior is the same, in the fact that it’s more interesting than the Audi A3’s. While this is just a concept and the interior will likely look quite different once production comes, this concept gives us a taste of the overall design. There are elements of the brand-new BMW 7 Series in the center stack and interior trim and the interior seems to be more driver-focused than the A3’s. I also love the integration of the ambient lighting, it really sets it apart from the A3. 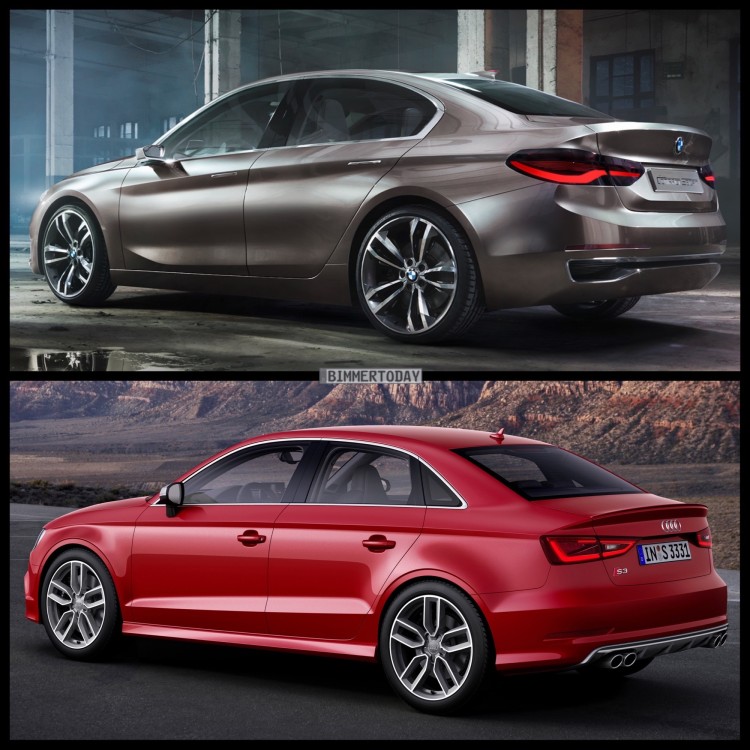 Overall, the upcoming BMW 1 Series looks as if it could be the best looking car, inside and out, in the segment. What kind of powetrain it uses and whether or not it’s front-wheel drive or rear-wheel drive is still unknown. But we do know that it will be one helluva good looking car when it finally debuts.