BMW recently announced its newest entry to the M Division family, the BMW M2. It’s going to become the main competitor to the Audi RS3, so it’s worth taking a look at how the two stack up in terms of both performance and design.

We already know much about the Audi RS3, as it’s been on sale for some time now. Its 2.5 liter turbocharged five-cylinder engine makes 367 horsepower and is paired to a seven-speed S-Tronic dual-clutch gearbox which powers all four wheels and get rocket the RS3 from 0-60 mph in 3.9 seconds. In comparison, the BMW M2 uses a 3.0 liter turbocharged inline-six engine to produce 370 horsepower and is mated to a seven-speed dual-clutch transmission, but only powers the rear wheels and gets from 0-60 in a BMW-claimed 4.3 seconds.

The BMW M2 has a bigger engine, slightly more power and a similar gearbox, but loses a step to the RS3, in terms of performance, due to the lack of grip from its two wheels. Audi’s Quattro all-wheel drive setup allows the RS3 to launch harder out of the hole without spinning its tires.

In terms of handling, we know that the RS3 is very good to drive, if a bit safe. The RS3’s incredible all-wheel drive system works brilliantly in bad weather, but on dry pavement can tend to understeer and feel a bit less dynamic that one might want. The BMW M2 is lighter and rear-wheel drive, so it’s likely that it could be the more fun and slidable car of the two, however it might struggle in the wet to the Audi RS3. But we won’t know how they stack up, in terms of handling, until we can get our hands on an M2.

In terms of exterior design, there’s a lot more visual emotion in the design of the BMW M2. Its aggressive wheel arches, massive front air dams and rear diffuser give the M2 a very aggressive and exciting look. The Audi RS3 is a bit more reserved and doesn’t do much to differentiate itself from the standard A3. While still good looking, the RS3’s styling is a bit too safe. The M2 is all flair and drama, whereas the RS3 is a bit more reserved and laid back. This is likely to translate to the way both cars drive as well. But the massive differences in design style are neither good nor bad, but different. Some may like the more reserved and grown-up quality of the RS3’s styling while some may prefer the visual excitement of the M2. 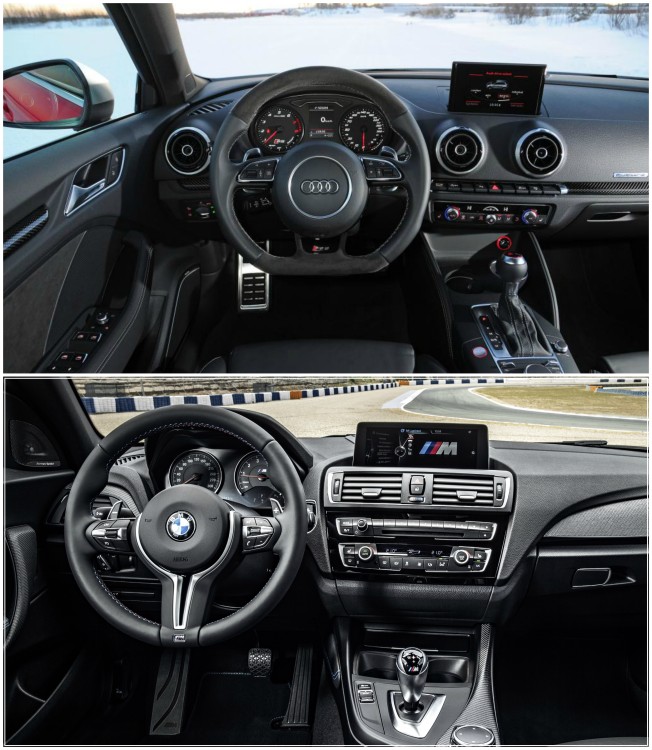 On the inside, things are actually quite the opposite. The BMW M2’s interior does little to differentiate itself from the standard 2 Series. In fact, the steering wheel, seats and overall design are the exact same as in the BMW M235i. Only the interior trim and shift knob are really different from the standard car. But the RS3’s interior quite a bit different from the standard A3. The seats are more aggressive and sporty, the steering wheel is flat-bottomed and comes with alcantara on the top and bottom of it. The interior of the RS3 also looks a bit more premium than that of the BMW M2’s, and in cars costing as much as these two, premium feel is important.

Both of these cars look great and special in their own ways but they most definitely have their own character. These two might be competitors but they go about it very differently. We’ll see which is better when we can drive them back to back, but until then we can just get excited about these two similar but different performance juggernauts battling it out.