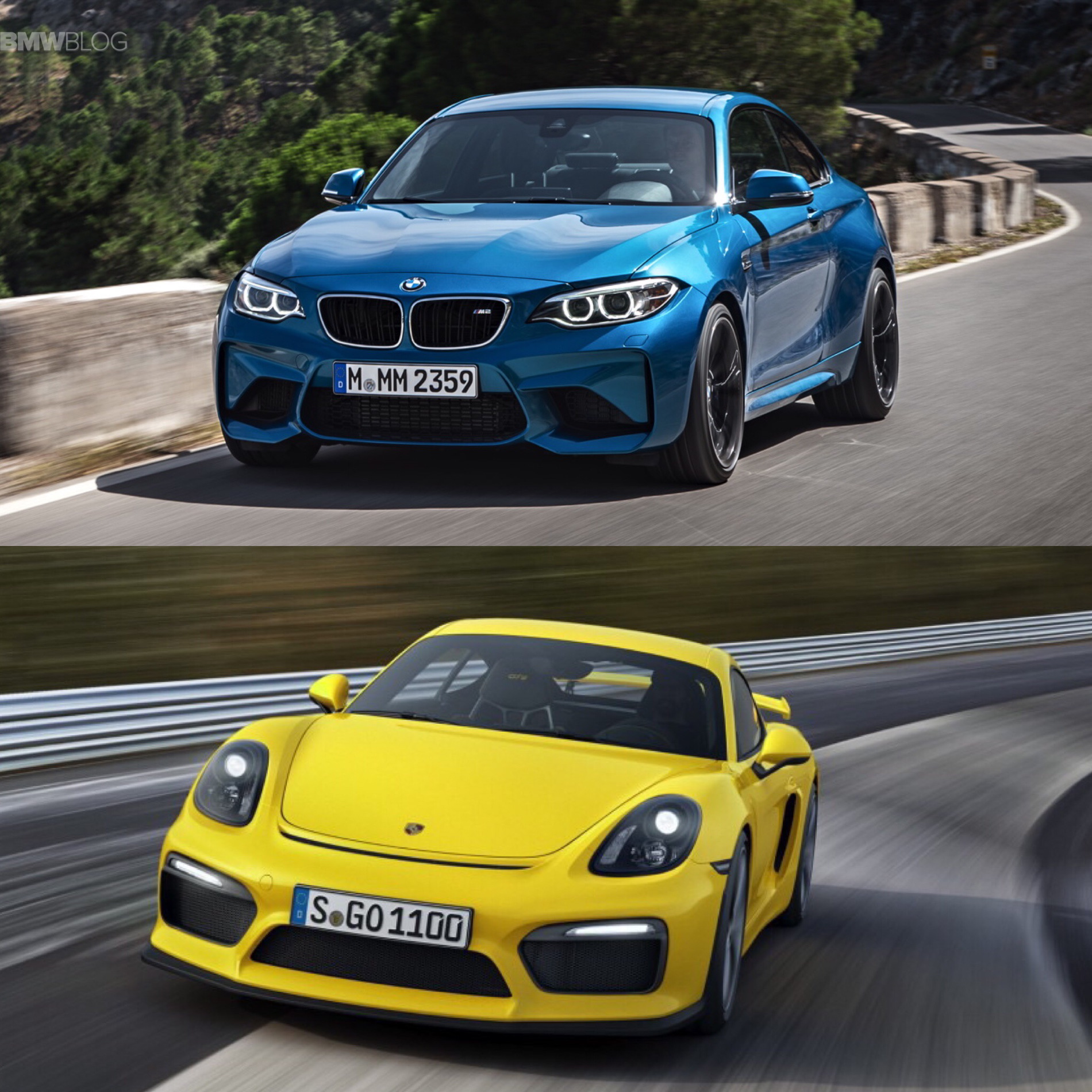 The M2 is BMW’s latest offering from its storied M Division and could possibly overtake its iconic M3 as the enthusiasts favorite BMW. Porsche has a similar car among its ranks, the Cayman GT4, which has won over the hearts of Porsche enthusiasts from the iconic 911. So both of these cars are similar in that they’re both newcomers to their respective brands and they’re both set to become favorites.

However, on paper, the two cars couldn’t be more different. The Porsche Cayman GT4 is mid-engined, whereas the BMW M2 is front-engined. They both use six-cylinder engines, but the M2 has BMW’s typical inline arrangement while Porsche uses its classic horizontally-opposed setup. 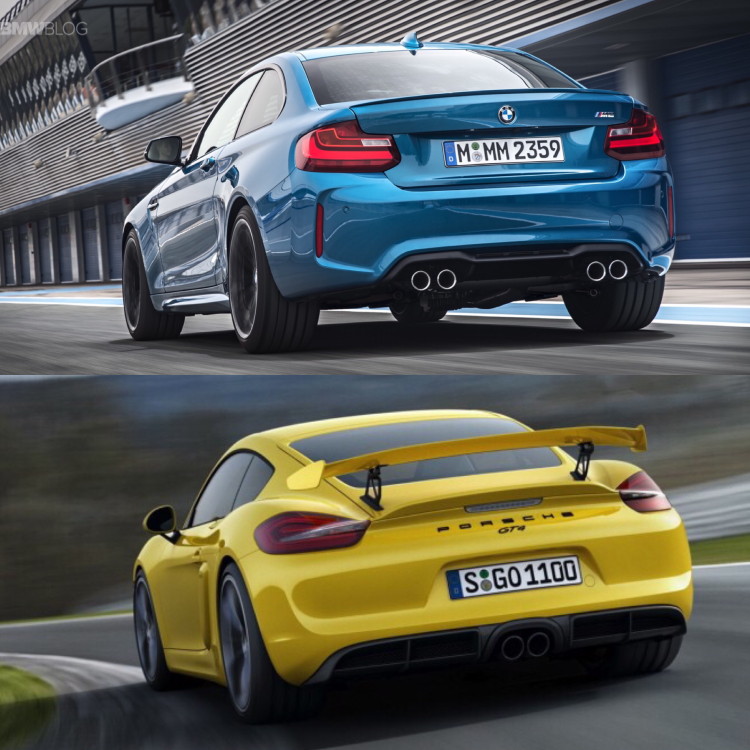 BMW’s engine also only displaces 3.0 liters and is turbocharged, while the Porsche’s is bigger, at 3.8 liters, and breathes free of forced induction. Both are available with a manual transmission, but the BMW M2 has the option of a dual-clutch gearbox, while the Cayman can not be had with anything less than three pedals. So these cars are very different in their approach, despite their sibling killing similarities. However, they do share the same goal, to put gigantic grins on the people sitting inside of them. 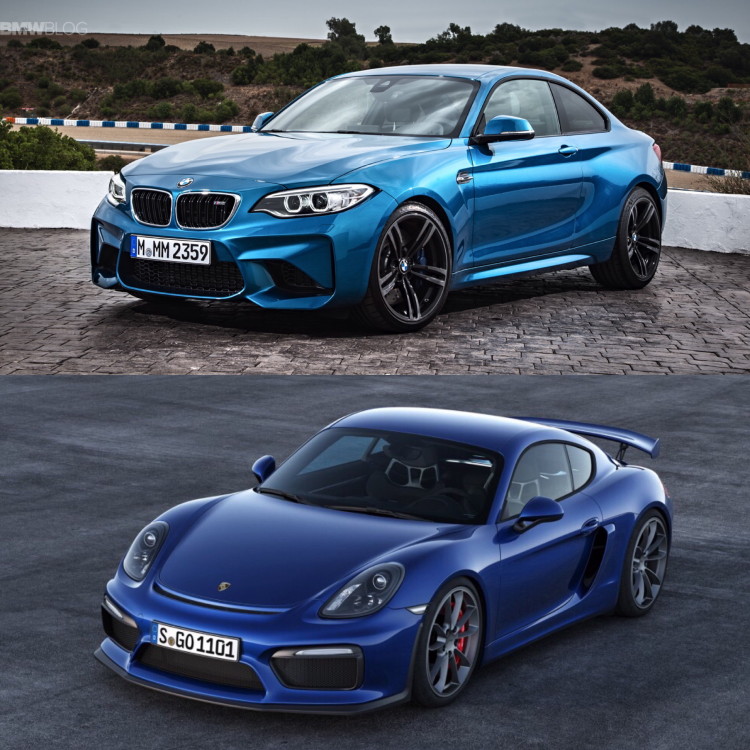 The Cayman GT4 is the hottest Cayman to be released and uses the 3.8 liter flat-six engine from the 911. That 911 engine produces a healthy 385 hp, revs out to a snarling 7,800 rpm and is paired to the aforementioned six-speed manual transmission. But this isn’t just a hot-rod Cayman with a bigger engine. Oh, no. It has chassis and suspension bits from the 911 GT3 and much improved aerodynamics. That aerodynamic kit adds a fixed carbon fiber wing that provides real downforce, added active engine and transmission mounts make the drivetrain stiffen up during hard cornering to improve rigidity and the chassis and steering parts pulled from the 911 GT3 all make the Cayman GT4 handle as sharply as a surgeons scalpel.

The BMW M2 does things a bit differently. It’s turbocharged 3.0 liter I6 engine produces 370 hp, revs to 7,000 rpm and can be mated to either a six-speed manual or seven-speed DCT. The M2 also comes with quite a bit of clever M stuff to differentiate it from its lowly M235i sibling. The chassis and suspension have been upgraded with quite a bit of aluminum and the suspension and steering components have been changed to allow for sharper handling. An Active M Differential has been fitted as standard, as well. The BMW M2 should be the sharpest driving BMW of all. 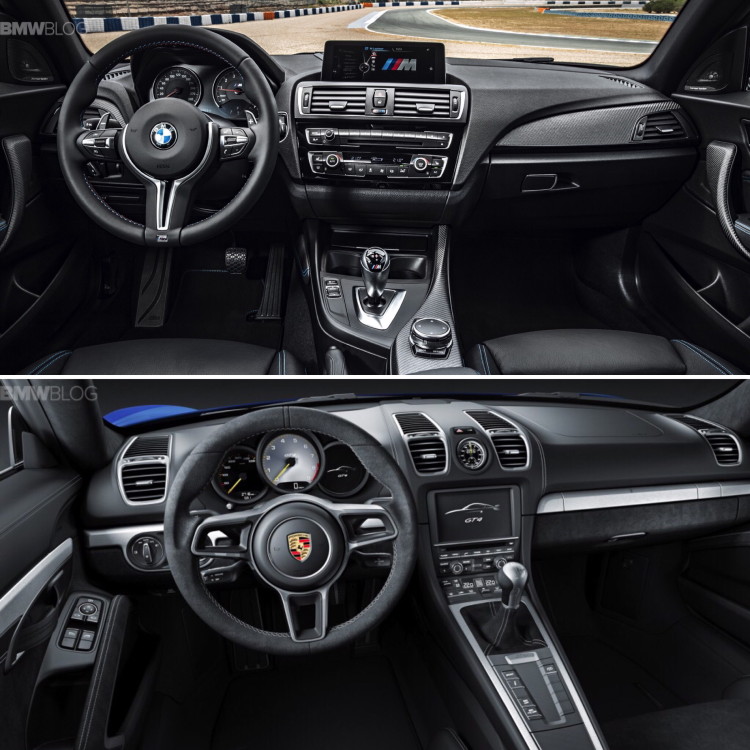 In terms of performance, both cars are pretty equal to each other. Porsche rates its Cayman GT4 at doing the sprint from 0-60 mph in 4.2 seconds, which is probably pretty accurate. BMW rates its M2 at 4.3 seconds for the same sprint, but we are guessing that it’s a bit quicker than that, as BMW is usually quite conservative with its performance figures. With 3,296 lbs for the M2 and about 3,100 lbs for the Cayman GT4, the M2 clearly loses the loss weight challenge. The GT4 is going to be the faster car, as it’s both more powerful and lighter, but the M2 makes its power way earlier in the rev range and has a flatter torque curve, thanks to its turbocharged engine. So while the very high-tech and sophisticated Cayman GT4 should be faster than the M2, it won’t be by much.

Handling and fun-factor might differentiate these two cars, though. The GT4 is designed to be a precision tool of the highest caliber. It uses race-bred suspension and chassis components, has a lightweight and stripped out interior, has active engine and transmission mounts and has its engine mounted in the middle. The M2 also has quite a bit of aluminum in its suspension and chassis, has a fancy differential and race-bred technology, so it should be interesting to see how well the M2 can stack up to the GT4. 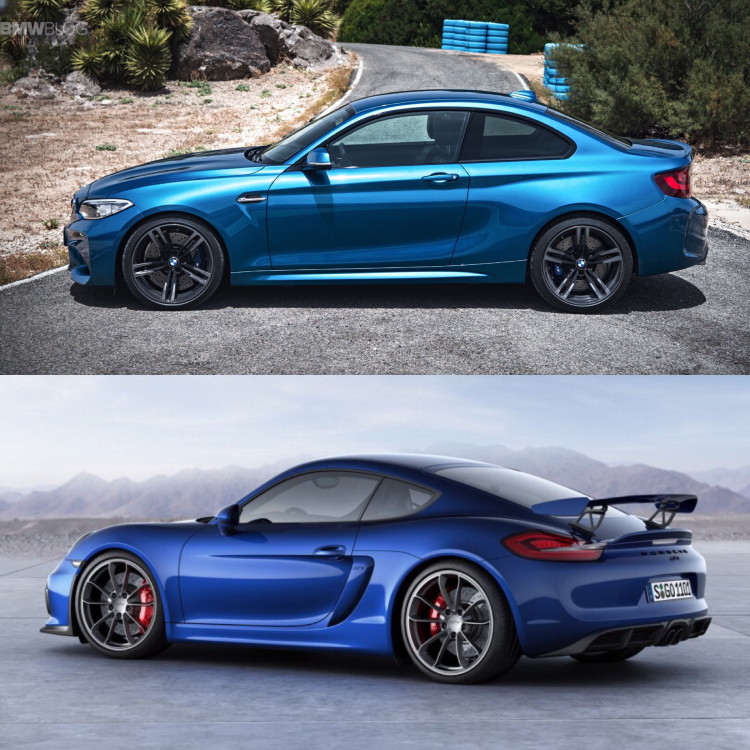 An M2 CSL would certainly be a stronger opponent for the GT4, but for now, a lightweight M2 remains a fantasy.