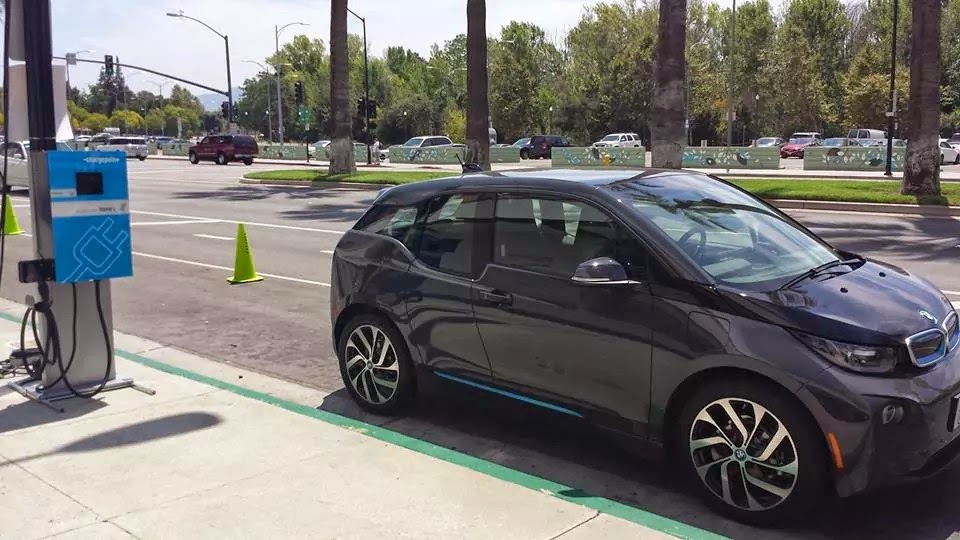 With the proliferation of electric vehicles like the i3, the absence of a robust fast charge infrastructure becomes more and more difficult to ignore. There are indeed areas of California which are served very well with DC Fast Charge stations, however for many EV owners outside California, Fast charge stations are something they only dream about. Georgia however, has been making some great progress with DCFC. Georgia resident and i3 owner Chris Campbell tells us what’s happening with DC Fast Charge in the Peach State.

You may remember Chris from a post he made here last year. Chris was the very first Chevy Volt owner in Georgia back in 2010. He authored a guest blog post here telling his story and why he had decided to get a BMW i3 when he turned in his Volt. Many i3 purchases have come from buyers which were early adopters and had leased an early Volt or LEAF. Chris has been active in the Atlanta area’s EV scene for a while and maintains a website full of EV information, which can be found here: www.http://electrifyatlanta.com 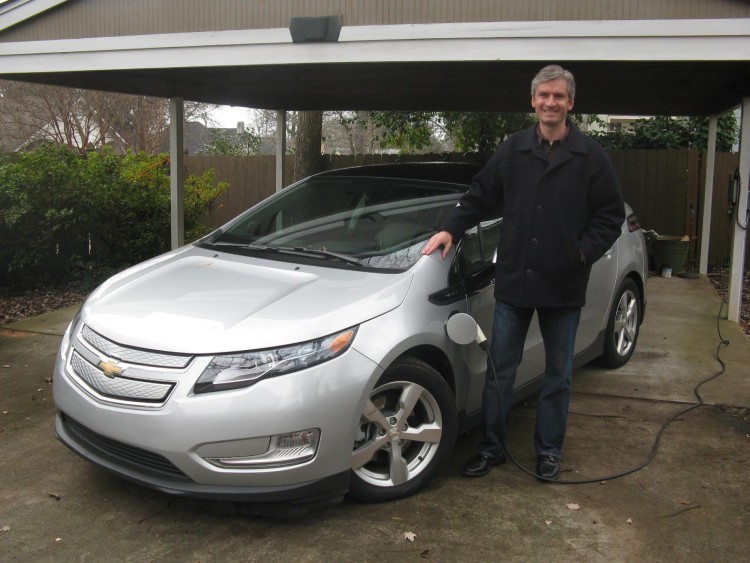 For over a decade, Georgia has offered a generous $5,000 tax credit in support of getting an electric vehicle (EV). But only in the last three to four years has the market offered affordable cars with usable range, and suddenly huge numbers of Georgians have taken advantage of that incentive. In the last session, the state legislature took notice of this growth and killed the tax credit altogether, with it officially ending this month. June 30th is the last day that Georgians can get an EV (purchased or leased) and still be able to claim the credit when filing taxes next year.

So there is now one last mad rush to take advantage of one of the best EV incentives in the country. Potential EV owners are making their final decisions and dealers are scrambling to respond to demand and maintain inventory.

The Nissan Leaf, by far the highest volume EV in the Georgia market, continues to dominate sales, but the BMW i3 has also enjoyed success in the Atlanta market, as illustrated by this “heat map” showing locations where owners voluntarily listed themselves on the i3 owner map. Atlanta is a true hotspot for EV ownership, and has an active i3 owner group!

Besides the state tax credit, however, there has been another factor energizing EV uptake in Georgia: a large and accelerating roll out of DC Fast Charging (DCFC) stations. The first DCFC stations (CHAdeMO for Leafs) arrived in north Georgia in July 2013 via The EV Project (aka Blink), but the CHAdeMO rollout really accelerated in November 2014 when NRG entered the Atlanta market with their EVGO CHAdeMO stations. As of this writing there are now over 30 CHAdeMO stations in the metro Atlanta region, with another dozen expected online in June.

Of course, as most EV owners know, there is not just one DCFC plug standard — there are three! In 2008, before the current wave of EVs, the automakers all (except for Tesla) agreed on a Level 2 standard, the J1772 plug that is now familiar to all EV owners. But they did not come to an agreement on DCFC (sometimes inaccurately called Level 3), and so the EV market split into three camps:

Since that market split, the three different camps have proceeded with their respective DCFC station rollouts, with Chademo and Tesla fighting for the lead and SAE Combo in a distant third. However, we have started to see “dual standard” DCFC stations hit the worldwide market, offering both CHAdeMO and SAE Combo. While these stations do not directly support the Tesla interface, Tesla owners can now buy a $450 adapter from Tesla Motors, that lets them charge from CHAdeMO stations. So these dual-standard stations effectively support all three standards. Of course Tesla cars have far larger batteries, offer far more range, and typically take advantage of their own network of ultra-fast DCFC stations.

The SAE Combo flavor of DCFC (compatible with the BMW i3) first appeared in Atlanta in late 2014, with a single dual-standard cabinet at a Georgia Power testing facility, unfortunately accessible during weekday business hours only. In January a second SAE Combo unit appeared at BMW NA’s offices, however that BMW-branded unit only offers 24 kW peak power. Obviously with just these two i3-compatible DCFC stations, one with limited access and the other offering low power, and both located in the same side of town, they were of limited utility to i3 owners.

It was not until this week that the true potential of the BMW i3 was realized in the north Georgia market, with a wave of SAE Combo DCFC sites going online.

Following nearly a year of planning and construction, regional electric utility Georgia Power has now launched their network of DCFC stations, which are DUAL-STANDARD. These new stations offer both CHAdeMO and SAE Combo plugs, and thus are able to charge every DCFC-capable EV in the U.S. (even the Model S via Tesla’s new adapter). Georgia Power’s DCFC sites deliver 50 kW and will offer Level 2 charging stations as well. Their network launched in May with pilot stations at 11 Georgia Power locations in 4 cities, and will expand to a total of 60 stations statewide by the end of 2016. The first wave of stations launched temporarily with only CHAdeMO capability, but on June 2nd Georgia Power finally delivered on their promise and brought their first dual-standard station online, with more expected this week.

This is just the first wave. Georgia Power plans to spend 2015 installing 25 more stations at locations around the state, and then another 25 in 2016. Some will be in metro areas, essentially serving commuters, but some will be installed along interstate corridors, serving those EV owners eager to stretch the legs of their new car. Since every one of these stations will offer dual-standard DCFC, these stations will support ALL EV owners. Atlanta-area BMW i3 owners have been straining at the leash for these stations to finally go online, and the day has now arrived.

But Georgia Power is not the only player in the market offering dual-standard charging. NRG entered the Atlanta market in November 2014 with CHAdeMO-only stations, but recently has been expanding their presence with dual-standard DCFC stations made by BTC Power. Unfortunately, while these BTC stations have internal hardware that supports both CHAdeMO and SAE Combo charging, these new stations have been popping up with the SAE Combo side disabled. It is rumored that NRG (and partner Nissan) have asked BMW to chip in on the cost of these stations. If that is indeed the case, I believe it would be wise for BMW to step up and contribute to this much needed infrastructure.

A similar situation is playing out with some state-funded stations. The Georgia Environmental Financing Authority (GEFA) is an arm of the state government that normally funds projects like water and sewer improvements, but in 2014 they announced a grant opportunity for GEFA-funded electric car charging stations at municipalities and educational institutions. Following a frenzied application window that reportedly lasted only hours before the funding was all used up, GEFA delivered on those grants in late 2014, and since then stations have been popping up in locations around the state, beyond metro Atlanta. Three of these locations are Athens, Augusta and Columbus, where GEFA-funded DCFC stations went online in April. These stations launched with only CHAdeMO capability, despite the GEFA grants specifically requiring dual-standard DCFC. Indeed the Signet hardware that was physically installed did include SAE capability, with even the cord and plug installed and ready to go, but the SAE Combo plug was disabled in software (via the Greenlots activation network). Again it appears that Nissan maneuvered to have the stations installed with SAE Combo, but with that capability disabled until BMW chipped in. Local i3 owners raised this concern with BMW via a variety of methods, and in late May, these three locations saw their SAE Combo plugs quietly get enabled. The rumor now is that this solution will soon spread to similar stations that have appeared in the Carolinas, further enabling regional travel by i3 owners. BMW of North America has made no public statements about what is going on at any of these, frustrating local i3 owners.

Georgia now boasts EIGHT different makes of DCFC station hardware, operating on six different networks (click here for details on the station hardware now operating). Thus, the state now has one of the most heterogenous DCFC station populations in the world, exceeded only by California, and certainly Georgia can be seen as a great market to evaluate DCFC developments and test car compatibility.

All of this DCFC activity, especially the SAE Combo roll out, has delighted local BMW i3 owners, who have been chomping at the bit to go on road trips in their new cars!