BMW i3: How Preconditioning Works

Home » BMW i3: How Preconditioning Works 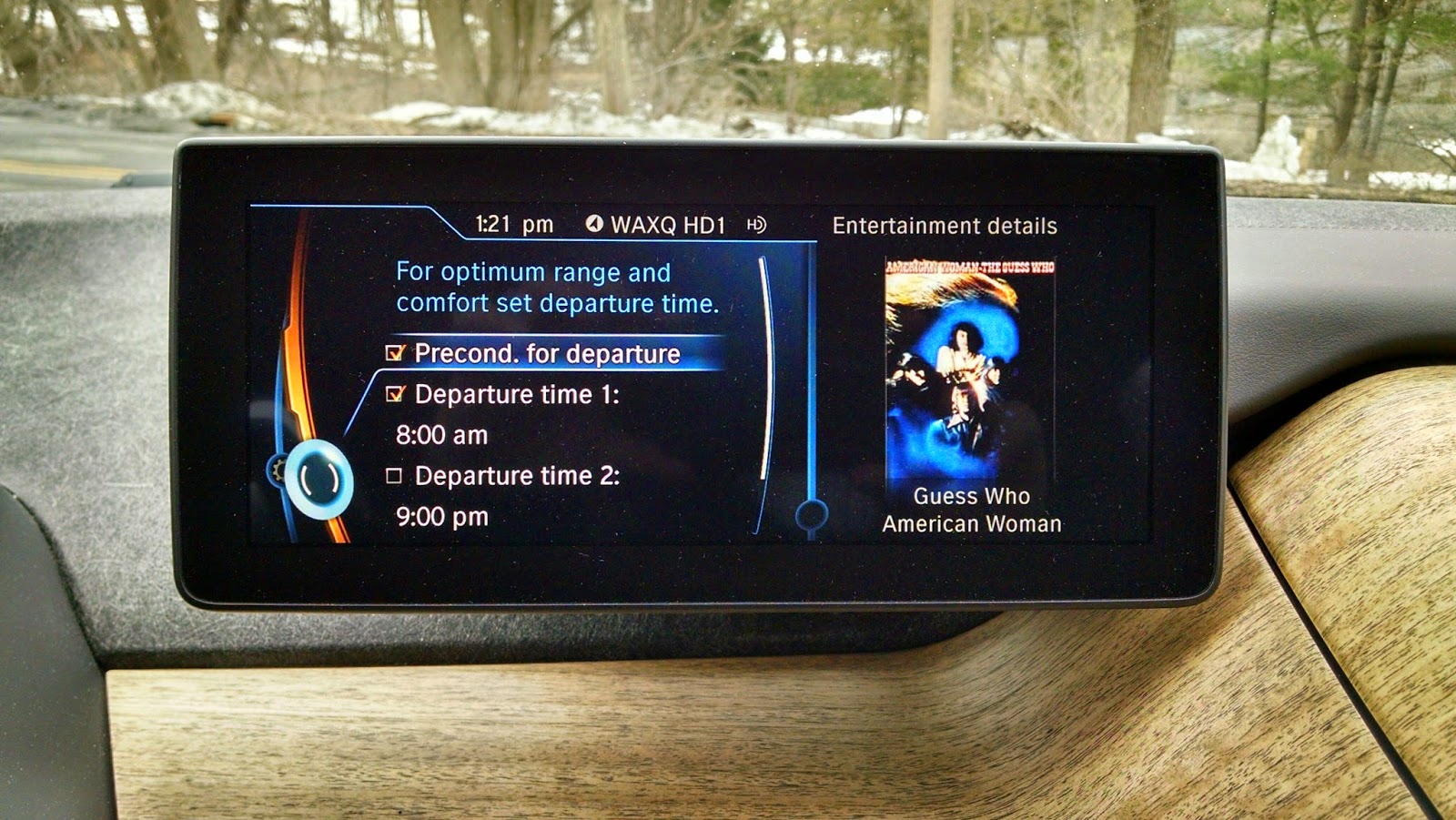 In many ways electric cars are very similar to their internal combustion counterparts and that’s by design. Most major OEMs are afraid to make something that’s “too different” from what their existing customer base is comfortable with. However there are features in electric vehicles that are indeed drastically different. The first one that comes to mind is regenerative braking which allows the electric motor to convert the vehicle’s kinetic energy back into electricity which in turn recharges the battery. This feature changes the driving dynamics of the car (some more than others depending on how aggressive the regenerative braking system is) and the operator needs to adjust to this when they first transition to an electric vehicle.

Another unique feature most modern electric vehicles have is the ability to precondition (warm or cool) the high voltage traction battery as well as the passenger cabin. This allows the driver to begin their journey with a properly heated or cooled battery and cabin, while still having the state of charge at or near 100%. Some conventional combustion cars also allow you to remotely start the vehicle to warm it up in the winter or cool it off in the summer, but the reasoning behind that is purely comfort-driven, and with EVs it goes beyond that. Since electric vehicles have shorter range and longer refueling times than their combustion counterparts, it’s important to save the energy in the battery for its main purpose; to propel the vehicle, and not waste too much of it on ancillary power draws.

Warming the battery and the cabin uses a lot of energy, and doing so while the vehicle is plugged into the main power allows the driver to begin their trip with a properly warmed battery (which will increase the range) and still have a fully charged pack. This is very important for EV owners in cold weather climates. It is also useful to cool the car in hot ambient temperatures, but more frequently used by EV owners in the cold since a cold battery can reduce its range up to 30%. A hot battery won’t reduce the car’s range, but it can have an adverse effect on the longevity of the battery cells. Therefore preconditioning the battery in very hot climates is also advised, but for different reasons than doing so in the cold.

OK, so it’s clear preconditioning is useful, but do you really know how it works on your i3? I’m afraid most i3 owners don’t. In fact, judging by how many people have messaged me this winter asking for help with preconditioning, I’m thinking it’s right up there with how to properly care for their battery as the top misunderstood items of i3 ownership. This is all new stuff, and even most dealers don’t know all of the answers so it’s no surprise the customers are a bit confused. This post should clear the air on most questions about how preconditioning works on your i3. I knew how most of the i3’s preconditioning worked, but just to make sure I didn’t have anything confused, I reached out to BMW’s top electric vehicle technical services manager in the US to get answers to direct questions that I had previously received from readers:
Q. When Preconditioning via the iRemote app Remote Control menu is activated, only the cabin is preconditioned, not the battery, correct?

A. When triggering Preconditioning from the Remote Control menu, the answer is Yes, only the cabin.

Q. If you want to precondition the battery from the app, you need to set the departure time and then enable “preconditioning for departure,” correct?

A. Yes, provided the departure time programmed is at least 3 hours from the time when it is selected.
*Important: This is a very important fact that most i3 owners are not aware of. If you don’t set the departure time at least three hours in advance the car is not performing battery preconditioning at all, only the cabin will be preconditioned.

Q. Can you precondition the battery without the vehicle being plugged in?
A. The HV battery, no. The cabin, yes.

Q. Can you precondition the battery while the vehicle is plugged into a 120v source or does it need to be connected to a 240v source?
A. 120V (Level 1/OUC) or 240V (Level 2) have the same effect in terms of Preconditioning. However, if charging on Level 1, the preconditioning consumption is higher than the charge rate, therefore potentially the vehicle will not be fully charged at the departure time.

Q. How about if it gets critically hot – over 105 degrees?
A. If the battery temperature is higher than the optimal operating range and preconditioning is activated, the battery can be cooled. This is not very common due to the fact that the battery is such a high thermal mass, is located close to the ground, and is not exposed to direct sunlight.

Q. Why is it that sometimes after preconditioning (plugged in) the car is left at 97% or 98% SOC? Why doesn’t it fully recharge the car to 100%?
A. When preconditioning using a Level 1 charger, the car will always be below 100%. It could be about 80% or lower.(Because it uses more energy than the 120v source can provide) When using a Level 2 charger, the SOC could be slightly under 100% as the vehicle electrical load stays somewhat constant while the charger will switch off and on.

Q. Will battery cooling occur automatically while you are driving when the battery temp exceeds a certain set point?

When battery preconditioning is being performed, what is the battery temperature that the vehicle is attempting to achieve?
A. The battery is warmed or cooled to bring it close to or within the optimal operating range of 25-40C (77-104F)
I’m certain that the vast majority of i3 owners are not aware that the car does not initiate battery preconditioning unless they set the departure time at least three hours in advance. Also, based on feedback I’ve received here, many i3 owners aren’t aware that they aren’t preconditioning the battery if they initiate precon by pressing the small fan icon at the bottom of the main state of charge screen on their iRemote app. By doing so, that only initiates cabin warming or cooling. In order to precondition the battery as well as the cabin from the app, you must set a departure time at least three hours in advance and then slide the preconditioning tab to “on.” Don’t feel bad if you own an i3 and didn’t know  all this, most client advisers at many BMW dealerships don’t know it either. It’s a little confusing at first, and honestly I think the app could be made a little more intuitive, but once you understand how it works, it’s easy to set. You can also set the departure times and precon from the iDrive in the car itself but you need to first set a departure time and activate Low Cost Charging (Even if you don’t actually use TOU low cost charging).

Using the “Activate Climate Control” app feature on the left only preconditions the cabin. To precondition the battery as well as the cabin, use the “set departure time” feature which is accessed by pressing the small clock tab on the top right of the state of charge display screen. Once you set the departure time, you also need to slide the precondition tab to the “on” position.

Living in northern New Jersey I get to experience a range of temperature extremes and using the preconditioning feature is definitely helpful. We just finished the coldest month I can ever remember and it seemed just about every day I was leaving the house in the morning with temperatures in single digits or below zero. One day it was actually minus eleven degrees Fahrenheit when I began my morning drive. Even though my car is parked inside my garage, when it’s this cold the battery temperature drops to levels that severely impact its performance and the range is reduced. I noticed I could add as much as eight to ten miles to my range if I used the preconditioning on the coldest days. It’s also nice to get into a warm car, and this enables you to turn down the cabin heat a bit, which additionally helps extend the range. I found that if I allowed the preconditioning to warm the cabin, I could then lower the cabin heat, or even turn it off for a while and just use the heated seats which use much less energy than the cabin heater.

I hope this helps i3 owners understand a little more about preconditioning. If you have more questions, please leave them below in the comments section and I’ll do my best to answer them.