BMWBLOG has had our BMW i3 BEV (Battery Electric Vehicle) right at four months now and the futuristic electric car just turned 4,000 miles.

I was a bit concerned that being an “early adopter” of all the i3’s new tech could be problematic or even glitchy. That wasn’t the case. Apart from one flat tire caused by running over a huge bolt, the BMW i3 has been flawless. The i3 is the first mass production car with extensive use of carbon fiber reinforced plastic and it’s BMW’s first production electric car.

In my opinion, a big part of the i3 being almost flawless out of the box was due to the extensive testing of the MINI E and the ActiveE.

The dreaded electric car range anxiety issue was the other thing lurking in my mind while signing the lease papers. Now, customers can choose an i3 Range Extender and nip that anxiety in the bud. However, we wanted to go all in on the pure electric car ownership experiences.

BMW states that the i3 BEV and its 22 kWh battery pack are good for 80 to 110 miles. The Range Extender is good for about 150 miles but you can stop, fill up the 2.4 gallon gas tank and truck on. At home, Level 2 charging has been easy, we just plug it in and charge it over night.

The i3 requires the driver to do a bit more thinking and planning. By that I mean, every time I get in it, I look at range, figure out our route and then take off. If going on a new route, I have taken to plotting out the day’s activities on Google maps to ensure I am not going to go over 80 miles.

Given I live in the Midwest and we don’t have many public chargers here, this route plotting is a necessity. There are just forty EV chargers in 7,950 square miles of Kansas City, so we don’t venture out farther than we can return on a single charge. I literally have tried only once to use a ChargePoint charging station in KC and it was broken.

We are always cognizant of the i3’s range and the miles left’ometer or as some call it a Guess-O-Meter. So far, no rides on the flat bed tow truck of shame from running out of juice.

The i Remote App

I have been really surprised by how helpful the iOS app is. Unlike the dash in the i3, the BMW i Remote app gives the actual state of charge (SOC) of the battery. Getting to work thirteen miles one way in the winter, we use about 16-18% of the battery. The return trip typically uses more more charge because the i3 can’t be plugged in at work so there is no way to pre-condition the battery pack.

The i Remote app is the easiest way to use Pre-Conditioning. Just set the time of your departure when it’s cold outside and the i3 will warm the battery pack and cabin up. The caveat is that pre-conditioning only works while attached to a Level 2 Charger. 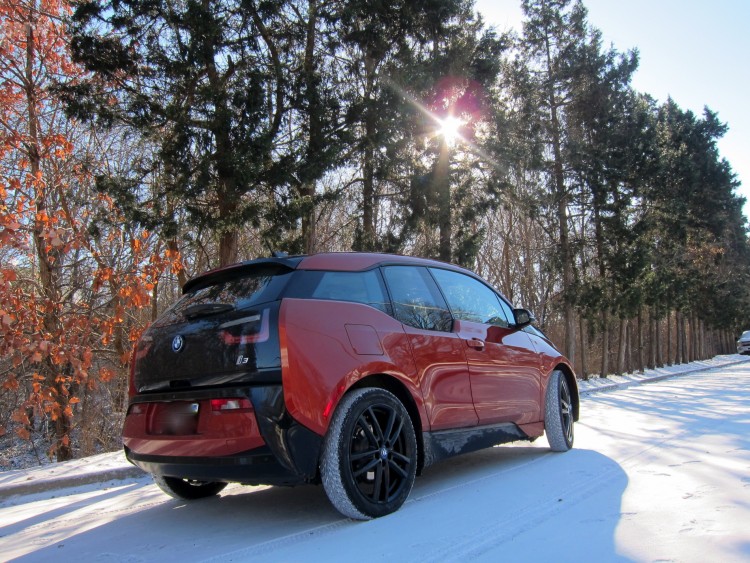 It can get seriously cold in the Midwest. Naturally, before taking ownership of the i3 I started to wonder how it would handle the snow because of its rear wheel drive platform and lightweight. We put snow tires on it and really the drivability in snow has really not been a problem. It handles like any other rear wheel drive BMW I’ve owned over the years and it’s easy to daily drive year round. To attenuate the torque curve, I set EcoPro while driving in the snow so I get less slip when accelerating. 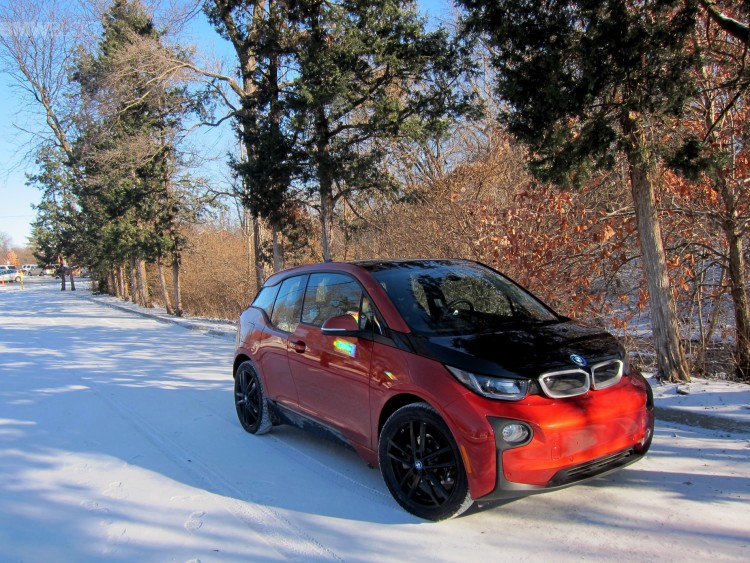 The bigger challenge in owning an i3 was how serious cold affects your range. In the coldest weather, we have experienced a 35-40% decrease in range. The i3 uses electricity to go and electricity to heat the car, and cold batteries don’t work as well. At 5F, I really wanted heat. If you can tolerate no heat, you could probably go farther. The i3’s windows also fog up easier in the really cold weather more than any other car I’ve owned.

A cool thing I noticed in the serious cold is that at a stop light there is no exhaust plume coming from the i3, unlike all the other cars around me. In the cold, the heat pump also makes a slight rattling noise from the front end and when the i3 gets left out in the cold, the steering wheel can creak.

Our i3 has taken us 4,000 trouble free miles. It transports us to and from work in the coldest weather of the year 5F (-15C), and had no problem in the snow while fitted with snow tires. It has carried our daughter’s bass without problem and made lots of trips to Costco.

We are looking forward keeping the i3 in constant motion.

Our BMW i3 has taken us 4,000 trouble free miles. It transports us to and from work in the coldest weather of the year 5F (-15C), and had no problem in the snow while fitted with snow tires.